The Railroads Survey To The Dam


Preliminary surveys for a railroad to the Grand Coulee Dam site were made in 1933 by both the Northern Pacific Railway (NP) and Great Northern Railway (GN).

The NP considered a $700,000 extension from Odair, a siding located about two miles from Coulee City, and running up the floor of the upper Grand Coulee. The GN considered extending the branch line from Mansfield. Their million-dollar extension would have gone over the plateau up near Leahy where the survey branched. One line then went down Barker Canyon to the dam site. The other went down Foster Creek to the Columbia, then down the east bank of the river to the damsite. The thinking for this longer line was it would give them not only a chance for the construction traffic, but also the future agricultural tonnage from the fertile bench lands along the river.

The GN had resurveyed the Mansfield extension, and had the means to start construction at a moment's notice, if it received the go-ahead. It had previously surveyed to the river in 1909.
Senator Clarence Dill had asked the NP to build to the dam, though he knew of the readiness of the GN.

A further plan, which was announced at a joint conference in Coulee City in September 1933, stated that both roads would build a joint line up the floor of the coulee. If this were to happen, the GN would use the Washington Central branch (an NP line) from Adrian to Coulee City, where the new line to the dam site would start.

The NP extension was seen as satisfactory; consequently, they applied for a permit to build. The permit was granted by the Interstate Commerce Commission on February 13, 1934; however, when the NP asked for exclusive franchise rights, they were denied by the State Department of Public Works, and so then the NP abandoned the project, but knew it would still retain the bulk of the traffic to be handed off at Odair.

Thereafter the Government decided to built its own railroad, and immediately engaged the NP to locate a line from Odair to the head of the Grand Coulee, this being substantially the same route which that company had formerly located.

The GN came to an agreement with the NP to simply allow an exchange of loads at Adrian, freshening an old agreement dating back to 1903.

The location survey was completed in May, and thereafter all engineering work was transferred to the Bureau of Reclamation. Two engineering sections were established, No. 1 covering the first seventeen miles and No. 2 the last eleven miles. A contract for construction of the railroad was awarded to David H. Ryan, who started work on August 9, 1934, and thereafter the section engineers with their field surveying crews were in constant service on the railroad project. Considerable surveying was involved on Section No. 2 in mapping lands at the railroad terminus which were to be used for storage yards and a proposed steel-rolling site.

Newspaper clipping showing the general layout of the GN vs NP lines and their proposed extensions to the dam. 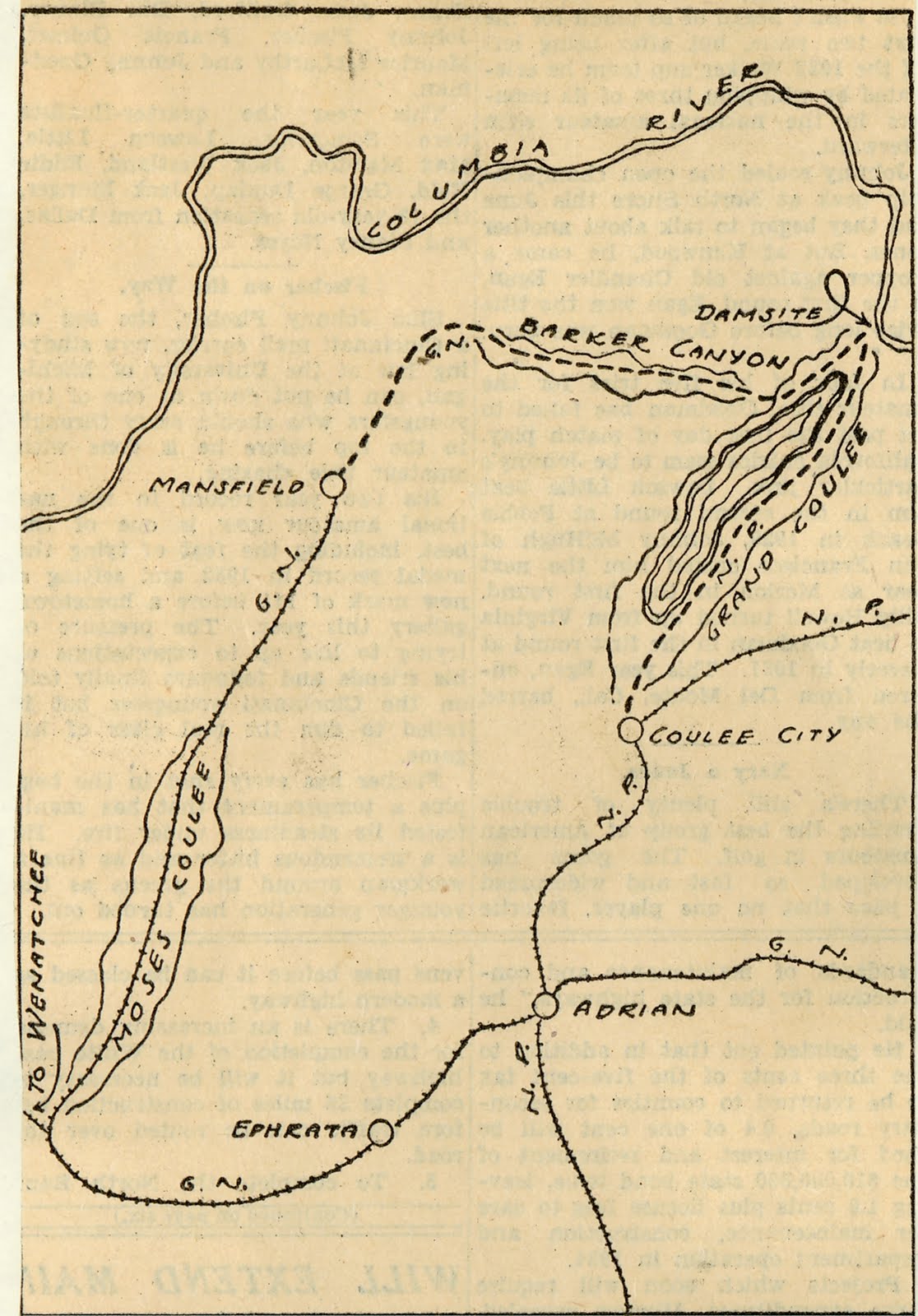 Final construction of the line to the dam, as surveyed by the NP and built by government contractor. 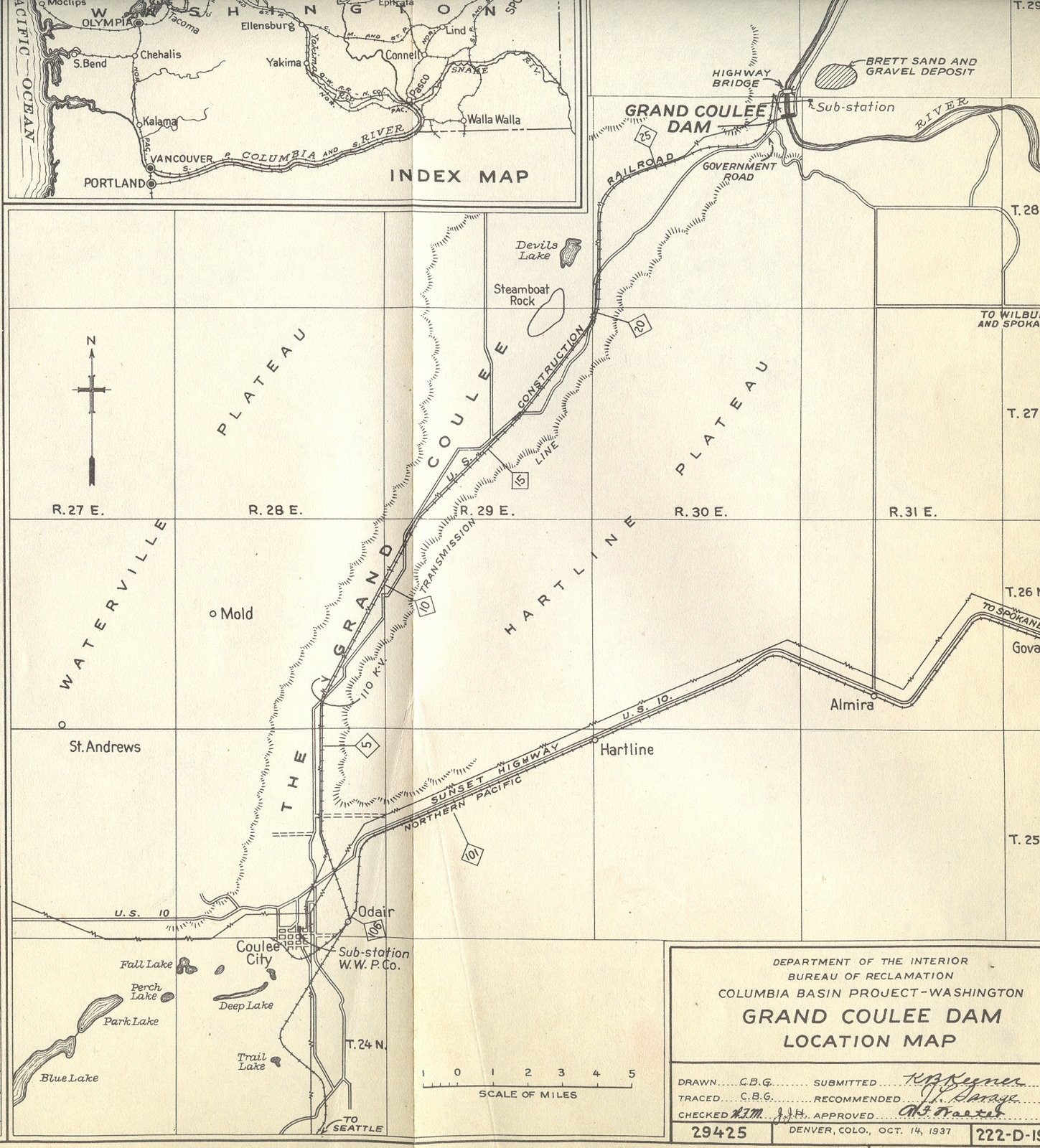 Older map showing the 1909 GN line surveyed out to nearly Rex. The line to Leahy would have been built if the GN had been given permission, then on to the dam. 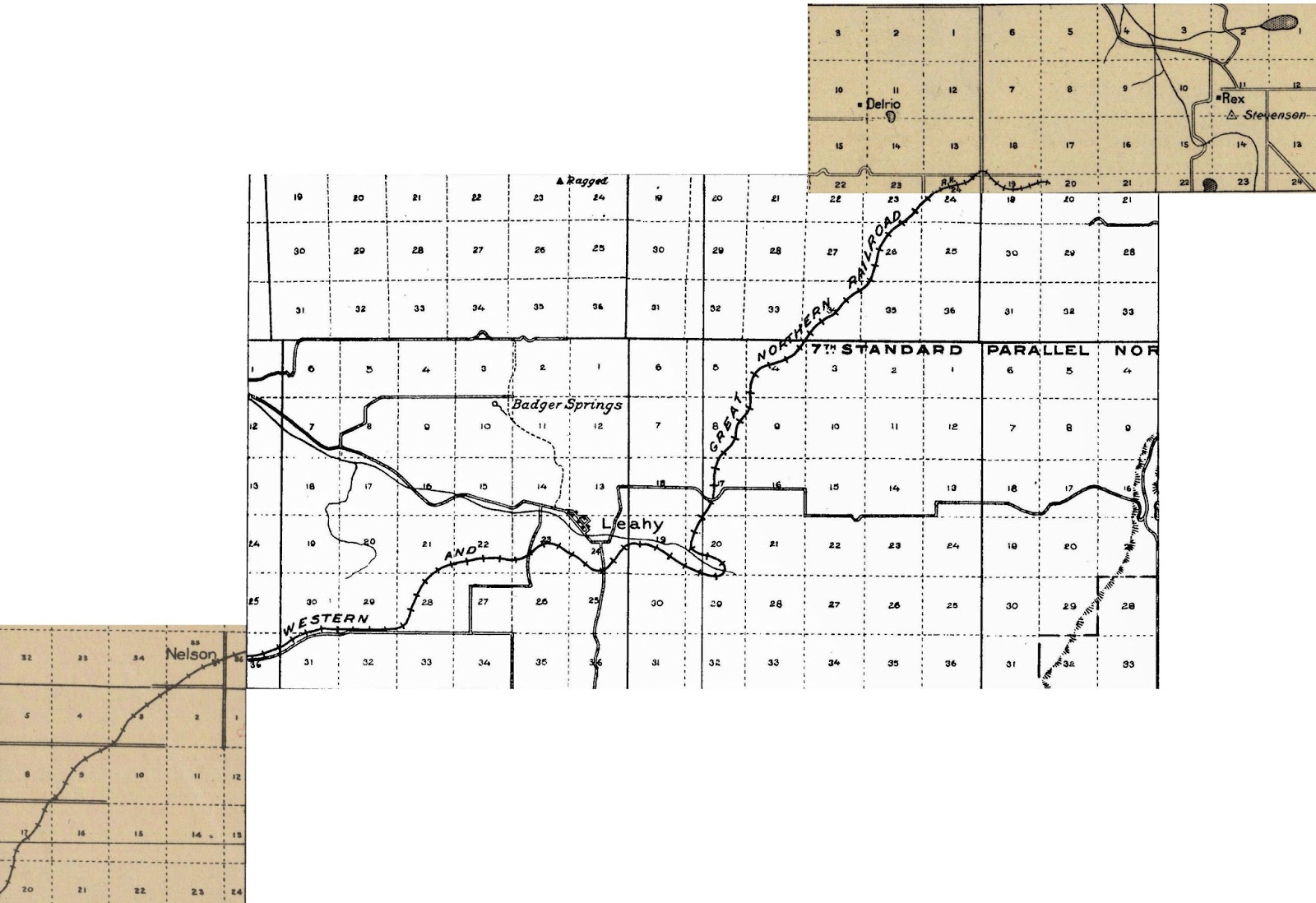