The 1650 is shown pushing two Bi-Polars into the service tracks at the Othello roundhouse.  The Bi-Polars were long-time passenger train power between Tacoma and Othello. They were noted for their pulling power and ability to run very quietly.  The photographer notes in this June 5, 1948 view that the 1650 is having engine trouble, not otherwise described. The 1650 was an EMD NW-2 1000 hp diesel switcher. They started out life in a basic black scheme but were painted into this orange and grey, with maroon stripe after a couple of years. 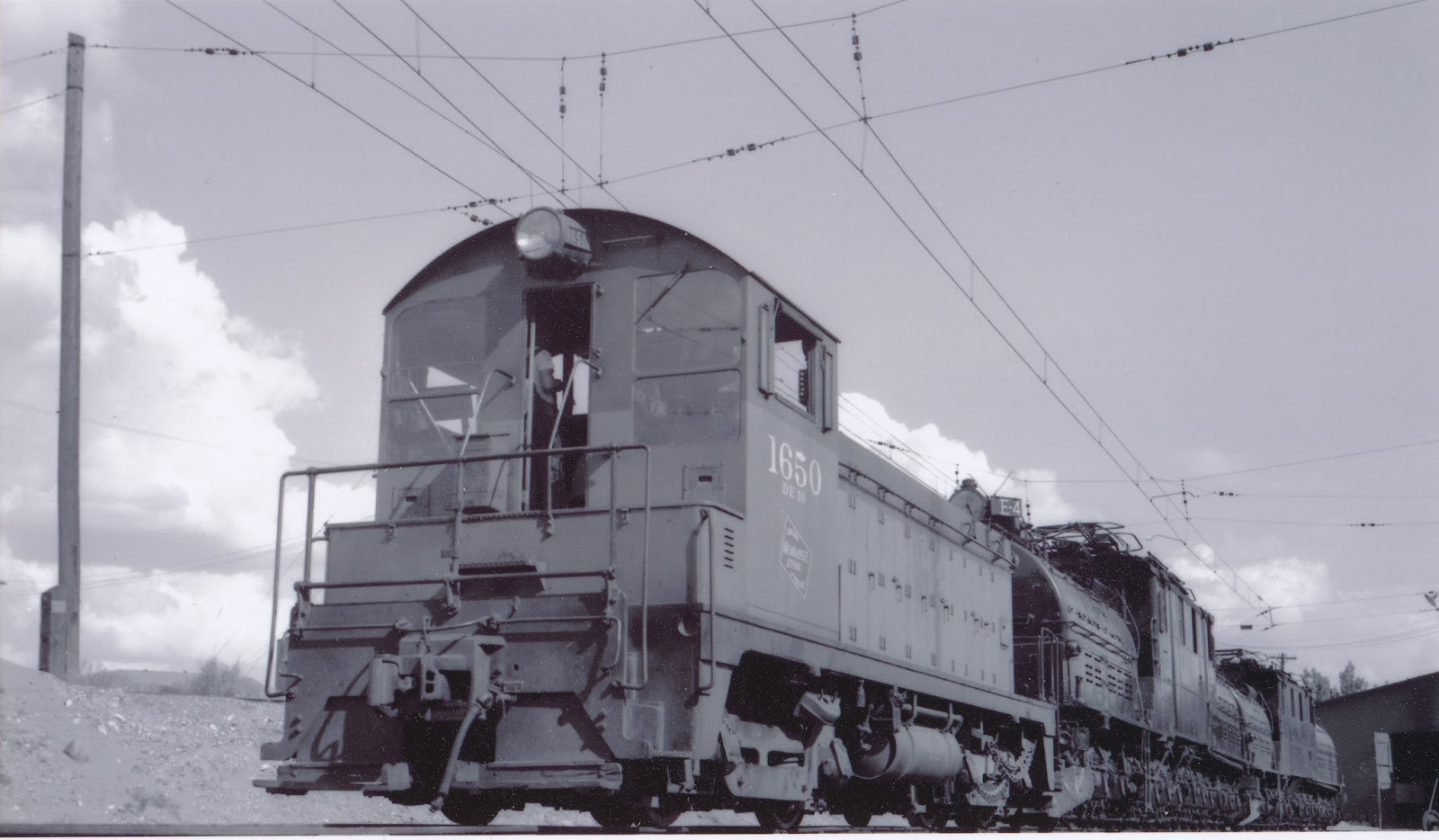 A Mrs. Young stands on the platform to place the mailbag onto it at Smyrna in 1918. Placing the mail this way allowed it to be picked up by the train without stopping. A bag would be thrown off the train in return. For a period of time, mail for Smyrna and points around it was dispatched daily except Sunday and holidays. 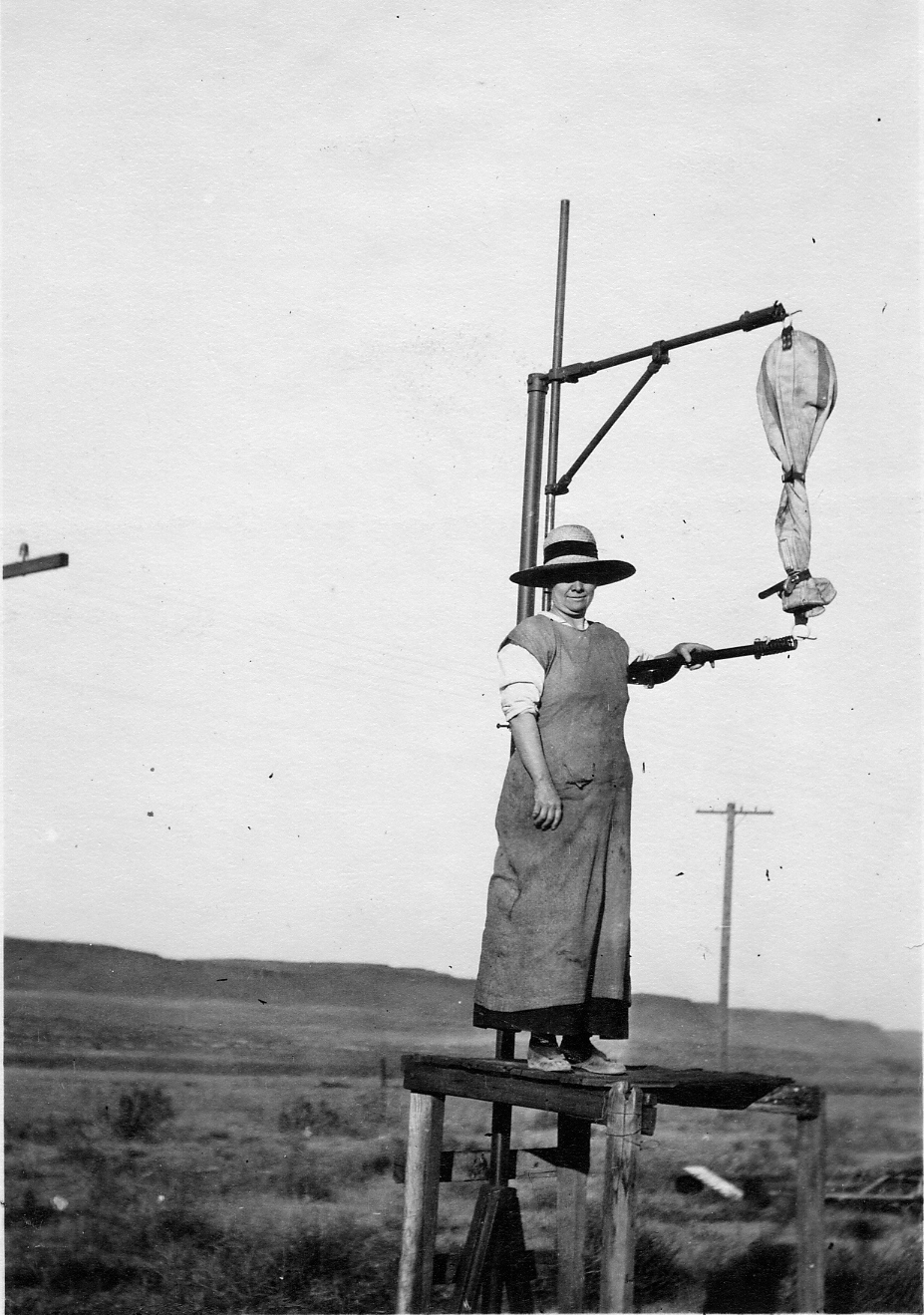 When this photo was taken in June 2009, the likelihood of seeing trains west of Othello seemed grim. The tracks were in place, as were the skeletons of the old signals. Weed and sagebrush had grown up along the rails, and nature had otherwise started to reclaim part of the line. The Port of Royal Slope, looking to restore service to Royal City from Othello took it upon themselves to clean up the tracks and fix parts of the line, and are now waiting for an operator of the line to be renamed. The skeletons of the route of the Milwaukee Road are still in place. 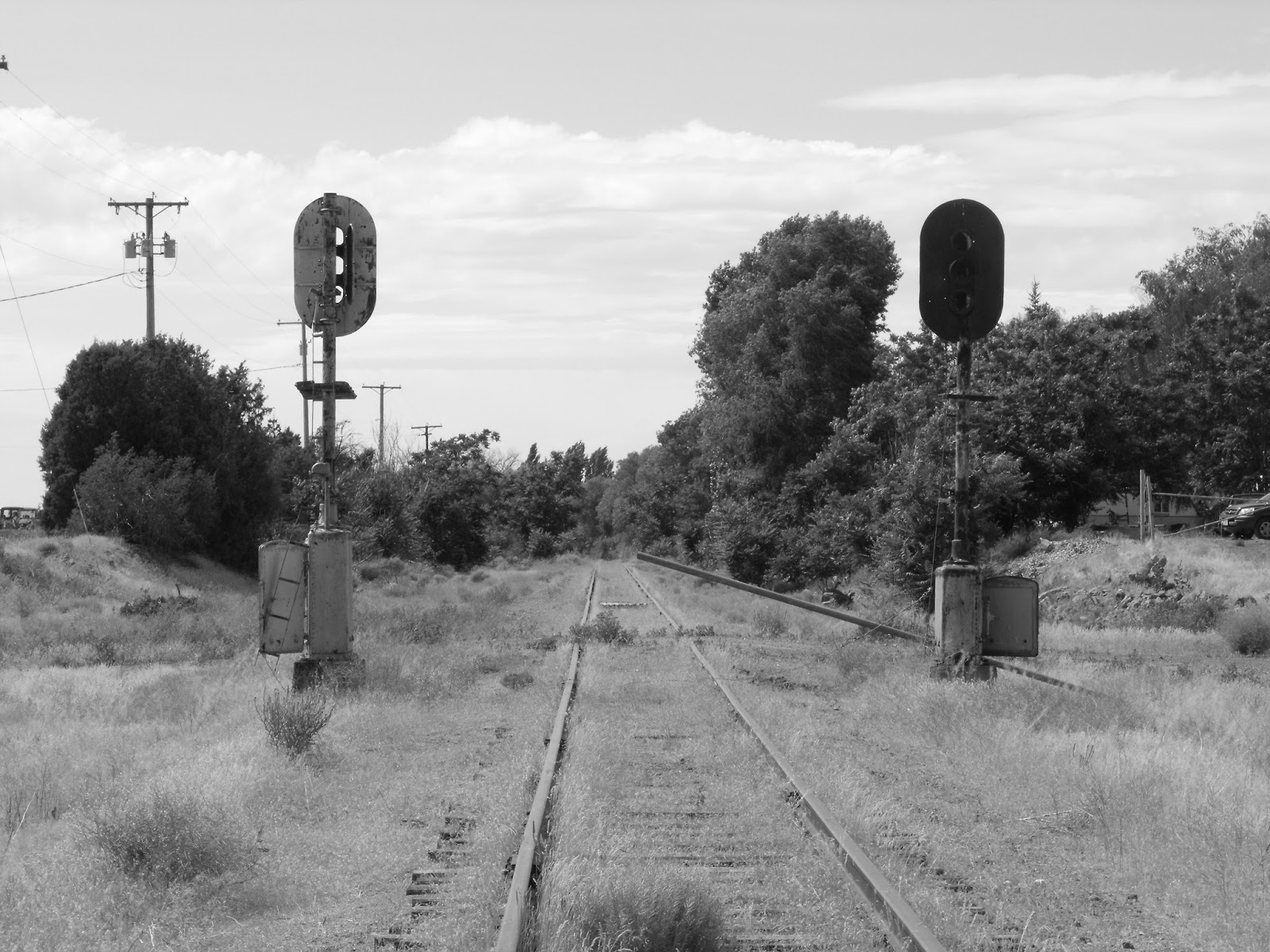 In 1980, the extra yard tracks were taken up, with the rail and the ties being salvaged for later use. A few through tracks were kept, to allow what little business there was in town to continue. Above the tracks are the remaining support for the old electrification system, last used in 1971. 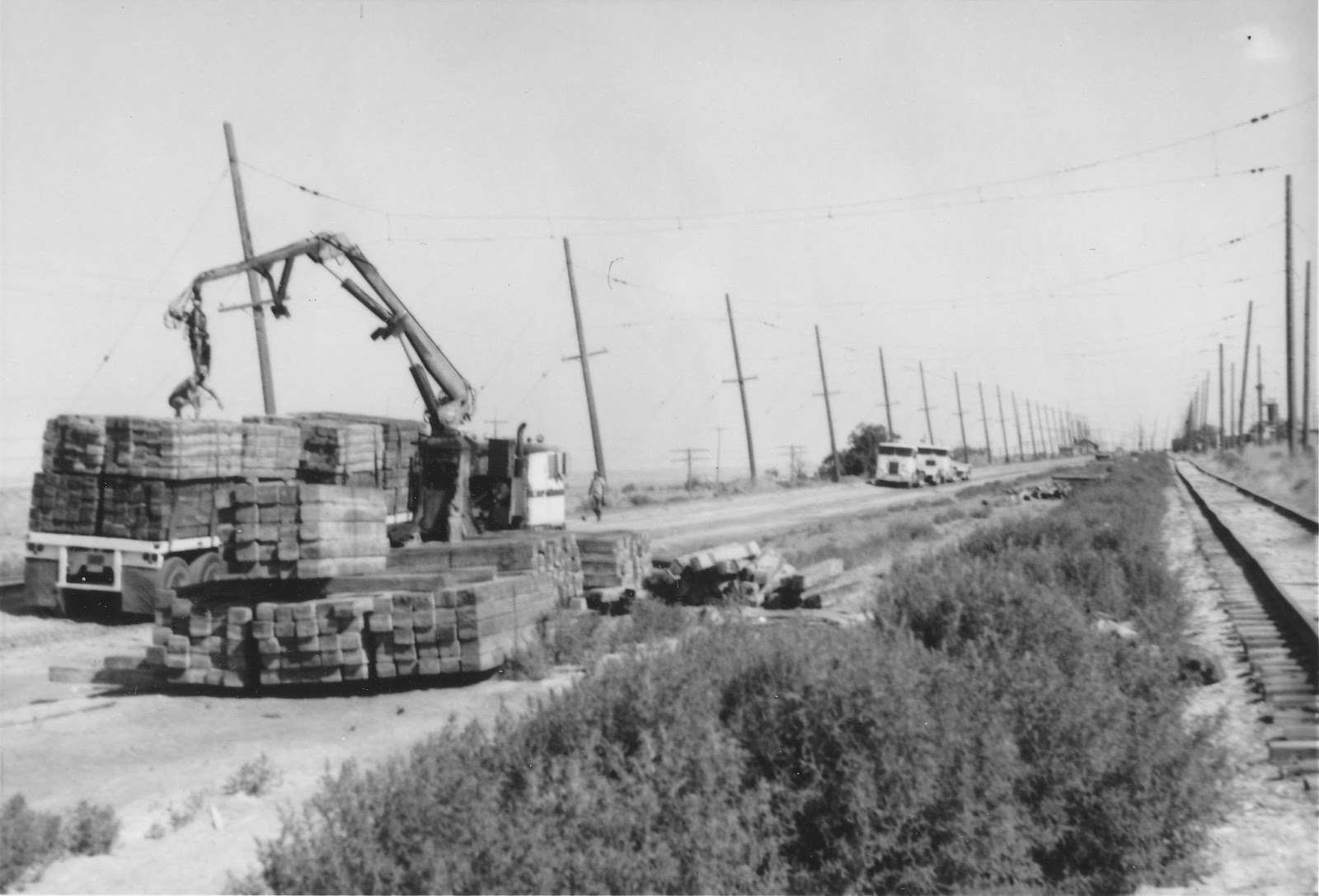 The water tank in Othello was no longer needed by the railroad or the city by the 1970s and was carefully torn down to salvage the wood.  The refrigerator cars on the track are for the frozen French fry business that boomed in Othello, and still does today. 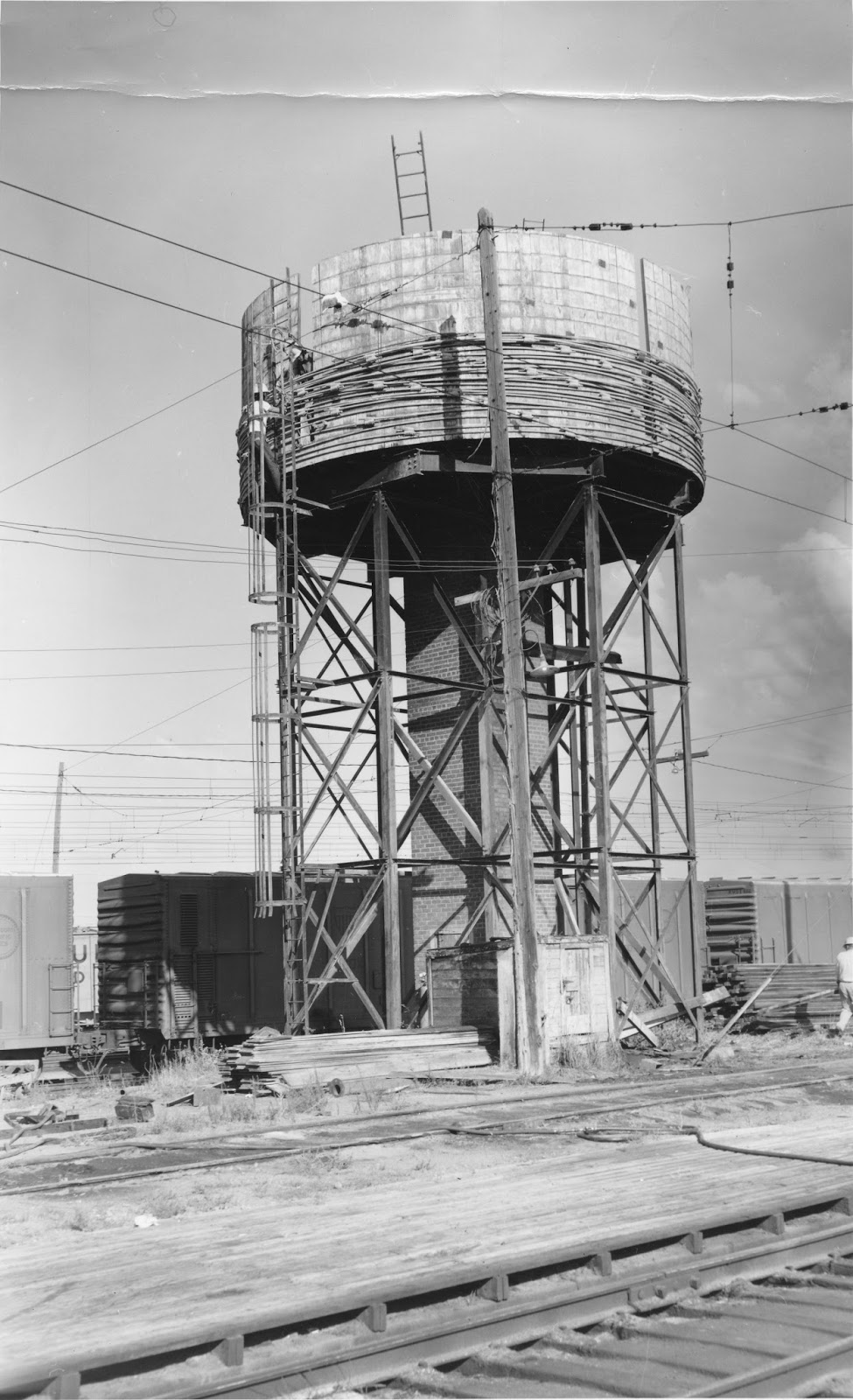 Photograph by Lylah Hodson; courtesy of the Othello Community Museum.

The roundhouse in Othello caught fire in 1919 after the July 4 baseball game in town. The building was a total loss, as were 8 steam engines. The roundhouse was rebuilt as a wood building. 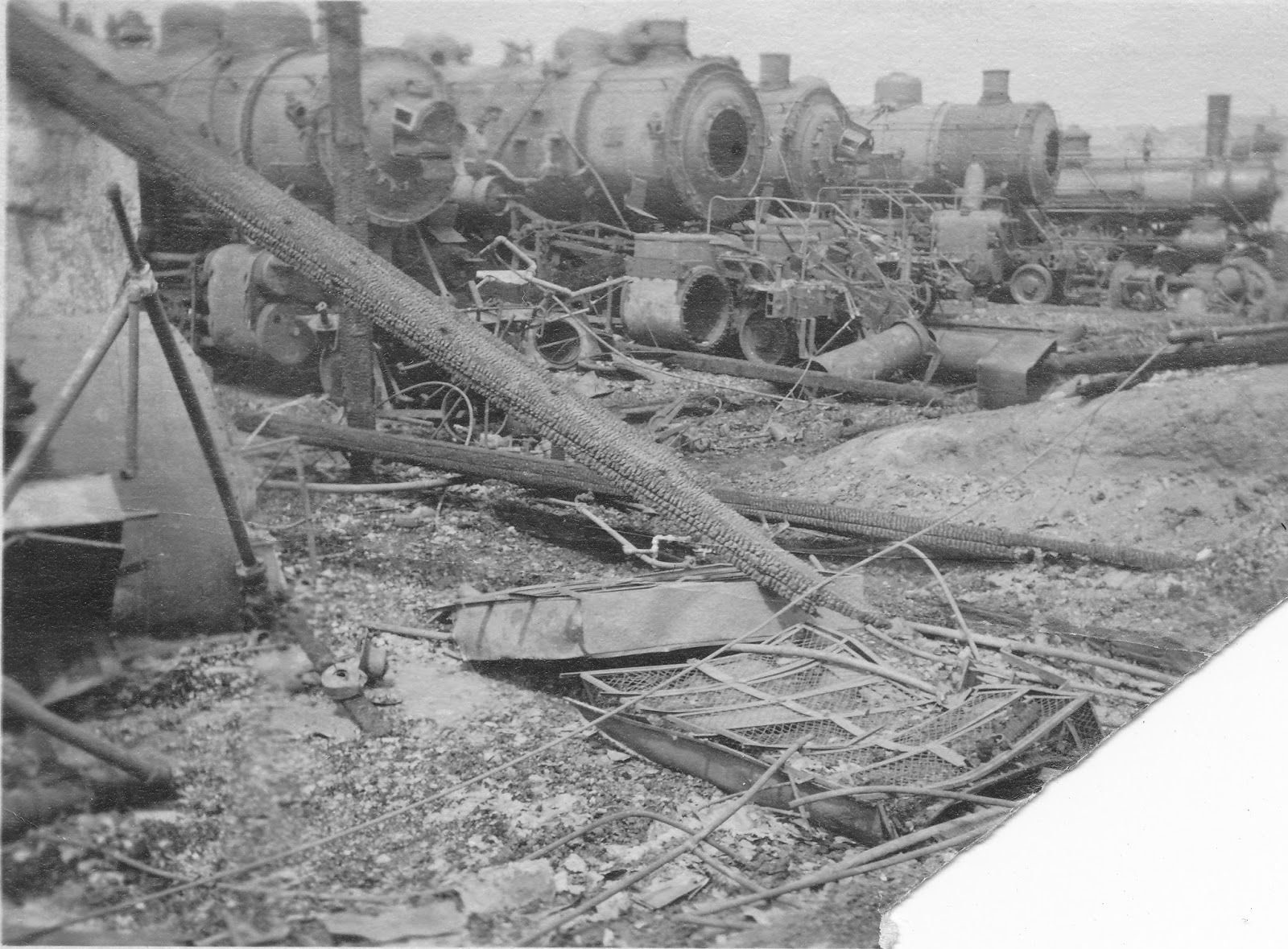 Shell Of The Othello Speeder Shed

Edited from an earlier version of this posting based on info from Ryan Reed.

Not long after the Burlington Northern took over the Milwaukee Road line through Othello, the long speeder shed east of the depot was torn down. 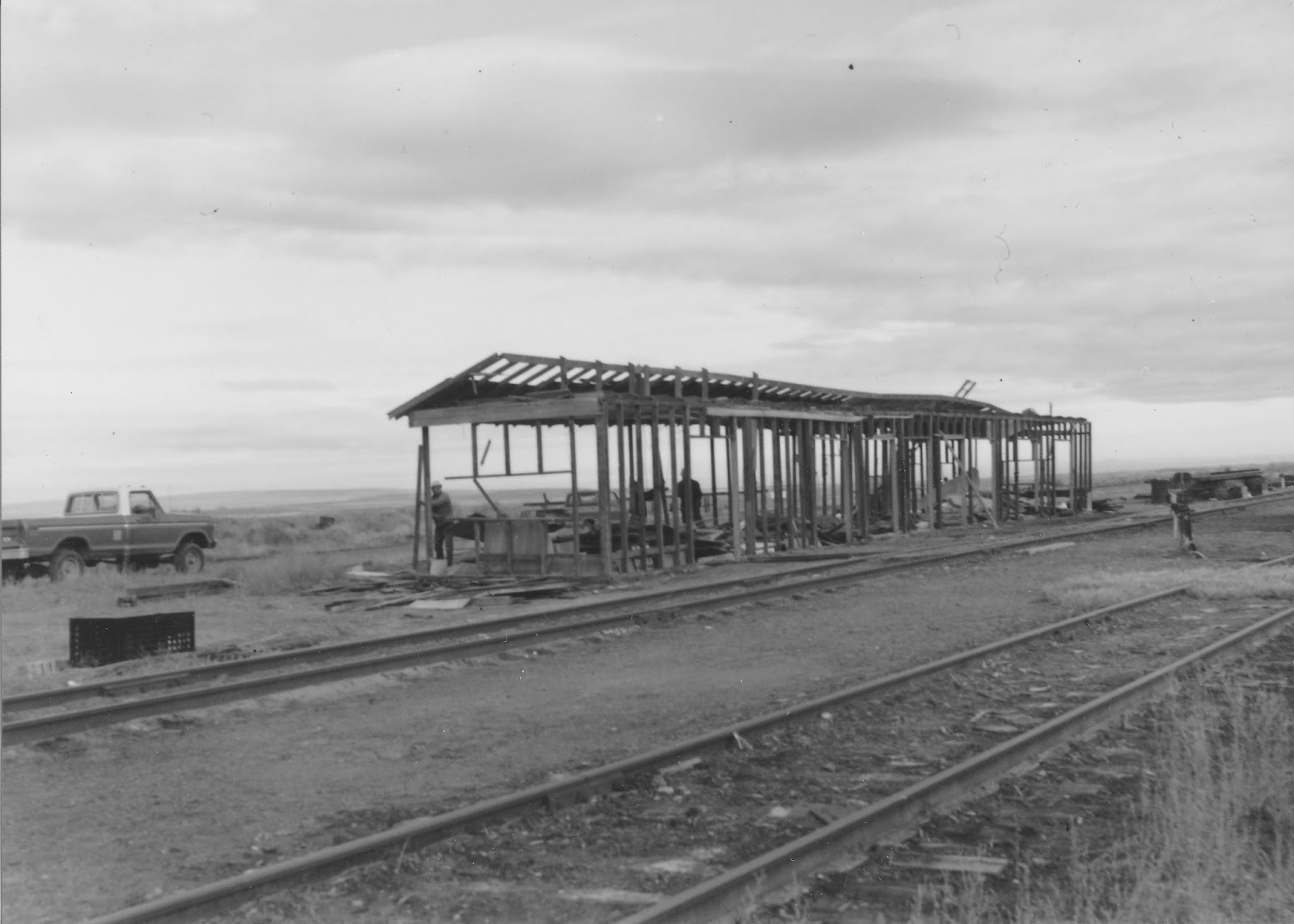 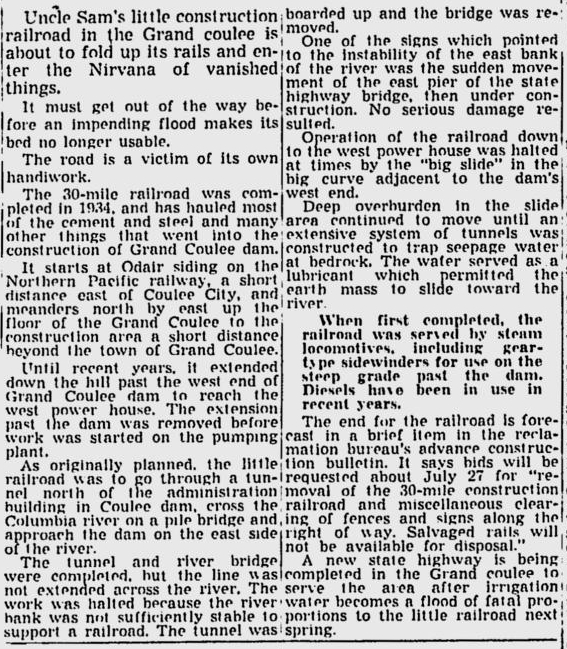 From the "Spokane Chronicle"

From what the article said, the last train to run was on October 12. 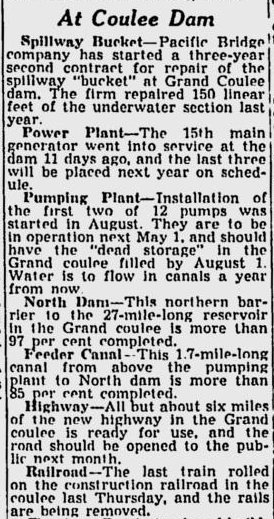 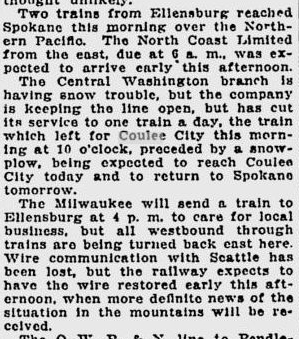 From the "Spokane Chronicle" 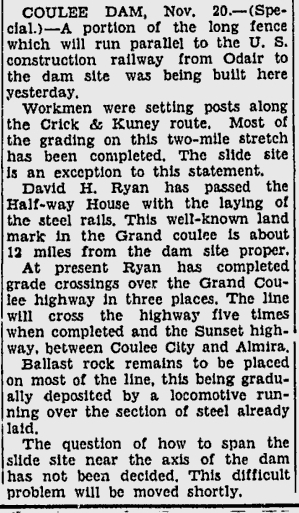 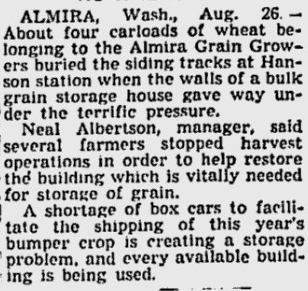 The Idaho Division, the non-electrified segment between Othello and Avery, ID was the first to be assigned diesel locomotives for freight service in the 1940s. Its capacity was increased as diesels were able to make better time over the division, since they did not have to stop for water and coal periodically. 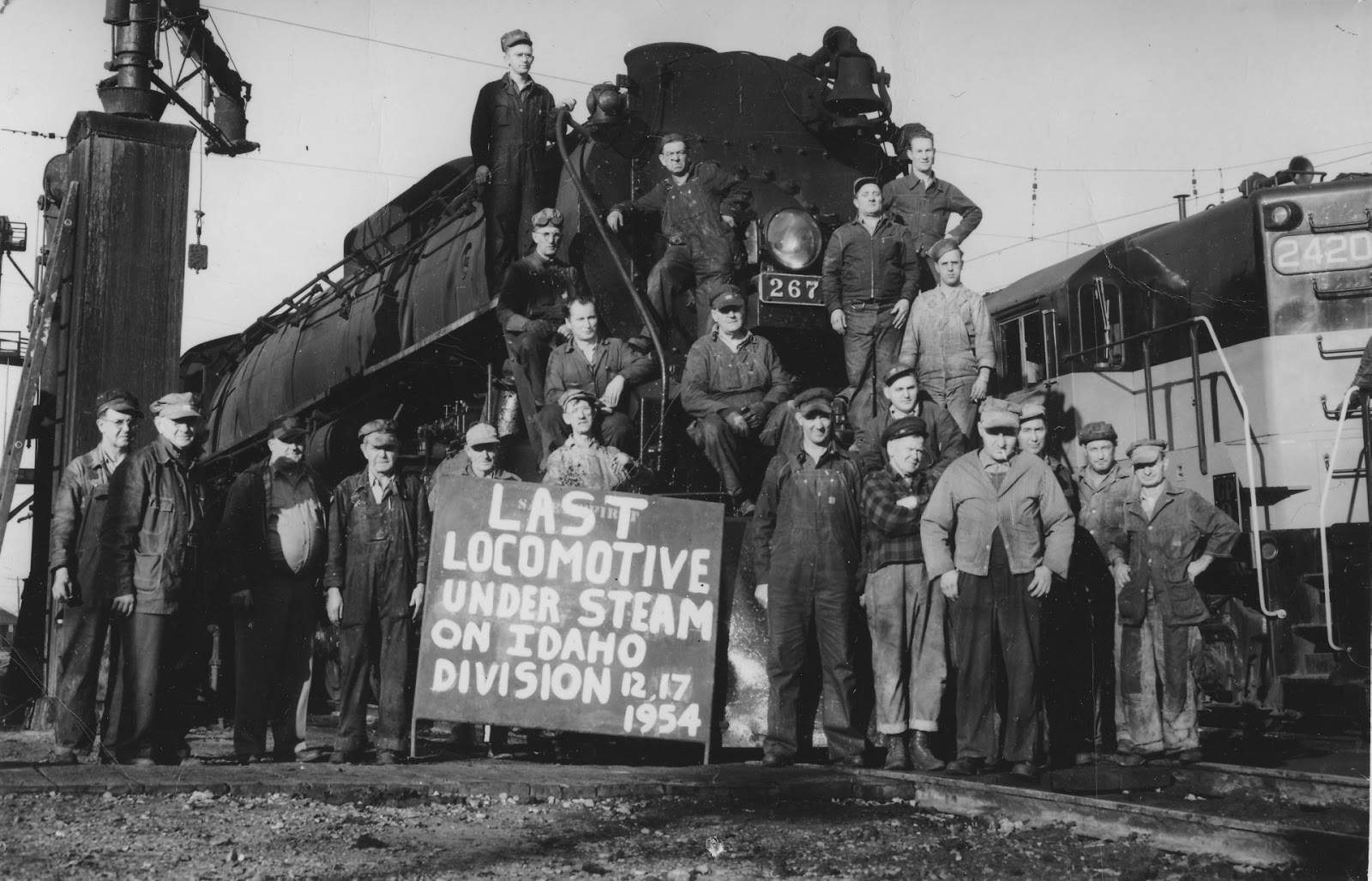 The 924 was a class K-1 Prairie-type 2-6-2, built by Alco in August, 1908, as the Chicago, Milwaukee & Puget Sound  No. 2040. This class of steam engine was engine normally assigned to the run to Hanford. It was routinely serviced at Othello. Most cars for Hanford were billed through the station at Beverly and at one time during the construction of Hanford, the money the Milwaukee received from there was the highest for any station on Lines West. 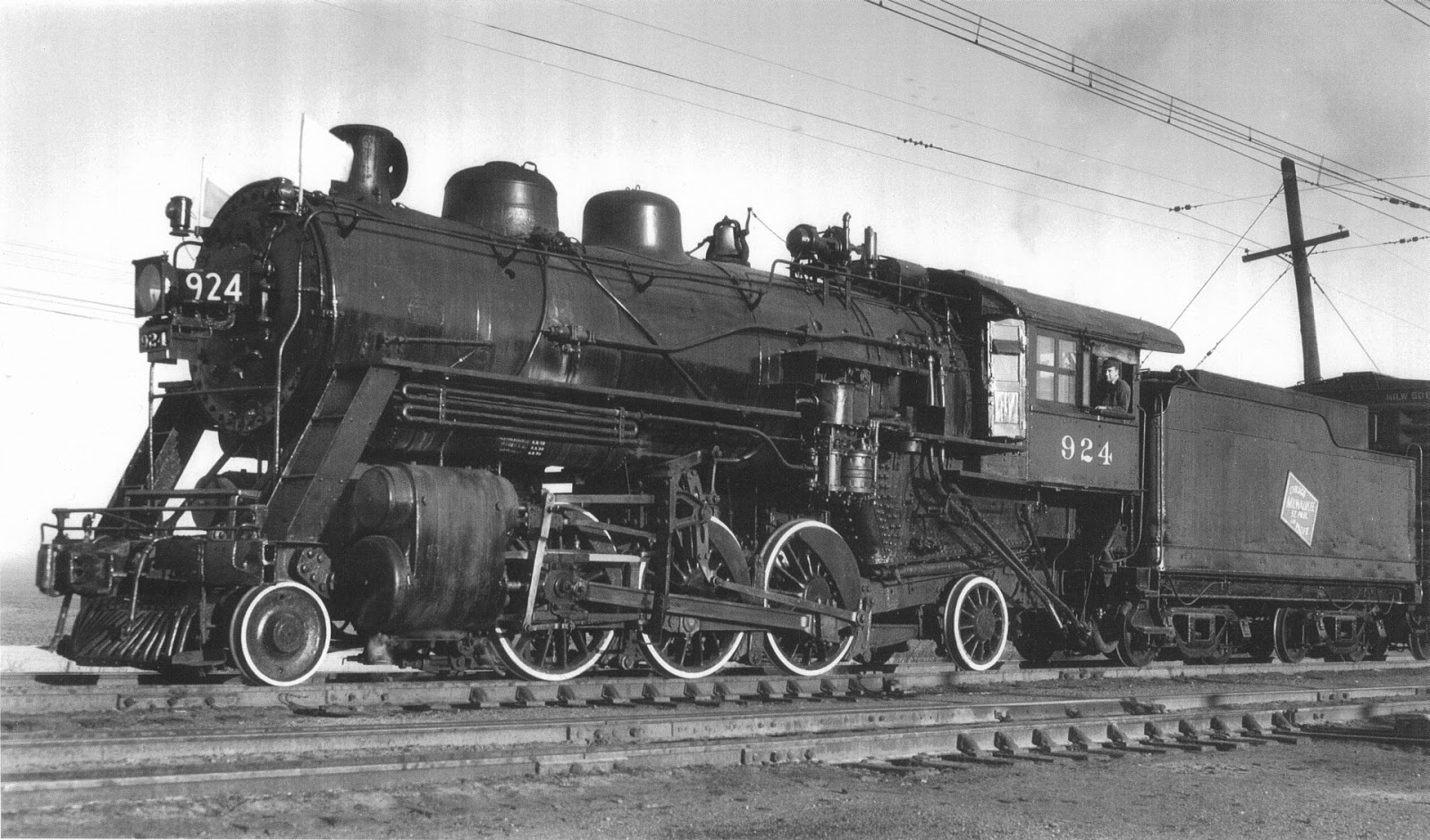 Three GP9s are getting inspected at Othello in 1973. At this time, the catenary for electric locomotives was largely in place, though only diesels were being used. For a time, the overhead wire was still live to deter wire theft. 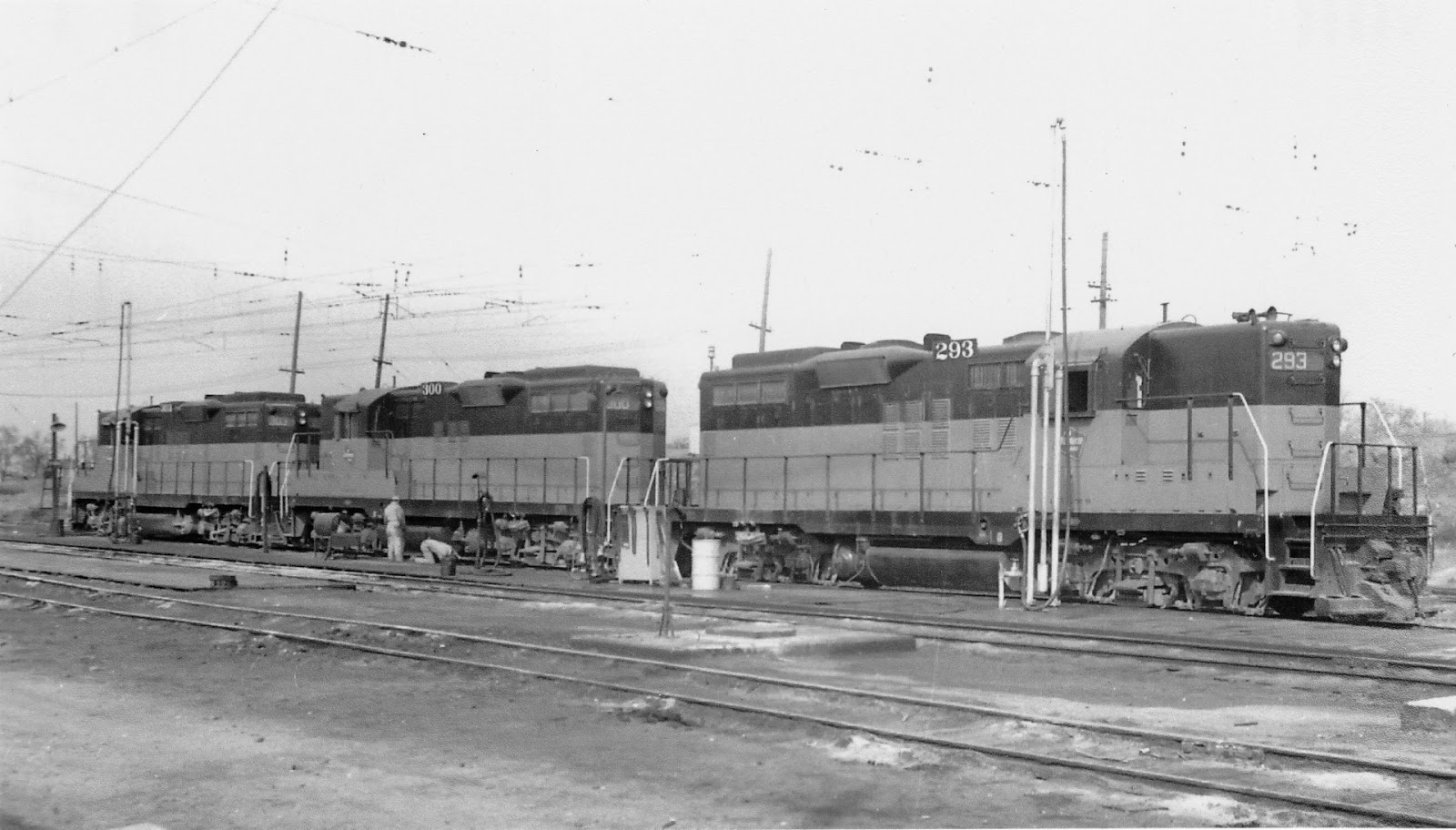 A work train, pulled by the Milwaukee’s distinctive boxcab locomotives, passes Corfu in 1951, on its way to a repair job. The caboose, with the distinctive horizontal ribbing, was one of many built by the Milwaukee in its own shops.  As for Corfu, only the mainline exists here now, not having had any trains pass by for a few decades. 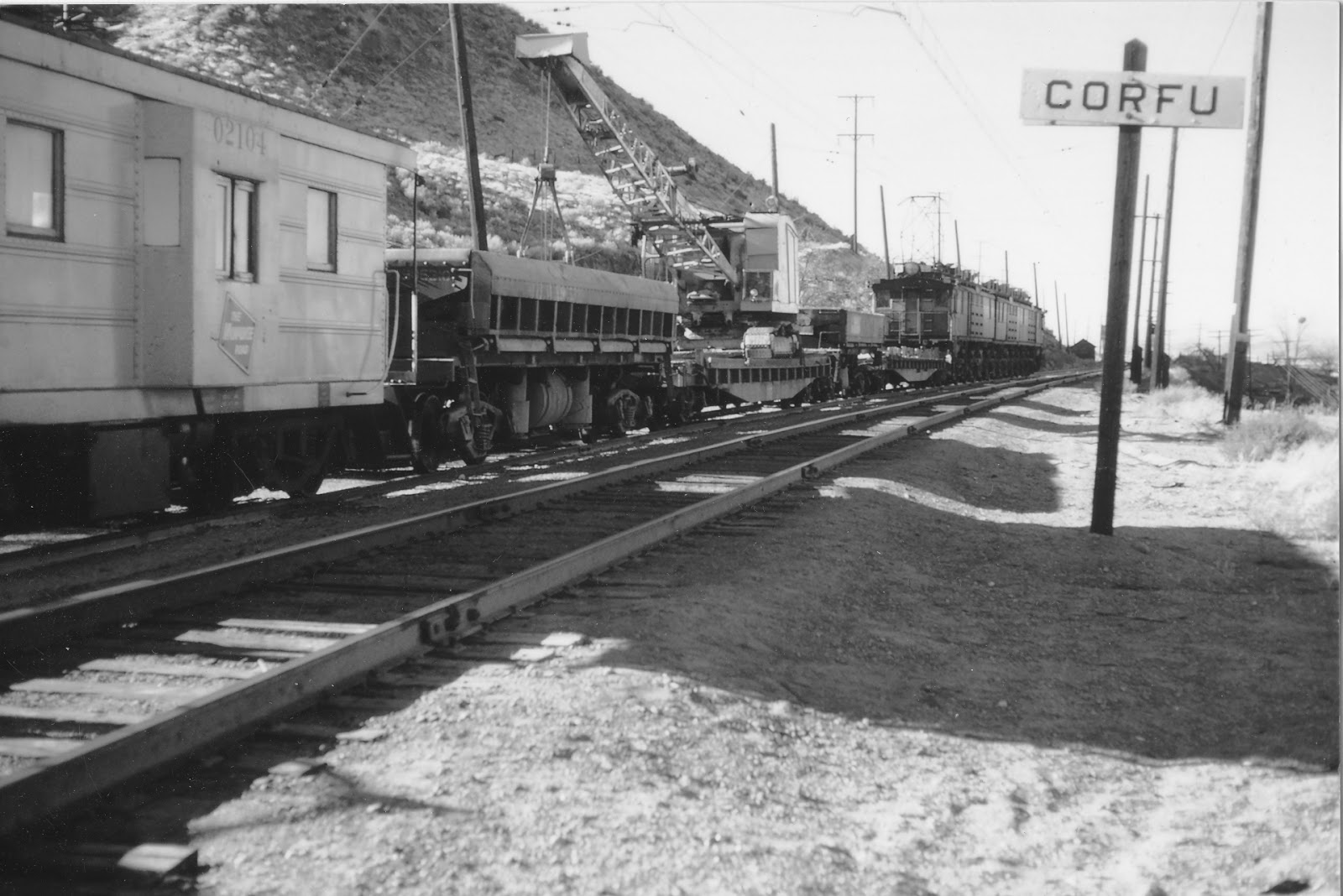 Corfu was named by a Vice-President of the Milwaukee, who also bestowed many other names on points in eastern Washington. It was named for one of the large islands off the mainland of Greece. The building on the right, in this July 1965 view, is a converted boxcar, likely used as the agent’s quarters after the depot and living quarters burned down in 1919. 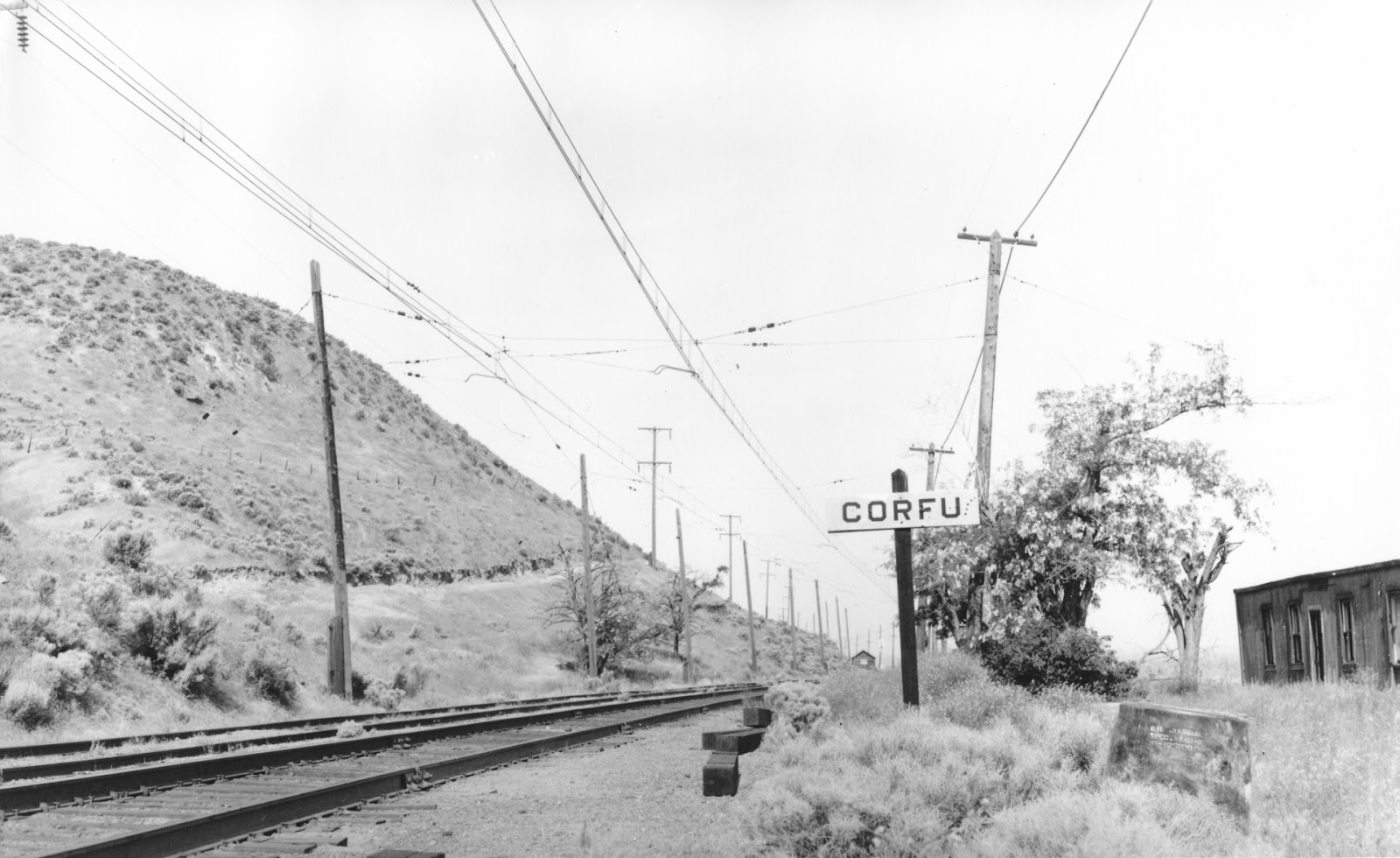 Clarence Rasmussen was a section foreman at Beverly, who at one time lived in the former depot up the line at Boylston. Because the train order signal is missing the semaphore blades, this photo was taken in the brief period between the time when the depot was closed as an agency (in 1968-69) and when it was re-opened as a third trick train order office at the end of August, 1971. Rasmussen likely took the photo within days of the depot closing, thinking at the time that it was unlikely it would ever re-open again. 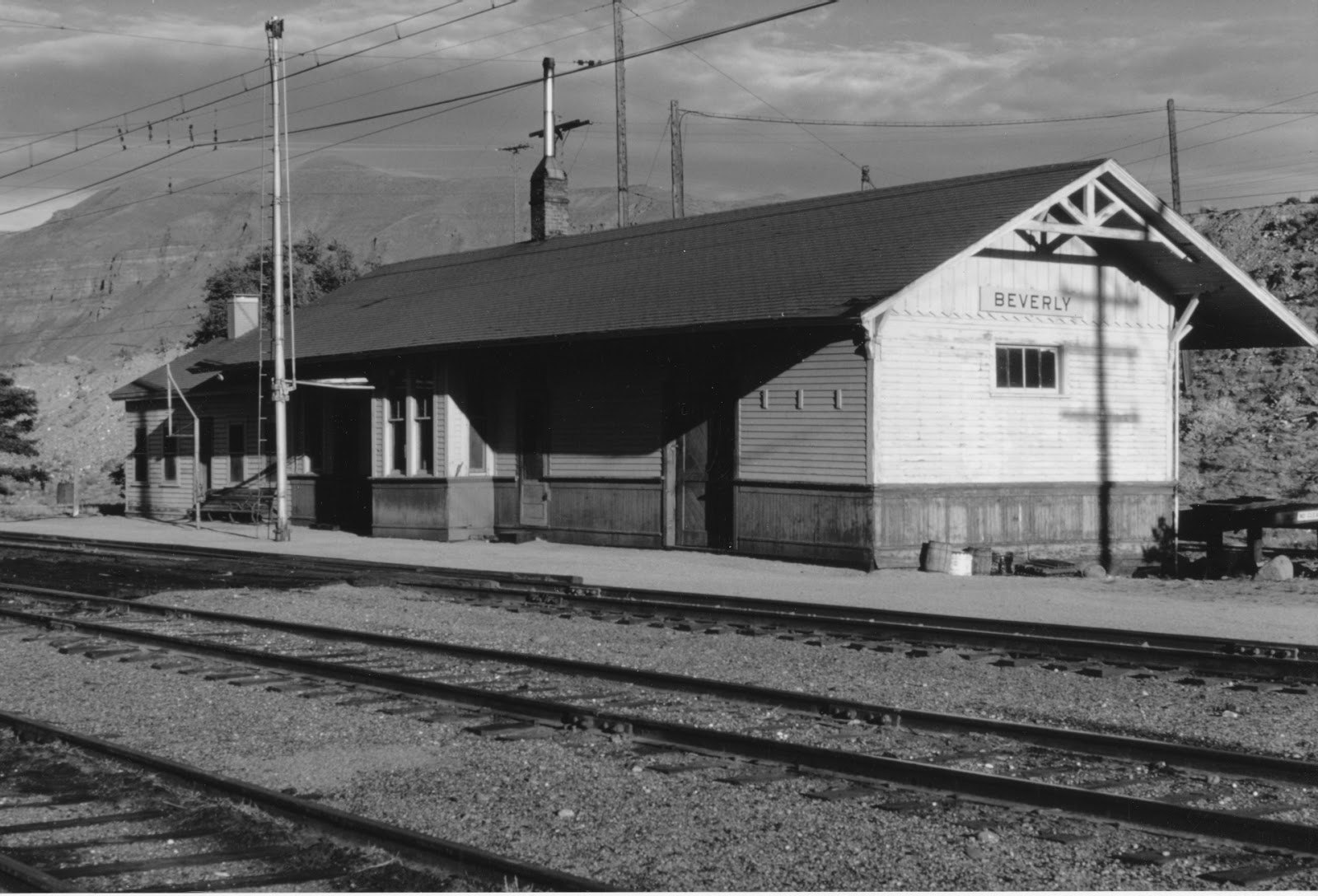 The E-39 set of boxcab electric locomotives has coupled onto a westbound freight at Othello in 1973. An electrical supervisor for the Milwaukee, Lawrence Wylie, conceived a  device which allowed a diesel locomotive to be operated in unison with an electric boxcab set, and was known as a "Wylie throttle." easily allowing the electrics to continue to be used on through trains. 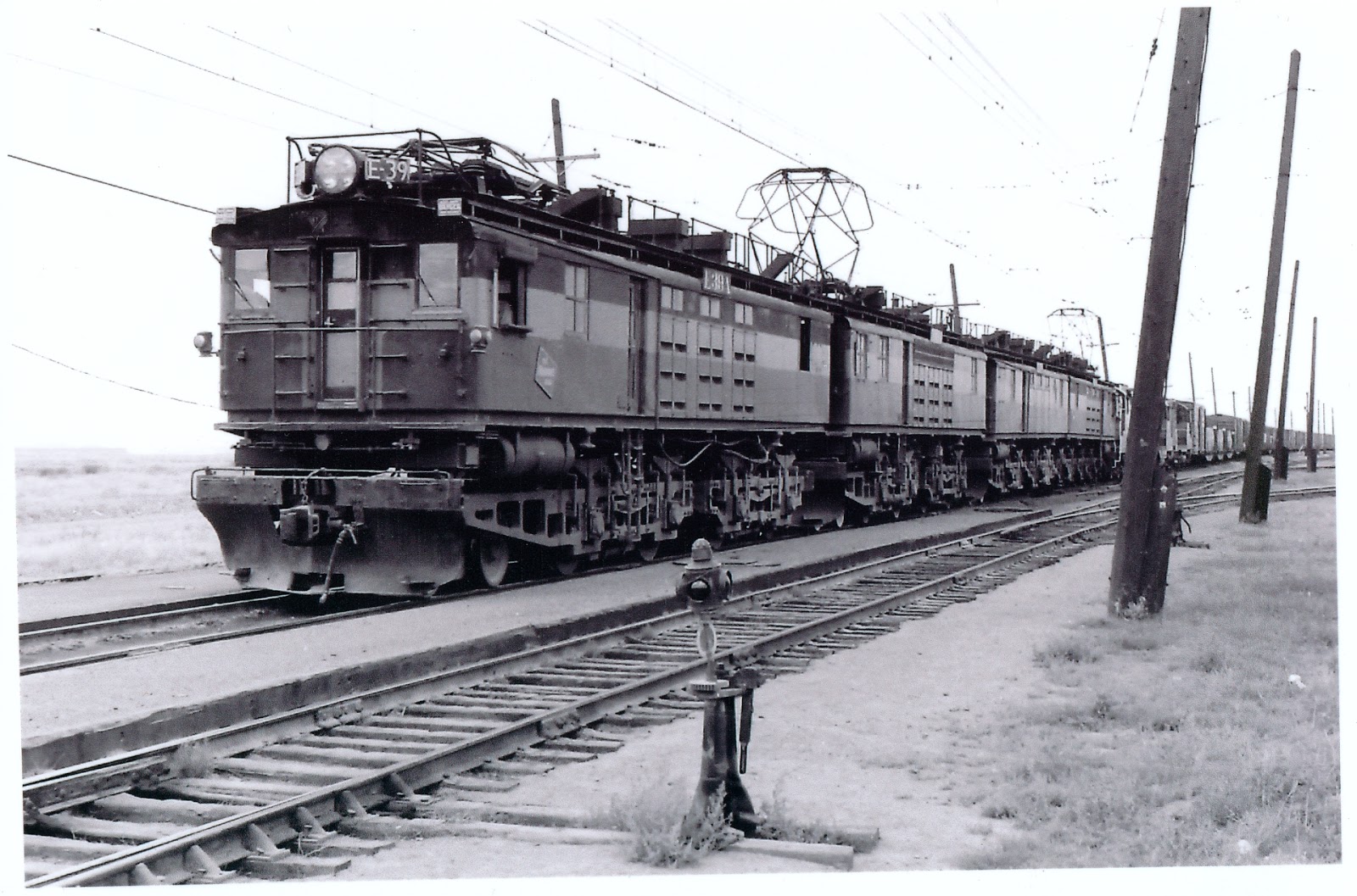 Stone ovens were quite common in the Big Bend area, where crews worked for longer periods of time in one place. Evidence of ovens on the Milwaukee, Great Northern, and Northern Pacific still exist. This view shows an oven on the west side of the Columbia River bridge at Beverly. A large fire was started inside the oven, allowing the rocks to be fully heated, then the fire and ash were swept out and bread dough or other foods to be heated were placed inside to bake. 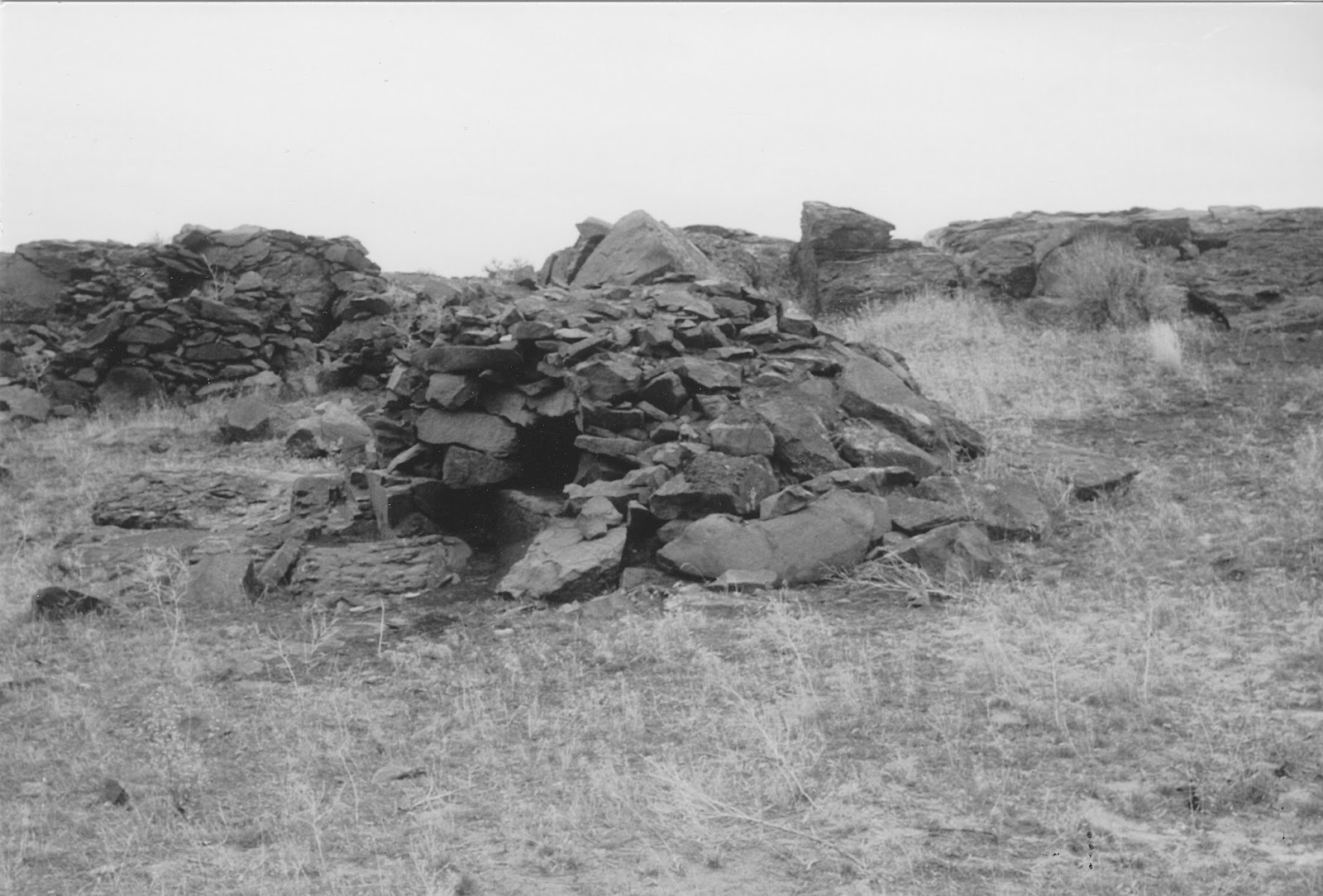 Not long after the Milwaukee Road abandoned its lines through the area in 1980, the track was reclaimed for reuse. Here is the old yard area at Beverly, looking like a shadow of its former busy self. The depot is the furthest building away. 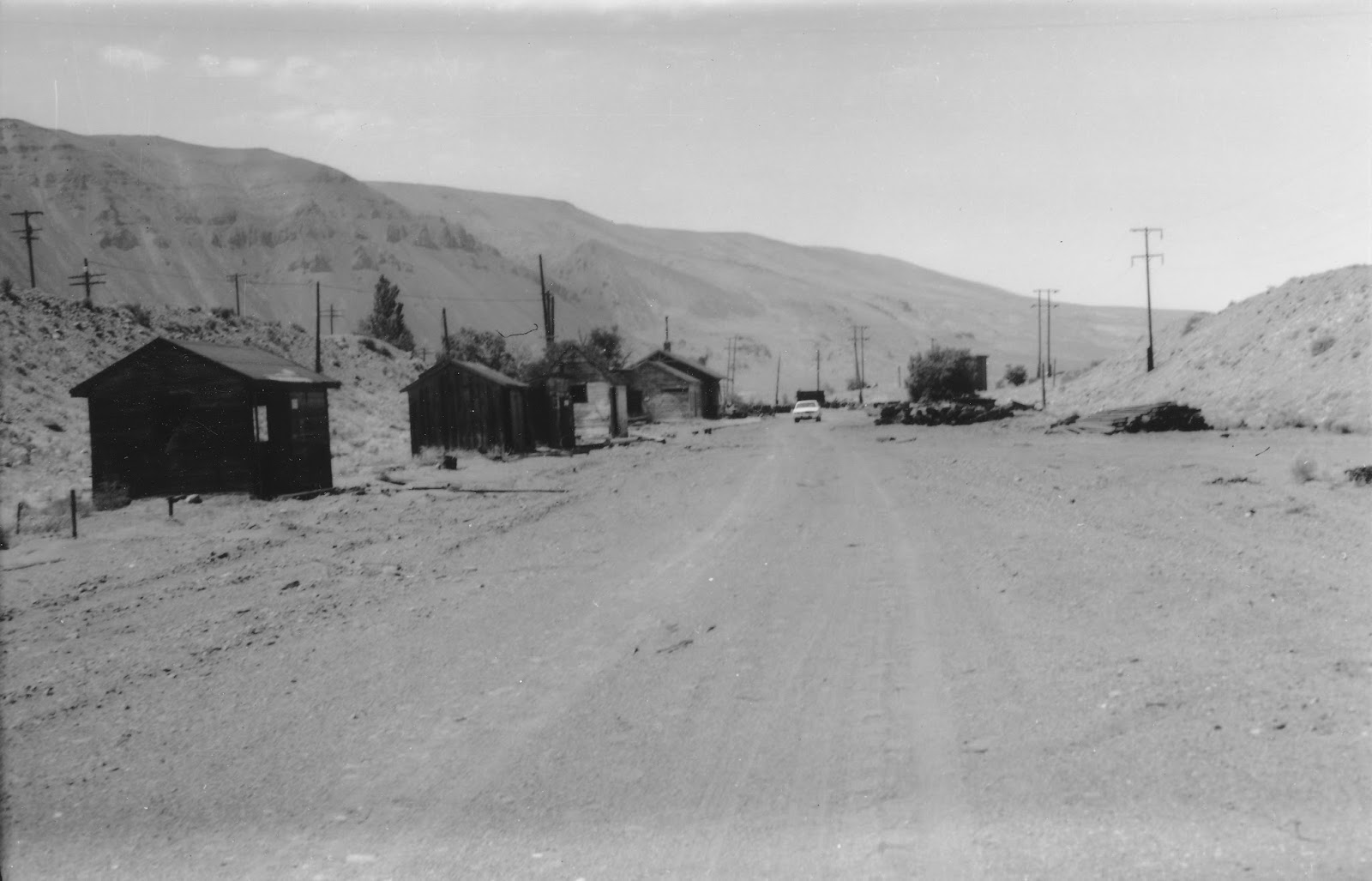 Courtesy of the late Mike Denuty.

The facilities at Beverly were in keeping with a mountain railroad, being that the 2.2% grade headed west was just on the other side of the Columbia River bridge. Steam engines were not rated for very much hauling ability on this grade, so when the electrification was installed in 1919, the amount a train could take up the hill was greatly increased, due to their better ability. The wye was installed here about 1908 because, until the bridge across the Columbia was completed, Beverly was the end of the line for any train movements from the east. It then continued use to turn the steam-powered helpers and, after 1913, the steam power used on the Hanford branch. After electric boxcabs were used as helpers, beginning in 1919, which were double-ended units, the wye remained solely for turning the steam, and later diesel, power working the Hanford branch. 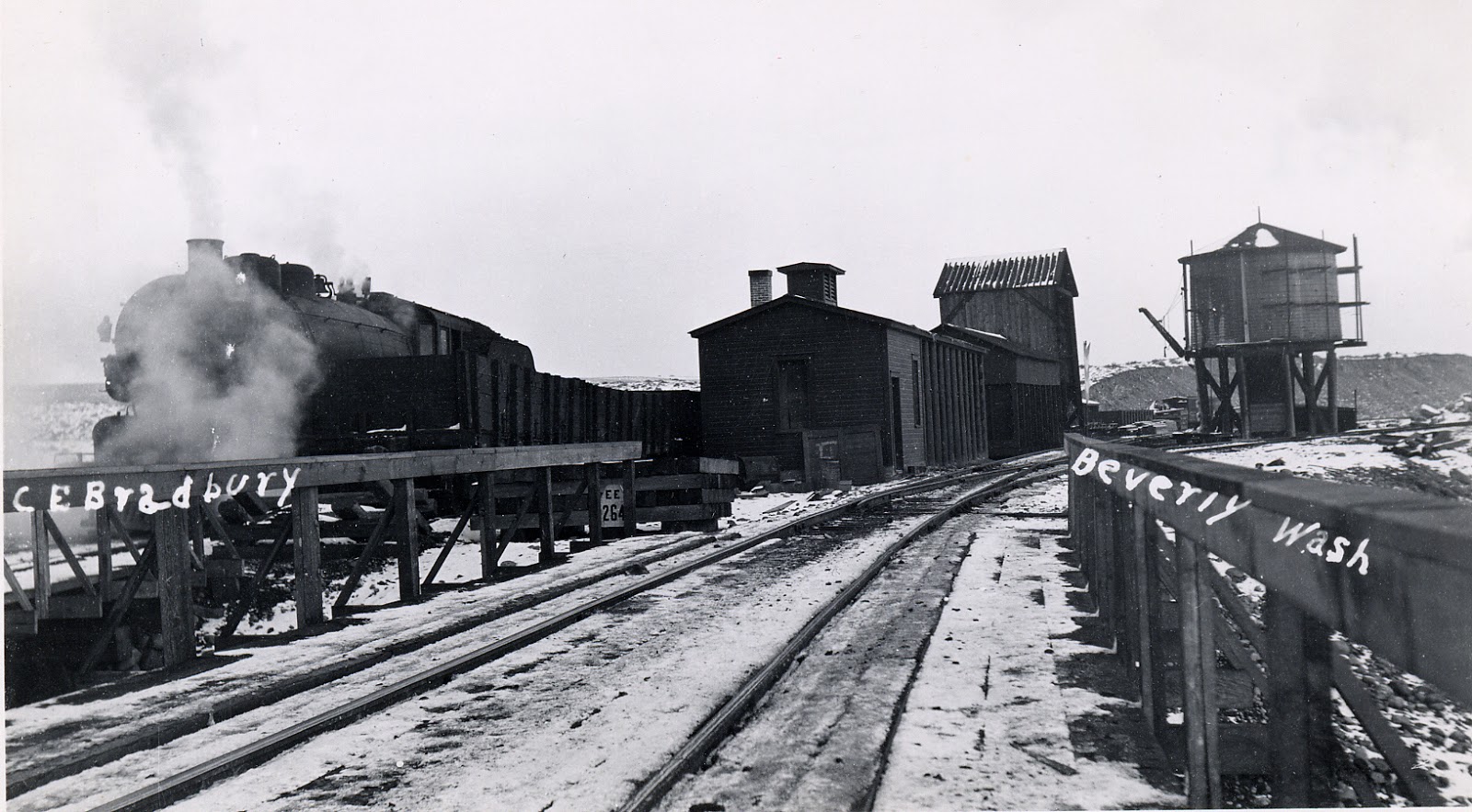 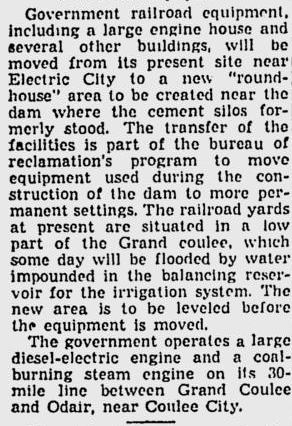 In The Railroad Ranks 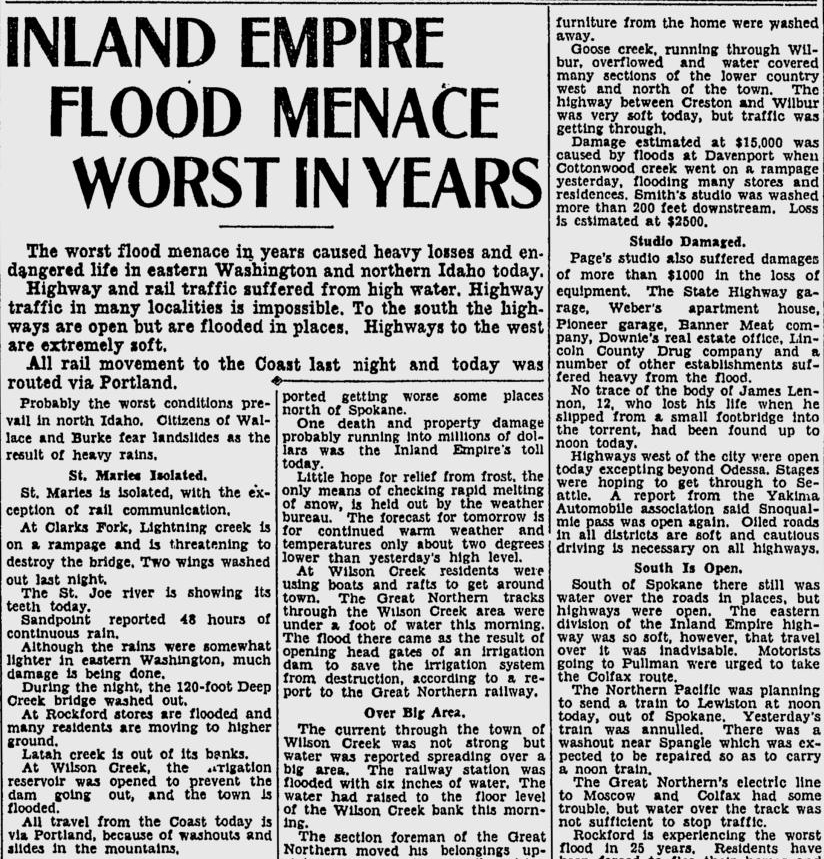 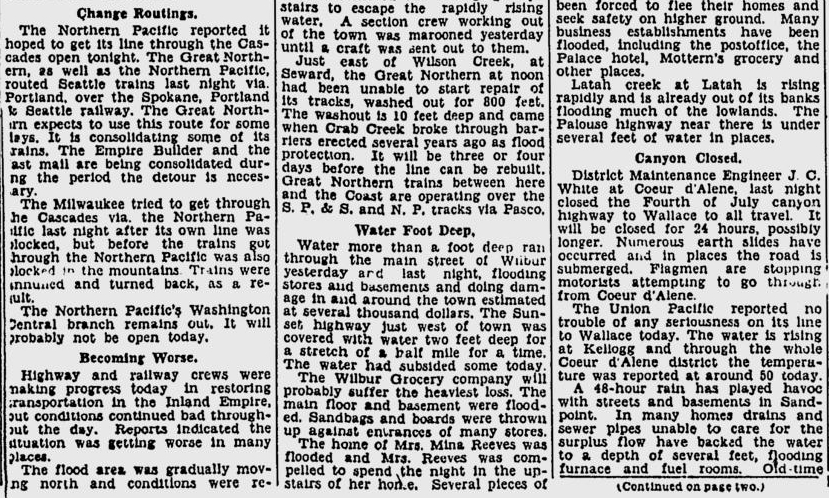 Ride Train For The First Time 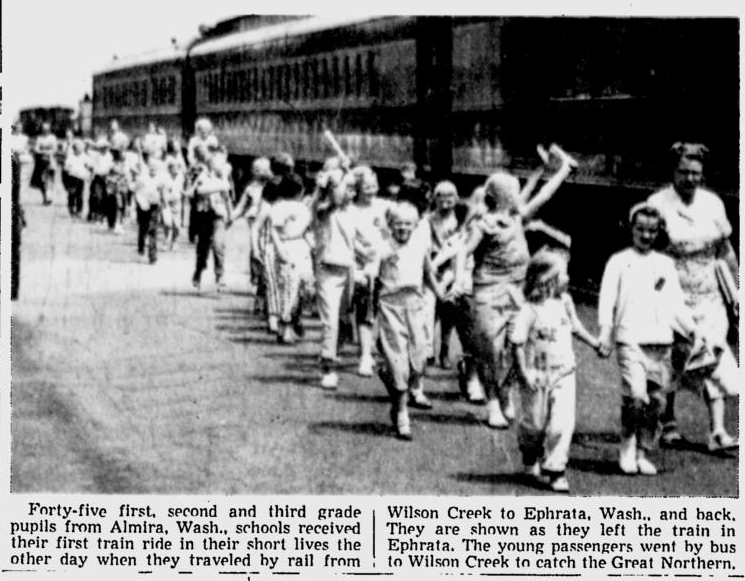 GN To Spend Half Million On Rail Work