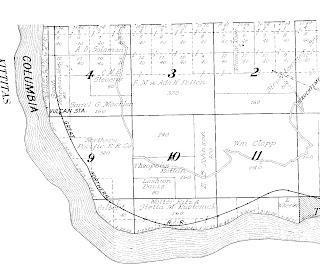 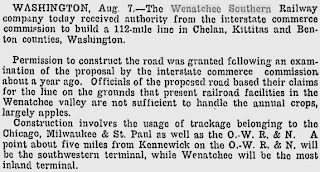 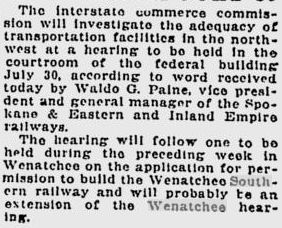 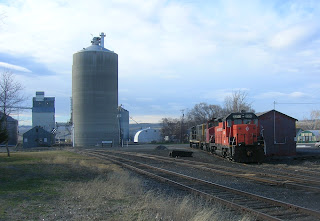 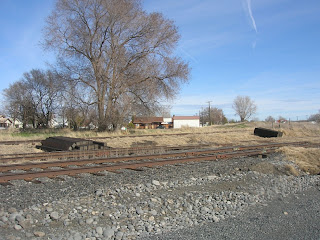 Shown as "Miles" on the map. 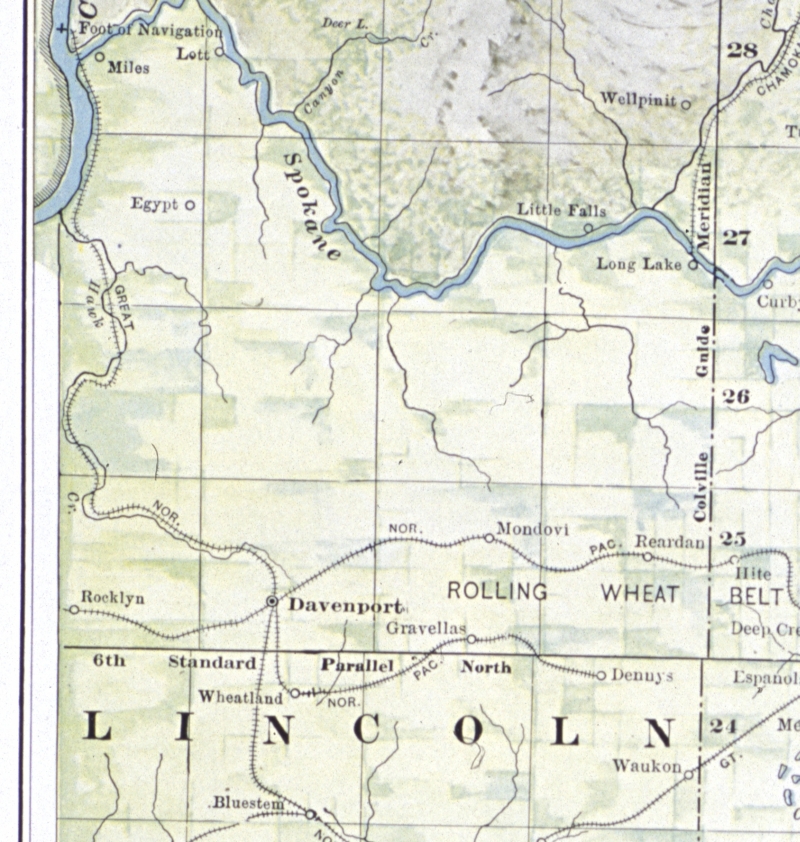 One person commented when asked about this branch: "This, I presume, would be GN's stillborn Hawk Creek Branch. It left the GN mainline at Bluestem and was intended to run to Klaxta and/or Peach on the Columbia River. Parts of the line were graded in 1913 and can be seen in several places west of SR 28 between Bluestem Creek Bridge and Davenport. I haven't explored north of Davenport. As far as I know, track was never laid on the grade. I'd be pleased to learn why GN aborted the completion of the line."
Posted by SDP45 at 3:01 PM No comments: 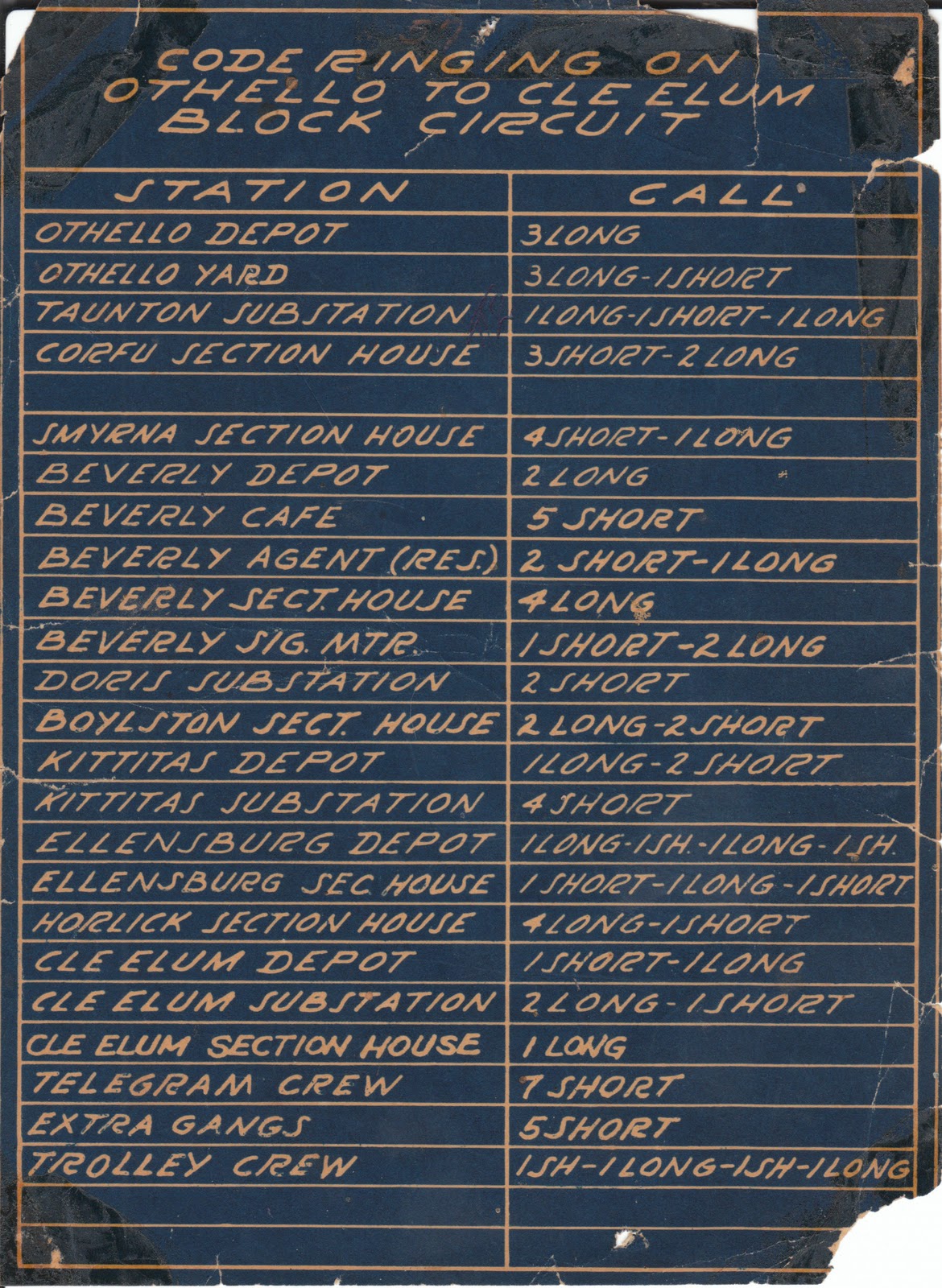 Allen adds: "Wayside phones were able to connect to either the block phone circuit, to ring up the depot, section foreman, substations, etc. using the ring code chart that was normally posted inside every box, or written in pencil on the inside wall or door panel.
Or, with the throw of a knife switch, you could contact the train dispatcher direct on the "DS" phone circuit. Some would turn the crank handle, making one l-o-n-g ring, that would just make a rumbling sound on the dispatcher's phone, but may have actually rang a bell in the dispatcher's office, I'm not sure about that. Anyway, it was not necessary as it was an open circuit and one only needed to press the talk button on the lineside phone and ask "Dispatcher?" for him to answer.
On the Coast Division, although they were gradually weeded out over the years, there were still many of these phones in operation right up until the end in 1980 on the main line. Most branch lines were phased out by the mid-1970's, replaced in section houses by commercial telephones where service was available."
Posted by SDP45 at 2:52 PM No comments: 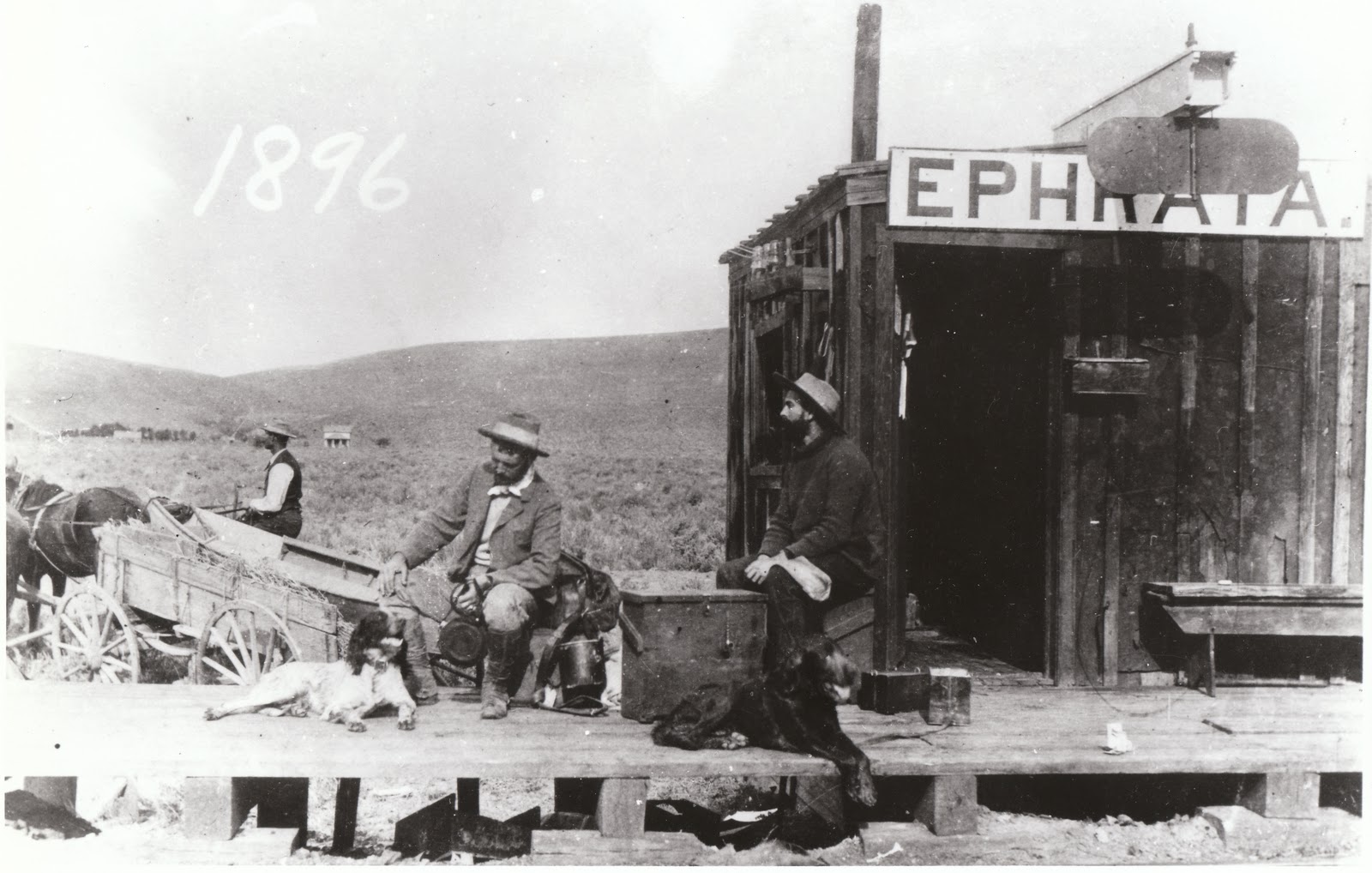 Allen adds: "The first is what must have been the first telegraph office at Ephrata. The picture is dated 1896 but, in reading your blog, it must be more like 1901. Showing the half-box car station with tar paper applied externally to keep out the drafts. Note the old style sign with the period after the name. Also the old "swift style" train order signal and the telegraph wires going in one side of the station and, after going through the instruments, would exit out the other side of the office and back onto the telegraph poles. Note that there are two dogs lounging on the depot platform along with the men, a boat in the wagon and a trail through the sagebrush to the town in the distance. A far cry from the spacious 200 foot long depot that was eventually placed there."

Another view of the same vintage recently appeared: 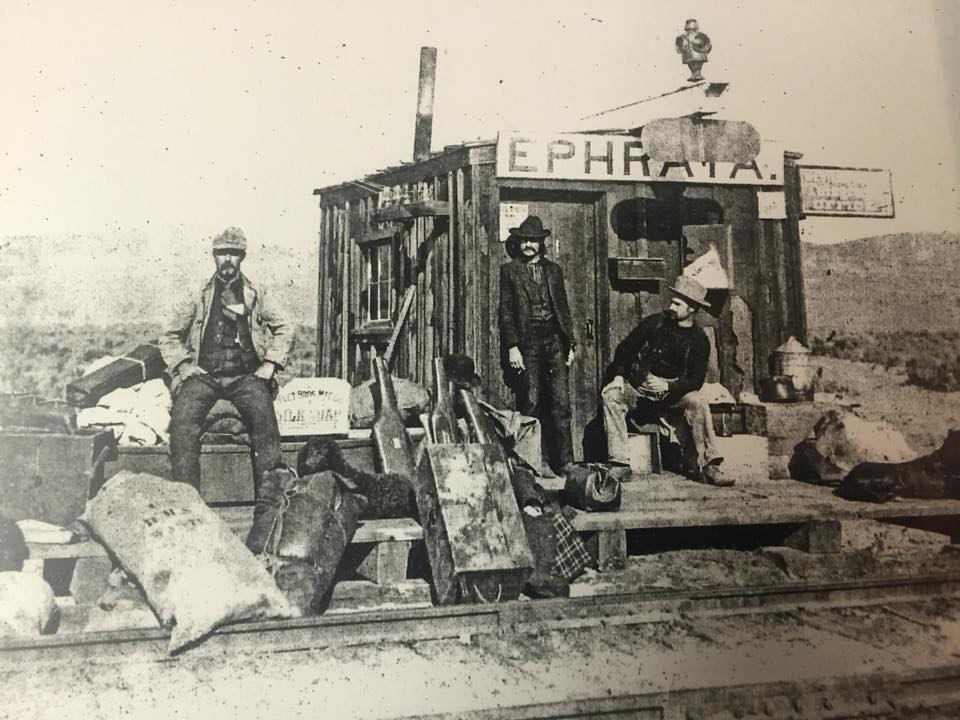 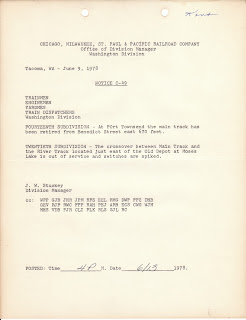 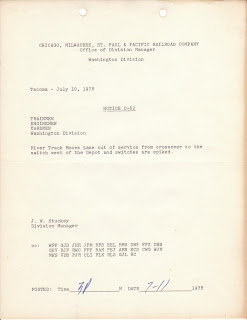 Courtesy of Allen Miller
Posted by SDP45 at 2:36 PM No comments: 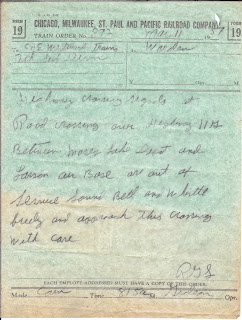 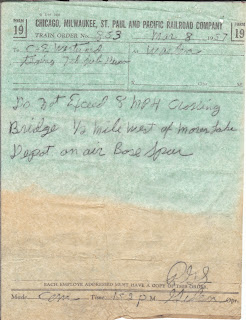 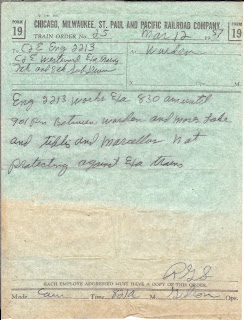 Courtesy of Allen Miller
Posted by SDP45 at 2:33 PM No comments: 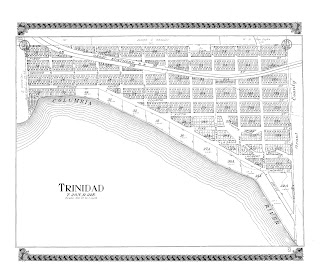 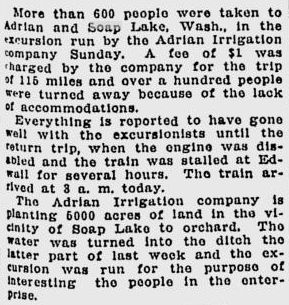 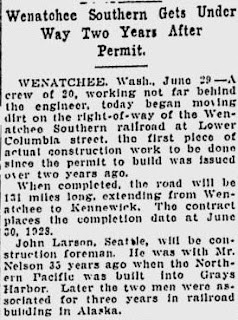 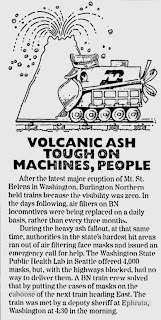 From the "New York Times." 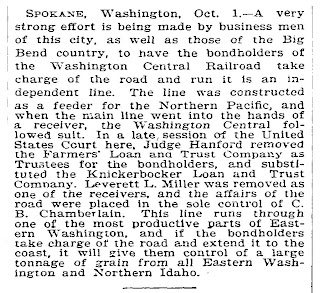 Sale of the Columbia Basin Railway?

From the "Columbia Basin Herald."

MOSES LAKE - The two brothers owning the Columbia Basin Railroad are involved in an internal management dispute and dividing up their railroad and real estate companies.

Eric Temple, vice president of Columbia Basin Railroad Co., made an offer to his older brother and company president, Brig Temple, to buy his portion of three of the business's railroads, according to a report Eric Temple gave to the Clark County Railroad Advisory Board.

The other railroads are the Central Washington Railroad and the Portland Vancouver Junction Railroad.

Eric Temple, of Bellevue, said this week they are going through an evaluation process to determine the fair market value of their seven railroad and real estate companies.

Eric has the first right of refusal and a Washington, D.C., attorney is handling the sale, according to the board documents.

If Eric buys his brother's portion of their businesses, he doesn't expect many staff changes.

"I anticipate growth," Eric said. "The job of a CEO is to add shareholder value."

He described their issues as "internal disputes" going on for five years or longer.

He claims the situation cost him millions of dollars, resulting in the decline of their rail car shipping and employee layoffs.

He also said he loved his brother and was sorry it had come to this.

Eric said he's been trying to push the process on for more than a year.

He said he gave the report about the company's status to the advisory board because the private sale is still a public process and wanted to alert the board and Clark County before they received phone calls about the sale.

"Any potential purchaser will want to talk to Grant County and the Port of Moses Lake," he said. "It will necessarily become somewhat public."

Brig Temple, of Yakima, said he had no comment.

"I really can't discuss what goes on between my brother and I in an open forum," Brig said.
Posted by SDP45 at 2:51 PM No comments: 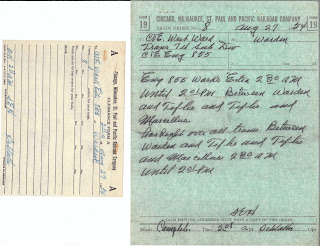