The "New" Depot at Coulee City 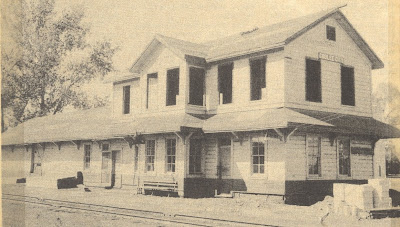 FACE LIFTING BEGINS—Work has already begun on removing the second story from the Northern Pacific depot at Coulee City. In two months it will be a stronger, modern building, ready to face a new era and play and important role in the building of the third powerhouse at Grand Coulee Dam.

Coulee City’s second oldest structure is getting a face-lifting—which some observers interpret as an indication of a new era of activity and prosperity to this old community—once considered the typical cowboy town of ‘the old west.”

The Northern Pacific Railroad depot, built in 1884 (I believe this to be in error), is being completely rebuilt. The second story of the structure is being removed and the bottom floor is being strengthened and modernized. A seven-man crew headed by C. W. Phar has started the rebuilding job, which is not expected to be completed until about July 1.

The demolition crew at work removing the second story of the old structure has removed hundreds of “square” nails, ranging from small shingle nails to some five inches long. The square nails date the building as one built prior to the turn of the century, when Coulee City was one of the outposts of the west.

With only three freight trains a week running into Coulee City, what’s all the excitement about?

It doesn’t take much figuring to assume that Northern Pacific is getting ready to handle the big bulk of material and equipment that will be necessary to construct the $400 million third powerhouse at Grand Coulee Dam. The legislation has now progressed so far in congress that it is considered a certainty to pass. With $3 million in preliminary engineering and construction funds included in the bill, the project should get underway soon after July 1.

Northern Pacific is the only railroad that can serve the Grand Coulee area and its closest and best unloading point is Coulee City. The federal government still owns a shipping yard with unloading facilities two miles east of Coulee City. With heavy crane facilities, it is considered a certainty that this will be the principal unloading point for material and equipment that will be needed to build and equip the new powerhouse planned at the big dam. Giant generators and turbines will be coming. And it is estimated that nearly 5,000 carloads of cement will be required in the new powerhouse structure and dam alterations.

During construction of the Grand Coulee Dam in the thirties, Northern Pacific ran a spur line to the dam. The track ran from Grand Coulee up the bottom of the Grand Coulee to the damsite. The old track bed now lies at the bottom of Banks Lake, the storage lake for water used in irrigating the Columbia Basin Project. The country between Coulee City and the damsite is so rugged that it is not considered feasible to construct another spur line. So most of the material and equipment will be trucked from Coulee City to Coulee Dam. This should create a new era of prosperity for Coulee City and the Northern Pacific.
Posted by SDP45 at 7:44 PM