While I hope you enjoyed the book, "Big Bend Railroads," there were many photos that did not make the cut for numerous reasons. This post will give you the chance to see those missing photos.

You can still find the book at Amazon.com. 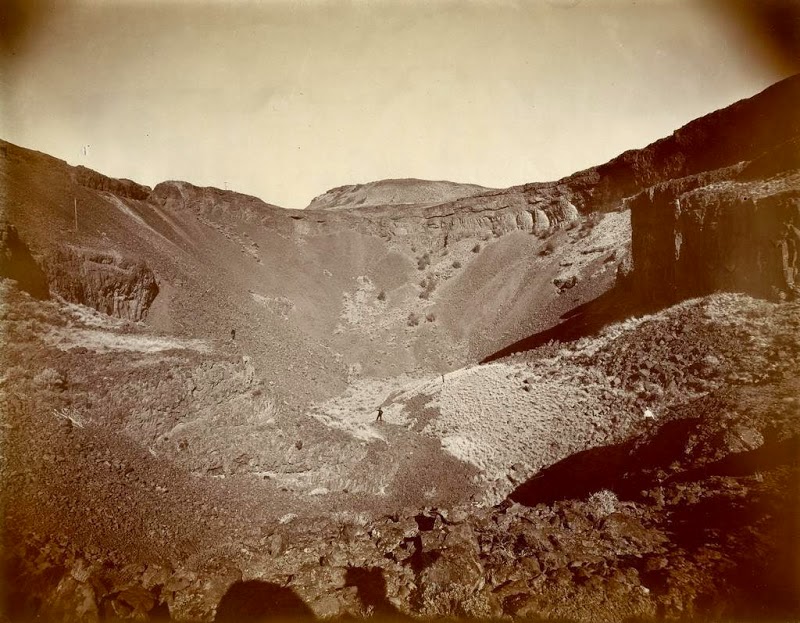 This plunge pool between Quincy and Trinidad looked like a crater to early settlers and the railroad, who named the adjacent station Crater. You can see the cut the railroad blasted out of the basalt on the top left. This spot has been dammed and now holds a small amount of irrigation runoff water. (Courtesy of the Great Northern Railway Historical Society.) 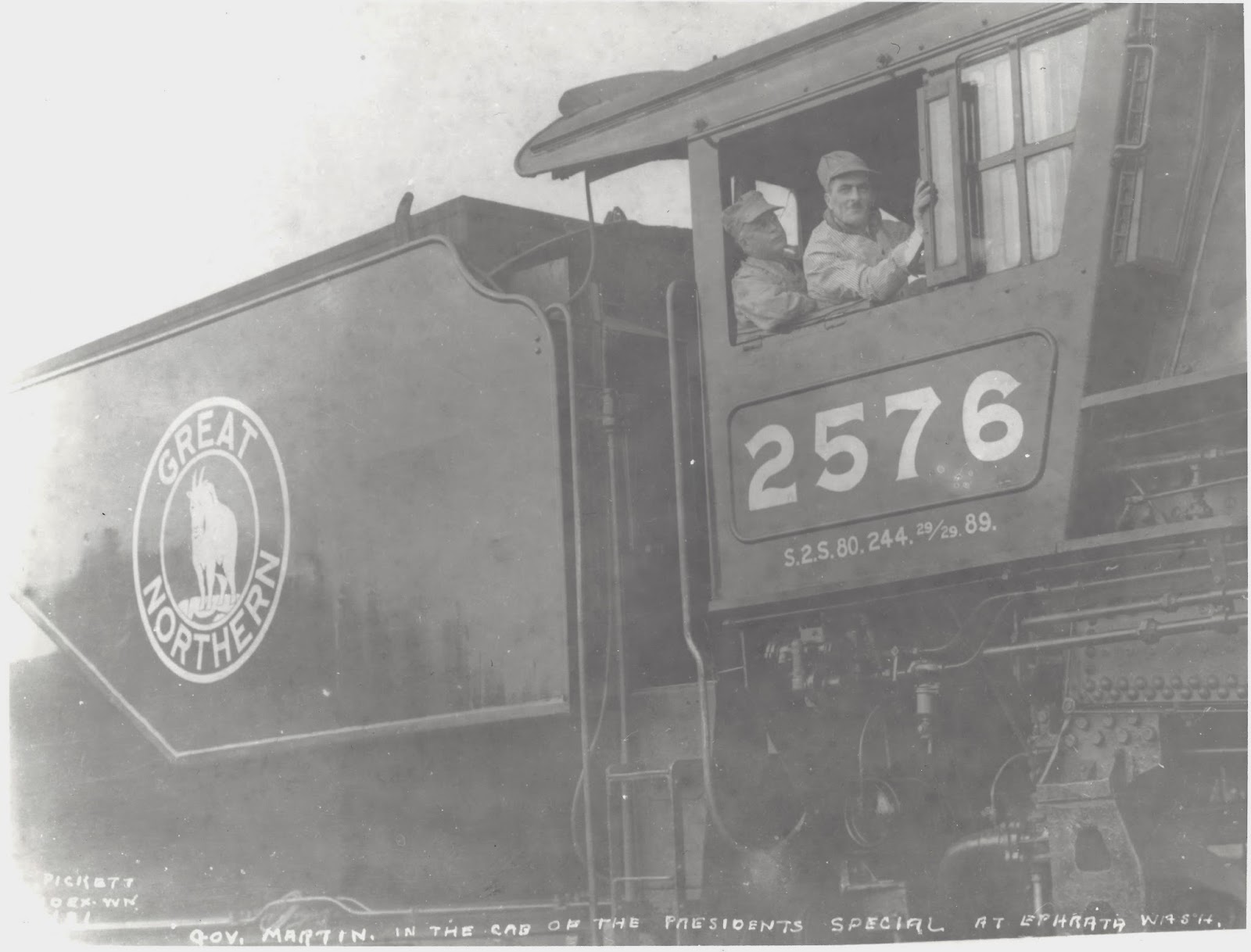 On December 2, 1934, President Roosevelt was scheduled to visit ground-breaking ceremonies at the site of Grand Coulee Dam. The Presidential Special that was to run to Ephrata had a special helper engineer that day, in the form of newly elected Washington State Governor Clarence Martin.  Behind the Governor is the actual engineer, Danny Loughlin. (Photograph by Lee Pickett;  courtesy of Allen Miller.) 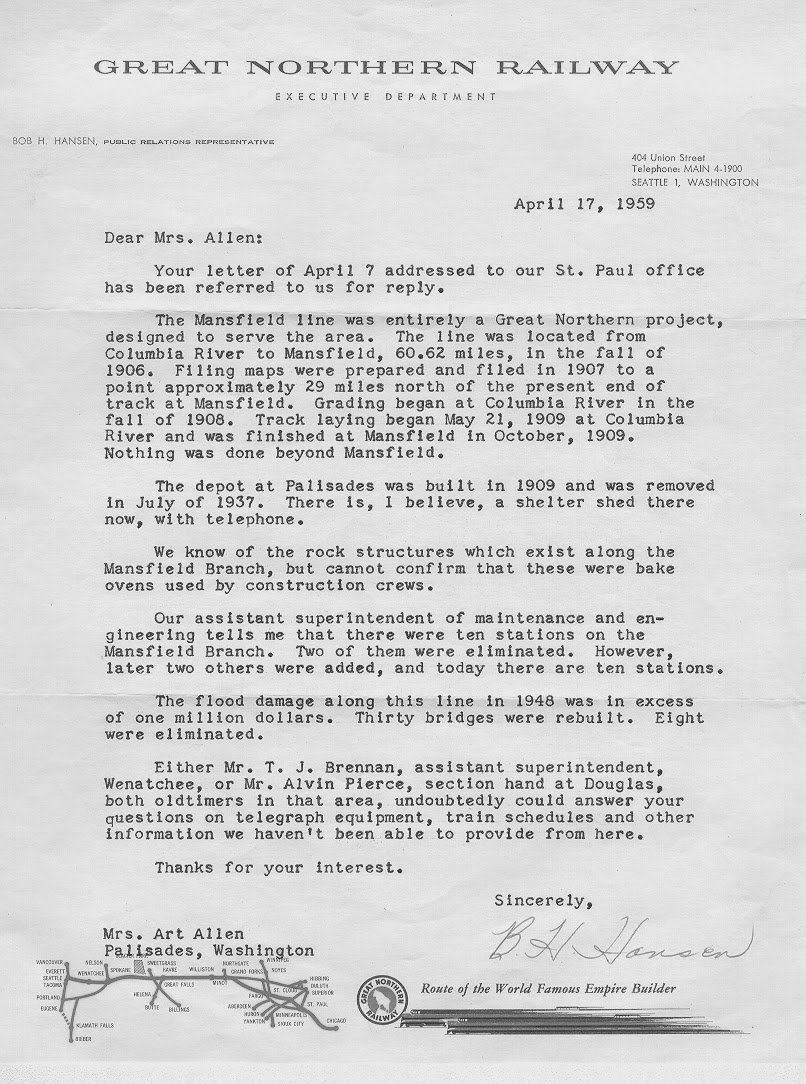 The Great Northern maintained a public relations department, charged with handling the image of the railroad, which included letters like this. Digging up the facts outlined in the letter probably took a few days, as sources of information were examined and people were questioned before the letter was drafted. (Courtesy of Darrin Nelson.) 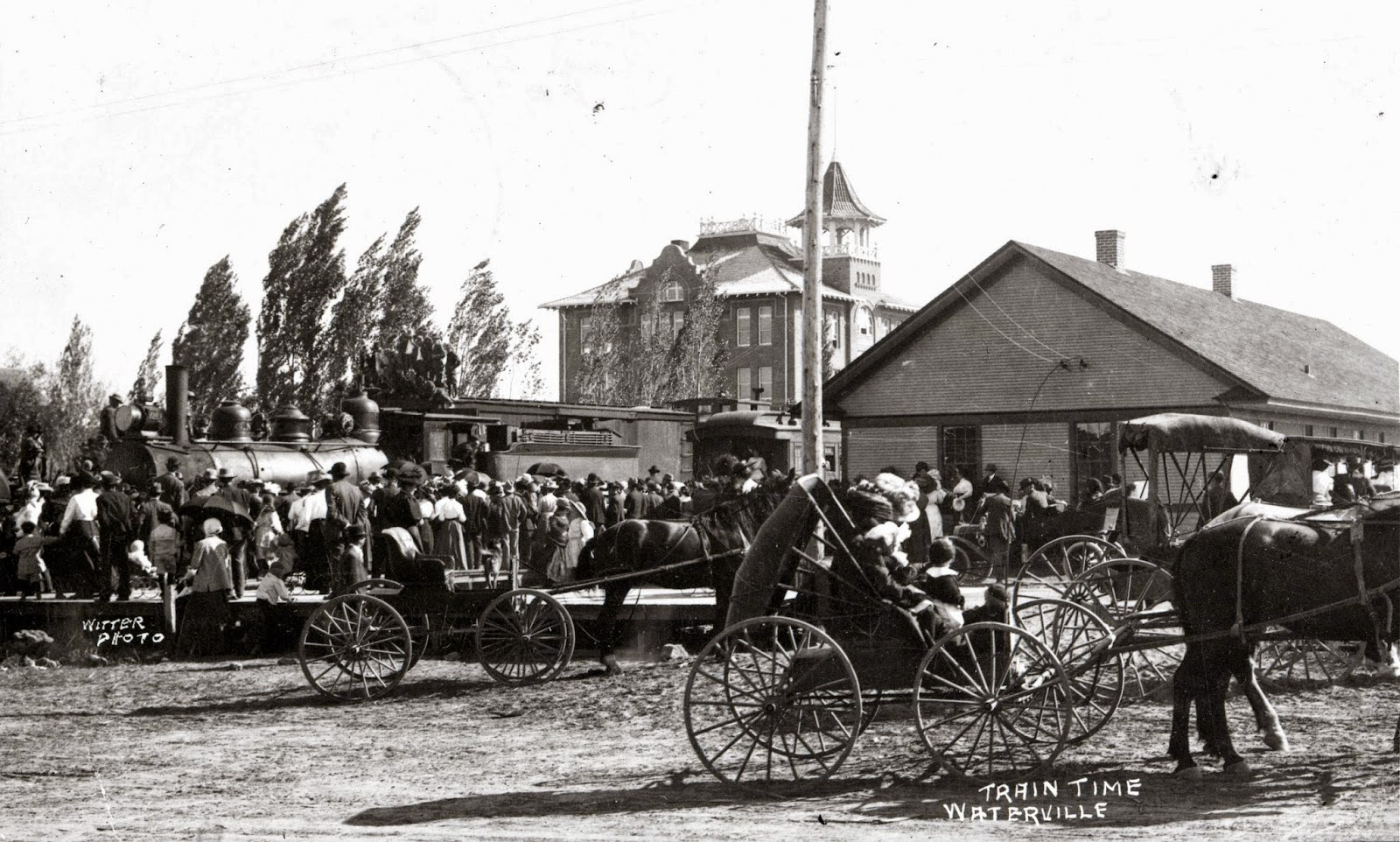 The boys leaving for World War 1 was a big event in Waterville. Though they were headed to the other side of the state for training, most folks figured this might be the last time they would see them so turned out to see them off. In this view looking southeast,  the Douglas County Courthouse can be seen in the distance.(Courtesy of Darrin Nelson.) 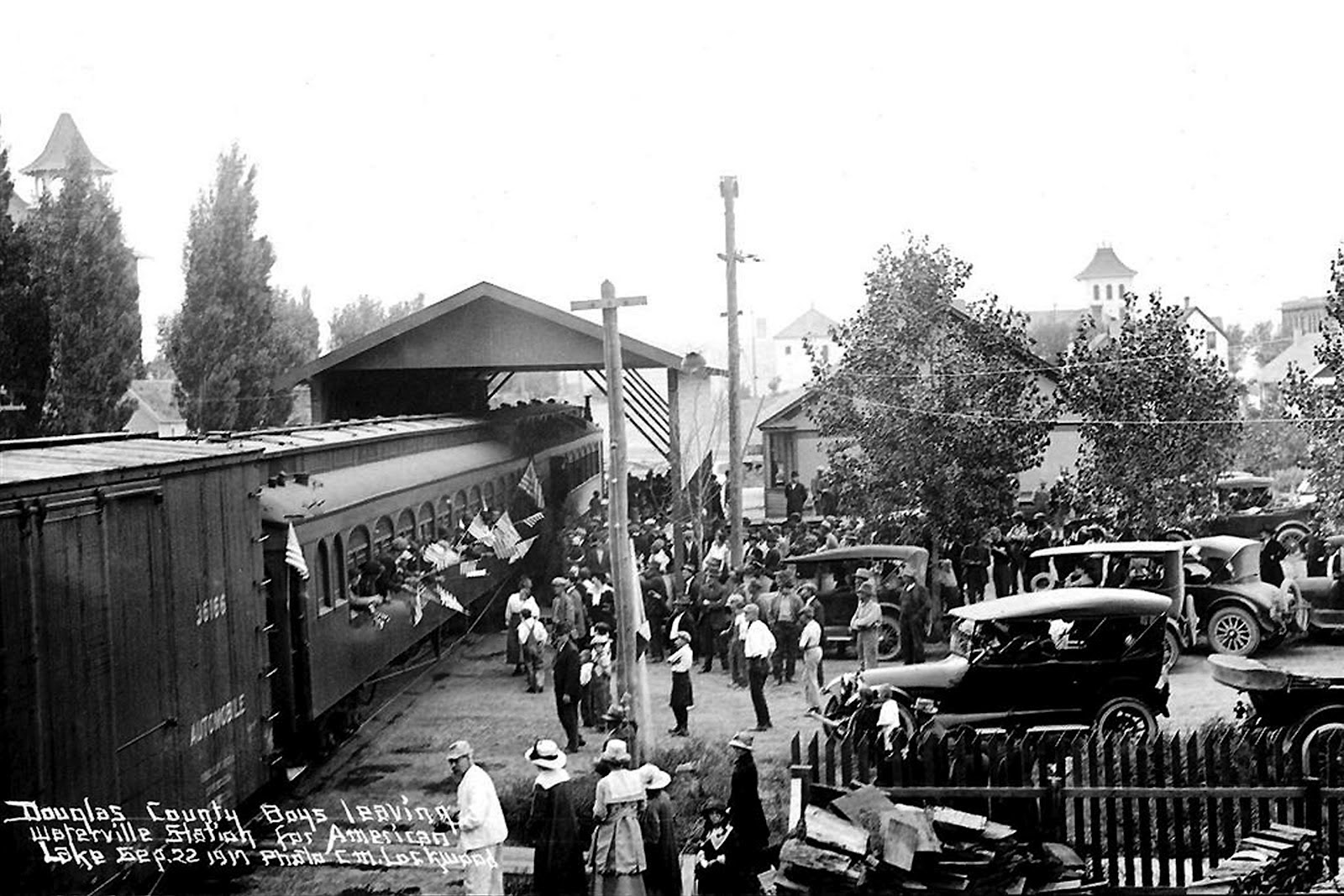 American Lake, in western Washington, was a base for military operations during WWI. This train  likely shows young men who are headed to the installation for training. Two coaches and the automobile boxcar mark this as one of the longer passenger trains operated on the line. (Photograph by C.M. Lockwood; courtesy of Harold Badten.) 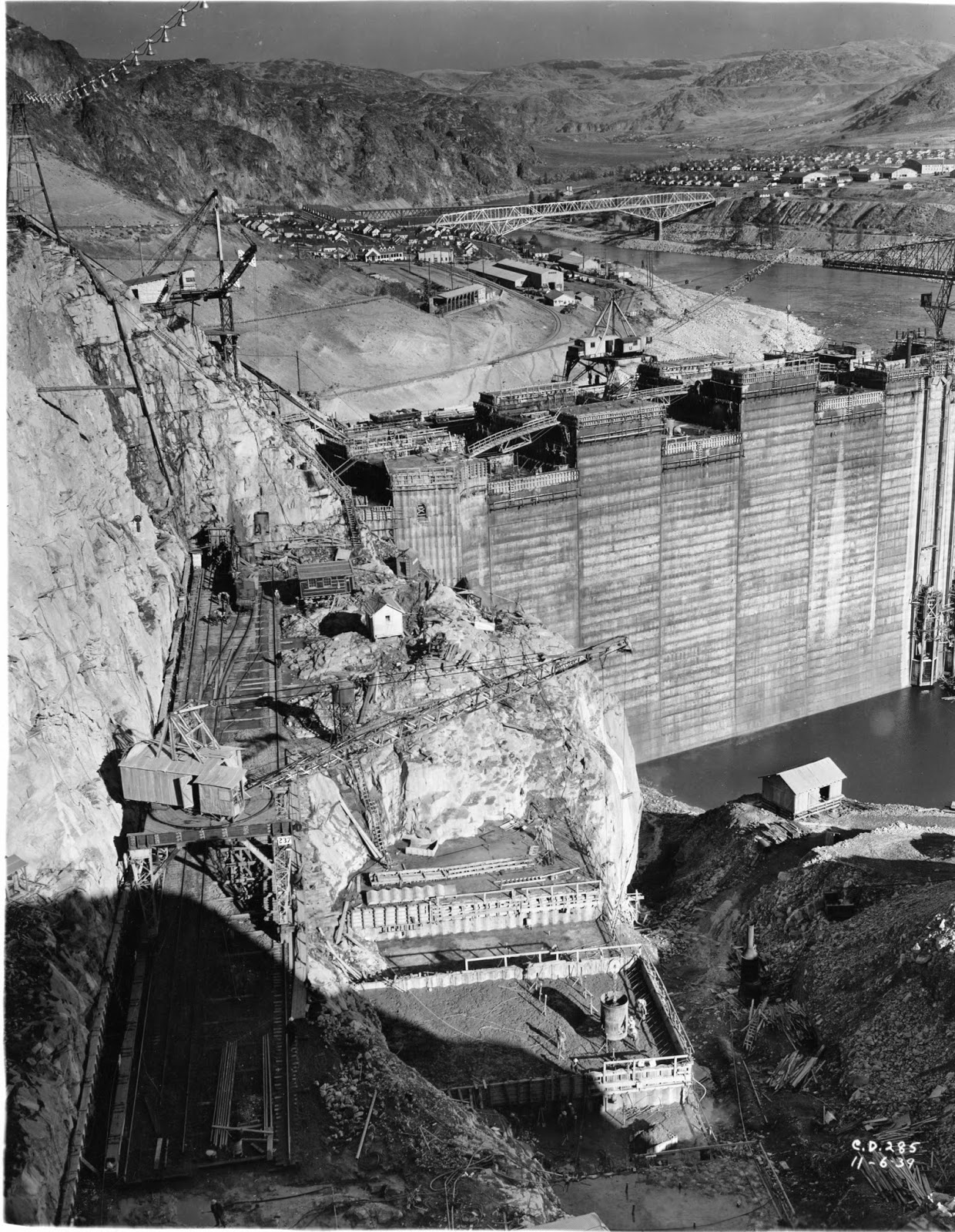 This view of the base structure of the John W. Keys III Pump-Generating Power Plant also shows the car skip just behind it, in line with the blocks of the dam. Also note the various railroad cars holding various loads. Sharp-eyed readers will note the penstock loads in the yard downstream of the dam, directly below the light colored bridge between the buildings. (Courtesy of the Hu Blonk Papers, EWU Archives, Image Number 5-13-11.) 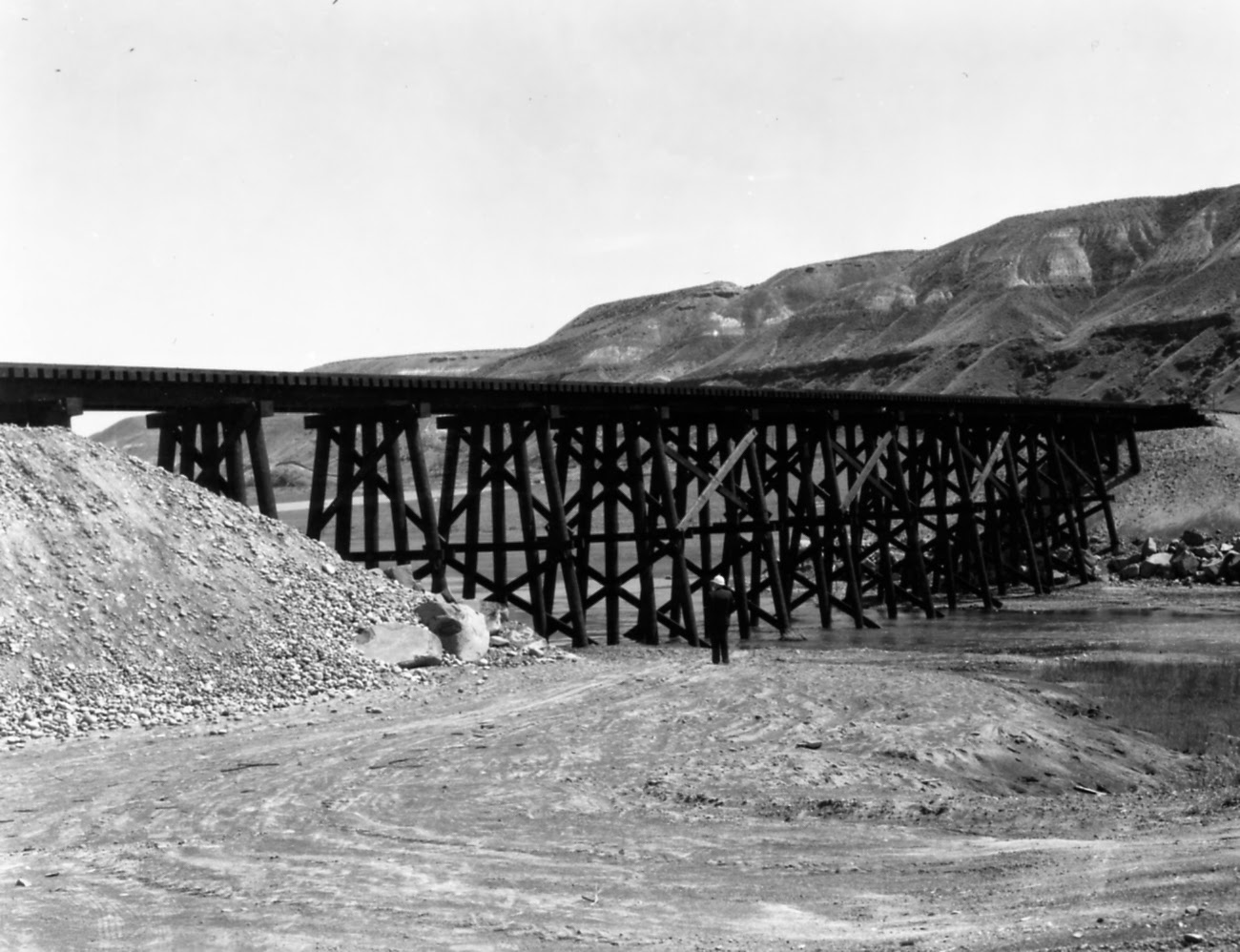 A supervisor looks over the recently completed bridge over Crab Creek, just off the mainline of the Milwaukee Road.  This was probably the last trestle of any sort built on “Lines West.” (Courtesy of the Grant PUD Archives.)

Great stuff as always. Thanks for sharing