I've been deeply engrossed in research recently (how anyone can ever be bored in the age of the internet is beyond me). The Northern Pacific Central Washington Branch was built based on the 1887 survey by engineer J.Q. Jamieson (sometimes misspelled Jamison or J.I.Jamieson). Jamieson was a very busy man in those heady days prior to World War I when railroads were being pushed into all corners of the country. He also had skill and a knack for locating railroads in difficult terrain. From 1885 until late 1887 Jamieson was the construction engineer on the Stampede Pass Tunnel, and then surveyed the CW branch. By 1895 he was chief engineer of the Astoria & Columbia River RR which was building east out of Astoria up the Columbia River to the NP at Goble, OR. 1901 found him back in the employ of the NP at Tacoma when he became the Division Engineer. Jamieson quit the NP again at the end of 1902 to help build the Western Pacific RR. 1905 found him locating the railroad in the extremely rugged Feather River Canyon between Oroville and the Nevada State Line.

The CW Line as located by Jamieson would have been a wonderful branchline with moderate grades and curves. Unfortunately for locomotive engineers and railroad accountants since then, a group of NP directors involved in a townsite company had sway over the final route of the as built NP Central Washington Branch. They rerouted the line to prospective townsites such as Hite, Creston and Hanson to resell the town plots at a great profit once the railroad was established. The deviations imposed on the route sharp curves, steep grades and extra mileage. The Jamieson Survey was to have maximum grades of 0.7% and maximum curves of 7 degrees. Instead the CW line as laid out by construction engineer C.F. Reardan has grades up to 1.5% and curves as sharp as 10 degrees. Even rival Seattle Lake Shore and Eastern was building a line with max grades of 1% compensated and max curvature of 7 degrees.

Today the Eastern Washington Gateway RR still struggles with the extra operational cost and difficulties caused by the detours. Attached is a map showing the westernmost of the detours with the approximated survey between MP86 and MP104. By rerouting the tracks northwest out of Almira, an extra 123' of elevation that had to be climbed to surmount the ridge between Hartline and Almira over the route of the Survey. The Deviation also added some extra miles to the line as well. For whatever reason, the directors involved in the townsite business like to place towns at high point, such as Hanson. But this really does not make sense as there is a scarcity of water at those lofty points, and the townsites are exposed to wind and harsh weather conditions. Little wonder that the "town" of Hanson never developed beyond the grain elevators occupying space along the railroad siding intended for the town. BTW, the location now known as Cement at the far west end of the detour was originally known as Patterson, and may have been another one the townsites that failed to develop.

The as built CW branch also varied greatly from the survey between Teleford (a.k.a. Fellows) and Govan (MP57 to MP81 on the CW line). The surveyed line featured light grades (0.2%) and curvature with only one summit, but was replaced with the worst grades and sharp curves on the as built line. Even where the CW line followed the 1887 survey, the cheap, rushed construction failed to follow the standards set in the 1887 survey, eschewing deep cuts and tall fills or trestles that would have eased the grade and curvature. Today trains struggle to climb the 1.2% grade out of Wilbur and bite at the sharp curves in the grades going in and out of "Cougar Canyon" east of Webb. Jamieson specifically sought to avoid the steep grades and heavy rock work that would be required along the current route by swinging to the south and following Sinking Creek to Govan. Map 2 clearly shows the route.

Perhaps the most frustrating part of the deviations from the 1887 survey was between MP12 and MP 26 on the CW Line, where a virtually flat and tangent route was replaced with the "Roller Coaster", as the section from Reardan to Deep Creek is known. The current route is 4.5 miles longer than the survey and features multiple grades of up to 1.2% and curves as sharp as 10 degrees. Included in this is a drop of 227' from a point near Hite to Deep Creek. That may not sound like much in a standard automobile, but for a 8000 ton train that works out to 3.6 Billion foot-pounds of force required to climb that distance. According to notes, the grade was virtually complete along the route of the 1887 survey in 1888 and ready for track when the NP directors changed the routing to benefit their townsite at Hite (which failed to develop).

The CW line was far from the only part of the NP to suffer from short-sightedness on the part of NP management of the time, as that was the case during much of the early history of the railroad. NP struggled to turn a profit for years due to the high operating costs imposed by this kind of half-assed construction, and it would take hundreds of realignments to make the mainline acceptable. But the CW Line never benefited from those realignments, and the track remains where C.F. Reardan placed it 128 years ago! 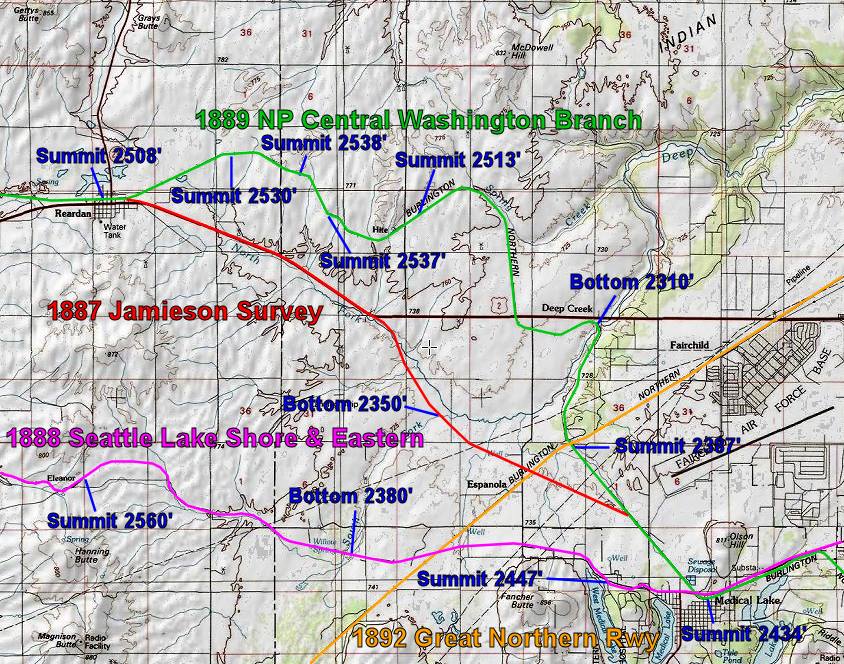 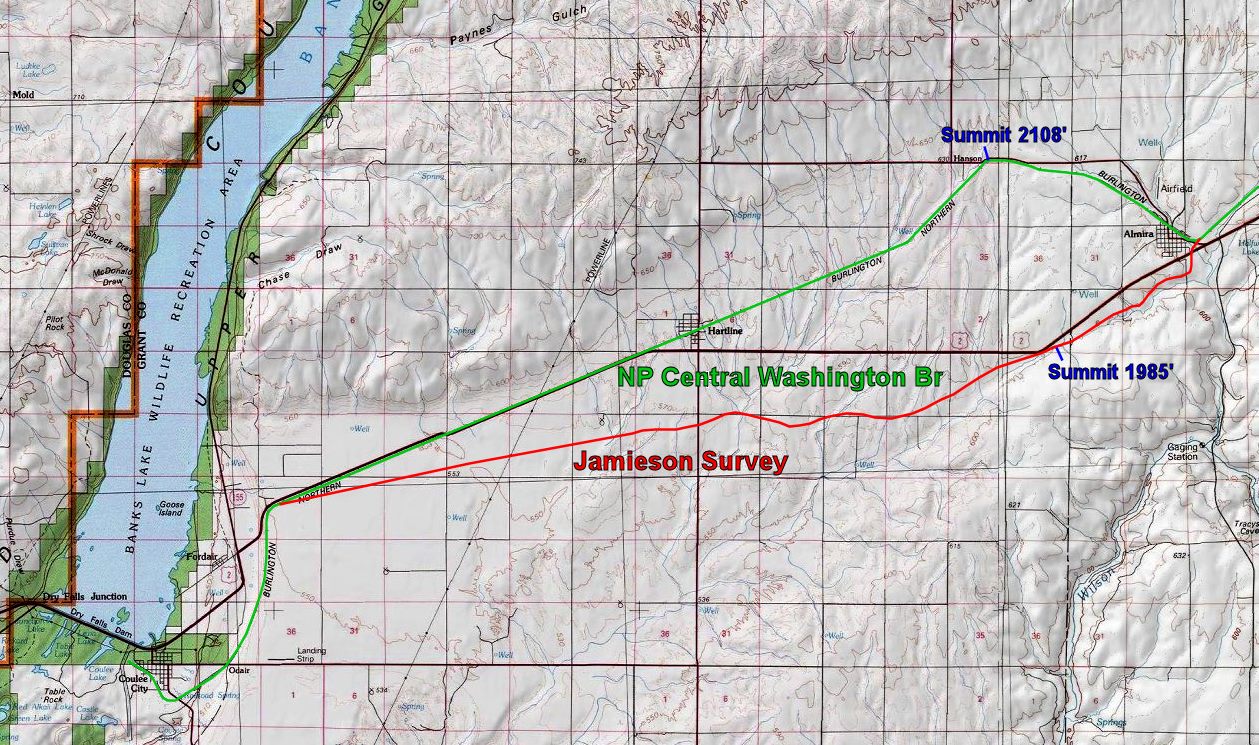