Notes On The Siding Of Gibson

Thanks to Bob Kelly for digging up some info on this siding.

Started as a late GN project and finished as an early BN project.

He had Doug Complin look at the actual AFE for the project in St. Paul. Doug replied with "I looked at that AFE and the reason given was to prepare for CTC.  There was an existing siding 3 miles east in Irby.  The new siding was to be 10,447 feet long and the old siding was removed."

John Langlot adds:
"The siding was named after two brakemen.  The company had already selected a name but when Dale Gibson lost both legs at the Kaiser Aluminum plant at Mead, WA. and George Gibson was killed about a mile west of Stratford on the bridge abutment, we partitioned the company to name the new siding after those two men.  When they put in the siding at Gibson they took out the siding at Irby so you ran from Odessa to Gibson. My good friend and old braking partner Gene Sponcler was George Gibson’s braking partner on that trip.  Gene passed away two years ago today 1/25 2016.  I lost a good friend who I worked with for several years in our braking days. Gene was a member of the GNRHS and River City Modelers Model Railroad Club"


Dave Sprau adds:
"It was a new siding, replacing Irby when the line was CTC'd in 1971.  It was not put in service until 1971 and Irby siding was converted over into an industrial track.  I was told at the time that the name Gibson was a commemorative for a brakeman who had been either injured or killed shortly before that, but I dont have any real confirmation of that info.   It was an unbonded siding when it was put in, as were all ctc sidings on the GN - meaning the rails were dead, no track circuits in them,  and the signal you got to go in the siding was a red over lunar, meaning proceed at restricted speed - prepared to stop short of anything that might be occupying the siding.

"The SP&S at the same time, CTCd some of their main track, and they put in all bonded sidings; much better - - -  if the siding was clear a train got a red over yellow to head in, and if perchance the signal at the other end of the siding was also lined up to leave the siding, the head-in signal was red over green.   In either case no need for restricted speed and it was safe to presume the track was clear to the next signal (and beyond that, if you are going in on a red over green).  I presume that by now with improvements BNSF has made, Gibson is probably bonded and they have gotten rid of all the red over lunar indications, which would indeed be a big improvement.  When I was still working in early nineties it was still un-bonded."

One engineer on the line now stated that it is the only bonded siding on the subdivision. 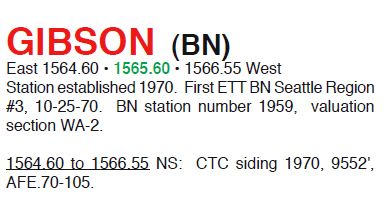