In order for the construction of Grand Coulee Dam to be successful, the planners knew that a railroad would be the best option for bringing in supplies. A big concern was where to stage those supplies, and initial plans had them on the sloped bench on the east side of the river, immediately downstream of the construction site.

Railroaders like as level a track as possible; it’s easier for locomotives to start and stop trains. The problem with the dam site was a big elevation change. At the rail head at Odair, the elevation is 1676 feet. The current town of Grand Coulee is at 1520 feet. Coulee Dam is at 1150 feet. The distance from Odair to Grand Coulee allows the elevation change to happen gradually, so it’s still easy for trains to run. The drastic change from Grand Coulee to Coulee Dam happens in a short distance, and in a dramatic way.

The surveyors for the railroad developed a way down to a point on the river where a bridge could be used to get to the staging site. The curves would be sharp, but not unreasonable. The east-side bench was envisioned as the location of the concrete mixing plant, machine shops, warehouse, affiliated structures, and the MWAK field engineer's office at the 1020-foot elevation level. A steam shovel was put to work leveling off the 5- to 10-degree slope for this plan.

On October 29, 1934, plans were announced by Harvey Slocum, construction superintendent for MWAK, for a 150- to 200-foot-long tunnel, to be bored through a solid granite mass, northwest of the Engineer's Town site. The tunnel was to be located about 100 feet from the spot where the construction contracts for two adjoining railroad right-of-ways were to meet. One was being built from Odair to the damsite by David H. Ryan, and the other by the Spokane construction firm of Crick & Kuney, which built the remaining grades around the damsite, among other things.

The tunnel was necessary in order to do away with a nearly impossible turn along the outside of the 800-foot, solid rock wall. By making the tunnel, no sharp curve would be necessary. Locomotives and cars would then be able to run along the outside of the mountain of rock to a curve near the river, over a railway bridge, and then along the 1020-foot level on the east shore. Bridge construction had started back on October 1 and had finished 2 weeks later.

Tunnel construction kicked off on November 29 with crews jack-hammering and blasting the granite face on the south side of the tunnel. By December 7, the bore hole was large enough that it was beginning to get dark inside in the daytime.

After the first of the year, crews were about 35 feet into the rock. The muck was being hauled out by wheelbarrows. Behind the drillers, a group of carpenters followed who were timbering the roof. It was assumed that the tunnel would be completed in another month, and that together, the tunnel and grade below would consume two months total.

The weather at this time had been around negative-5 degrees, with a biting wind. Night-shift workers claimed it wasn't any fun to face the cold blasts, and one of them swore to “never leave Santa Barbara again” once this job was completed.

About March 11, work was resumed after being shut down for roughly six weeks to provide more men to work on the cofferdam. By this time, 85 feet had been completed. From the north end of the bore, the grade outside of the tunnel had been leveled off to the bridge. Workers were reporting that the blue granite, through which their jack hammers were biting, was the hardest rock they had ever worked with. Frequent re-sharpening of tools and a minimum feet-per-hour was caused by the hard rock. The project overall was not being hurried to completion at the time, since there were no scheduled shipments of cement to the dam site until the latter part of the summer, at the earliest.

The crews had not used the typical method of boring a small-diameter hole the entire length of the tunnel and then expanding that bore to full tunnel size. The tunnel was instead blasted and hammered partway, then the small-bore method was used for the second half.

By May 13 there was roughly thirty feet to go. Drilling and blasting continued, making up the full size of the tunnel, and a week later, the entire bore was completed. It was 20-feet high and 15-feet wide. It was also on a 5% grade, meaning the tracks would rise five feet over a distance of 100 feet, which is very steep for a railroad. This is why logging locomotives were to be used, since they employed a gearing scheme to compound their effort in pulling loads up a grade, sacrificing speed for pulling power.

The mainline to the tunnel was stub-ended a short distance from the portal, a few railroad-car lengths beyond a switch that led to a track at a lower elevation heading towards the dam. That switch led to the line past the site where the Green Hut Cafe and the Visitor's Center would eventually be located. This track eventually made it all the way to the west side of the right powerhouse.

Other project changes included building the staging yard near Electric City, with the railroad delivering finished items to the construction site via either the car skip or the switchbacks. Cement unloading was constructed above the dam and a series of pipes moved the powder to the mix plant on the west side of the construction face. Limited rail access to the east side of the dam was made via the construction trestle over the face of the growing dam.

Today, a small sign in the parking lot for the Coulee Dam City Hall marks the location of the tunnel. Access means crawling through the brush, crossing Fiddle Creek, and then climbing the slope to the tunnel. Both ends have been fenced off, as rock does occasionally fall inside the bore. The grade on both ends of the tunnel can be followed, but below the tunnel, the grade edges private property boundaries. The curve at the bottom of the grade toward the bridge location has completely changed and traces are hard to find anymore.


The granite bluff with the tunnel through it can be seen on the left side of the photo, just to the right of what is now the Coulee Dam City Hall. The grade from the tunnel to the MWAK bridge on the right is very evident.

A portion of penstock is being trucked over the MWAK bridge. Near the uppler left corner, the tunnel can be seen. Note you can see daylight through it at this angle. 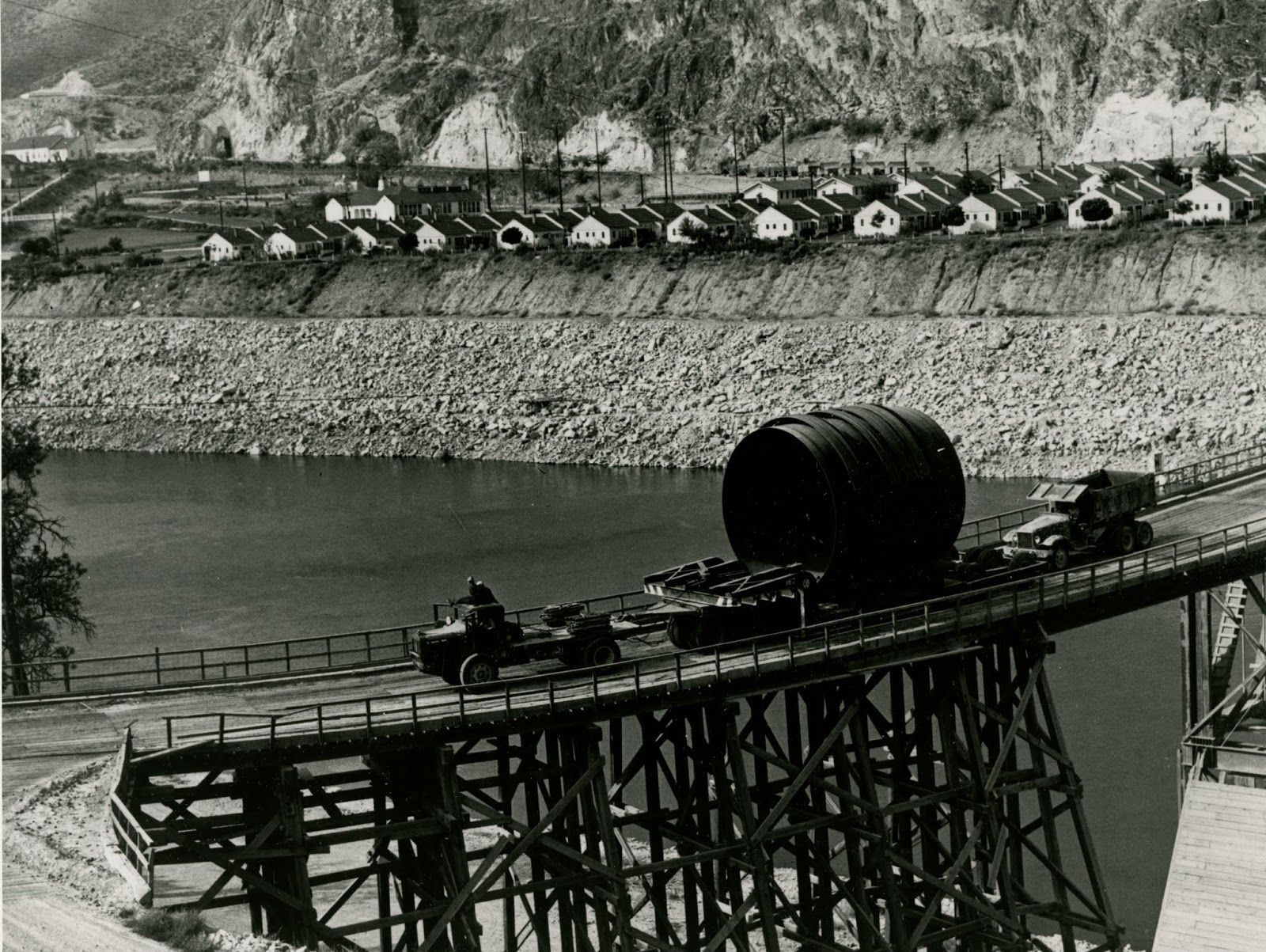 Classic view of the tunnel as looking toward the east bank of the Columbia River. The trestle in the foreground is crossing Fiddle Creek. 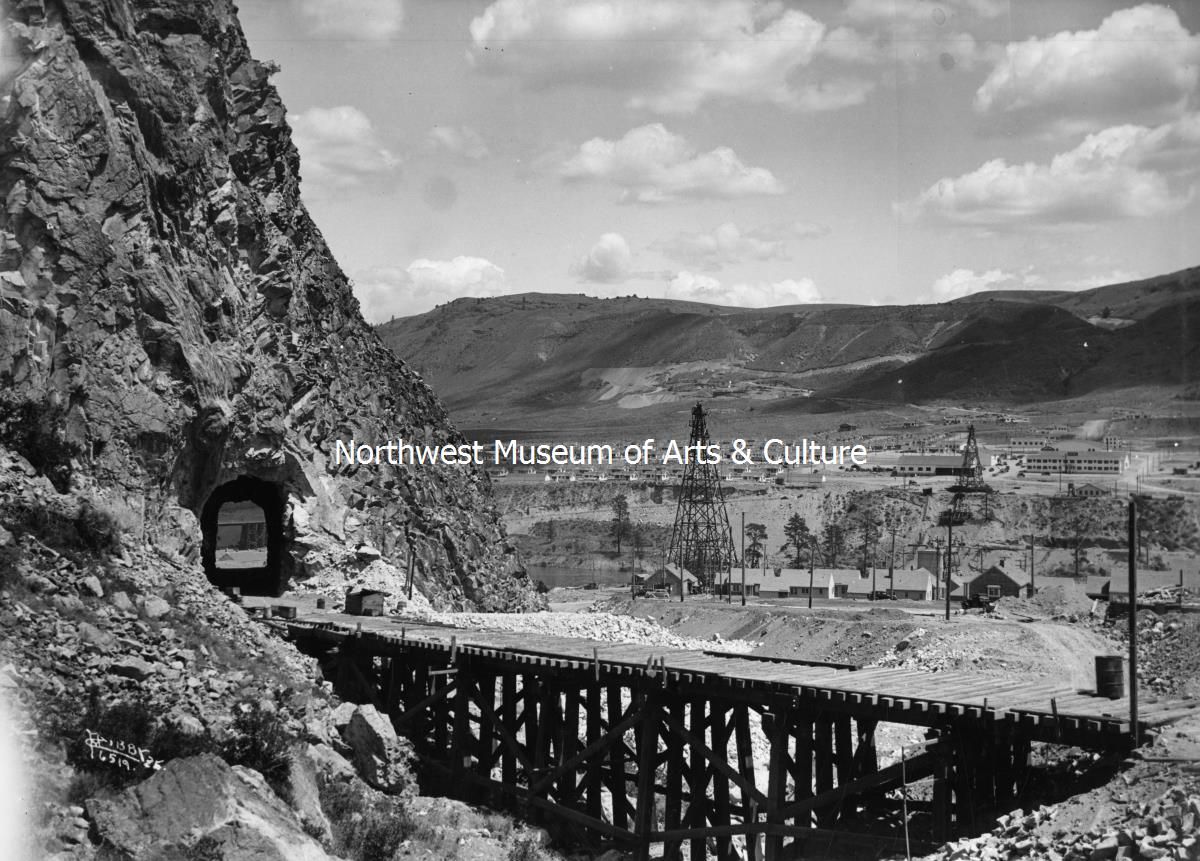 Current view of the tunnel, looking towards the east bank of the Columbia River. The metal bridge over the river can just be seen between the telephone poles. 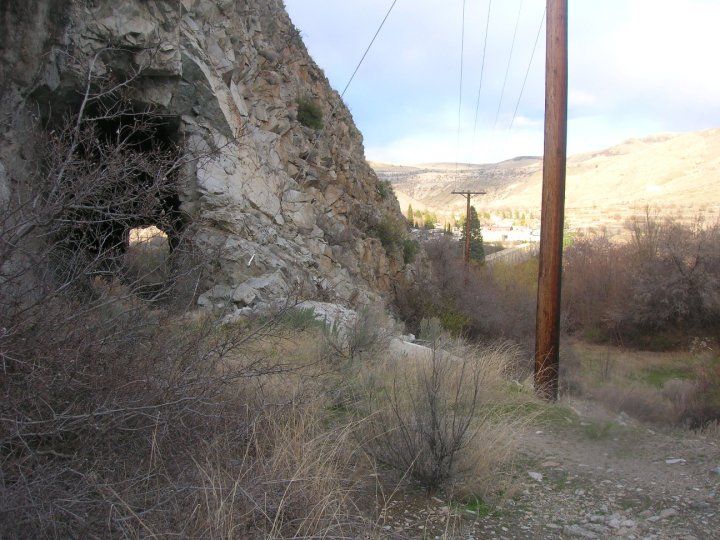 View through the tunnel from the north side, looking up the grade. 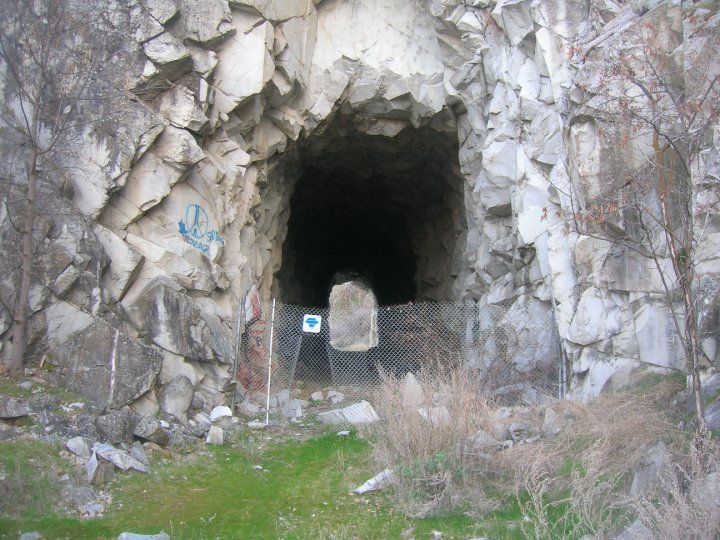 View of the granite rock through with the tunnel passes. 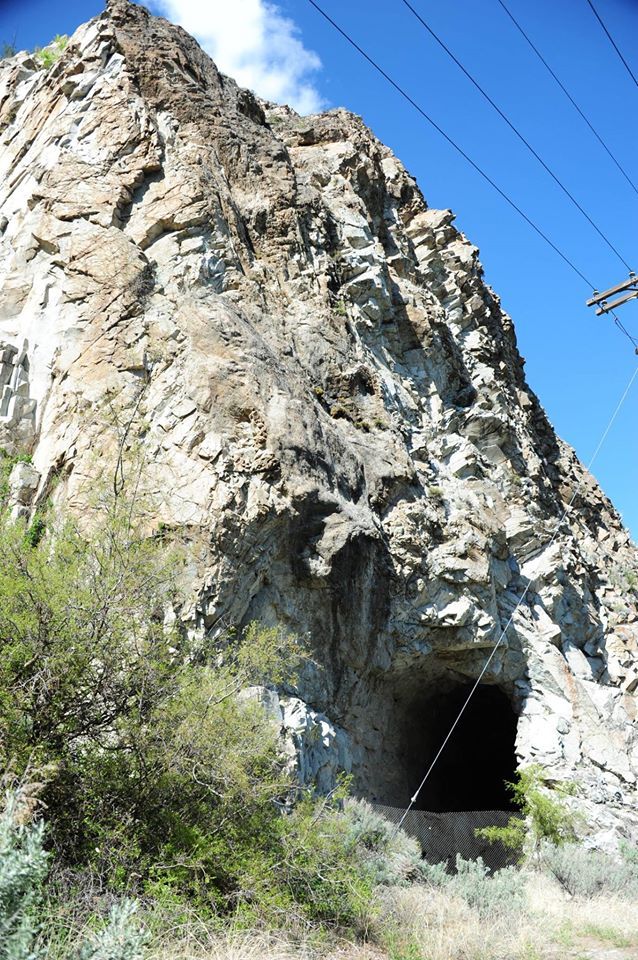 View of the tunnel from the south side, when peering through the chain link fence. 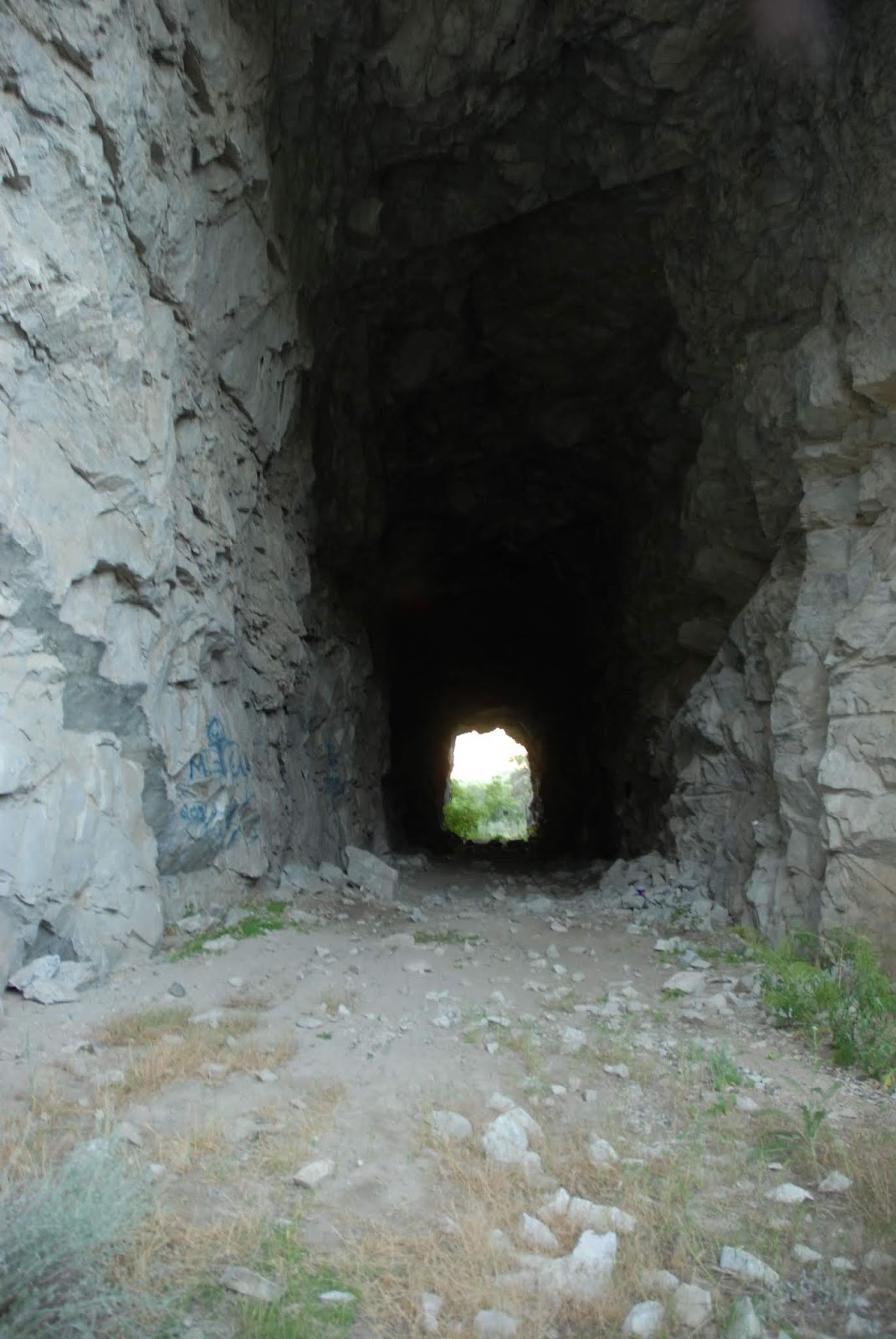 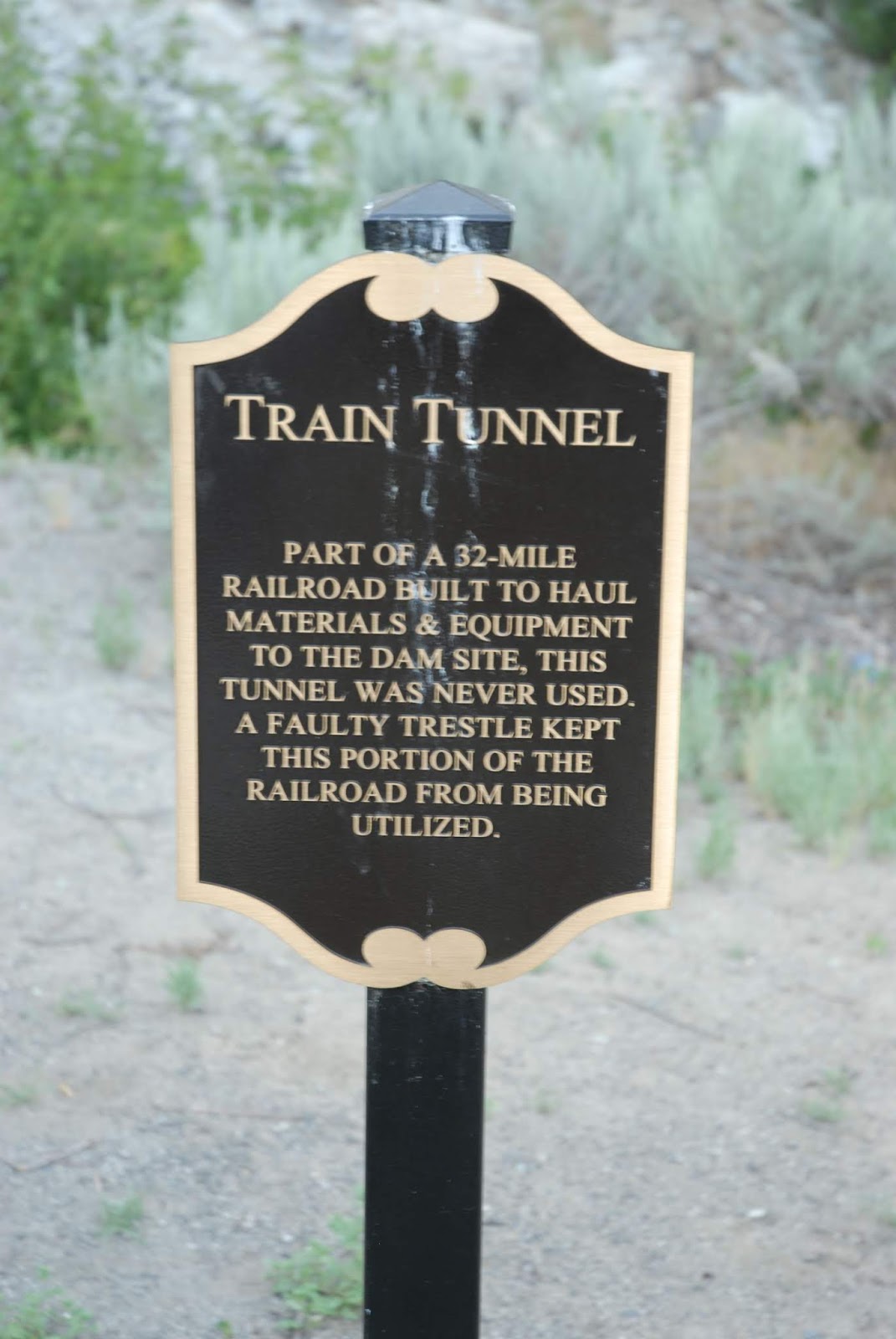