She was leaking, water, badly. No outward signs of where. Only a hairline break at the neck of an intercooler water pipe. Too small to be the true culprit. Jeff Wall, Washington Eastern’s hands-on “locomotive healer” and autodidactic extraordinaire, and I change it out anyway and send her on her way. Next day: more investigating. Jeff’s gut feeling: “Gotta be inside the engine … shut ‘er down.” Long-hood doors are opened exposing her all-too-familiar blackened-oil-streaked 10,000 cube 645 prime mover she previously received from a donor unit. Those round hand-hole (inspection) covers, unmistakable. Off they come. Airbox covers are first, and just as quickly there’s a shout from Jeff’s right-hand-man, Steve. “Foun-dit!” Indeed, he did. It appeared a cylinder liner was weeping water, profusely. Not good. But most likely a cylinder head gasket. We hope. “Take ‘er to Davenport. She’s done for now.” There Jeff and I dive straight away into the task at hand. Tools are readied. Not just any ol’ tools, but TOOLS to pull the hulking EMD “Diamond Five” P/N 9556060 head! But off comes her jewelry first: rocker arms, fuel and oil lines, injector, etc., and finally the four 2-¾” crab nuts torqued to 2400 foot-pounds that keep the incredible compression in check (note the well-oiled torque specs in his shop shirt pocket). Jeff, like Thor Mjölnir, wields the massive NAPA-supplied impact wrench into place and waits for the air compressor to build air as the relentless August sun beats our backs like a seasoned blacksmith his anvil while our faces absorb the sun’s stream of hot punches: thermal radiation emitted by the tons of sun-soaked steel. The pungent-heavy odor of engine and diesel oil, sweat, and spilled, spoiling wheat hangs like a dead man in the sweltering air. Red-faced, arms and hands and elbows greased, tensing every muscle from head-to-toe he unleashes the pneumatic wrench. It jumps, jolts, and jerks, but he’s got an iron grip on it as its internal hammer pounds the anvil in deafening staccato cracks and soon the stubborn nut gives and spins lose. The process is repeated three more times and with the test-cock removed the head is popped loose, slipped off of the cylinder liner studs and out with a forklift. It becomes immediately clear that the head gasket is shot. In short order, after some cleaning, the new Master Packing made with DuPont Viton gasket is carefully guided into place. Some additional inspections and cleaning are carried out to ensure all is well and the disassembly steps are reversed. In an hour’s time, the 40-year-old former “Fast-Forty” (nee-UP 8079, ex-UP 3588), retired some two decades ago by Uncle Pete, is ready to take water, crank up, and go back to work hauling grain, thanks to all-American git ‘r dun spirit, and trusted vendors like NAPA and Master Packing. It's what the Right Stuff is made of. 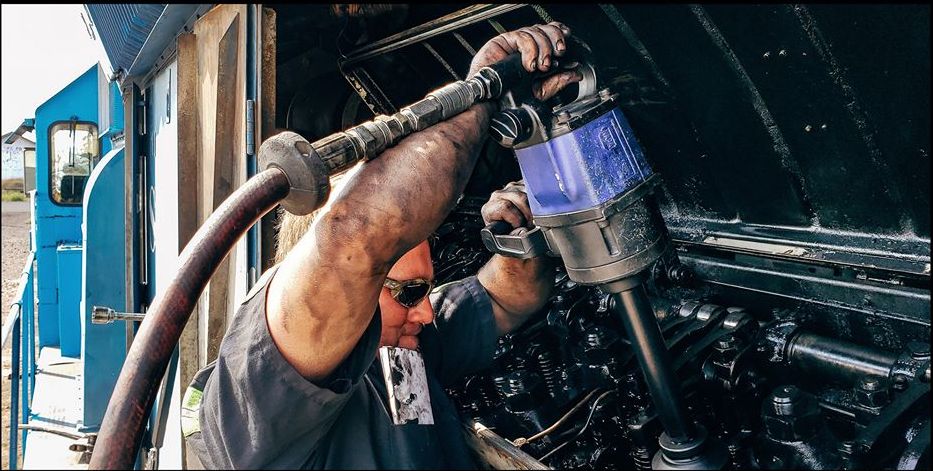