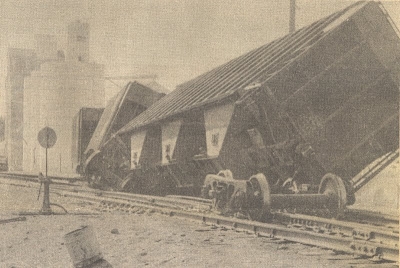 "Two Burlington Northern loaded wheat cars were derailed Saturday morning at the Central Washington Grain Growers elevator in Coulee City. One of the cars tipped nearly on its side and the wheel sections were broken off. Several section of track were bent. A switching error apparently caused the mishap."

I never had the chance to see the wreckage, but I did see a few events unfold later. One was the train that left town with the wrecked cars. It was really obvious which two were in the accident.

Next thing I saw was a full section crew, the only time I ever saw one during my years at Coulee City, arrive to lift the old Coal Spur No. 2 track. My viewpoint was from the long-gone Coal Spur No. 1 track bed. One big fellow said they needed the rail to replace ruined rail where the accident had taken place.
Posted by SDP45 at 4:51 AM