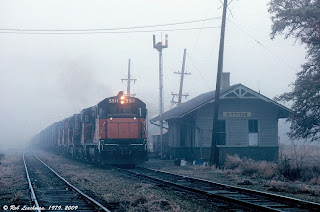 Rob says: "Radio chatter indicated that the crew on the DFE would run out of time before making it to Othello (which sadly was typical towards the end). The radio conversation was a little garbled but we could hear the DS say a crew van would be waiting for the train at Kittitas. Blair and I pulled in at Kittittas, found the crew van waiting at the depot, and set up for a shot. Much to our surprise (and much to the surprise of the relief crew), the DFE burst out of the fog and barreled through town at track speed, making a run for the Saddle Mountains grade." 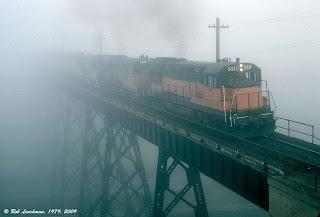 "The hogger had the U Boats in Run 8 as they popped out of the heavy fog and pounded across Renslow Trestle. Not bad again!" 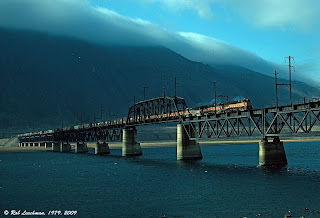 "We then drove over to Beverly (as did the crew van) to await the train’s crossing of the Columbia River. Blair and I were thrilled to find that the fog bank ended at the crest of the Saddle Mountains, leaving the Beverly Bridge sunlit in front of an ominous dark mountain with fog streaming over its top. With a heavy set of air on the train in deference to the 2.2% grade, the Dead Freight East started to bog down on the level track across the bridge, so the engineer notched out the units to get the train into town. As I fired the motor drive on my Nikon, the bridge, train and orange units topped off with graceful exhaust plumes were lit up against the dark background. Wow! This spectacular run-by is a great way to remember Lines West." 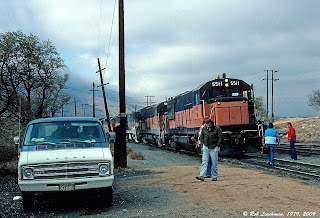 "Crew change at Beverly. Walking towards the van is the inbound conductor, the late George Katalinich. The inbound engineer is just about to dismount U28B 5511. Meanwhile, the relief crew strides over and prepares to take charge." 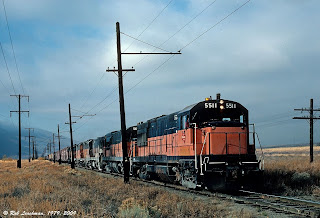 "With the new crew in command, the Dead Freight East departs Beverly, rolling under remnants of the electrification." 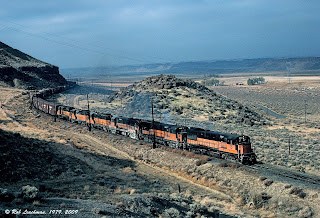 "We chased the DFE towards Othello using the gravel road through the Crab Creek Valley. There were enough slow orders on the track to make this quite feasible. The fog was lapping over the crest of Rattlesnake Ridge, sometimes blocking the sun but sometimes providing marvelous edge-lighting. We lucked out with respect to the light as the train skirted the Smyrna Cliffs near Royal City Junction." 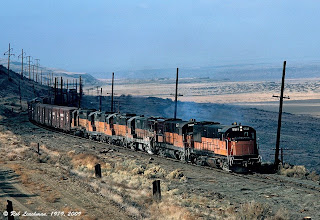 "We lucked out again at Corfu, the units slipping into a sucker hole of sunlight as they passed before us. The siding was gone, and the north-side trolley poles had recently been chopped down. Again, the railroad was seemingly being pulled out from under the train." 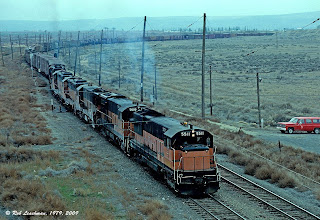 "Our luck with respect to sunlit scenes finally ran out at the west switch at Othello, where we photographed the DFE entering the Yard after the sun had retreated behind the clouds. The red Milwaukee Road yard van waits at the far right to pick up the rear end crewmen.

In the crew register room in the Othello depot, I noticed that the relief conductor and engineer recorded the miles for a round trip to Kittitas instead of a round trip to Beverly. I confronted them about this, asking why they were squeezing money out of poor old Milwaukee Road that they did not really earn. You can imagine the epithets hurled at me in response.

But aside from that exchange, if railfanning the Milwaukee had to come to an end, this day was the way to end it. Wow!"

So if the crew deadheaded by van from Othello to Kittitas, then back (over?) to Beverly, then rail from there to Othello, sounds like they booked the miles they ran off and earned. Just another day on the extra board.

Keep up the good work