The Dam Railroad Bridge That Couldn’t

In 1934, the MWAK Co. was the main contractor in the construction of Grand Coulee Dam. Their job was to determine the logistics of moving items to the various locations needed around the dam site. One of the decisions made was to build a railroad bridge.

The bridge was to be located far enough downstream to be at a reasonable height above the river, yet at a level that would allow ordinary operation of the railroad.

The site chosen called for the construction of the track from the beginning of the switchback to the right powerhouse along the sheer granite rock wall on the northwest side of the model engineers’ town, through a 200-foot granite rock tunnel, to the river shore, all along a maximum 5% grade.

The contractor announced that the bridge itself would be constructed in fourteen days, and started on October 1, 1934. On that day, area citizens would see a 7700-pound hammer for the pile-driver starting to embed long wooden posts into the river bottom. No one at the time would believe the contractor could construct such a span in two weeks, claiming that the news was just a way for the project to grab headlines. In fact, scheduling was tight. Pile-drivers were only scheduled to work on the bridge for ten days.

The short time span to finish the bridge was made to coordinate with the finish of the railroad construction contract by David H. Ryan from Odair to near the dam site, and the one to connect from there down the hill by James Crick and Max Kuney.

Further talk of the project had the contractor completing it within a week. It was said that carpenters would follow the pile-driver across the river, thus when the last log was driven, it would only be a matter of hours until the span would be open to traffic.

After the bridge was opened, it was found that a neighboring wooden pile trestle closer to the river level would be inundated by the rising waters of the 1935 spring run-off. As such, the MWAK bridge was given safety modifications for public use, which began on April 1, 1935.

By mid-June, reports said the laying of railroad track would soon reach the bridge. A July report stated the entrance to Mason City from the bridge was closed as work was started to widen the nearby bank for the railroad grade, since the curve off the bridge was too sharp for the locomotives. Work continued into August.

The speedy construction of the bridge was called into question in October as the bridge was closed to allow the repairs of a pier, which had slipped, causing the shifting of the deck. Doubts were raised at that time if the bridge would ever be used by the railroad, as there remained very little shipping from the west side to east side, and the east bank side was turning out to be very unstable, causing concern that it could hold up the track with a loaded train on it.

By January 1936, word from MWAK came that it did not plan to use a railroad to bring material to the east side of the river, as originally intended. With the heavy work along the back of the engineers’ town, the costly tunnel through very hard granite, a nagging slide area near the tunnel, and then the instability of the bank on the east side of the bridge, it was decided that anything needed on the east side could be hauled by trucks.

By the end of the MWAK contract in 1938, it was thought the bridge should be removed before the next contract was signed. There was some speculation that the next contractor would remove it, provided MWAK made arrangements to do so.

Most of the grade on the west side of the river, including the tunnel, is still visible today. The approaches to the bridge are largely gone and forgotten. At some point, the remaining piers were removed, leaving no trace of this bridge today.

01 The bridge construction starts by building a pillar for the pile driver. 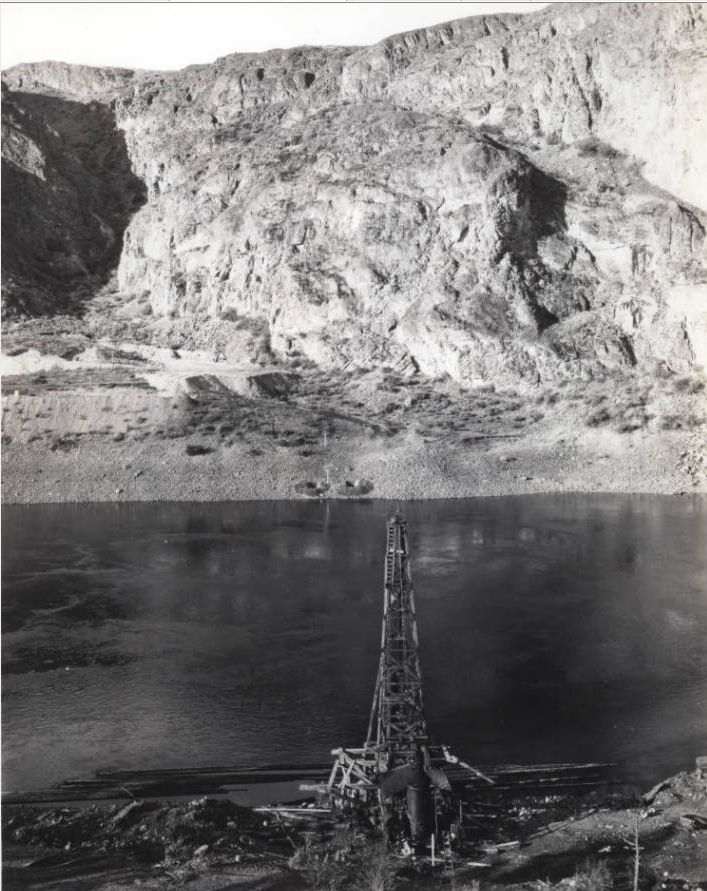 02 The bridge is about half way done. Note how low the river is. 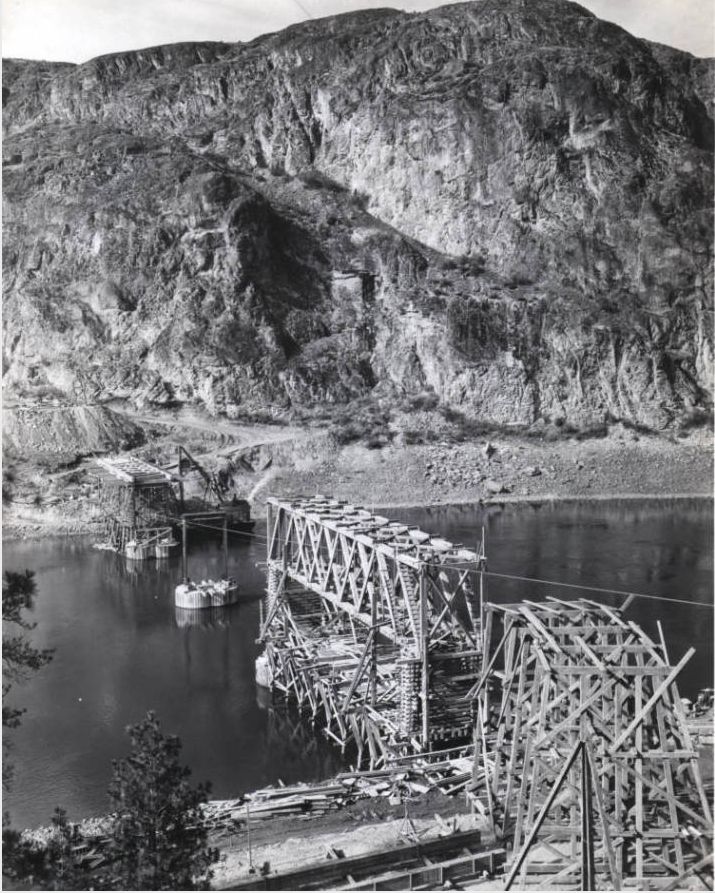 03 The main structure is nearly done 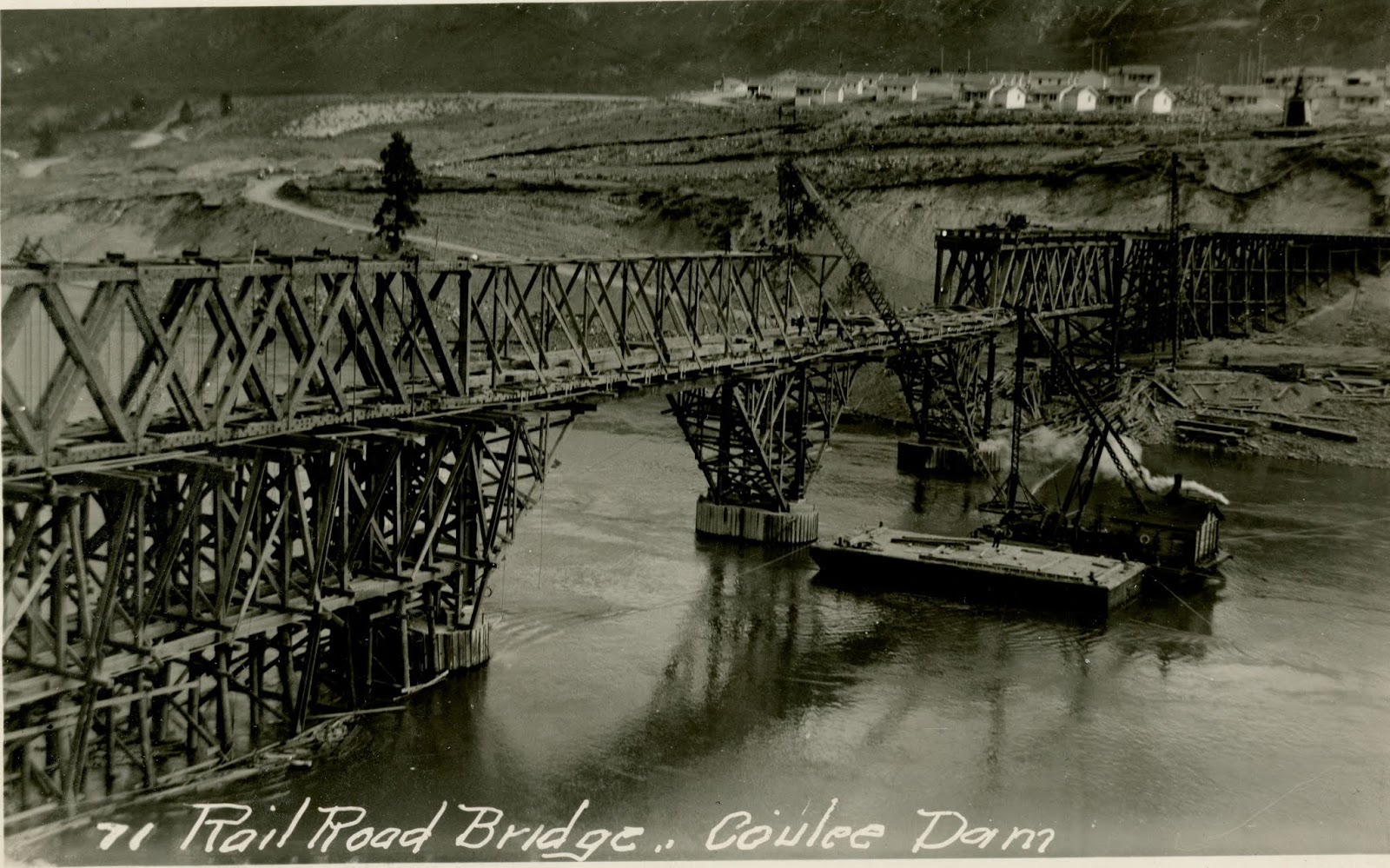 04 The completed bridge. Note the gentle curve of the railroad grade coming off the lower left of the bridge. 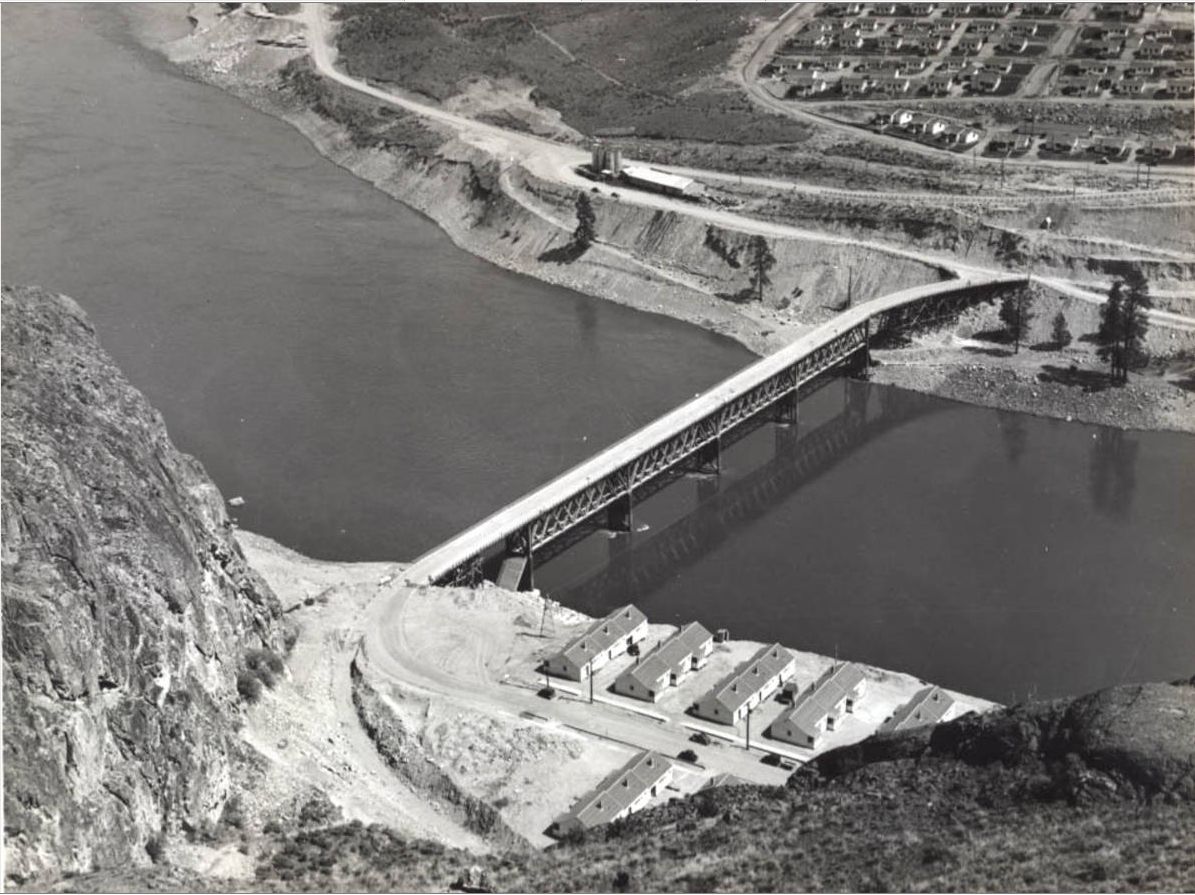 06 The completed bridge. Note the two pillars upstream that show where the state highway bridge will be built. 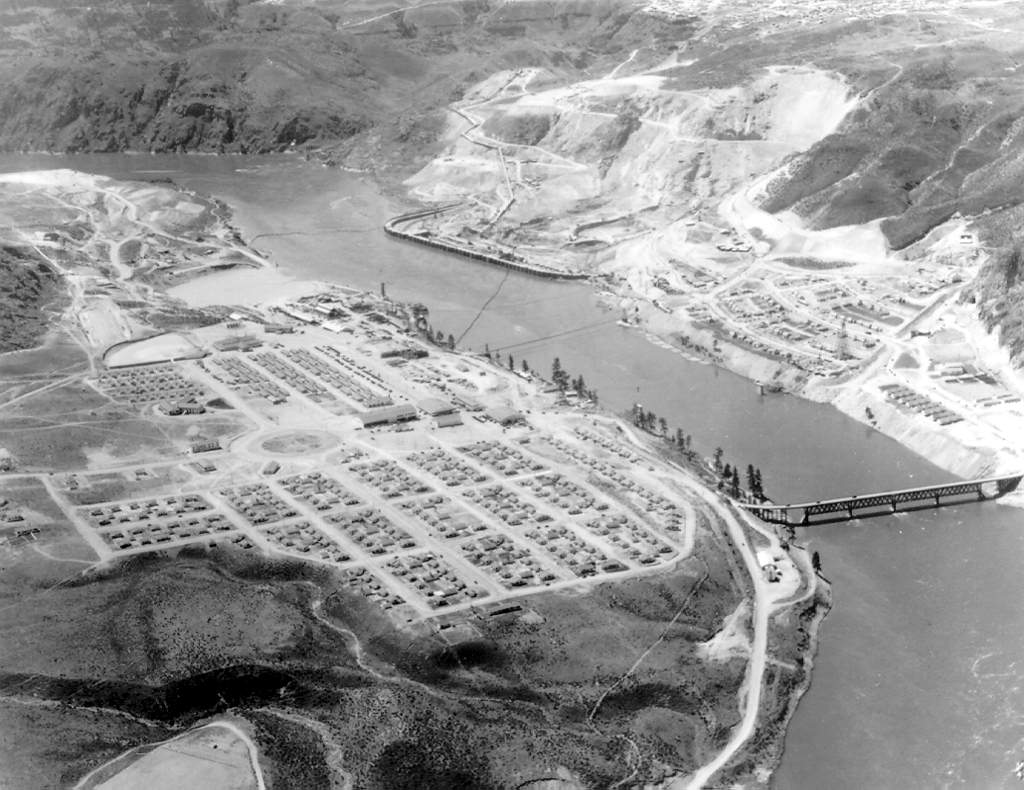 07 The completed bride with the now complete state highway bridge upstream. Note the railroad grade along the edge of town. The tunnel can even be seen in this view. 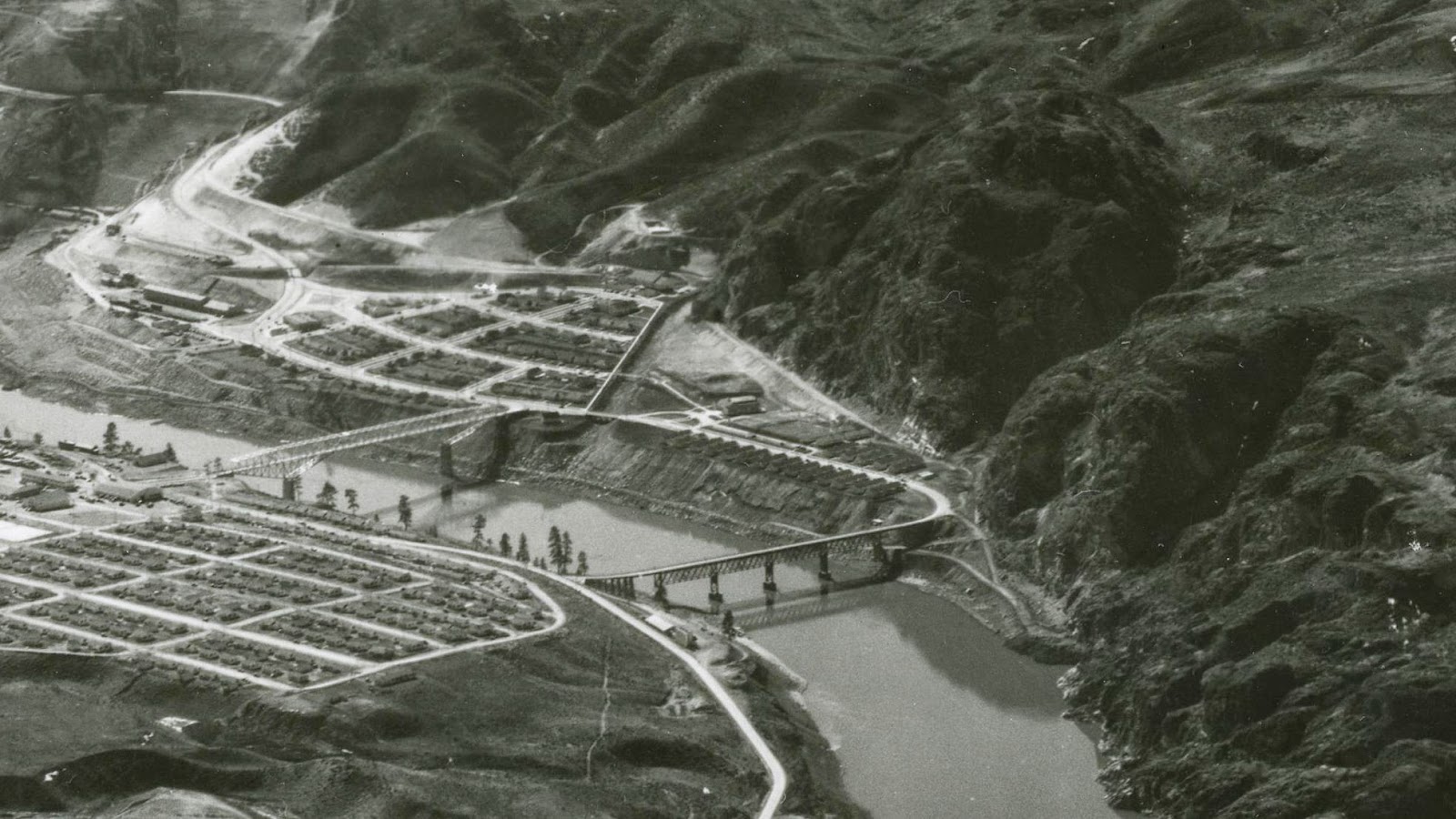 08 After the plans to build a railroad to the bridge were scrapped, parts of the grade were reused. 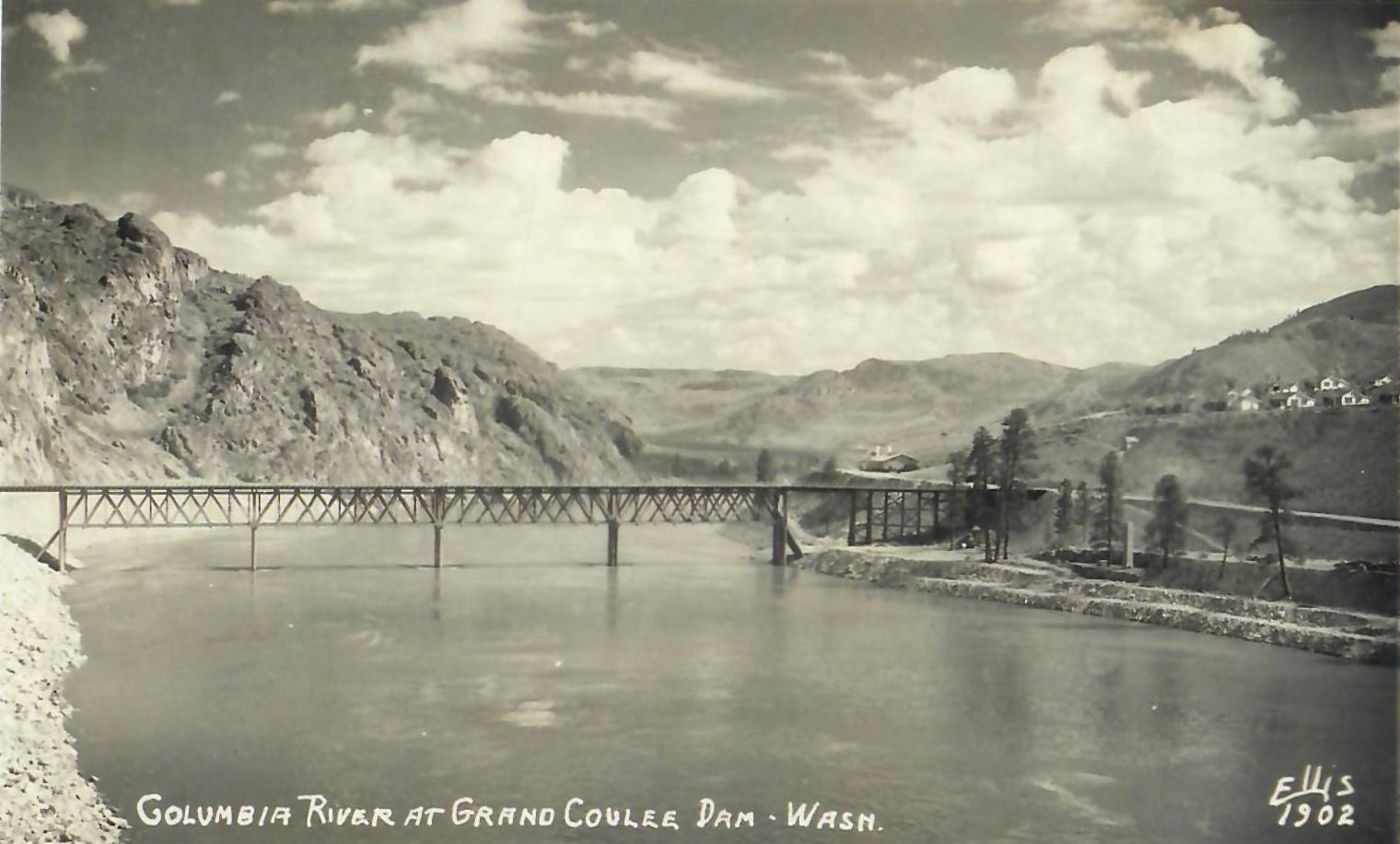 08-1 After the plans to build a railroad to the bridge were scrapped, parts of the grade were reused. 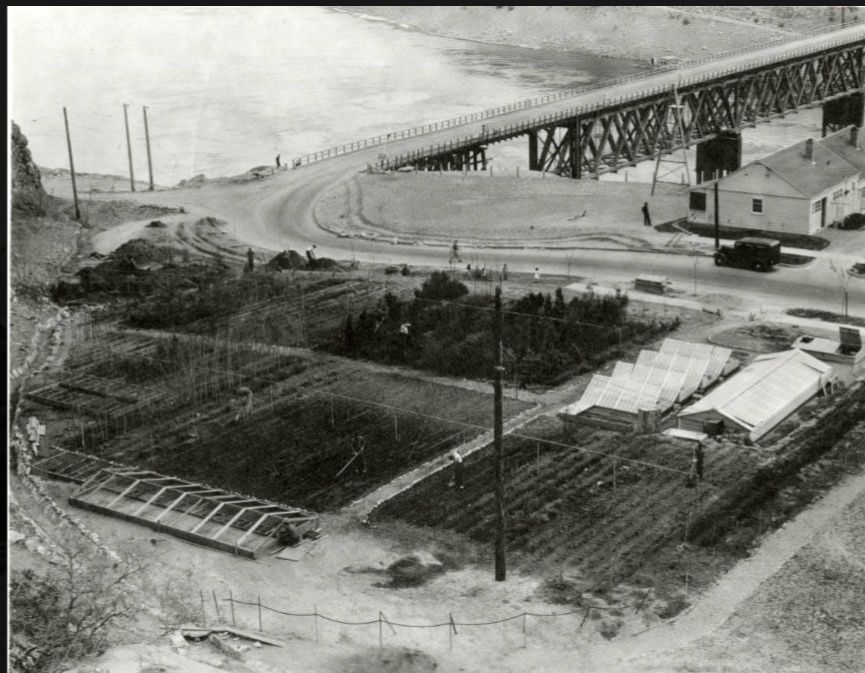 09 Another view showing the tunnel near the left side of the image along the cliff, and the grade down to the bridge.

10 Penstock load crossing the bridge. In the upper left of the photo, you can see the tunnel. 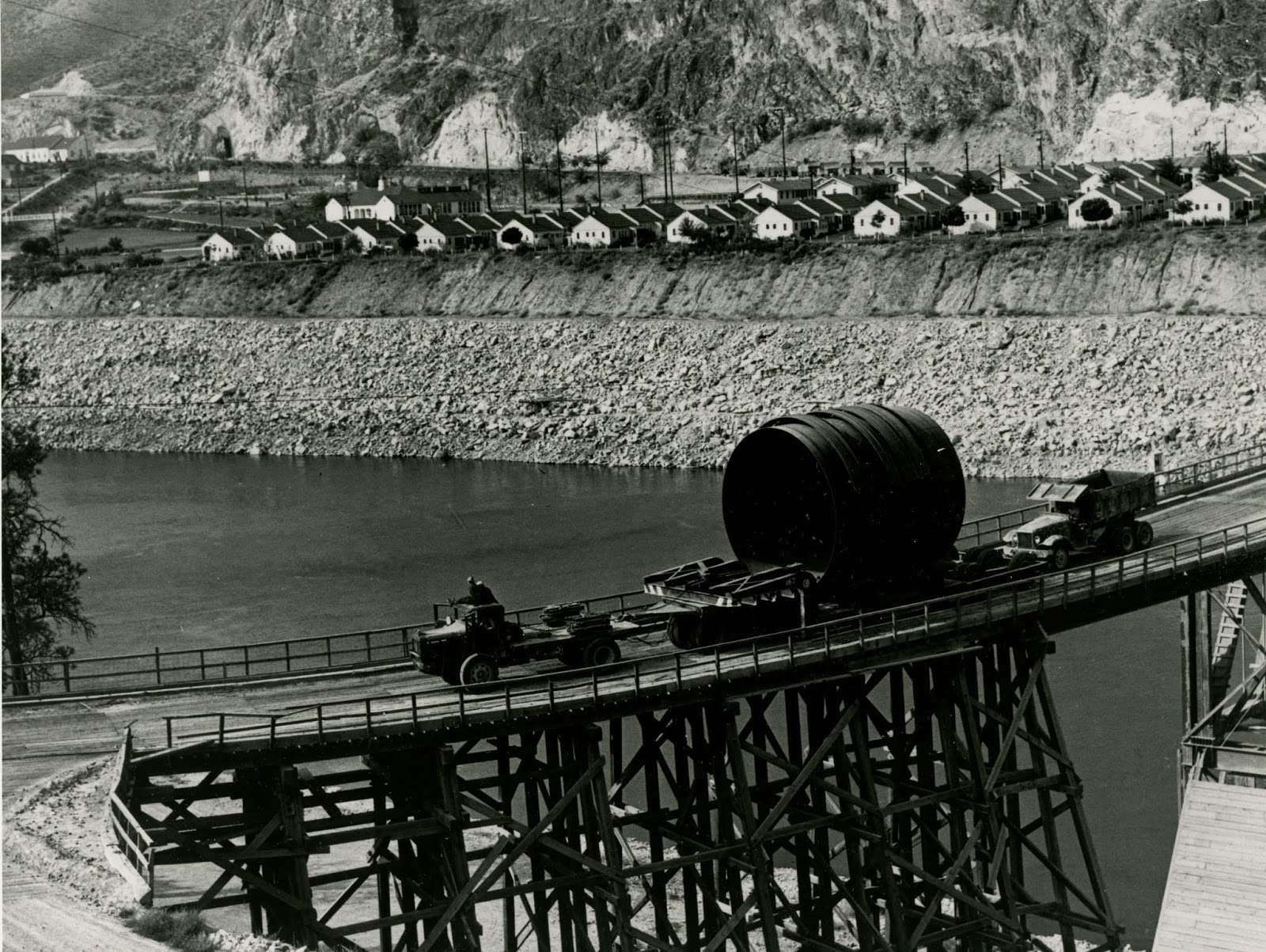 11 This is how the contractor expected to use the bridge, by running tracks over it and shuttling large loads to the east side of the river, but it never came to be. 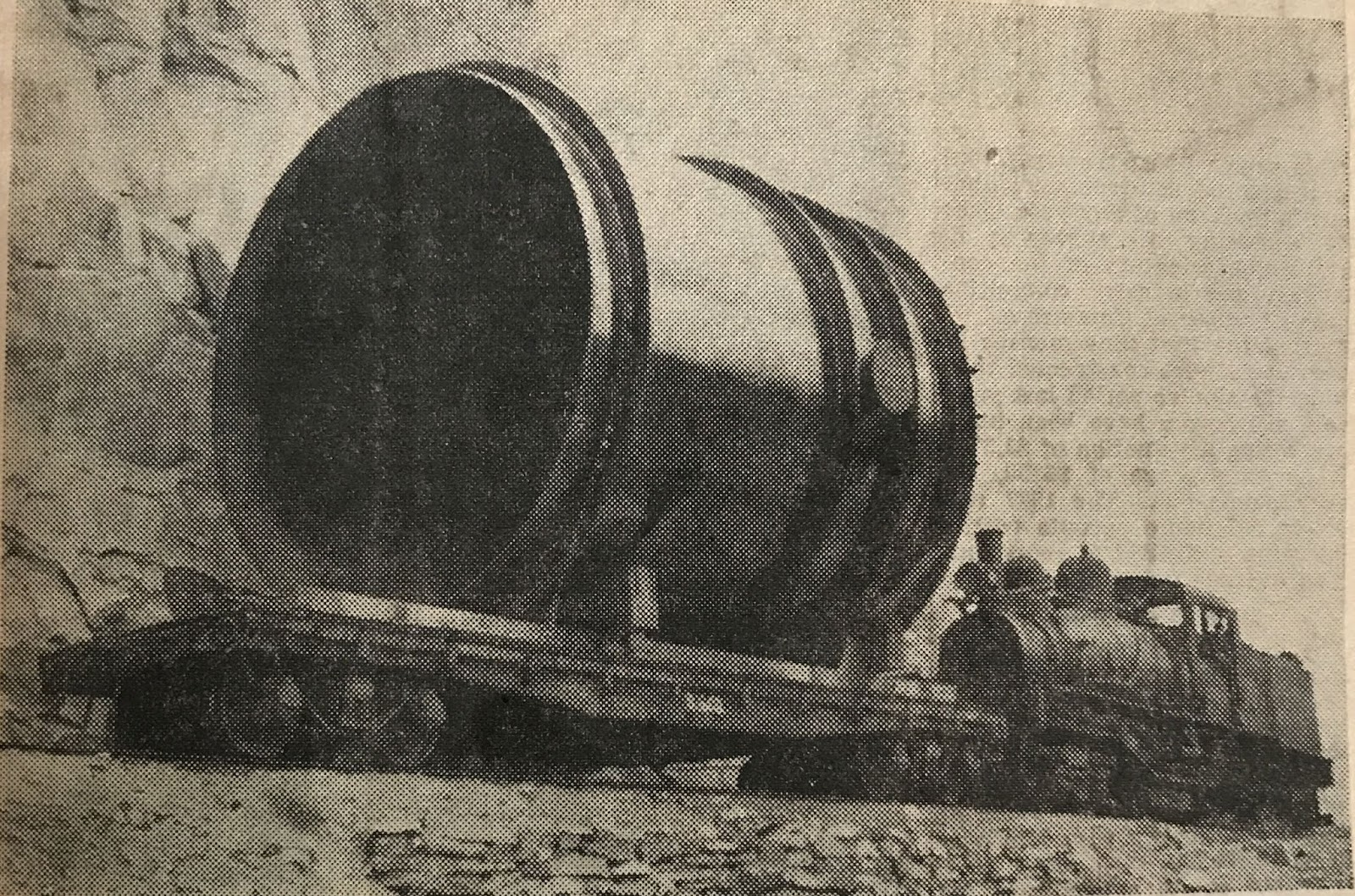 12 Disassembly of the bridge by Bureau forces. 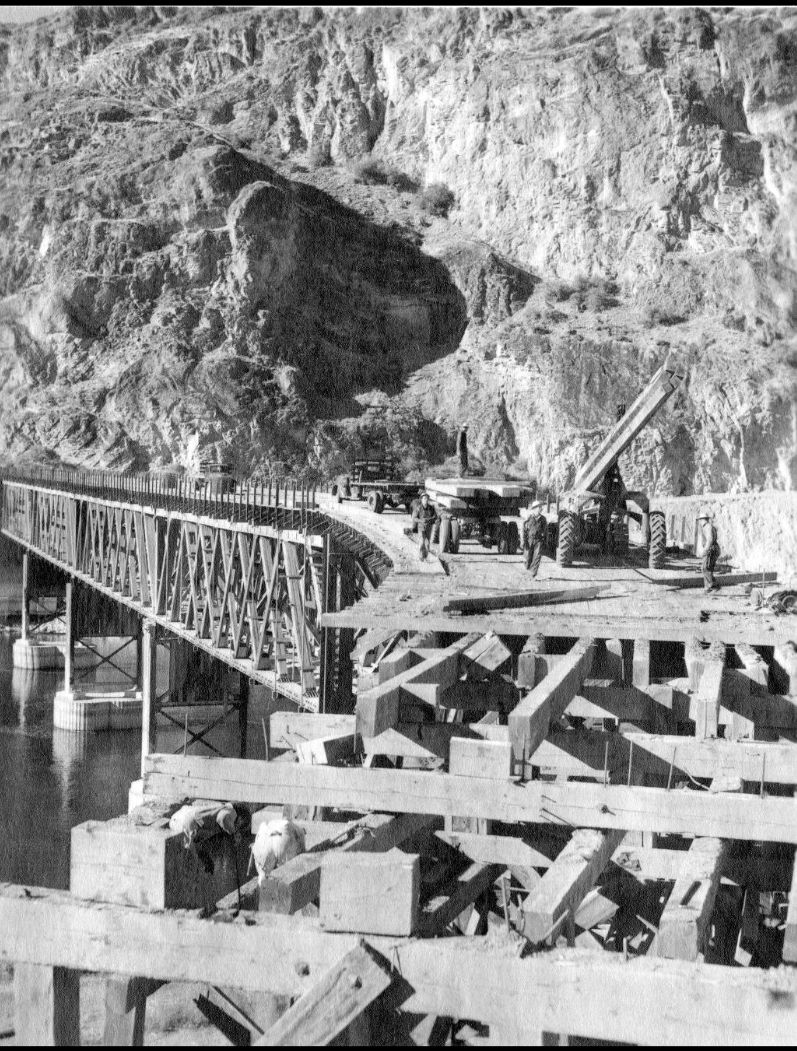 13 Portions of the bridge were dynamited and then salvaged. 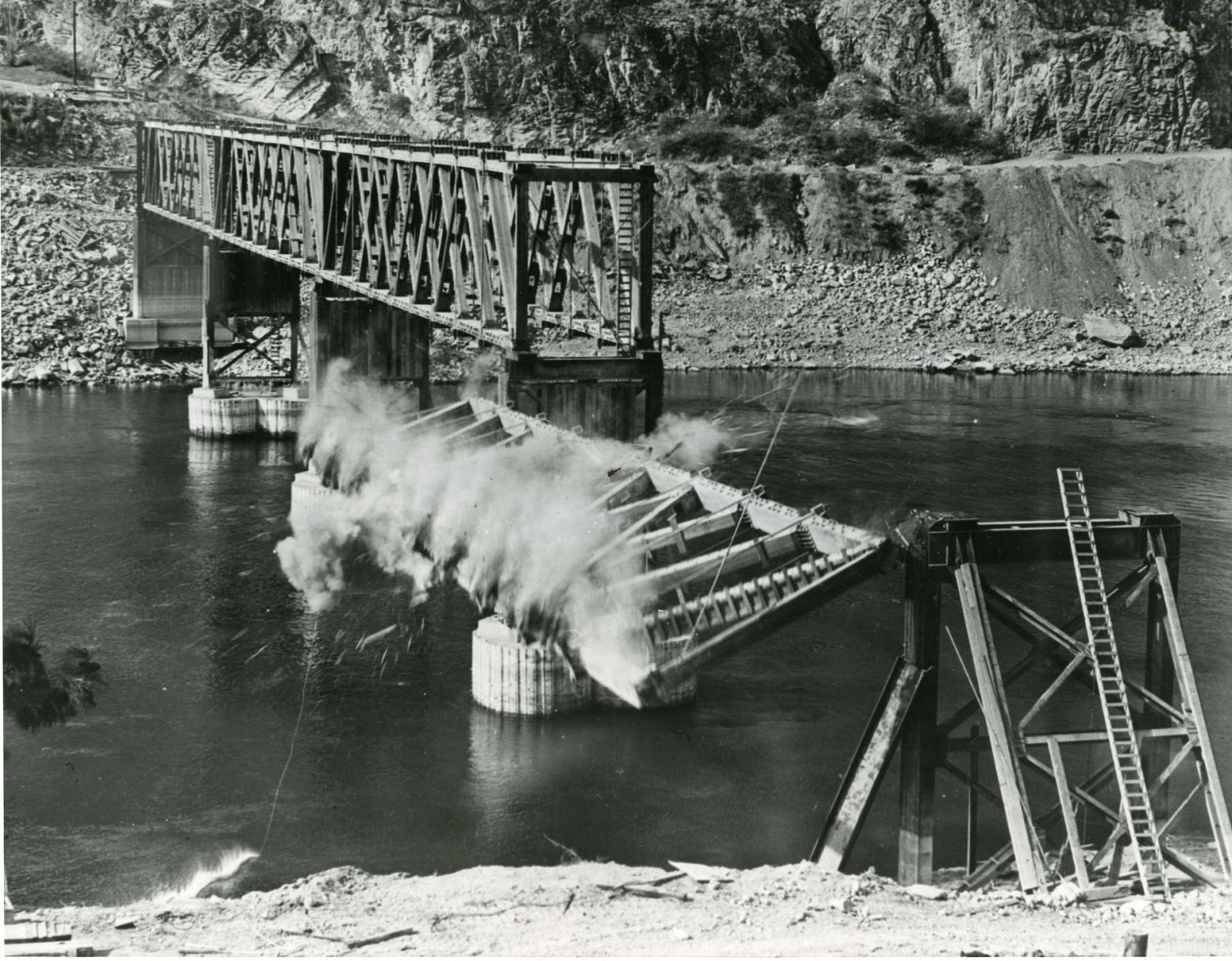 14 Portions of the bridge were dynamited and then salvaged. 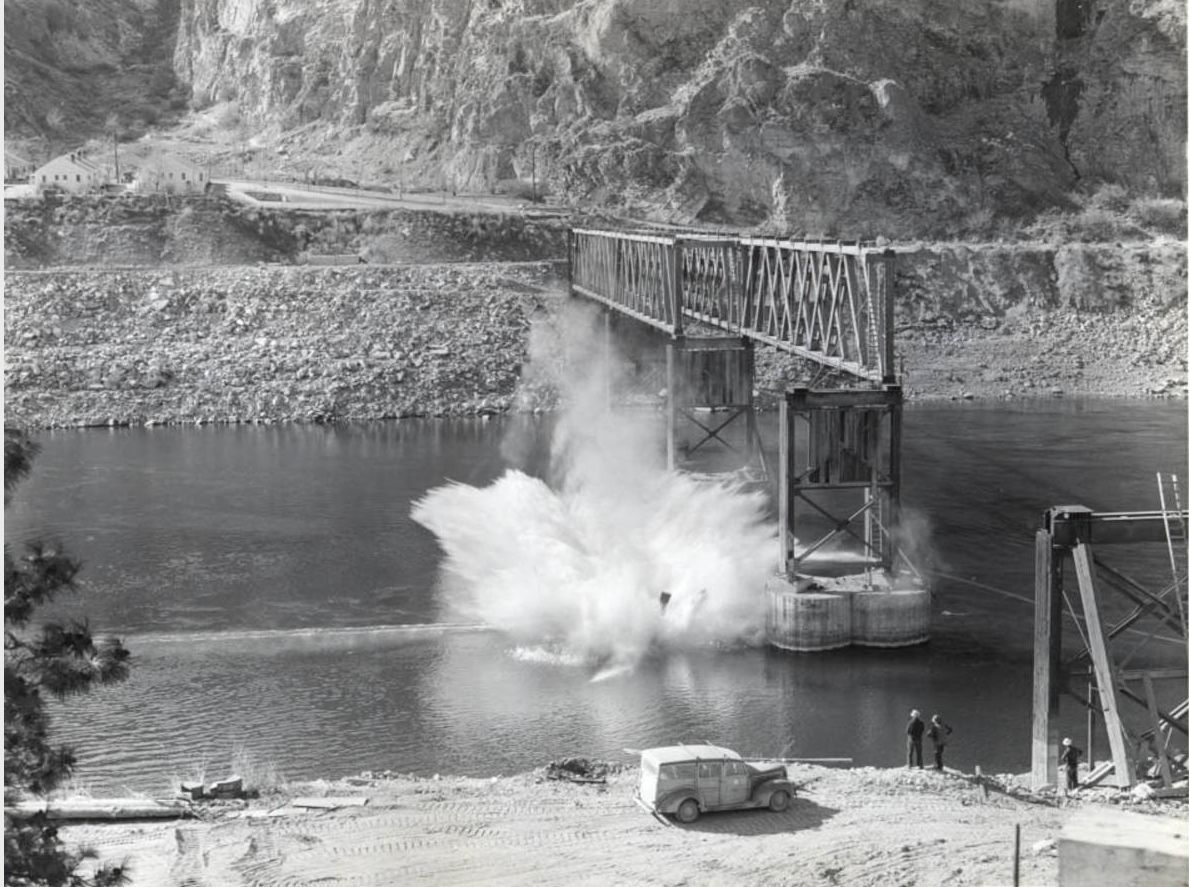 15 Nothing remains today, but you can infer where the bridge was by following the grade along the cliffs. Protection of the water edge by the Bureau after the 1948 flood erased the remaining approaches on either side of the river as the edges were regraded and then covered with large rock. 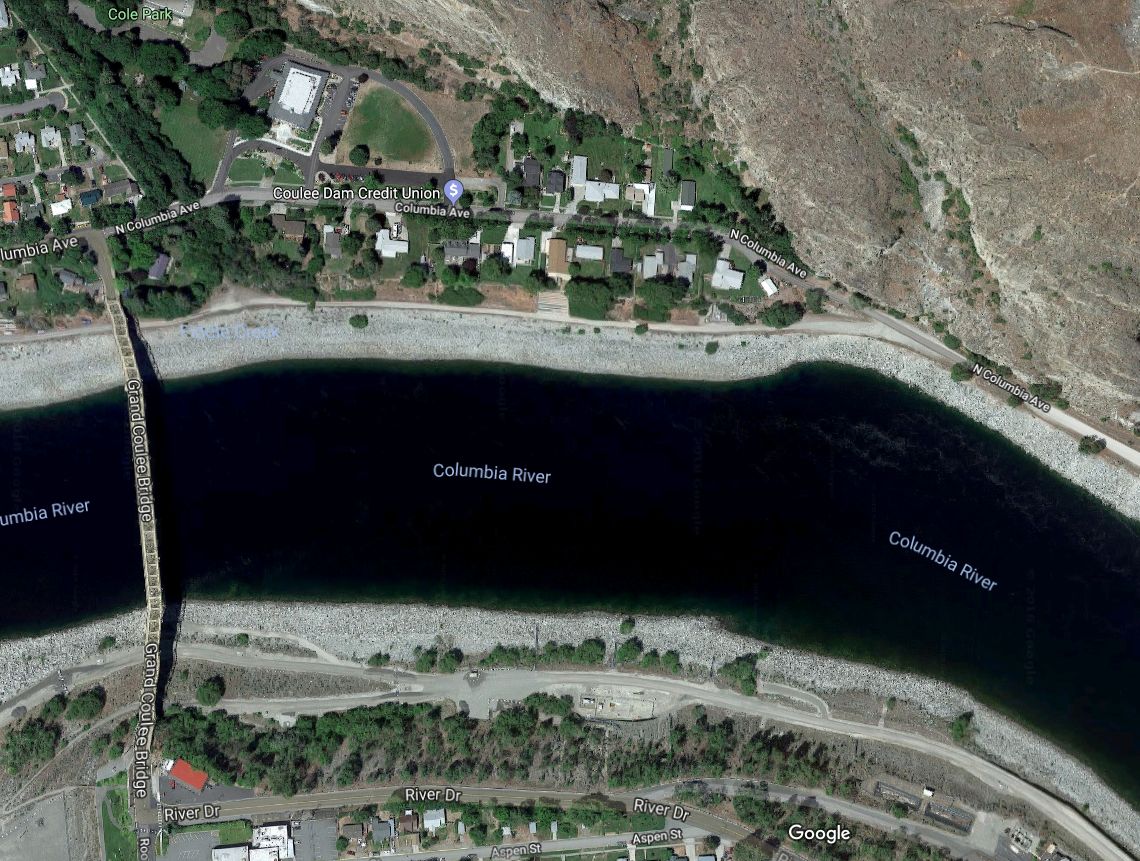