WRL On The Move!

"Very little of the Milwaukee Road's trancontinental mainline survives intact in Washington State--nearly all of it has been preserved as a trail from near the Idaho line to the Seattle area.
Most intriguing to me was the segment from Othello to Royal City Junction and the branch to Royal City, a total of 26 miles, which was sold by the State of Washington to the Port of Royal Slope in 2015. The Port has moved to upgrade trackage, clear and repair slides and washouts, and contracted Paul Dideius' ColumbiaRail to operate the line. Still, train movements have been very sporadic.
What would be the chances I'd actually see train move on this most tenuous--and tenacious--survivor of the mainline?

"I called the Port's phone number last week listed on their website, and talked to Port Director Bonnie Valentine. She was fascinated by my story about photographing the branch in 1978--even then operations were only around once a week, often at dark, and seldom photographed. Milwaukee Road was only moving around 300 cars a year. . .only a fraction of what the railroad thought the branch would generate when it spent $1 millon in the early 1960s on a developing area of the Columbia basin.
Bonnie said there were in fact six empties released from the shipper awaiting a crew to take them away. When that would happen was anyone's guess. Bonnie said she'd call me if she got and update on when the train would move. That was on Thursday. Several days later, Bonnie said there was no news.
It seemed like one of those "bucket list" train movements I knew I didn't have much chance of photographing wasn't going to happen during my week in Eastern Washington.
Wednesday morning, Steven J. Brown and I got up early in Spokane and drove to Valley, to photograph BNSF's Chewelah Turn coming south. The plan was follow that train for a while and then head north to spend the rest of the day on the Pend Orelle Valley.

"I was set up for a shot of the Chewelah Turn at Jump off Joe Road above Springdale, on the climb to Loon Lake. With the train approaching, I got a phone call at 0820 from Bonnie: the outbound train crew would be at Royal City at 10am if you wanted to photograph the train. Would I??? But it didn't seem like it would be possible--from where we were, we'd have to travel 167 miles in 2'48" according to Google Maps. Surely, that train would be long gone by the time I got there. . .but then I thought: the crew would have to fire up the power, run the power around the train, inspect the cars. . .railroading being railroading I figured if I drove REALLY FAST, I had a 30% chance of seeing the train on the branch. I called Bonnie back and said I'd be there--but if the train, parked outside her office window, moved, please give me a call.

"I was impressed how fast my rental Grand Cherokee could move; I don't want to know how poor my mileage would be with lots of miles at over 90 per on the two-lane mostly-straight back roads down to the Interstate at Sprague. I pushed it a bit on I-90 as well. . . . getting stopped by a state trooper for being "a bit" over the limit. My pleasant attitude and cooperative demeanor got me a warning to keep my speed down.

"I did that 167 mile trip in 2'15", shaving a half hour off the Google estimated time. Alas, the train had departed Royal City. .. .but dropping down the coulee a mile south of town, there it was!! Stopping for some unknown reason. I was in business, and a bucket list item was ticked off.
Bonnie and a coworker, it turns out, were chasing the train as well, and I met port commissioner Skeeter Mianecki as well, out with his camera. Apparently, train movements are still rare enough out of Royal City that much of the Port staff took some time off to chase it for photos.
Of course, I chased it to Othello. It didn't move much slower than the mainline trains did in the final months of operation--around 90 minutes for the 20 miles from the Junction to Othello, where the SD45 #331 dropped its train and returned to Royal City.

"I shot the train in 8 locations, aided greatly by drone technology--those locations as a 20 year old I could run 900 feet across a field and climb 200' up ahill side to get the shot was done with a flying camera. Even so, I was able to shoot this train at several places I'd photographed Milwaukee Road trains at 40 years ago.

"I was pinching myself hours later at what I'd seen. I never expected to see that again!
"Here are a couple drone images from today's chase." 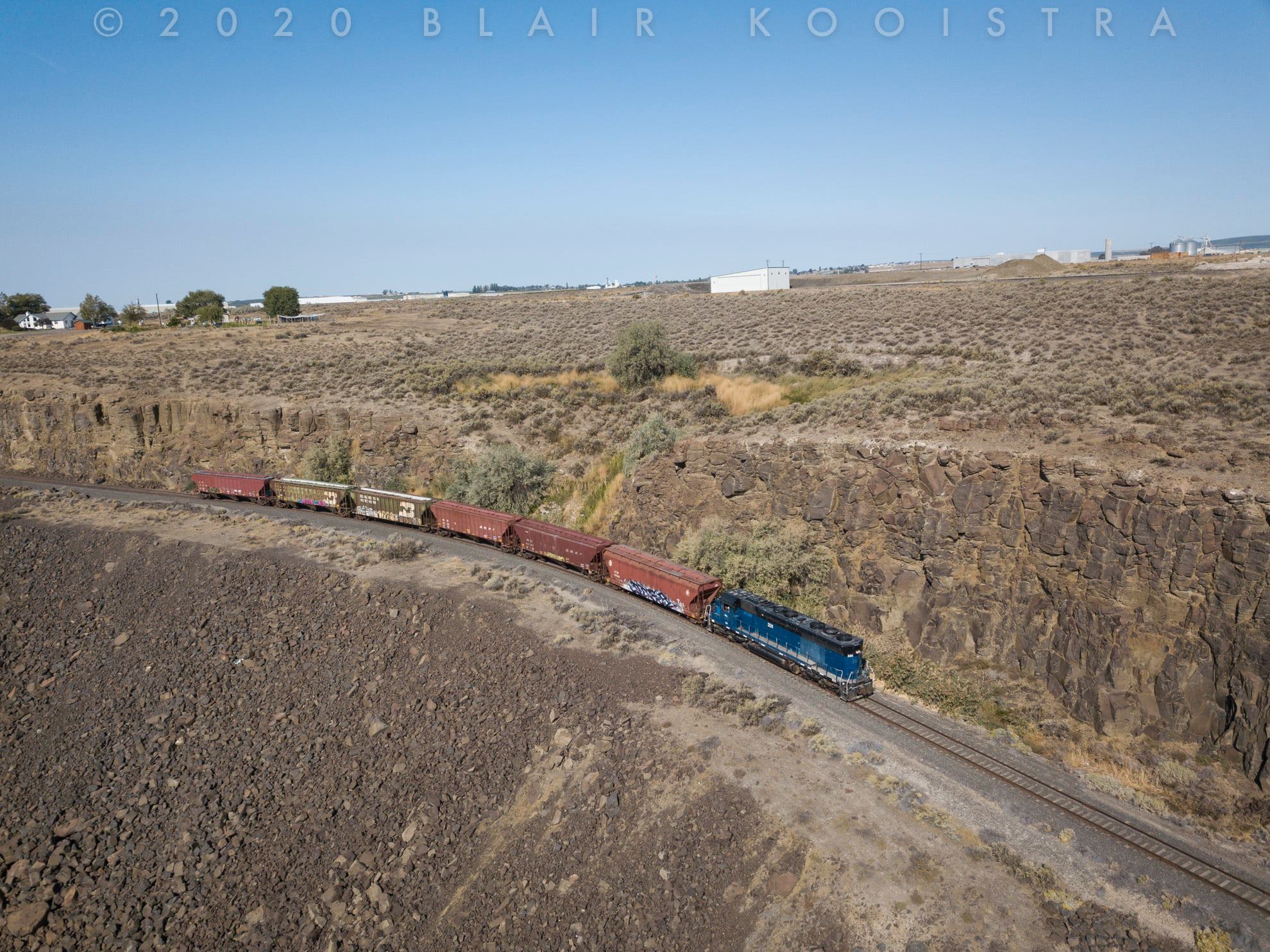 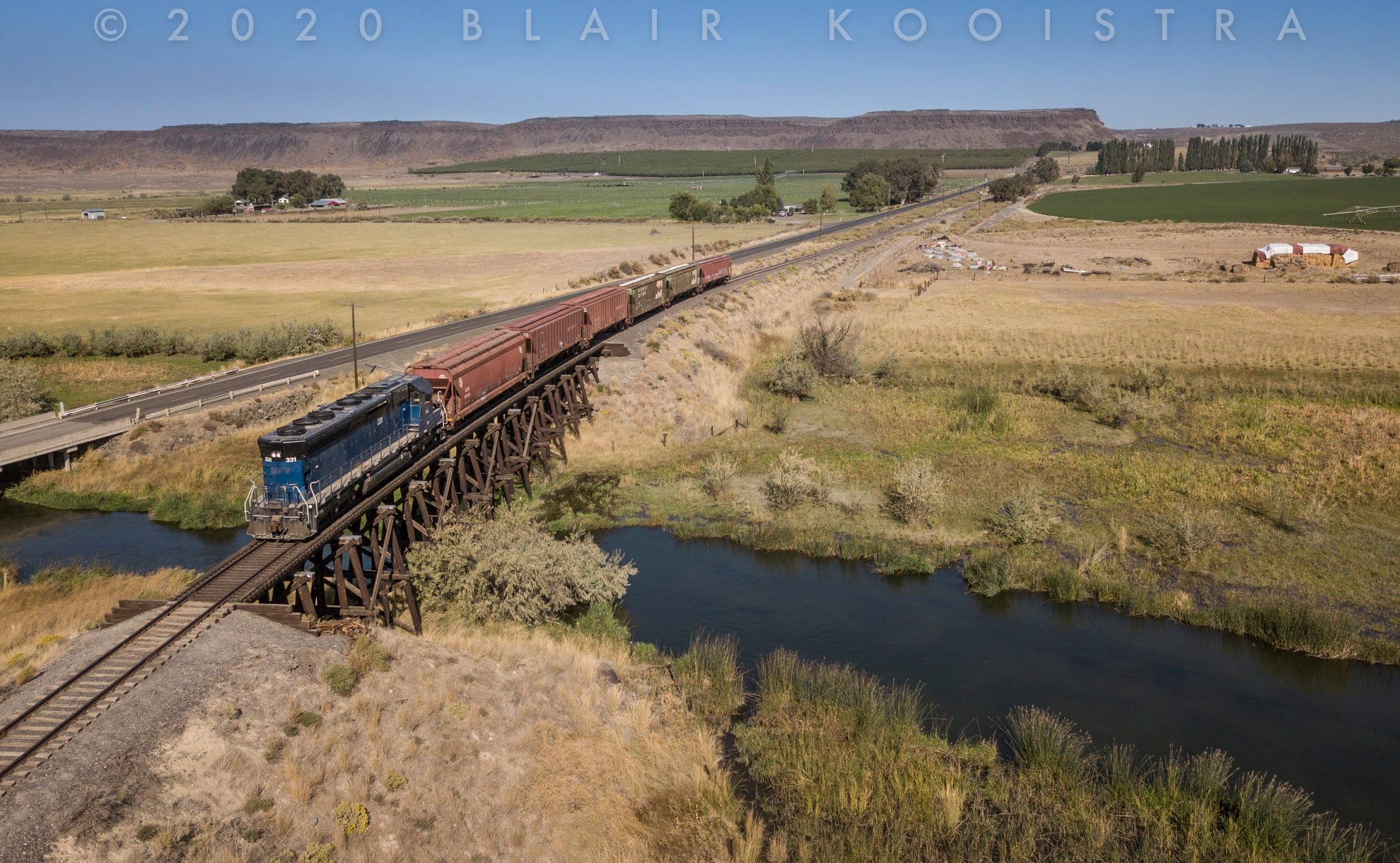 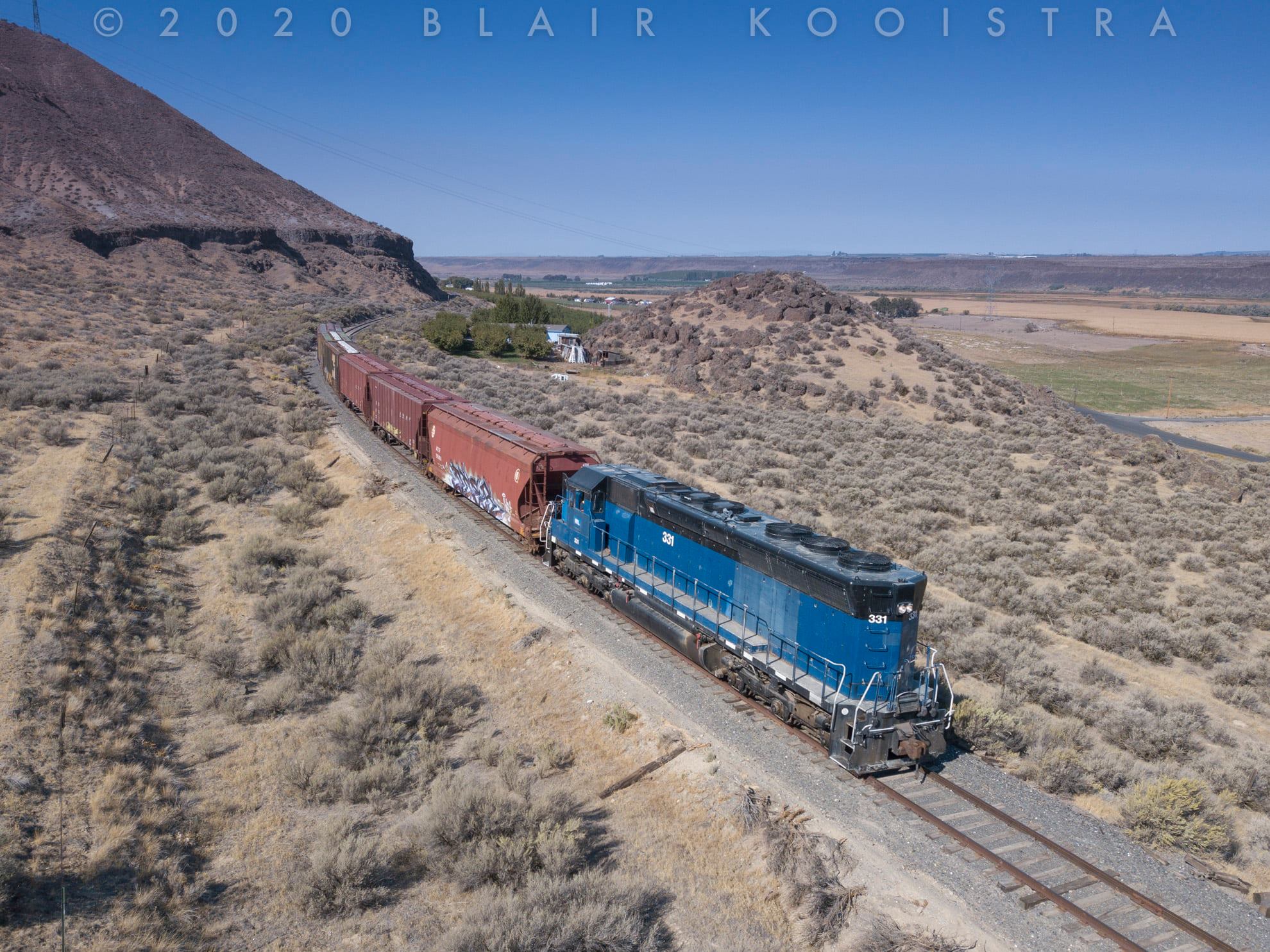 For reference, a vintage view.