There seemed to be some interest generated in the Hanford Branch from my story about working in Beverly. The branch was constructed for 46 miles south, down the west bank of the Columbia River in 1912-13, the branch opening for service officially on May 16, 1913, but businessmen in Ellensburg were given a special sneak preview of the branch when a special train, known as the "Trade Extension" excursion was operated out of Ellensburg on Tuesday, May 6, 1913. In the hopes of selling business lots in the towns of White Bluffs and Hanford, and developing a growing fruit industry in the newly-irrigated Priest Rapids Valley this special train consisted of locomotive # 7500 a class C4 Consolidation (2-8-0) that was formerly Montana Railroad # 101, built by Baldwin Locomotive Works in October, 1904. Also a baggage car, day coach, sleepers "Ellensburg" and "Spokane" and business car # 5004, assigned to Columbia Division Superintendent Mott Sawyer. The train ran to Othello, where lunch was served in the Interstate beanery in the depot. The train then doubled back to Beverly and ran down what was then called the Priest Rapids Line to White Bluffs where the train spent the night. It continued to Hanford on the morning of the 7th and returned to Ellensburg about 6 o'clock that evening.

The Milwaukee Road then offered special excursion rates to White Bluffs and Hanford to the general public for the first week of the lines opening, with return limit on the following week. The line never warranted more than mixed service when it came to passengers, meaning that a passenger car was carried on the rear of the local freight to accommodate passenger service. The train was nicknamed the "Beverly Sage Hen" by the local railroaders, but was also given the moniker "Sagebrush Annie" by the residents of Priest Rapids Valley. Every fall the sleepy branch would come alive with a supplement added to the current employee timetable and increased train size as carloads of fresh fruit were brought up the branch to be expedited on main line trains for eastern destinations. Peaches the size of grapefruits were described, other products included apples, cherries, pears, watermelons, cantaloupe and grapes.

The nation entering into World War II in 1941 would bring big changes to the modest little branch. On March 6th, 1943 the railroad and residents of the Priest Rapids Valley were served notice that they had one month to evacuate the premises because the U.S. Government was taking over the area for a military reservation. The government purchased and took over 25 miles of the southern end of the branch, establishing a sizeable interchange yard at the station of Riverland, which was designated Hanford Yard. Practically overnight the traffic grew on the line. Beverly yard was expanded in size from 2 to 5 tracks and an addition was built onto the east end of the Beverly depot to accommodate the dozen or more clerks brought in to process the billing and associated paperwork. It was not uncommon to have trains of 100 cars going down the branch with every commodity imaginable as building materials were needed to house the hundreds of workers hired to build the facility. Shipments of ice were brought in ordinary boxcars with water running out of them. One wondered how much ice was left when it got to it's destination.

The plutonium was made here for Trinity, that tested the first atomic bomb near Alamogordo. Also for the bombs dropped on Nagasaki and Hiroshima that brought an end to the war. Surprisingly, to keep from drawing attention to what was going on, the plutonium was transported in a small box container on an ordinary passenger train. No spectacular special runs like with the silk trains of an earlier era. The Hanford Project was one of the best kept secrets of World War II. Throughout the 1950's and 60's plutonium was produced during the Cold War. For these shipments of plutonium and spent uranium oxide the Hanford Local crews would get a midnight call about once a month, to run light engine to Hanford Yard and pick up a baggage car accompanied by two guards. This car was nicknamed the "Bomb Car" and was set out on the east end of the house track at Beverly for pick up by the passenger train. The Hanford Local during these years originated out of Othello, ran to Beverly and on to Hanford, then tied up at Beverly the rest of the week and returned to Othello on the weekend. The annex added to the Beverly depot in 1943 was converted to a bunkhouse for the Hanford Local crew during their extended layover.

By the time I worked at Beverly the Hanford Local was run "as needed" and mostly hauled transformers and other equipment to the Midway substation at Vernita, which was a regulating station for electricity produced from the Grand Coulee dam. Milwaukee's newest power did make a run or two on the Hanford Branch, I have a running order for MP15AC # 471.

Crowd from the Trade Extension excursion outside the Othello depot, May 6, 1913, soon to depart for a two-day tour of the new Priest Rapids Line. 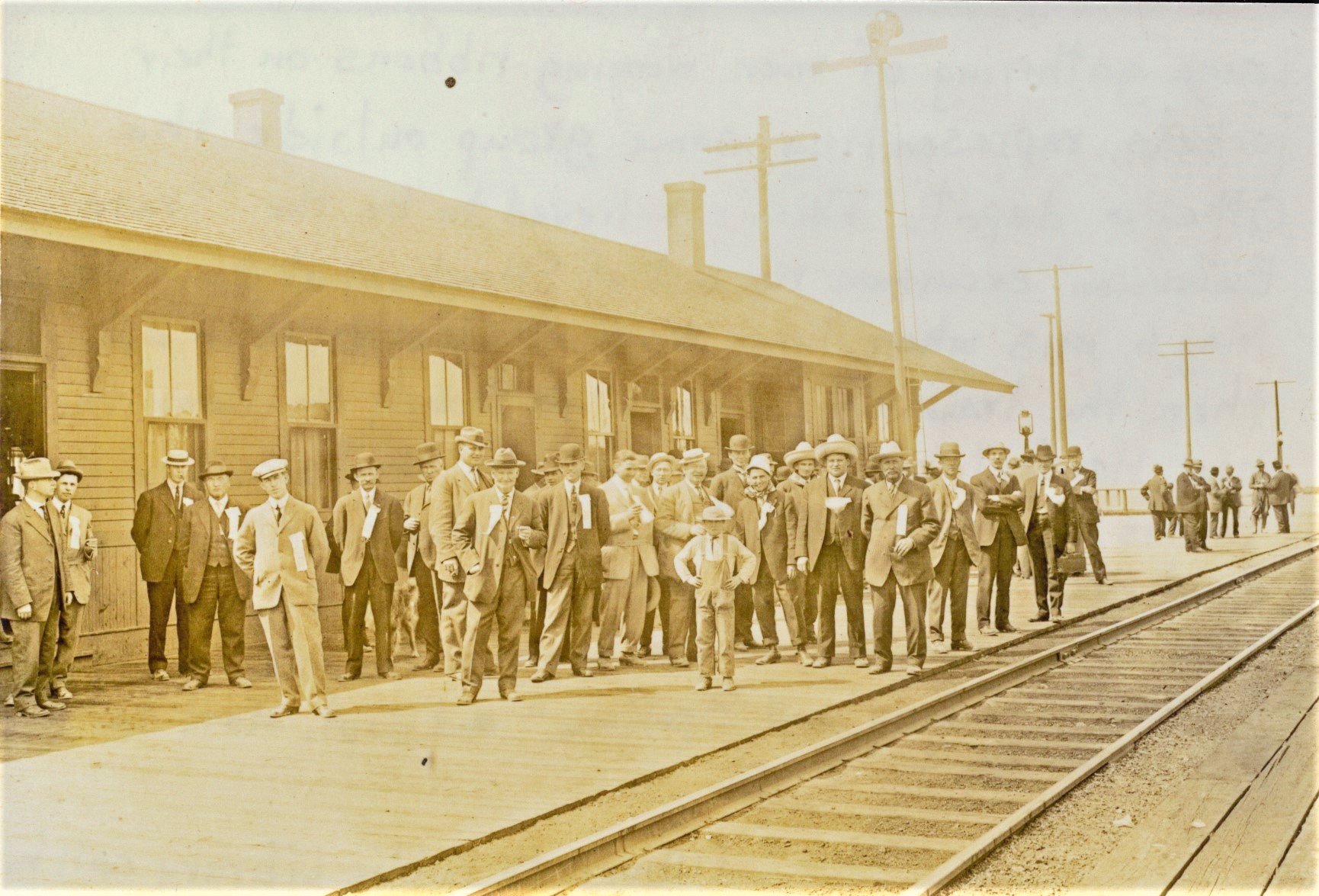 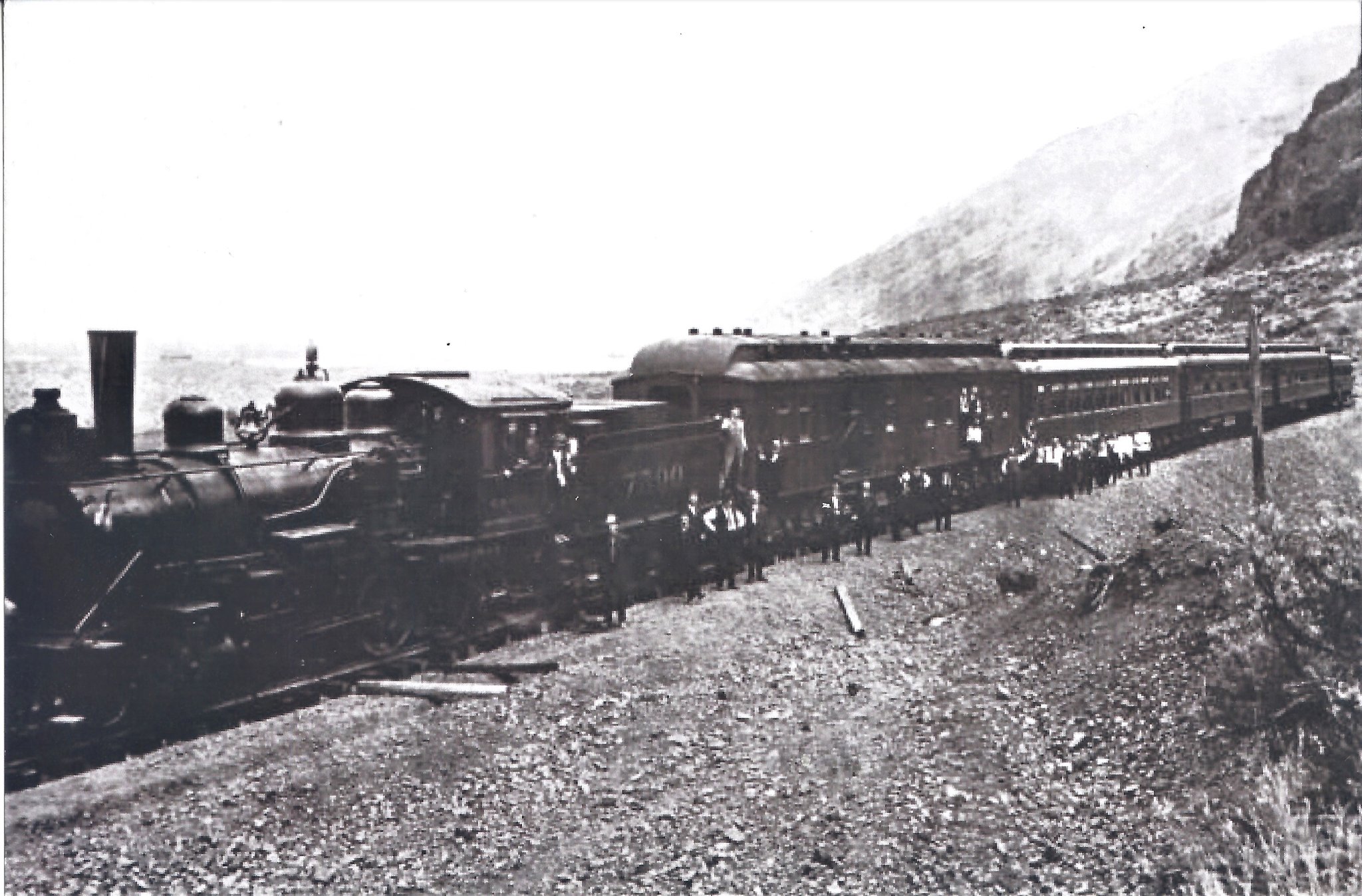 Excursionists pose with the train somewhere along the Hanford Line, May 6, 1913. 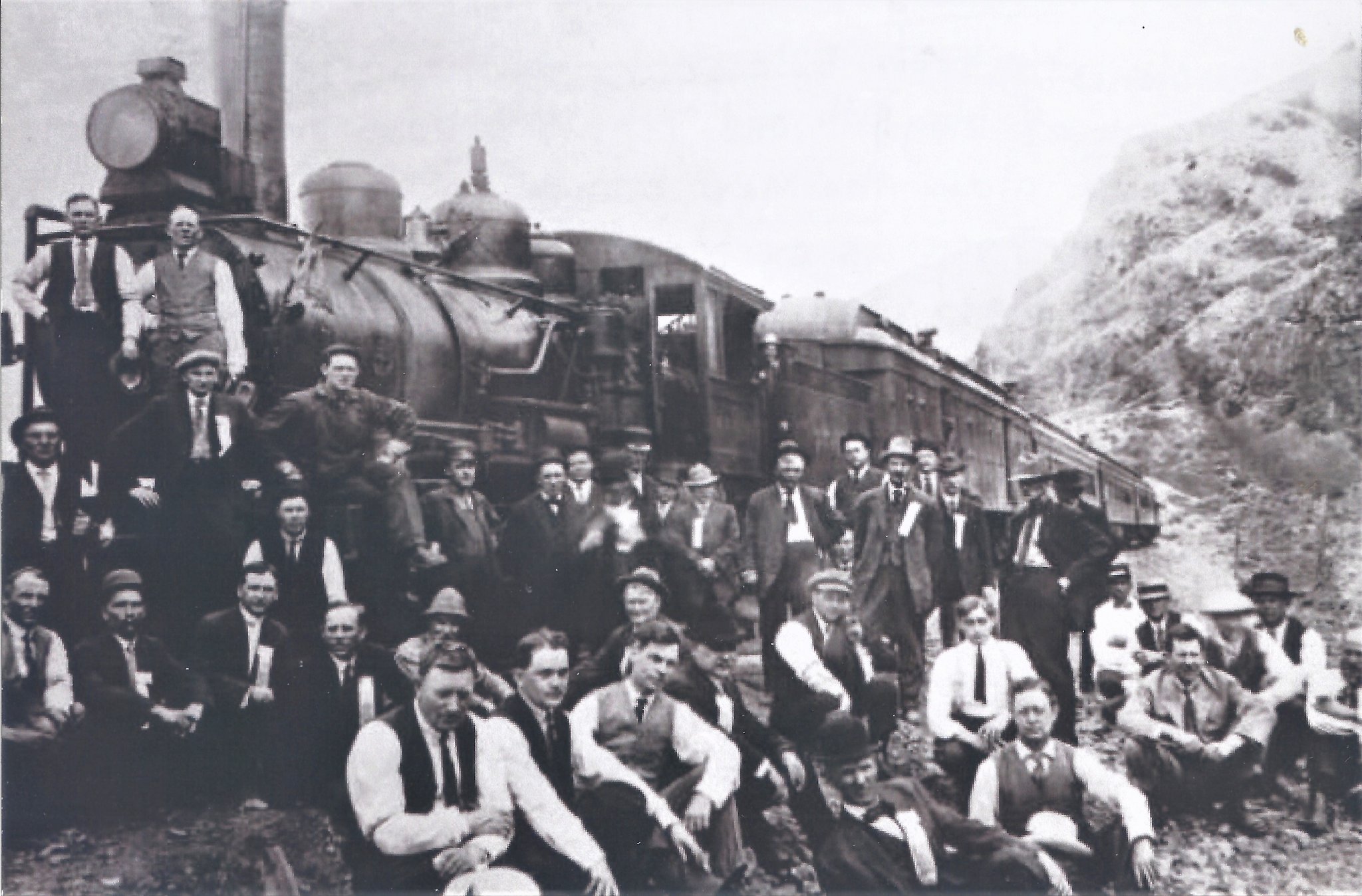 Advertisement from the Tacoma Times newspaper of May 17, 1913 offering special excursion fares along the newly-opened branch line to Hanford. 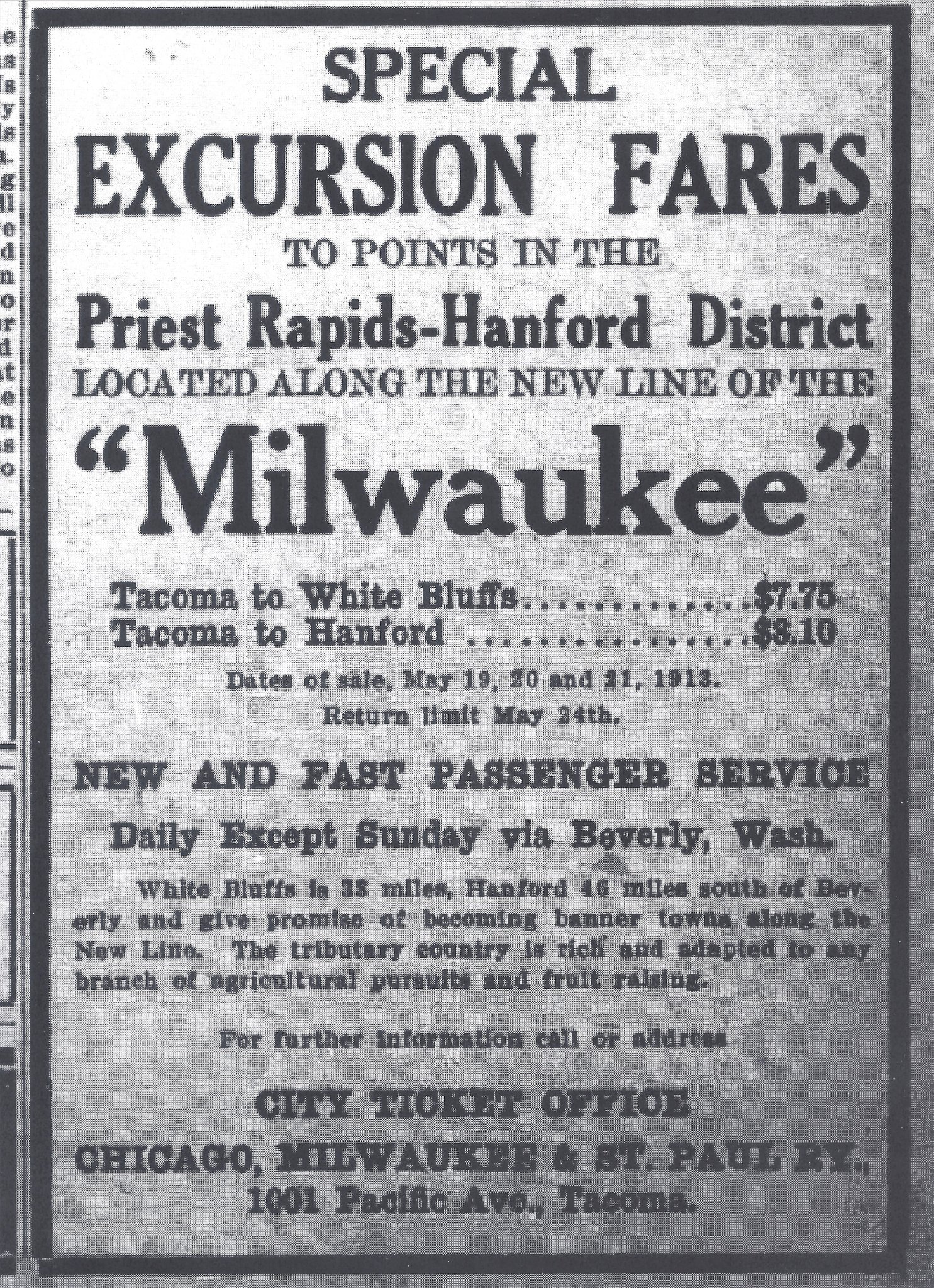 A 12'x32' class D portable building served as the agency at Priest Rapids. This office did not copy train orders, thus it did not have a train order signal, nor was it listed as an open office in the timetables. 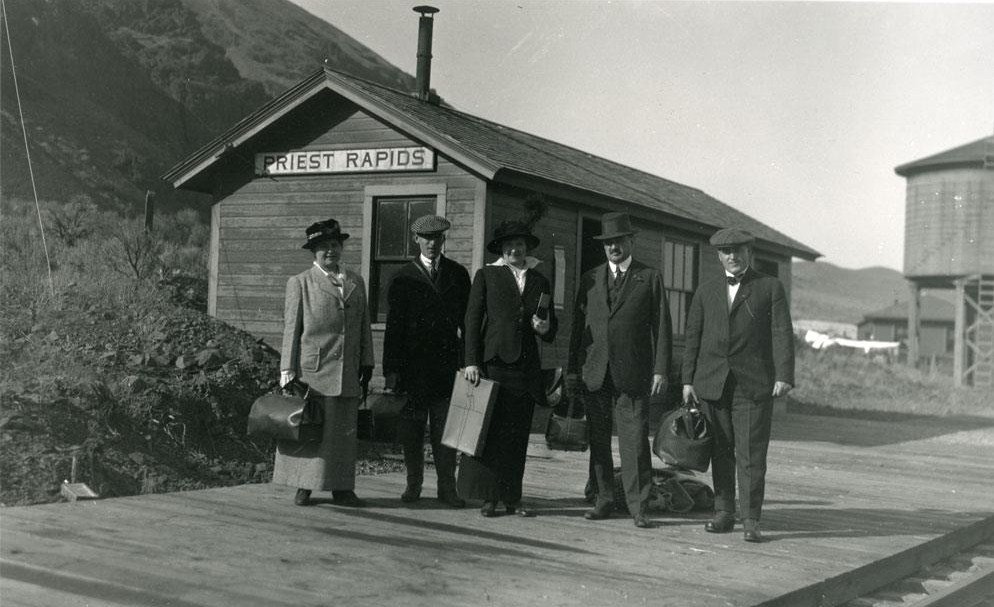 White Bluffs depot, May, 1939. Bill Smith was serving as agent here off of the extra board. Linda Smith Shook photo. 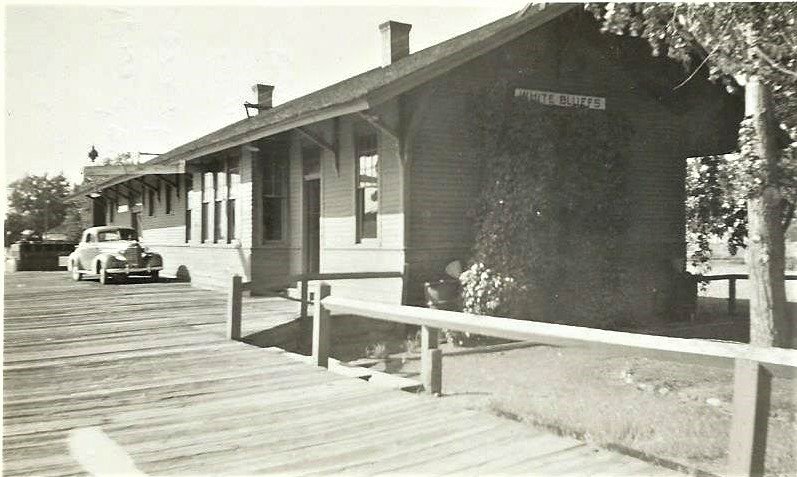 Hanford Depot 1913-14. Dick Rozelle was agent here at this time. Locomotive # 126, in the background, was an H3 class American (4-4-0) built by Grant in 1880 and was the second oldest locomotive on the Coast Division. 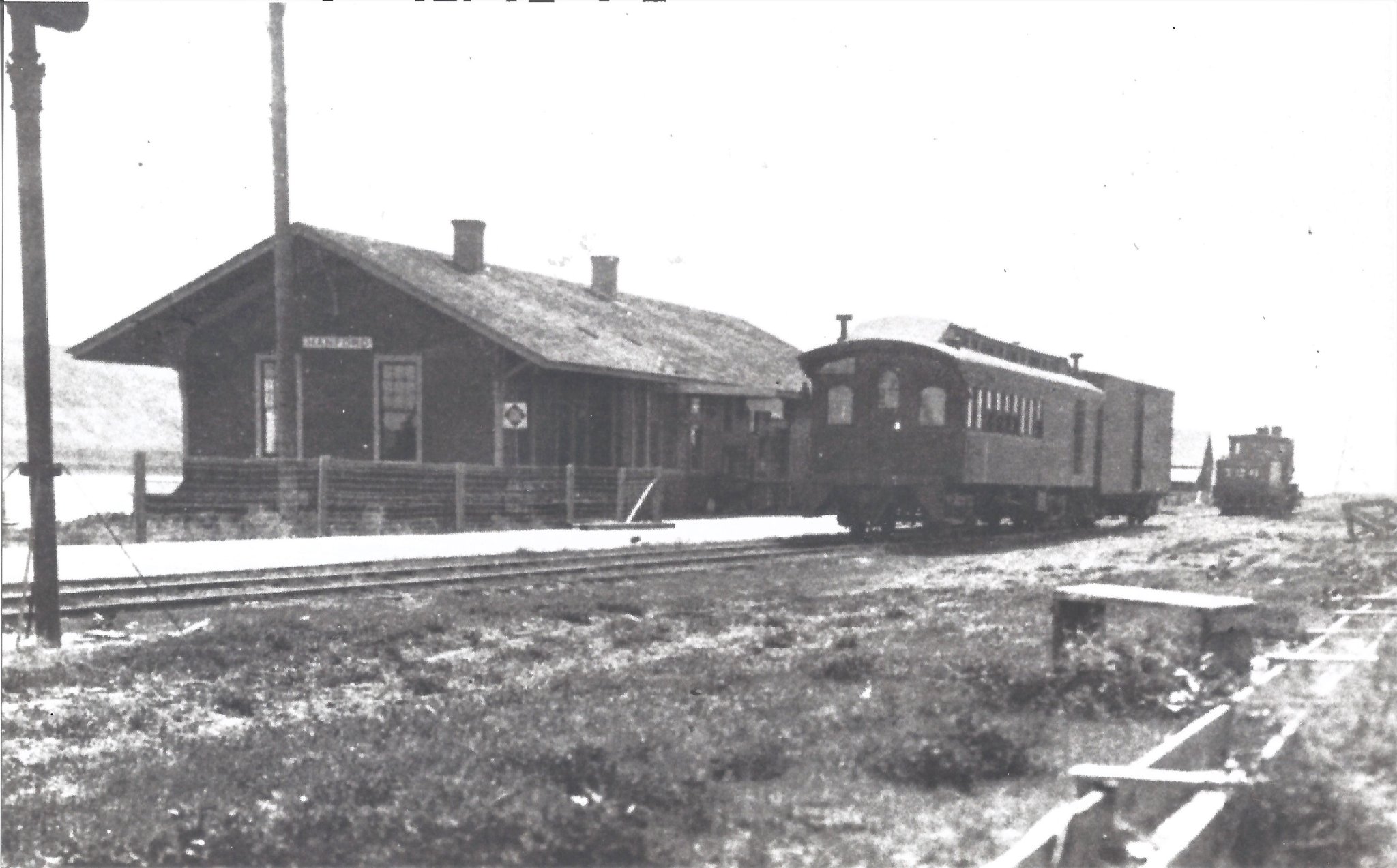 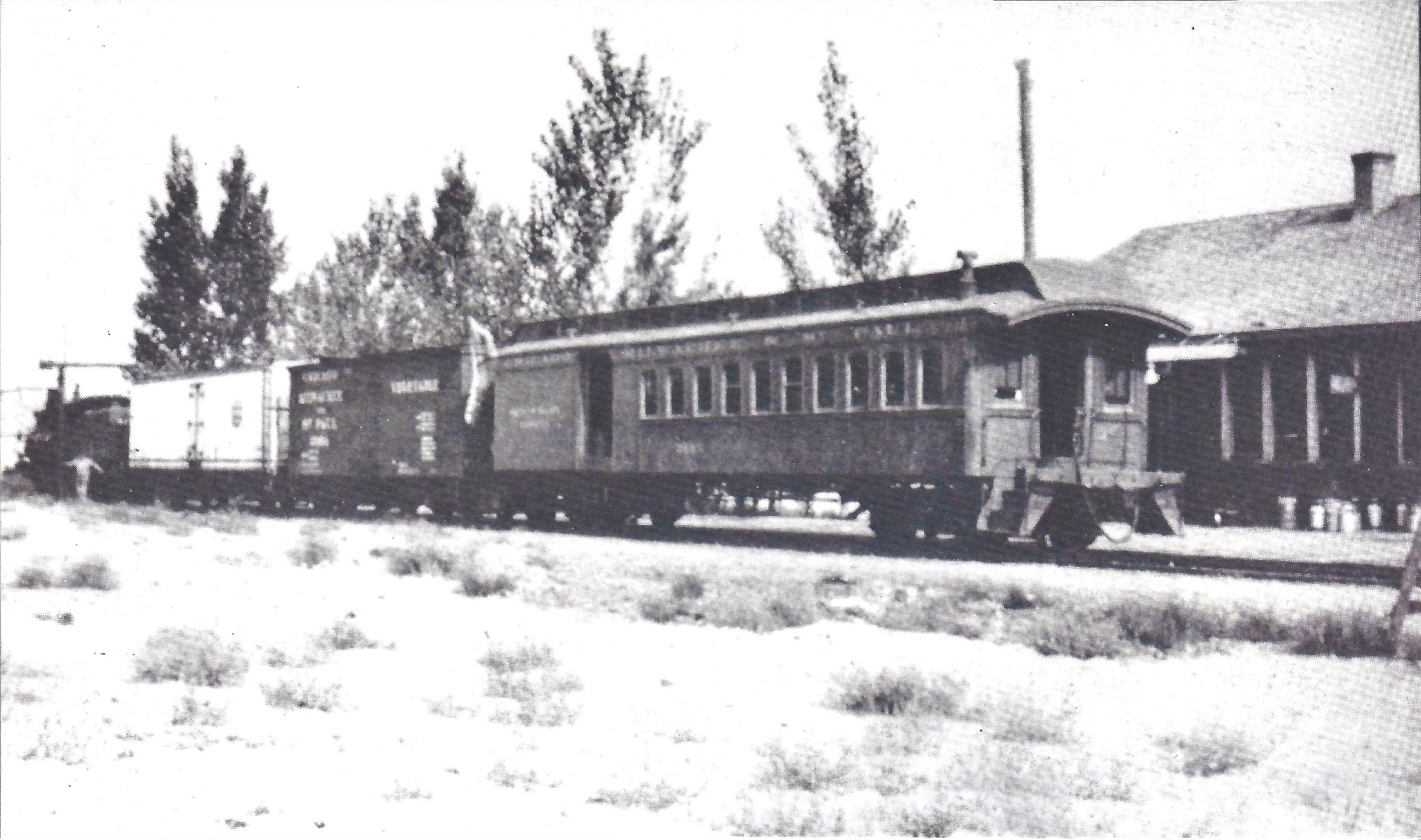 The Beverly Sage Hen, somewhere along the Columbia River. 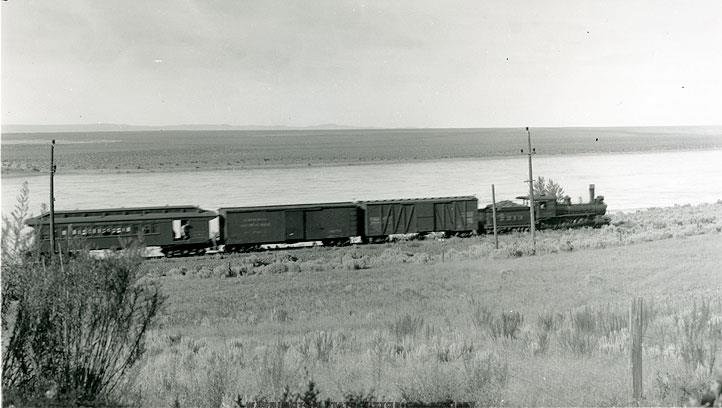 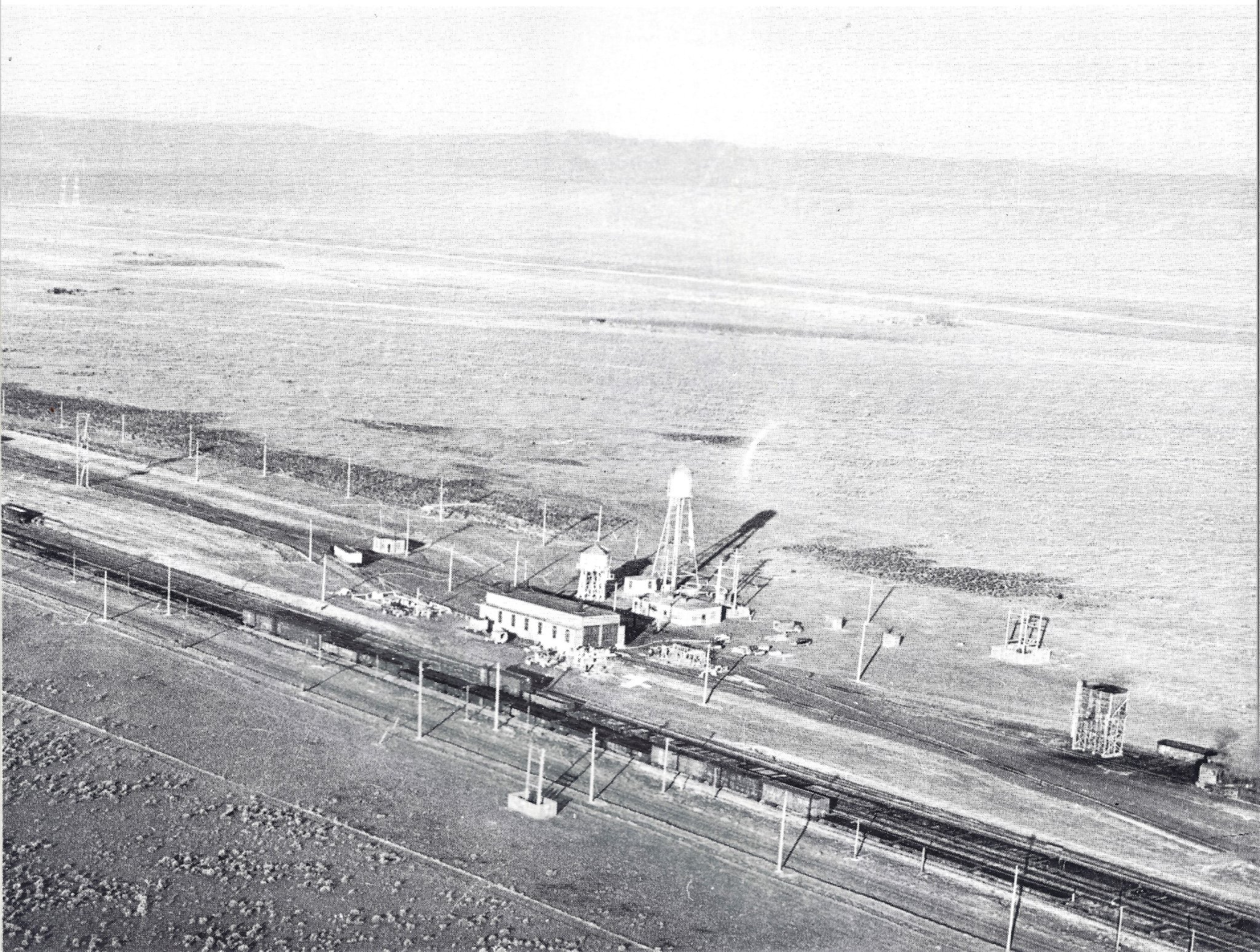 Another view of Hanford Yard. 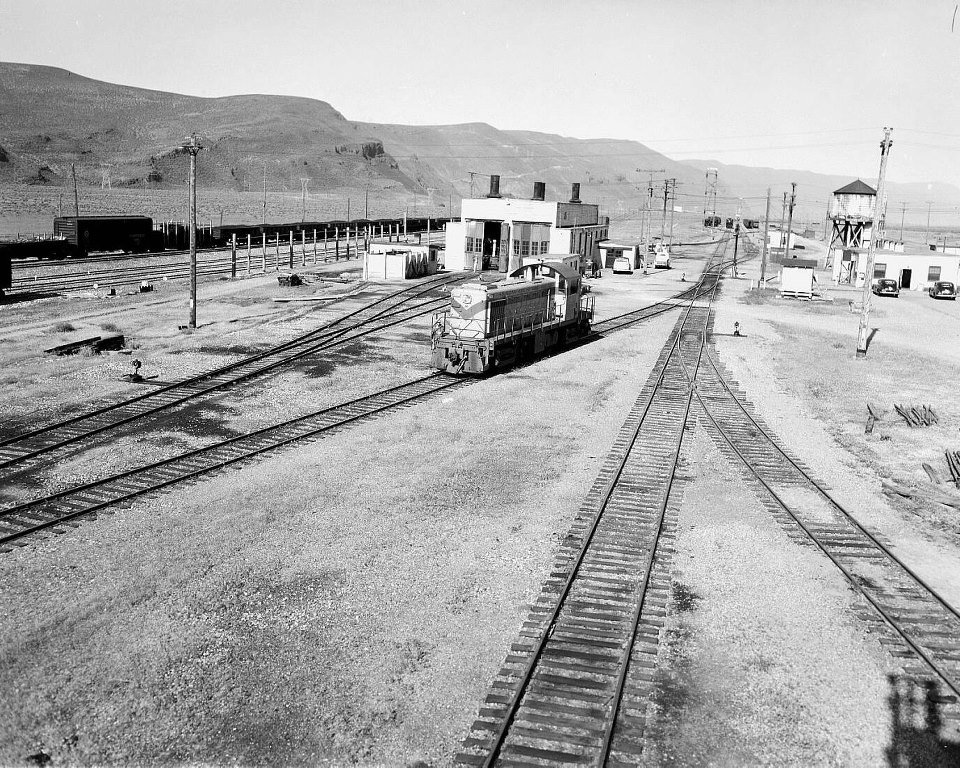 A page from a condensed profile book showing the new location of Hanford after the government takeover in 1943. 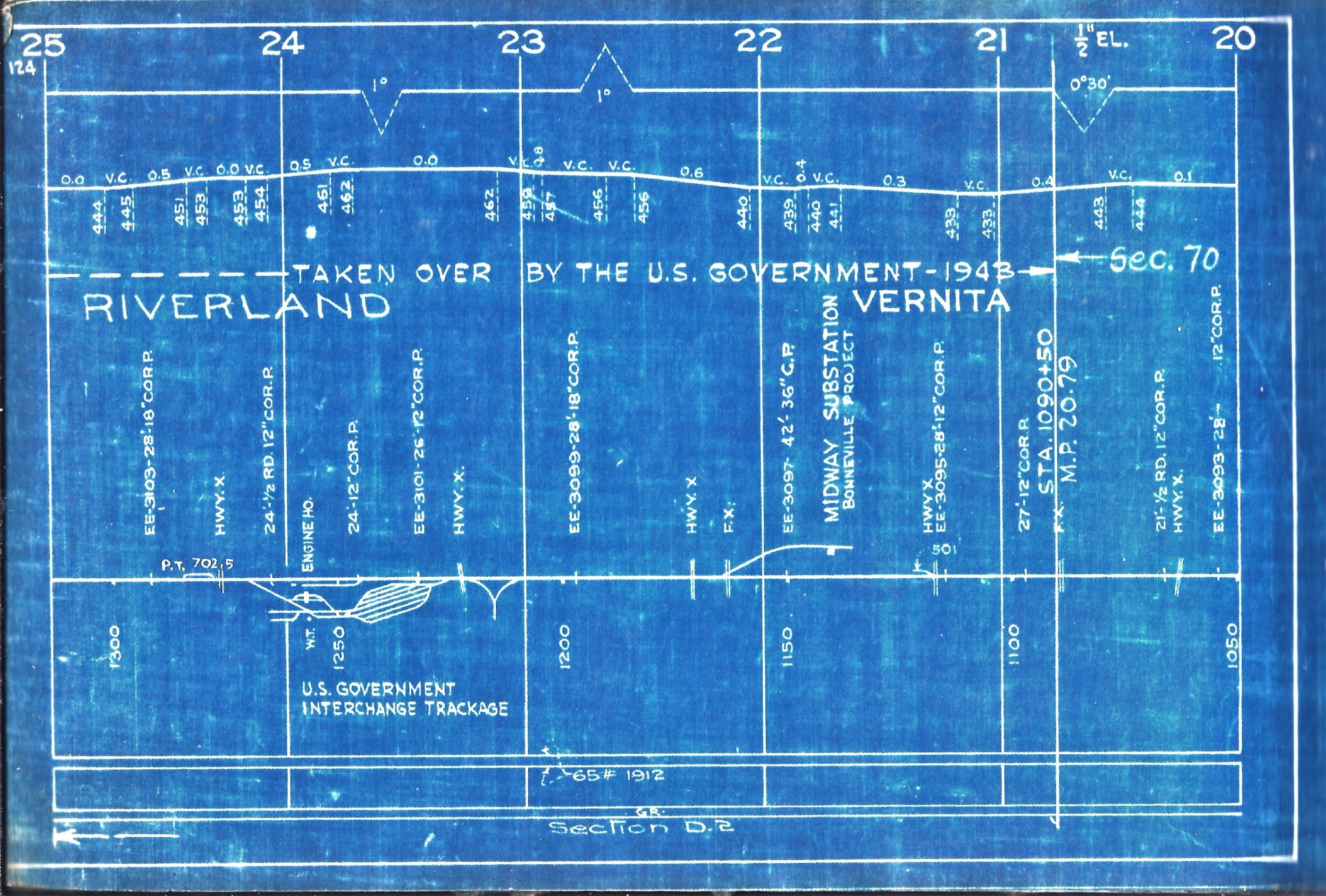 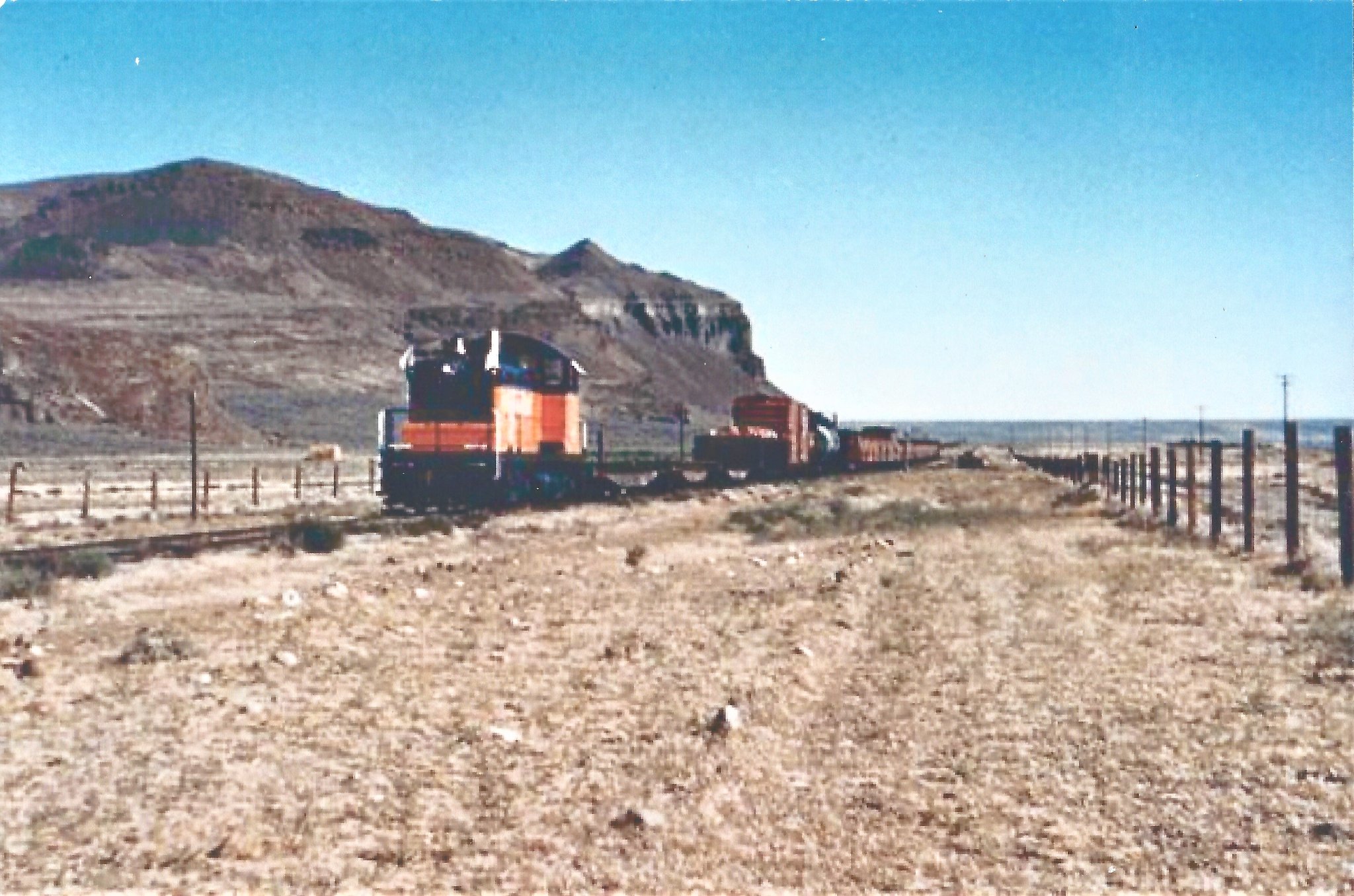 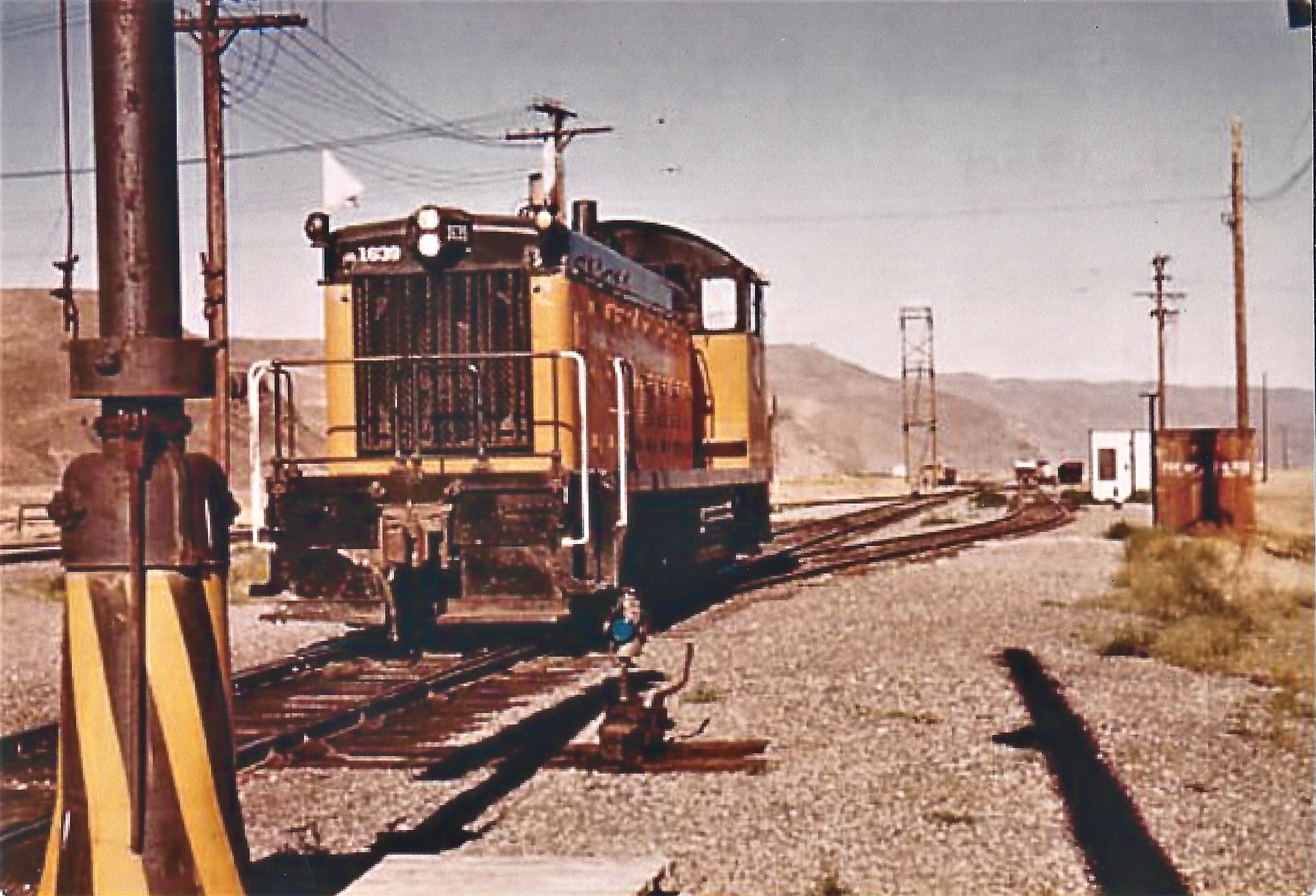 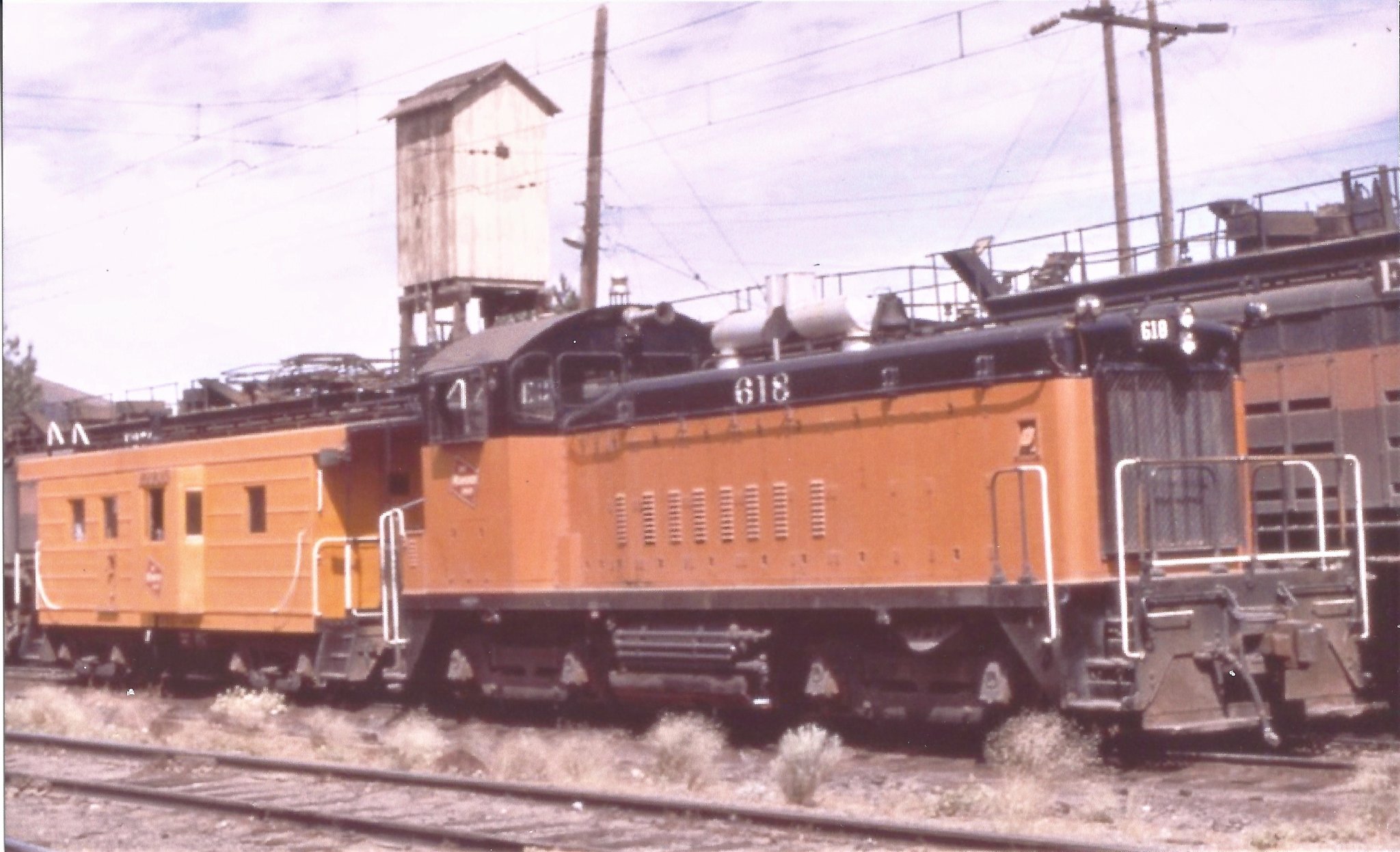