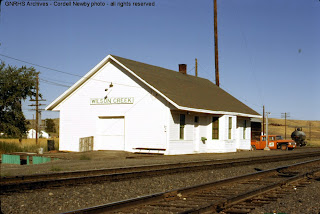 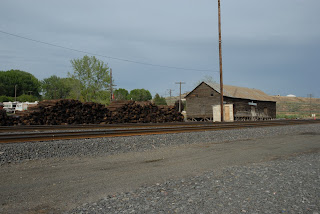 The Wilson Creek depot, back in the early Burlington Northern day, is seen much like it was when it was still a Great Northern depot. The depot was torn down in 1975.

Photo today taken in May 2010 shows where the depot was, plus a very old grain warehouse behind it, partially seen in the older photograph.

The derailment the BNSF had at Wilson Creek in March of 2010 had cars piled up against the wooden pole easily seen in the today picture, which snapped the top of the pole off. If the depot had been standing, it would have been destroyed in the wreck.

The pile of railroad ties seen in the today photo are from a recent tie replacement program, and is not directly related to the derailment.
Posted by SDP45 at 3:51 PM