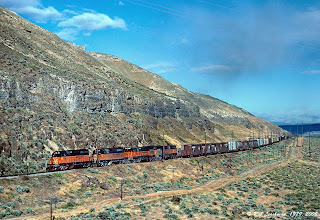 Rob says: "Locotrol train 200S27 climbs the gentle eastward grade passing the Smyrna Cliffs early in the morning on May 28, 1979. 200 this day has lots of power handling a big train. On the point are two SD40-2s and two U36Cs, the latter two providing lots of exhaust. Looking back down the train, we can see a gondola load of pipe (probably company material), three empty grain boxes for the Marcellus Branch, a couple of lumber loads, a CN fertilizer covered hopper, five more empty grain boxes, and then 15 loads of British Columbia lumber that came down to Seattle on the Foss barge. Behind that are a couple of auto racks off the SP bringing new vehicles to Montana dealers." 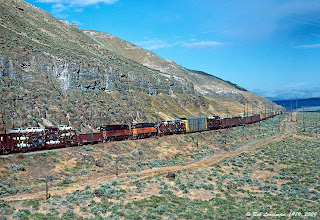 Rob says: "The two mid-train Locotrol SD40-2 slaves are bracketed by four loads of autos off the SP bound for Spokane and by empty chip racks returning to the mills around Coeur D’Alene, Usk, St. Maries or the load-out at Tyson Creek. Behind that are eight or so copper concentrate loads off the SP en route to Anaconda Corp., followed by a long string of empty grain covered hoppers heading back to eastern Montana and the Dakotas. Except for the British Columbia lumber that likely was in no hurry to get anywhere, there was little or no transcontinental traffic on the train. Nonetheless, the remaining less-than-transcontinental traffic was sufficient to fill out this full-length 200 train."