Eastern Washington Gateway Railroad was on the move as numerous, heavily charged electrical storms brewed, collided and moved through Central and Eastern Washington during the night of Thursday (Thor’s Day) May 4th and into small hours of Friday the 5th. Though I myself was not working, I decided to forgo sleep and exploit the opportunity to follow my colleagues Engineer Ted Curphey and Conductor Gary Durr headlong – literally – into the storm(s) to bag some lightning-slash-train images. Early on it seemed I had made a bad bargain: a previous storm had petered out. Then, as the crew began setting out empties at Almira, a fierce storm began exploding on the near south-southwest horizon. Lightning flashes could be measured less than seconds apart. Thousands of mostly horizontal intracloud and many vertical, negatively charged imixed with unmistakable positively charged cloud-to-ground strikes (as seen in the left background of the image) illuminated the ominous atmosphere in paroxysms of divine flash bursts. Here, just past MP91, at Hanson Ted brings the train into the longest tangent on the line as an intracloud and a stepped leader bolt from Thor's Mjölnir discharge. Yet there are just a few rain drops. I am dry though the air is noticeably electrified. Image made, I’m en route to the next station of Hartline and then all Hell breaks loose as the skies open and a deluge of biblical proportions with golfball sized hailstones is unleashed. Wipers: unable to keep up. Fusilladed: like the business end of a 50 cal. Lightning: strobing in rapid succession. I am forced to a crawl but make into Hartline before Ted and the train - itself sustaining numerous strikes - where the inclemency finally subsides nearly an hour later. 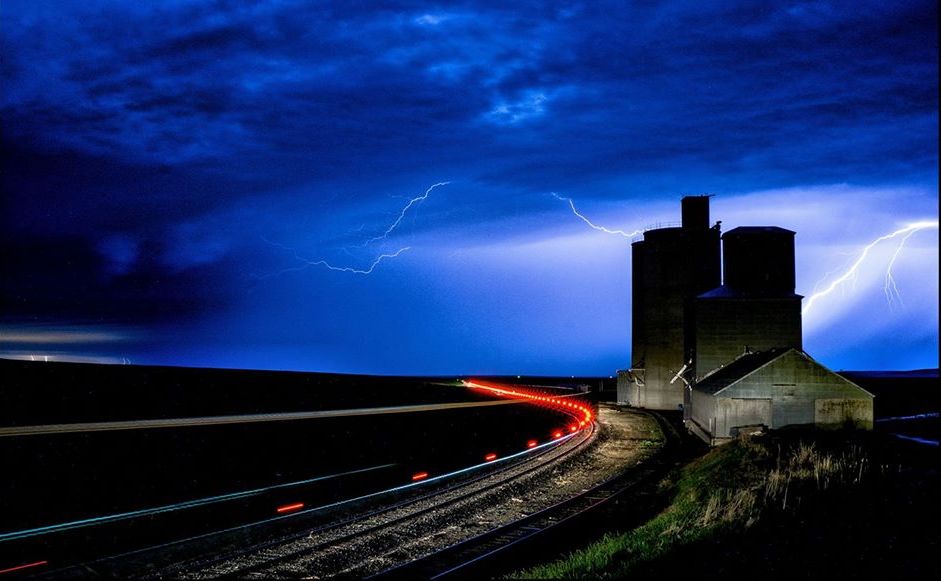