Heaven’s peaceful eye, rising, faithfully, effortlessly, paints her ephemeral pastel chef d’oeuvre as wispy clouds float across its crepuscular creation on a stiff morning breeze. At Fahrenheit 32 - on the cusp of stasis - opaline snow, slowly, still, steadily recedes to reveal the forlorn landscape as it has and will for millennia past and future. And though winter is a stubborn old man, she breaks his frozen fingers to thaw her earth by day only to let him reclaim his icy grip upon her orb overnight wreaking havoc on the vulnerable infrastructure of this venerable railroad forever known as the “CW” (Central Washington Railroad). At MP82, just a few jointed-rail-sticks west of the ghost town of Govan (elevator in the right background), Engineer Jerry Miller helms Eastern Washington Gateway’s HM02-2 as it undulates the contour of the steppe-like topography, like the sun, rising and descending ad infinitum the train begins its increasing to 1% corniche drop into Rattlesnake Gulch along Jarchow and Bender Lake, crossing Childers and Corbett Draw all the while dwindling the few miles to the next hamlet of Almira at a comfortable twenty some-odd miles per turn of the hand with thirty-in-tow “mtys” destined for the waiting grain spouts and the hardy men that man them twenty-four more miles down-the-line at end-of-the-line Coulee City where Jerry and his Conductor F. M. Simon, calling it a day’s work, will tie down and tie up. 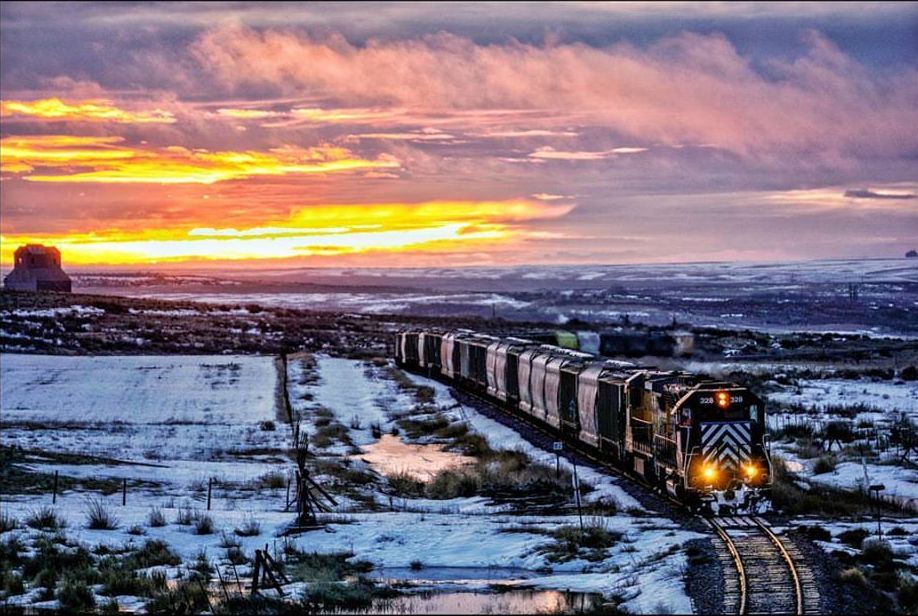