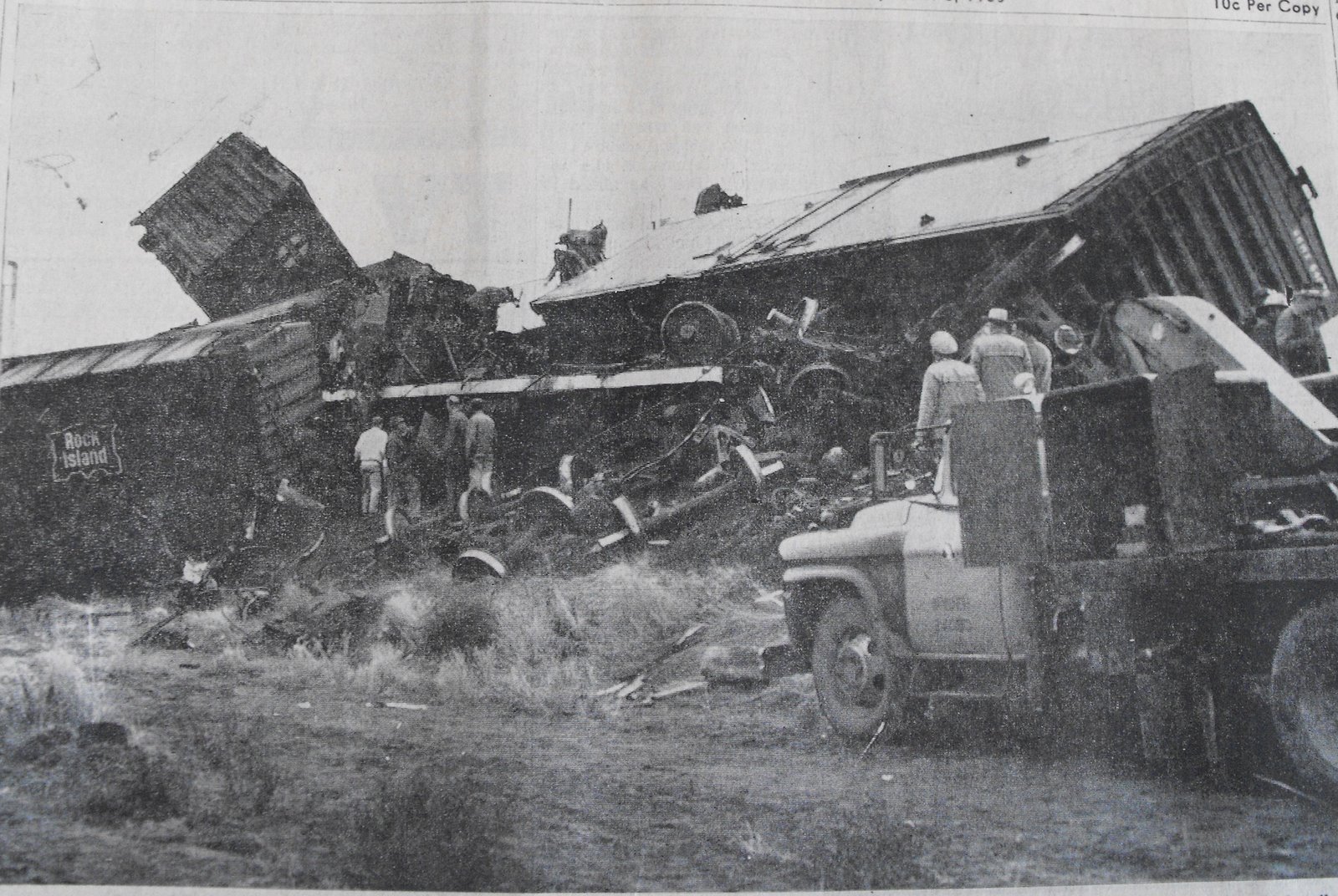 Wreckage of two Great Northern freights near the Quincy business district is shown here. The upended boxcar is leaning against the front diesel unit of a mainline freight. Front end of the cab, smashed in beyond recognition, is to the right of the upended car. Immediately in front of it is all that was left of a switch engine in which two trainmen were killed. All of the superstructure was stripped off by the three boxcars shown here, loaded with aluminum ingots, which piled forward and swept all of the cab off of the platform. 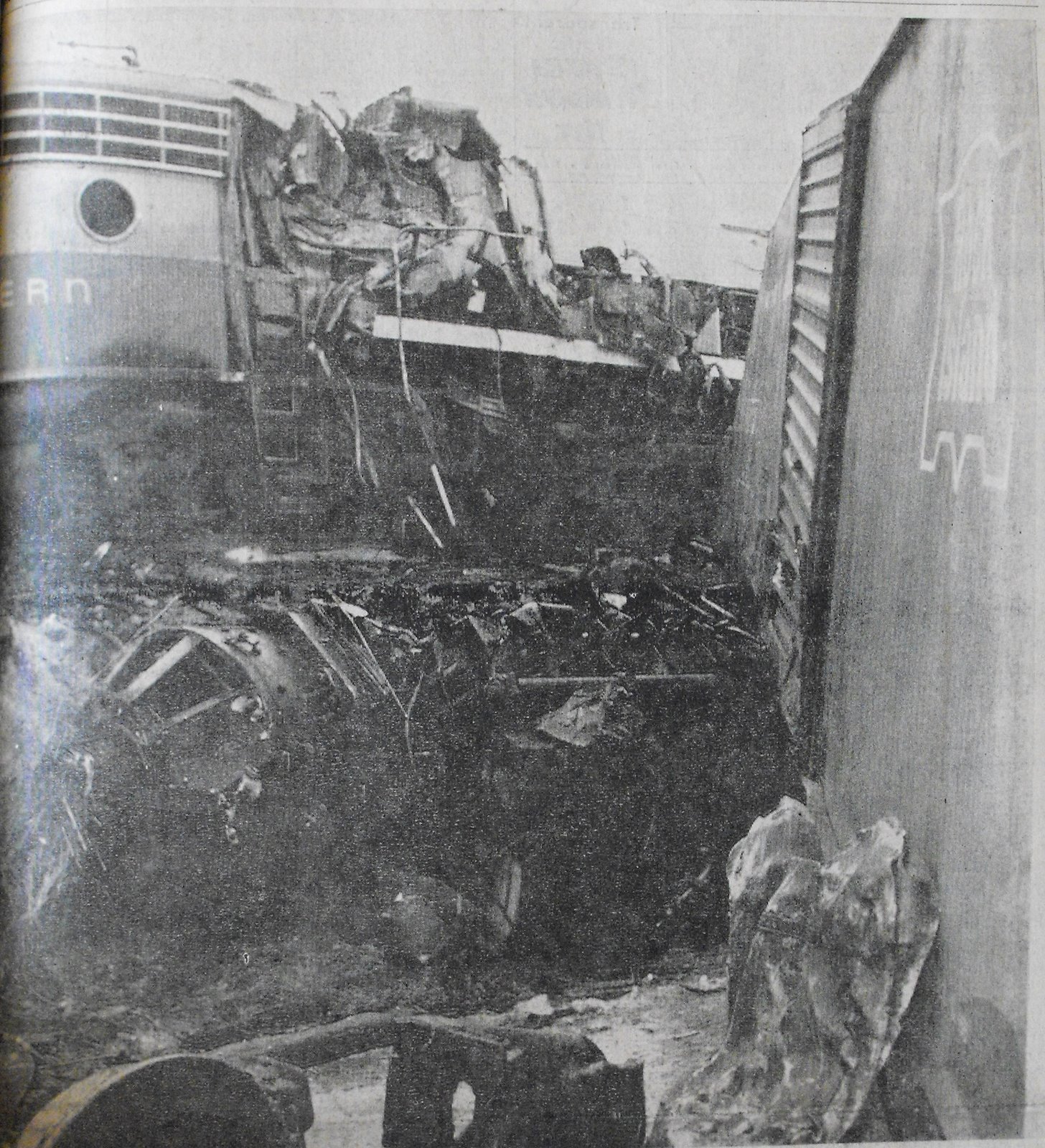 Graphically showing the point where a Great Northern local freight rammed a parked mainline freight in Quincy Wednesday morning is this photo from the Grant County Sheriff’s office. The diesel locomotive on the left is the leading cab of a four-unit engine that was stopped on the main track. The wreckage on the right is all that was left of a smaller switch engine pulling 14 cars which failed to go onto a siding and smashed head-on into the other engine. Cars behind the smaller engine piled up and over the superstructure, sweeping off the cab and killing the fireman and engineer. Motor of the small locomotive may be seen in the foreground. The local was eastbound while the parked mainline freight was headed west.

Quincy—Two trainmen were killed and one other critically injured this morning when a local freight of the Great Northern Railway ploughed head-on into a parked mainline freight in the middle of Quincy.

One other trainman was in the hospital reportedly in good condition and two others were released after treatment following the accident, which occurred at about 6:45 a.m.

Dead were Nick Winker, 38, Spokane, who died in the Quincy Valley Hospital after the wreck. He was listed as engineer of the local which ploughed into the parked freight. Killed immediately on impact was Ray Barnhardt, 44, East Wenatchee, fireman of the local.

The collision occurred about 100 yards east of the Central Avenue crossing in Quincy. The westbound local, pulled by a switch engine, was supposed to go onto a siding alongside the parked mainline freight, composed of 144 cars westbound for Seattle. An automatic switching signal located about 100 yards west of the Central Avenue crossing apparently did not work and turn the 16-car local onto the siding.

The local, drawn by a single switch engine, smashed into the front of the four-unit diesel which was at the front of the through-line freight. The two cabs were so badly twisted together it was hard to tell they had once been separate units.

Four of the cars immediately behind the local locomotive immediately telescoped the switch engine, sweeping off the superstructure of the locomotive and piling cars on both sides of the track close to Quincy’s business district. The Quincy fire department was immediately called to quell the danger of fire, but none broke out.

The cars eastbound from Wenatchee were loaded with aluminum ingots from the Alcoa Aluminum plant at Rock Island. Their weight carried them forward, piling them up on end, on their sides ans smashed below the grade of the track. The local, sometimes called the Alcoa Local because it hauls aluminum from the plant near Wenatchee, was apparently traveling at such a speed that there was no chance of stopping when the siding switch failed.

The four diesel units on the long freight parked on the mainline remained on the track, but the front end of the leading one was missing where the local switch engines smashed into it. Trainmen were working to pull the two unit apart and clear the tracks for operation at noon today.

The wreck also tore out communication lines which parallel the tracks. The 144-car mainline freight stretched past the east city limits of Quincy until after the noon hour, stopping the flow of traffic from north to south. The Central street crossing was cleared as the only main arterial across the tracks soon after 8 a.m.

Crash Cause is Studied by Railroad

Quincy—Great Northern Railway agents continued to probe the cause of a head-on accident Wednesday in which an eastbound local ploughed into a parked westbound mainline freight at Central Avenue close to the Quincy business district.

Everett Luse, switch and signal foreman for Great Northern, said that the accident did not result from the failure of automatic switching equipment at the wreck site. He said eastbound trains going on the siding are required to stop and manually switch the rails to put the train on the siding.

He said he did not know why the eastbound Alcoa Local did not stop but continued to head straight into the parked mainline freight, composed of 144 boxcars. The 14-car local was loaded with aluminum ingots from the Alcoa plant near Rock Island.

Normal procedure, he said, is for the train going on the siding to stop and manually change the switch. He said a flagman from the parked freight attempted to stop the other train. Both engineer and fireman aboard the local were killed. The engineer of the parked freight, John Bergman of Spokane, was still in critical condition in Spokane today.

Funeral services for Winker were set for 10:30 a.m. today.

From the Spokane "Chronicle."