Date can't be later than 1957, when the Presbyterian Church caught on fire. The lake was filled in 1951, so no earlier than that.

There are a LOT of changes in the 70 or so years since this photo was taken. Of note is the railroad tracks are laid out a bit differently through the area where the roundhouse is. The stockyard to the left of that is clearly in use.

About 2/3rds of the grain elevator complex is still standing, though it has been enlarged significantly, with more steel and concrete grain tanks in place now.

The grocery store, to the left of the grain elevators, has been extended to the alley, so is a lot larger today. It's also the only store in town now, where in the photo there were 2 others as well.

Find the depot, then note where Main Street is, the wide street heading towards the bottom right of the photo from there. The nearest building on the north side of the street, Einar's, is now an empty lot. The next group of buildings on that side of the street are still standing, though many businesses have come and gone over the years. The one with the whitish face is now an art gallery, and on either side, the two taverns are now closed. The lighter colored building across the street is now the city hall. At the time of the photo, I believe it was a bank.

Continuing down Main from where we were, a large tree obscures the back of the Thompson Hotel. The long building next to it now houses the library and insurance office. Back then one of the grocery stores was there. Across the street, the building with the black roof is gone, replaced by a larger building holding a tractor dealership. The buildings behind it in the same block are largely gone, with the lot filled with tractors and combines.

Back to main, the rectangular white building across from the one with the black roof now houses the post office and an art studio run by Don Nutt. The next building, with the rounded sides, was later used by Coulee Co-op/Cenex/Aglink, and was torn down within the last 10 years. Next door is the old Lee Theater. This building was torn down decades ago, and is now where the current Aglink building is.

Moving to the upper right of the town photo, the little white building near the intersection of the highway with 2nd street, is an old gas station, but is still a gas station, now run by Aglink. The Banks Lake Brew & Bistro is in the place now. Directly south of there is the old Washington Water Power substation, a site now occupied by a few homes.

In the lower right of the town photo is the rodeo grounds. The claim is that the first rodeo there was in 1952, so could this be a relatively new site?

Note all the springs in the lower part of the photo. The municipal supply is from a well site that was established along the row of bushes below the rodeo grounds. A large tank sits at the end of the trees there today. All the springs have been a boon for wild growing Russian Olive trees, and the better part of the bare area in the bottom of the photo is now full of them.

In the bottom right of the bigger photo, you can see where the railroad tracks cross what is now road J NE. It looks like the site of a spur track coming off the main track, out of the photo on the right, once was here. I don't think it was part of the Seattle, Lake Shore & Eastern alignment, instead being a spur off the Central Washington. More of the Lake Shore can be found above the canal on the left of the photo, from about where the outlet gates are, running towards the upper left, where it intersects with the CW.

The lake is very full in the photo. The larger island seen, Crab Island, is far more inundated than we are used to seeing in the last few decades. The small island across the highway from town is a bit bigger now as well.

There are MANY more items that have changed. What can you find? 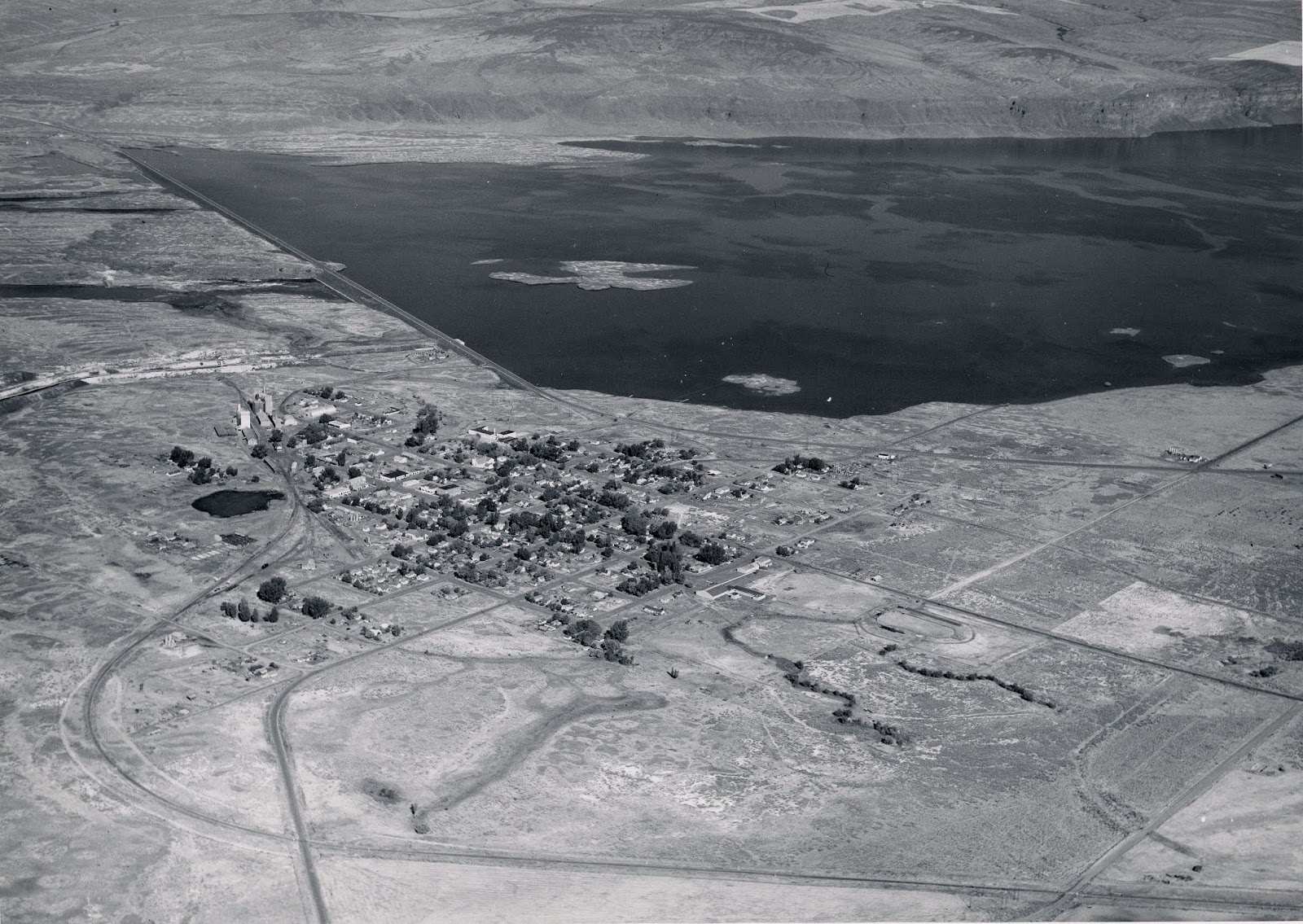