Progress Being Made On Dam

One yardstick to apply to the progress being made on Grand Coulee Dam was taken during a snapshot in May 1936. It was based on the tonnage handled by the railroad built for the purpose to move materials and equipment from Odair, near Coulee City, up the upper Grand Coulee, and then down the hill to the dam site. The story in the facts and figures was discussed in the MWAK “Columbian,” the house organ of the general contractors. It read as follows:

A locomotive made daily trips from the mainline at Odair, 31 miles away, to Electric City. The low-geared Shay continued the additional five miles to the government warehouse by swinging wide about curves and along the cutbacks of high abutments.

From the cement silos to the warehouse yards is two miles, about 4000 feet as the crow flies. Up and down this grade, the Shay creeps along at the rate of from eight to ten mles per hour. This gear-driven engine is used in place of a road locomotive becasue the steep grade requires it.

The explanation lay in the increaced cement shipments of 25 cars daily, with 72,000 pounds per car net; the 3,000,000 feet of timering arrived during the last two months and the 187 carloads of steel for the concrete-carrying trestles.

The 2087 carloads brought in meant 962 cars of bulk cement for the cement silos, and the 1125 of miscellaneous, such as timber, steel and explosives. Cement itself, both bulk and sack, reached 70,000,000lbs since the beginning of work.

The 120,000 net tons that had passed over the railroads represented 55 percent of all tonnage checked by the company warehouse, even though in the 21 months of receiving material, the railroad had only been in operation 8 of them.

Transportation equipment consisted of two engines, the road locomotive and the Shay. The road locomotive was built for the Southern Pacific Railway in March 1903. It was purchased by MWAk on July 29, 1935. The road locomotive had been in operation for two and a half months at the time of the article. It was making a daily trip to Odair, leaving at 5am and returning at 10am. The engine weighed 135 tons and was capable of carrying 3500 tons per train, or about 50 carloads of cement, the amount required at the peak of operations. It was derelict and out of service in 1937, likely due to age, and was scrapped at the dam.

The 80-ton Shay, was built for the Charles R. McCormick Lumber Co. as their #200, on May 27, 1926. This logging line had operations located around Quilcene, WA. It was purchased by MWAK on January 28, 1936. It operated from Electric City to the government warehouse, transfered materials about the yard at Electric City, unloaded, reloaded and carried them for the dam site whenever needed. It’s capacity was 5 cars downgrade and 5 empties up. It was always placed on the downgrade side of the cars it was moving, so it backed down the hill to lead it’s loads, in order to keep the high point of water around the firebox, making a boiler explosion less likely. This engine was scrapped at the dam in 1949.

The line did not sport a turntable to turn the locomotives. It did have a number of switchbacks in order to get down to the level of the warehouse near the river. From there material was trucked to wherever needed.

Train service and maintenance took place during the second shift only, using 30 men. Track was kept up by two section crews, each with six men and a foreman.

The storage yard at Electric City was used because of the lack of a suitable space at the dam site proper. The yard had more than adequate space, being 4,000 feet long and 200 feet wide. Loads were spotted about the yard over three lines of track.

Two cranes took care of loading and unloading heavy materials, one a locomotive crane with a 50-foot boom; the other a 75-ton gantry crane. Also in the yards was a repair shop and a steel bending machine, where reeinforcing steel, as for concrete, was cut and shaped. In the yard were stored much structural steel, pipe, machinery, timber, bridge steel, piling and other bulky materials.

Transportation equipment, with the exception of the cars that actually carring the materials, belonged to the company and was at it’s disposal. With the railroad owned by the government, the lines would be taken over by the government on the completion of the dam.

The shay is pulling empty cement boxcars through the cut at the northeast end of Grand Coulee. This area later became the back entrance to the USBR Grand Coulee Project Office and Industrial Area. Photo courtesy of the Coulee Pioneer Museum. 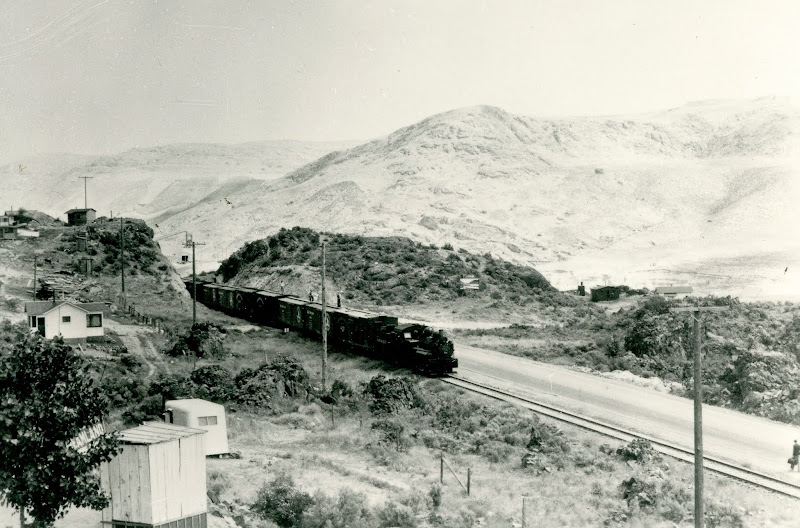 The former Southern Pacific engine, repainted to honor Governor Martin for the first official train to the dam, is now out of service and being prepped for scrap, after having been worn out after many years of heavy use. Photo courtesy of the EWU Hu Blonk archive. 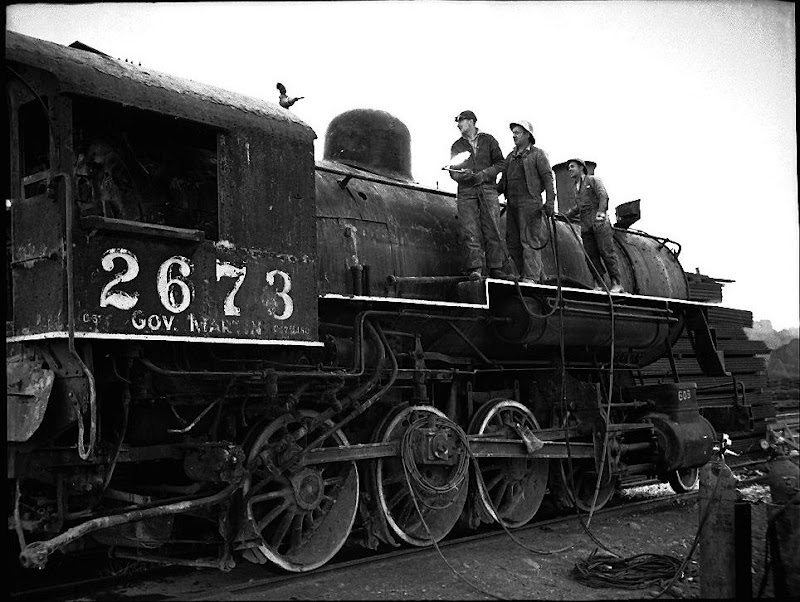