The Chicago, Milwaukee, St. Paul & Pacific, also known as the Milwaukee Road in later years, was always an innovator in the railroad field. A notable accomplishment was the electrification of its mainline tracks through the Rocky Mountains and Cascade Range. Electric locomotives of the 1910s were far superior to steam engines of the period.

Why are speaking about the Milwaukee Road, when the line didn't operate anywhere near the Grand Coulee area? Their mainline bypassed Spokane many miles to the south, though there was a branchline to the city. The main route continued west via Othello, then over the Saddle Mountains to Ellensburg, continuing over the Cascades to Tacoma.

Digging into the details of how cement came to Grand Coulee leads one to find out how the Milwaukee Road was deeply involved. Recall the dam project would take a lot of cement, enough so that six plants in the Pacific Northwest were engaged to provide it, via boxcar, to the dam site. One was on the branchline from Spokane to Metaline Falls, the Lehigh Portland Cement. Lehigh had an enormous output of cement, providing more than any of the other five plants. All of this traffic was hauled by the Milwaukee to Spokane before turning over the cars to the Northern Pacific for further hauling to Odair, then to the dam.

Having this traffic was important enough to the Milwaukee Road that after World War II was over, their marketing department saw an opportunity, as the other area railroads did, to note that Grand Coulee Dam was an engineering marvel and did what they could to tout it as one of the wonders of the world. To that end, images of the dam popped up in advertising, postcards and even playing cards.

Postwar passenger service on US railroads was a time of booming ridership, with most every railroad putting on new streamlined cars with sleek, new, diesel locomotives. In an effort to outdo the competition, a dome-topped passenger car was developed by the Chicago, Burlington and Quincy Railroad (CB&Q) in 1945. They took a regular streamlined coach and built a smaller upper level that featured 24 seats positioned lengthwise in a glass domed section, allowing the view of the passing scenery to be seen from all directions, versus the 46 seats remaining in the lower section. 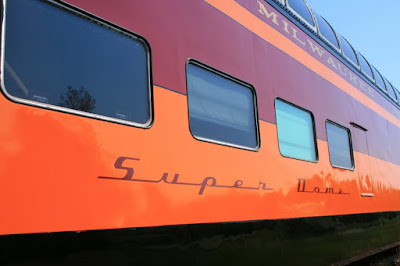 This new car was an instant hit and soon the CB&Q had long-distance trains featuring no fewer than five dome cars per train. Soon every railroad that had generous overhead clearances had dome cars. In the early 1950s, the Milwaukee took note of a newly designed car from the Pullman-Standard Car Manufacturing Co. It featured dome along the full 80-foot length of the car. This allowed seating for 80 people 15 1/2 feet above the rail in the dome, and 28 below in the lower level. The Milwaukee signed up for ten of these cars, labeling them “Super Domes,” which were delivered in 1952.

Because of that large amount of glass, the car needed a very powerful air conditioning system, which took up a portion of the lower section. Included in the car was a small kitchen, making the car an even stronger selling point in that drinks and light refreshments could be served.

Because of that need for non-passenger space in the lower level of the car, a thick partition was constructed to help drown out the sounds of the mechanical equipment. To help spruce up the interior, the prominent architectural photography firm of Kaufman and Fabry of Chicago was hired. The partition was decorated with a lighted pictorial mural in full color, furnished and installed by Kaufman. This mural, with special Luminator lighting, had the appearance of a picture window frame without glass, the frame being painted the partition wall color. One car had a photo of Grand Coulee Dam. 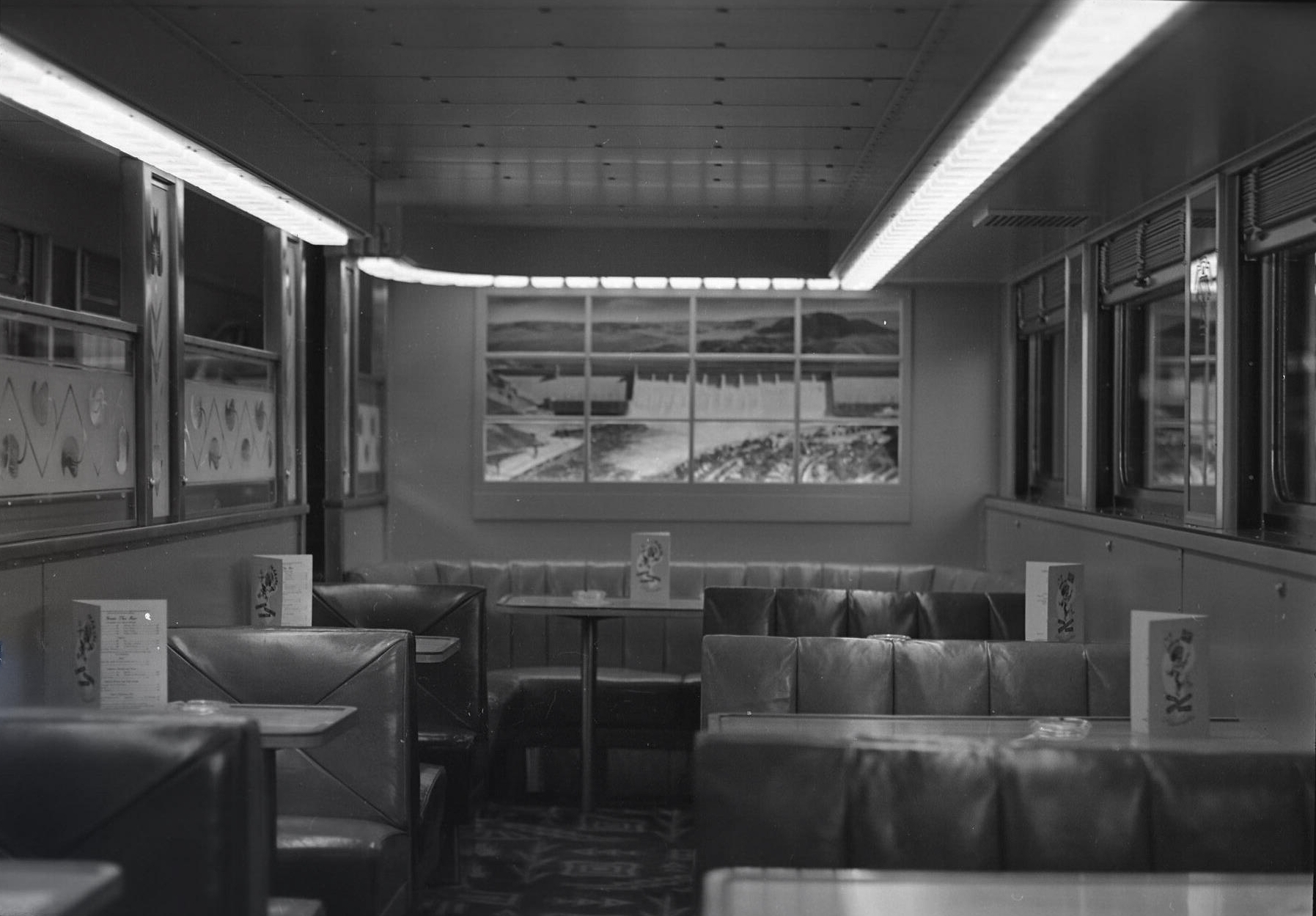 The exterior paint scheme consisted of the traditional Milwaukee orange and maroon colors with black underbody. Included was the running Hiawatha Native American character logo, a Milwaukee trademark, complimenting the name of the train running between Chicago and Tacoma, the Olympian Hiawatha.

The Olympian Hiawatha was discontinued in 1961, and six surplus dome cars were sold in 1964. The remaining cars eventually were passed on to Amtrak and still survive today, fully restored to its original look, though not with the Grand Coulee Dam picture inside.

The photo of the interior of the car was taken by John Barriger III, a prominent railroad president, who liked to spend his time off riding the named trains of other railroads. He would usually ride in the end car and take images of the passing towns and scenery along numerous lines, including the Great Northern in Washington State. He toured on the Milwaukee Road numerous times and his large photo archive, now part of the St. Louis Mercantile Library in St. Louis, Missouri, is now the home to all of his images, including this featured one.