As part of my collection, I have this stock certificate. 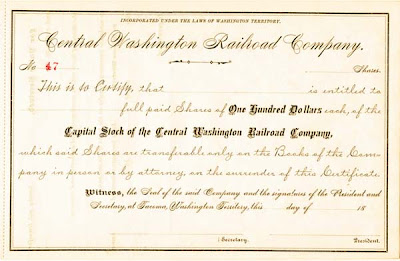 The Central Washington (CW) started building west out of Cheney, WA, while the SLS&E was building west out of Spokane. The SLS&E ran out of money near Davenport, though it had some grading completed all the way to Coulee City. The CW was much better financed and was completed to Coulee City in 1891. The residents of Davenport gave the SLS&E enough money to complete a line to their town, but then the Northern Pacific bought the SLS&E in 1890.

The SLS&E became part of the CW and the section between Spokane and Medical Lake was abandoned right away, as it had some pretty steep grades cominp up past Garden Springs.

The remaining section of the SLS&E out of Davenport survived until 1983, when Northern Pacific successor Burlington Northern (BN) abandoned it.

The CW had a few name changes between construction and today. It became the Washington Central, then the Northern Pacific, then the BN. BN sold the branch to the Palouse River and Coulee City in 1996. The state of Washington bought the line in 2007 and it is now operated by the Eastern Washington Gateway.

It is still referred to as the CW.

A stock certificate collector on pinterest says on 28 of these certificates were issued. Could that be true?

I have no idea for sure.