The Railroad Tracks to Waterville

A citizen of Waterville received a copy of the below letter:

To Land-owners in the vicinity of Waterville:

The enclosed circular, read in connection with this letter, will explain
a situation that is of direct interest to you.

The Great Northern is building a line up Moses Coulee into the Big Bend
country. They come up Moses Creek, follow the Douglas draw as far as the old Hetley place where they swing to the northeast seemingly pointing toward the head of Grand Coulee. They will build as far as Mansfield this year, which is up the East Foster Creek country. Where they will ultimately go is not known to the Public. There are some indications that they will proceed down Foster Creek by way of Bridgeport, connect with the line building south from Oroville, and postpone for a time the building of a line from Wenatchee up the Columbia River. In that event the Moses Coulee line will become a very important branch of the Great Northern. It is to be operated from Wenatchee.

Naturally, the people in and about Waterville did all they could to
induce the railroad people to swing their line far enough west to reach
this place. The Great Northern surveyors ran in here on two or three
different routes; but, owing to the topography of the country, it was
found impracticable to bring the main line around by Waterville, and the
only solution of the problem was found to be the building of a branch
from Waterville to the Moses Coulee line to connect at Douglas, a
distance of four and a half miles without switches.

The Great Northern declines to build this branch for the accommodation of
the people in the Waterville county, because it is plain we will have to
haul our grain and other freight to and from the Great Northern anyway.
So the only way for us to get help is to help ourselves.

With this in view a movement was started here to build our own line from
Waterville to a point near Douglas. We have met with vast gratifying
results. Fifty thousand dollars was pledged the first day. The responses
from the farmers and towns-people are more nearly unanimous than we
expected; still, here is a situation that is going to crowd us to the
limit, and we feel that every man that is to benefited ought to help to
the extend of his benefit.

Your own land lies in such a way that it will cost you more to haul your
wheat to the Great Northern than to Waterville. It goes without saying
that this will affect the price and saleability of your land. Remoteness
from market depreciates the value of land, while nearness thereto always
increases the value. Besides nearness to a thrifty, growing town will not
only increase the value of your land, but render it much more salable
should you ever desire to dispose of it.

Taking these matters into consideration we feel sure you will be as
willing as others are to help in the struggle for better accommodations
and the general advancement of this particular locality. You can afford
it, for you outlay will be returned to you in benefits to you property,
while without these benefits it will at least stand still as to value,
while lands nearer the railroad are advancing.

The citizens of Waterville eventually built their own railroad, the Waterville Railroad, which connected with the GN at Douglas. The GN helped out with the manpower, rails, and motive power and the Waterville was in business by July 1910.

The tracks were removed in 1954 after getting permission to abandon the line. Seems there were many washout a few years earlier that the little railroad was never able to recover from.

Very few parts of this line are visible today. You can make out a little from the satellite view. US 2 runs next to the old alignment and you can see it followed a gully of sorts that could provide enough water during spring runoff to wash out the tracks. 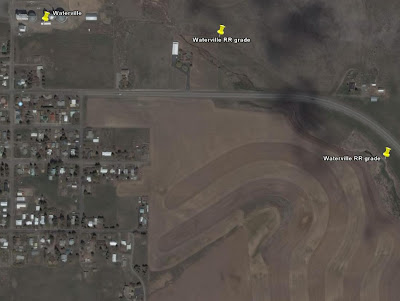 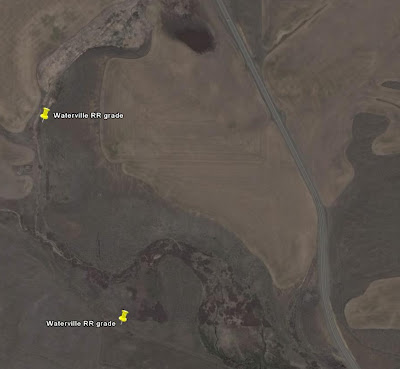