Post office established December 20, 1911 and discontinued June 15, 1916. Mail was then handled out of Adrian.
Location on the Northern Pacific, 9 miles south of Coulee City, in Dry Coulee (SE-SE, NE-SE Section 8, T23N, R28E for those of you who really want to find it).
At the time the post office opened, many homesteads in the area were being registered. The demand for supplies at the Ross store were so heavy that the stock was exhausted, except bacon. Consequently when the time came to name the post office which was being put in the store, Bacon seemed to be the most appropriate name.
A train from each way daily brought and received Bacon's mail. There was a siding, a section house, railroad worker's bunkhouse, but no depot. In the summer of 1916 Mormon crickets overran the country and people deserted their homesteads. That spelled the end of the Bacon post office. Those who had held on had to go to Adrian, a distance of about 12 miles south, for mail.
When the section of railroad between Adrian and Coulee City was abandoned in 1979, the station sign for Bacon supposedly went into the Monte Holm collection in Moses Lake, who also did the scrapping.
In the photo, Pinto Ridge Road runs between Coulee City and SR28 near Stratford. Not shown among the roads is the one to Summer Falls State Park which starts at the intersection of the old railroad line (in black) and Pinto Ridge Road. It goes into the coulee just right of center. 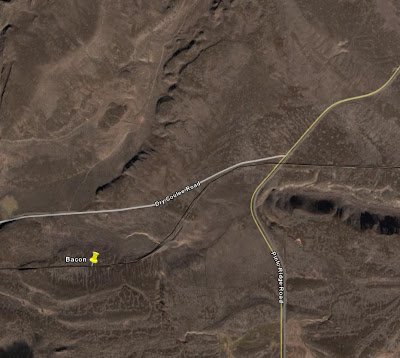