Part of a longer piece written by L. R. Keith.

Reprinted with permission of Mr. Keith.


The railroad junction of Odair was never a major population center, but it was an important place for those people who were building Grand Coulee Dam back in the 1930s.

“Roy Ramey graduated from the University of Idaho in 1940 with a teaching degree. Unable to locate a teaching job, he went to work for the Northern Pacific Railroad as an agent-telegrapher, a skill he had learned from his father. This was before people worked a forty hour week with vacation, sick pay, and other benefits. He started out on the Extra Board as there were no regularly assigned jobs available in the midst of the Depression. Extra Board meant he substituted for people who could not work that particular day. Since money was so scarce, people were very reluctant to fore go a day's work except for illness or a death in the family. Roy usually got jobs for only one or two days at a time. He earned sixty-five cents per hour only for the hours he actually worked, although he traveled over an area stretching from Toppenish, Washington to Paradise, Montana. He received no allowance for room or board, or any expenses, although he did get free travel on the trains.

“On one assignment he left his home in Kendrick, Idaho at four p.m. on a Monday, rode the train to Toppenish via Spokane, worked his eight hour assigned job, and then was bumped by a person with more seniority. He slept that day in a city park at Toppenish then rode a train home, arriving a two a.m. on Wednesday. For that eight hours work, plus all the time he spent traveling, he earned five dollars. Clearly, things were really tough working on the Extra Board. He was gone so much there was no thought of marriage until he could get a regularly assigned job.

“Finally that happened in the fall of 1941. Roy and his college sweetheart Maxine were married in early November that year, just a few weeks before Pearl Harbor. When they married, Maxine lost her teaching job, since the rule that had prevailed during the Depression was still in effect. That rule said a family could not hold two jobs, since so many men with families were unemployed. The young couple's first home was in an outfit car at Odair, Washington.

“Odair was a large railroad siding about a mile out of Coulee City, Washington. It was there that all carloads of freight going into the construction site at Grand Coulee Dam were interchanged from the Northern Pacific to the Government Railroad.

“The war effort was just beginning to pick up after Pearl Harbor. There were many fears about what Japan and Germany might do, so the Air Raid Program was started all over the United States. Air Raid Wardens volunteered to watch the skies for airplanes. They were given a number to call should they spot any suspicious aircraft. They were to report a description of the plane and state the direction it was seen to be flying. Due to the expectation that Japan would attack the West Coast, towns all over Washington had Air Raid Wardens to watch the skies and also keep an eye on homes to make certain they had their blackout shades pulled at night to prevent artificial light from shining out, light which might provide a target for enemy planes.

“Since Grand Coulee Dam was considered a high risk for enemy attack, the siding of Odair represented more importance than its population might indicate. At the time Roy and Maxine lived there, there were only four people in the community, a total of four, Roy and Maxine and two other people. Roy Ramey stepped up and volunteered to serve as Air Raid Warden in Odair.

"’There were usually one or two planes a day,’ added Maxine, who, as in all their sixty years of life together, was right there with Roy, watching the skies of Central Washington.

“Roy had been rejected by the military because he only has hearing in one ear as a result of a mastoid operation when he was an infant. However, his job was considered vital to the war effort, so he was frozen on the job for the duration of the war, as were all railroad employees. His work assignment during those years was nine hours a day, Monday through Saturday and eight hours on Sunday, all on straight time. He worked that schedule for nearly six years without a day off.” 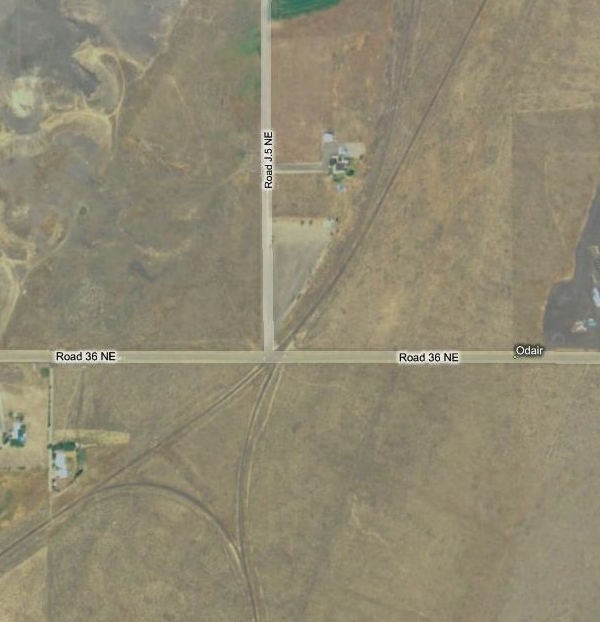