The First Train To Grand Coulee

Article I wrote for Them Dam Writers Online.


This first person report of the first official train to Grand Coulee Dam was written as that day's events took place on July 29, 1935.

Another milestone was reached yesterday in the chapters of the construction of the Grand Coulee Dam—the official starting of the government's railroad from Odair to the dam site, in celebration of which Governor Clarence D. Martin was “engineer,” and actually at the throttle all the way from Odair until the outskirts of Coulee Center, overlooking the dam site, was reached. It was a play day for the governor, and the best he had had in years, he said.

The governor carried out the atmosphere to the last detail, so far as costume was concerned. He wore the standard typically striped suit of the engineer. In the hip pocket was an immense handful of cotton waste, around his neck a flaming bandana, while a regulation locomotive cap rode high on the governor's head. It carried finer stripes, but his excellency was careful to explain it as regulation nevertheless.

Governor Martin looked the part of the locomotive engineer except he was too lean.

“Governor, you need more weight for the real picture,” some one sang from the crowd of about 200 at Odair to see the ceremony. The executive grinned.

“About the time this engine was being built, I believe, I served an apprenticeship as a brakeman and fireman, but I was too tall and skinny to get by the railroad requirements,” he said, “so I had to go into other lines and finally became governor. It wasn't my fault I didn't become a brakeman.”

The crowd close enough to catch the governor's words roared.

Swinging out of the cab of the 100-ton locomotive of the MWAK company, under which in painted letters was the christened name of the locomotive, “Governor Martin,” the state's magistrate busily began oiling the machine. Dexterously locating every oil cup, the oil fairly squirted as the crowd again applauded.

The oiling took some time because of a half dozen cameramen, moving picture operators with sound, standing the governor up every few minutes for a “shot.”

Mary Cole, daughter of C.M. Cole, reclamation bureau field engineer, with a huge mass of blooms in one hand flung a bottle of Columbia River water with the other at the locomotive cylinder in the dedication of the machine to the service of the MWAK. It bounced off unbroken but did crash when it struck a rock. Francis Donaldson, chief engineer of the MWAK, formally accepted the road from J.H. Miner, office engineer of the reclamation service, who acted in the absence of Frank A. Banks, United States reclamation engineer in charge.

“The letters MWAK stand for Mason, Walsh, Atkinson and Kier,” Mr. Donaldson said. “We hope when this project is completed it will mean more water and cash to your state.”

“I'll make a slouch of Casey Jones,” said the governor in a brief talk, as he swung into the cab. James E. O'Sullivan, secretary of the Columbia basin commission, acting as “brakeman,” gave “Engineer” Martin the high sign, and the engine, pushing a flat car bound in bunting, pulling another flat and two coaches, in which were nearly 100 guests of the MWAK, started amid the hurrahs of the spectators.

Governor Martin worked the whistle of the locomotive harder than he did the throttle, as it took an hour and a half to make the 30-mile run to the ridge overlooking the project.

“In Indiana, trains are required to whistle for every crossing. We went them one better,” he said, and he certainly did. Some two dozen cars passed the train on their way to the dam. Most of the occupants waved handkerchiefs, and every wave brought an answering long-distance transcontinental whistle out of the engine, the rims of the drivers painted white with other trimming presenting a grand spectacle.

A camera outfit snapped the train as it passed Steamboat Rock, and to be considerate the governor braked down and the train “crept” while the camera men worked. The guests were in no hurry to speed over the new roadbed, for when the train passed small pebbles at times “rained” from the grade into the borrow pits. However, there was no danger, as this was explained as a settling process. Besides, a pilot speeder, 10 minutes ahead of the train, carried one of the veteran pilots of the Pacific northwest.

He was W.I. McCarthy, for 30 years with the Northern Pacific and various rail construction contractors. He was the pilot of the first passenger train run over the North Bank road in about 1911.

The MWAK train, in charge of Superintendent C.F. Urbett, formerly superintendent of the Milwaukee road, pulled into Coulee Center, where the countryside folk had joined the townspeople in seeing the new train. The Mason City band was playing a lively air, under the direction of W.H. Austin, while Jack Wheeler, manager of the 42-piece organization, three months' old, received the congratulations of the visitors for the fine music.

Veteran Mike Cave, for years locomotive engineer for the Guggenheims on the mountainsides of South America in the mining of nitrate, said he had only one criticism of Governor Martin as an engineer—that was the governor did not chew tobacco. “He didn't spit once on the trip,” said Mike.

“Perhaps I did blow that whistle a little often.” the governor admitted, “but it was a good thing to let the people know the railroad is finally in action,” Over this road is going the bulk of the freight for the dam, and this big engine can haul it. However, down the final grade from Coulee Center to the dam, a 5 per cent grade, a Shay engine will be used. The train was left in Coulee Center, and Conductor Charles Hulen, Brakemen Tom Watson and Pat Gilbert, assisted by Guy Atkinson, of the MWAK firm, finally got their passengers aboard bus and car, while the band continued its concert. Coulee Center is on the top of a 5 per cent grade dropping down to the dam site. Several curves need a little straightening before freight will be handled over the rails down the hill, it was explained.

The trek of the passengers was to the dining room, where the “governor's” luncheon was served. Although so honored, the governor dined in his “working” clothes, minus the hip pocket full of waste, which President J.I. Kinman of the Spokane Chamber of Commerce removed from Mr. Martin's pocket, when the governor was talking to a group in Mason City about his engineering.

This dining room, a part of the vast eating house system of the MWAK, was comfortably filled with 150 diners, while the townsfolk and others crowded the windows and the doorway to hear the program. It was a luncheon of tenderloin steak, cold turkey, crab salad with a a pillar of ice cream six fingers high, with other things, and the crowd ate so long it was necessary to cut down on speeches.

The after-luncheon program was a sort of hurrah affair for Governor Martin, President Roosevelt, Senator Dill, Congressman Hill and the federal government.

Mr. Donaldson presided and, after introducing the executives of the MWAK, called on the governor. Wearing the MWAK's brass button No. 4500, which gave him the appearance of a road cop, but signified he had qualified to get a job with the MWAK, the governor got down to a prediction of a high dam without any loss of words, praising those who had sold the project to the state and the nation. These should feel complimented, he said. 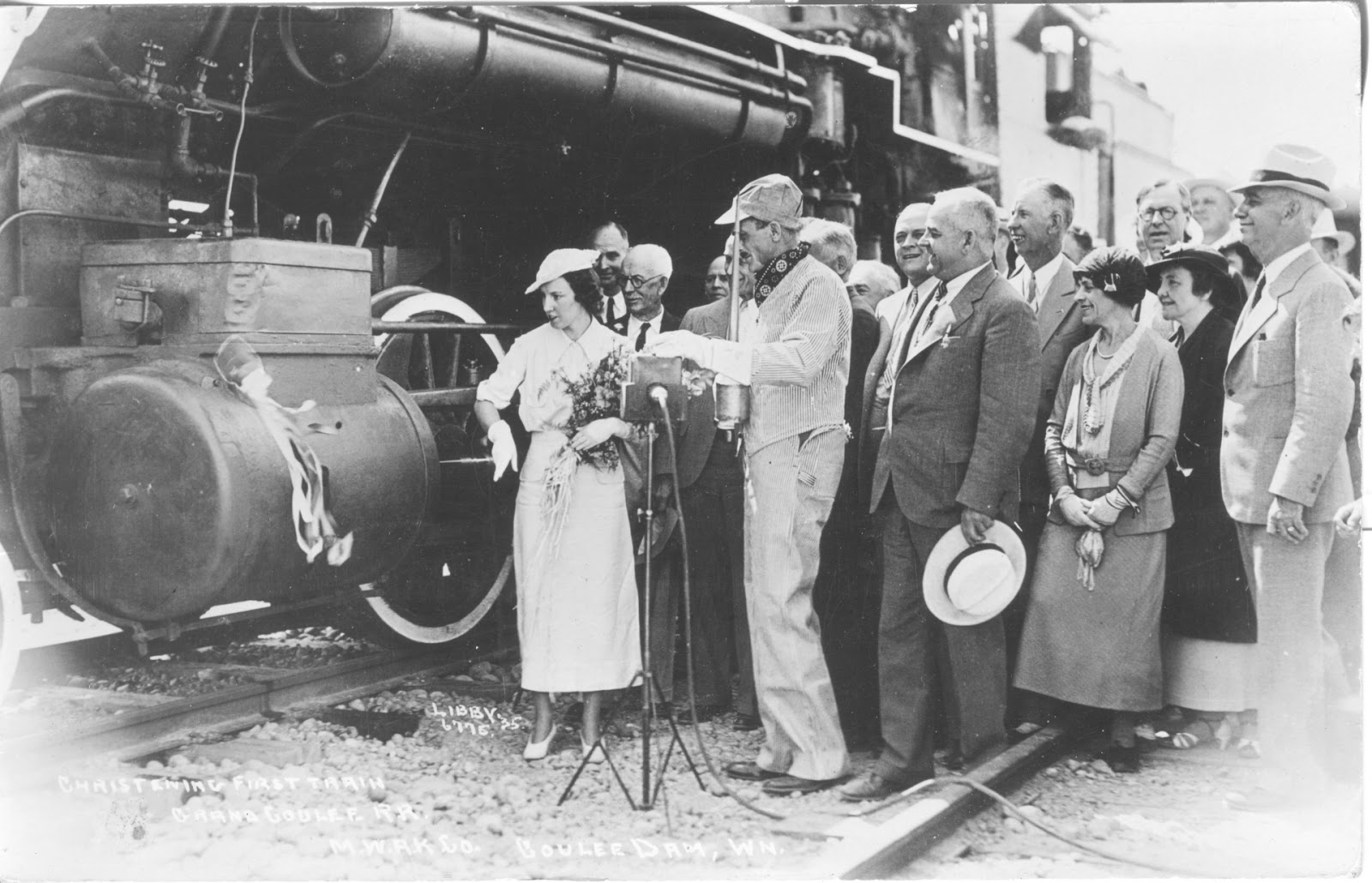 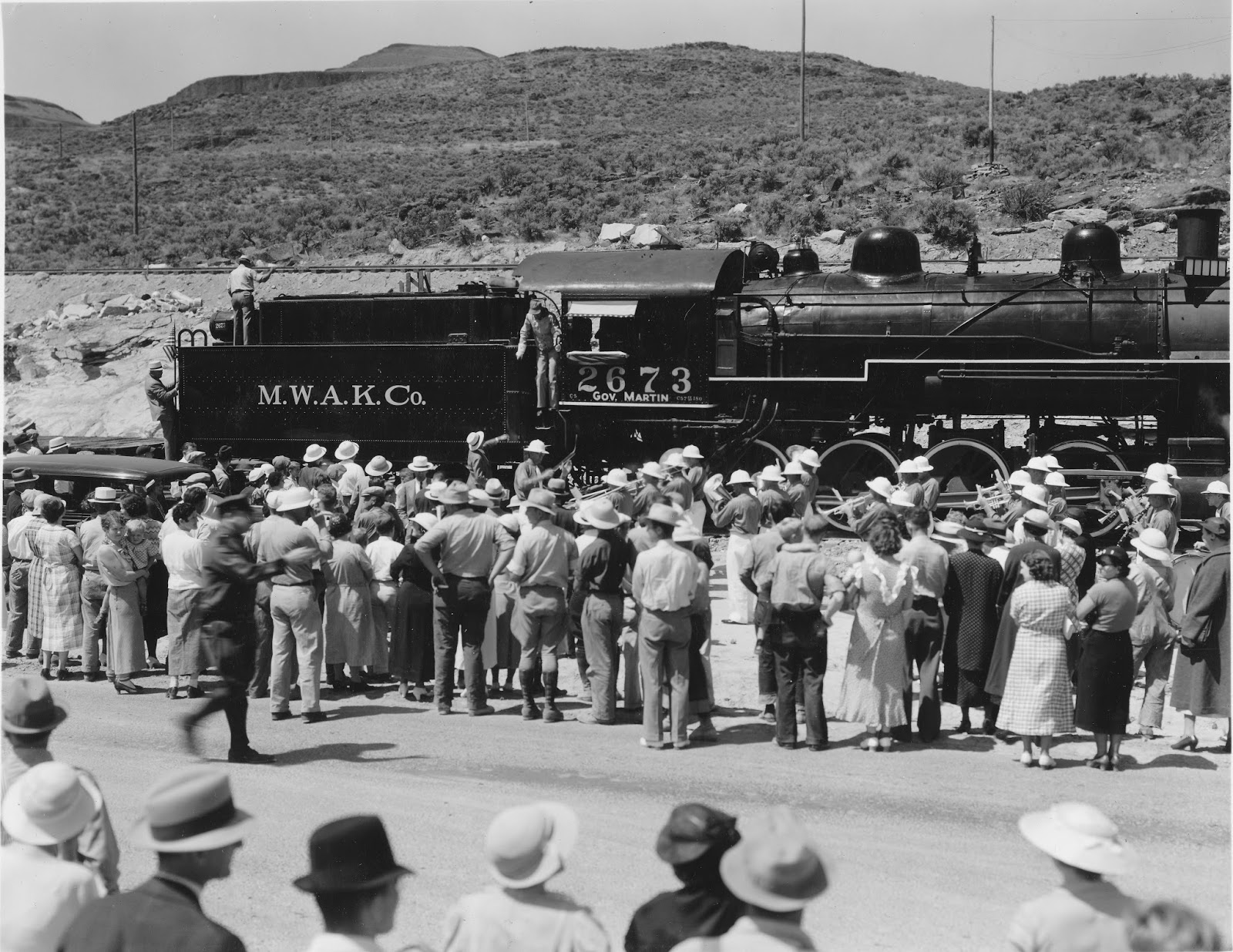 Comment on previous day's post (I couldn't find link): I lived a half mile away from this spot near Deep Creek for a year. I was always interested in how the RR meandered with many curves, unlike the GN track nearby. The intersection of these two tracks is on my to-do list for posting a street view on Google Maps.

It's a worthwhile place to visit. Better if you can get a train on either line.