On November 3, 1933, the Northern Pacific filed an application with the Interstate Commerce Commission for the legal authority to build the 28 1/2 miles of railroad to the Grand Coulee Dam site.

Charles Donnelly, president of the Northern Pacific, made this announcement in a telegram sent to the Slokane “Chronicle” in which he said:
“It is expected the Great Northern will share in the cost of construction and use of the new line, and negotiations in that direction now are under way.”

While Mr. Donnelly’s telegram did not state when work would be started building the new line, it is believed men will be put on the job sometime in December to rush completion of the extension by the following spring.

About 300 to 350 men will be given work building the line, local railroad officials have estimated.

Ultimately the NP did not build the line, as it was holding out for a deal with the government for exclusive rights to haul every last item into the dam via rail. The government balked at this deal and put out construction of the line to bid, won by David H. Ryan. The NP was to still furnish rails and fasteners to complete the line, which would be returned when the line was removed at the end of construction. 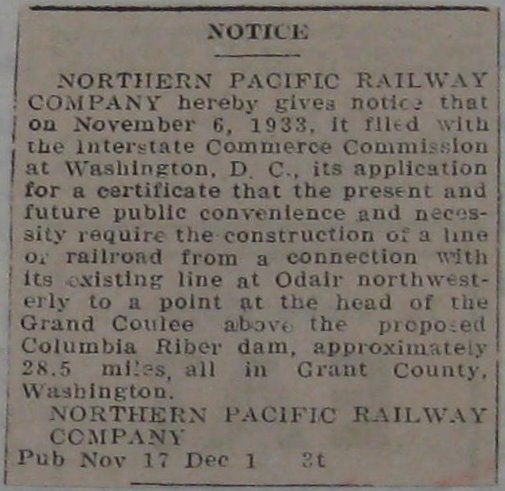