Stars by the billions populate the small hour Hite at night sky as Washington Eastern SD40-2 3910’s laser-like headlight beam provides a nice reflection of light on its nose and overall scene after snagging the usual five loads. Two miles west is the highest point on the CW Sub at 2538 FAMSL. Reached as a matter of properties owned by the Northern Pacific prior to its arrival and advertised as a locale to seed a “town” which never materialized. Viewed through the railings of the mobile stairs used to retrieve wheat samples from inbound loaded trucks of grain to be posited into one or the other crib, concrete, or stainless steel elevators; the only structures at this outpost save the Highline Grain truck scale station shanty outfitted with all the de rigueur human amenities including microwave and AC though sans a privy. It's the spartan, unheated latrine about a car length away. Just as we are like cowboys that ride steel horses into the night and history, Hite as with almost all the “living museum” elevator tracks along the vulnerable CW, one can still find near century-old as-harvested, crooked iron oak ties and tiny hash marks that litter the railhead where for so many decades the elevator hands have used and still use the manual fulcrum of the made-in-Wisconsin arm-strong car mover to spot covered hoppers and, until the early 80s, 40-foot boxcars under the respective spout. Lines like the CW Sub are truly living history and running on measured, even borrowed time. Some day only the stars will remain. 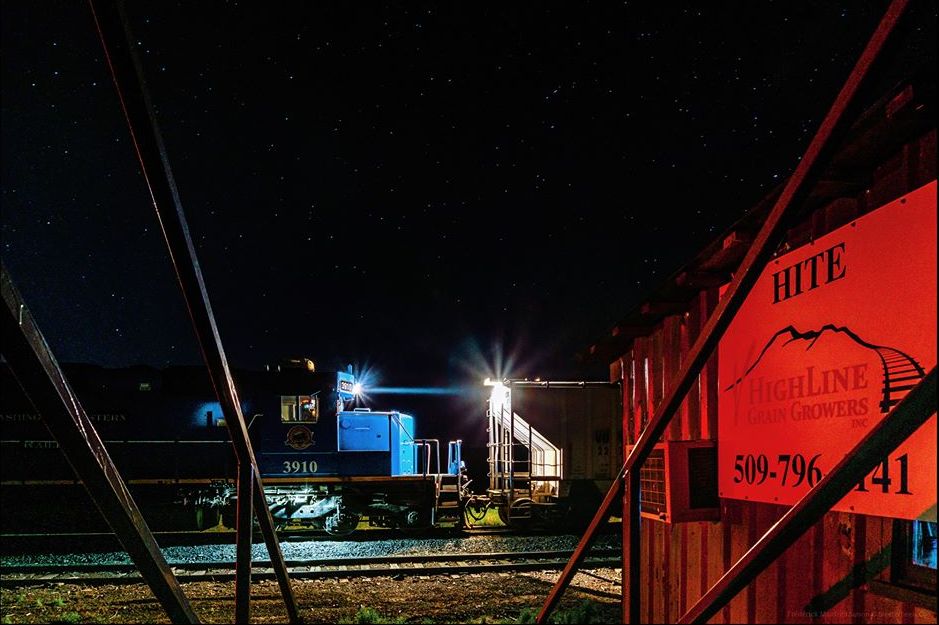