Clippings are from the Spokane "Chronicle."

Current photos of the plaque and bust courtesy of J. Kemble.

Photo of the greater scene at Coulee City from my collection. 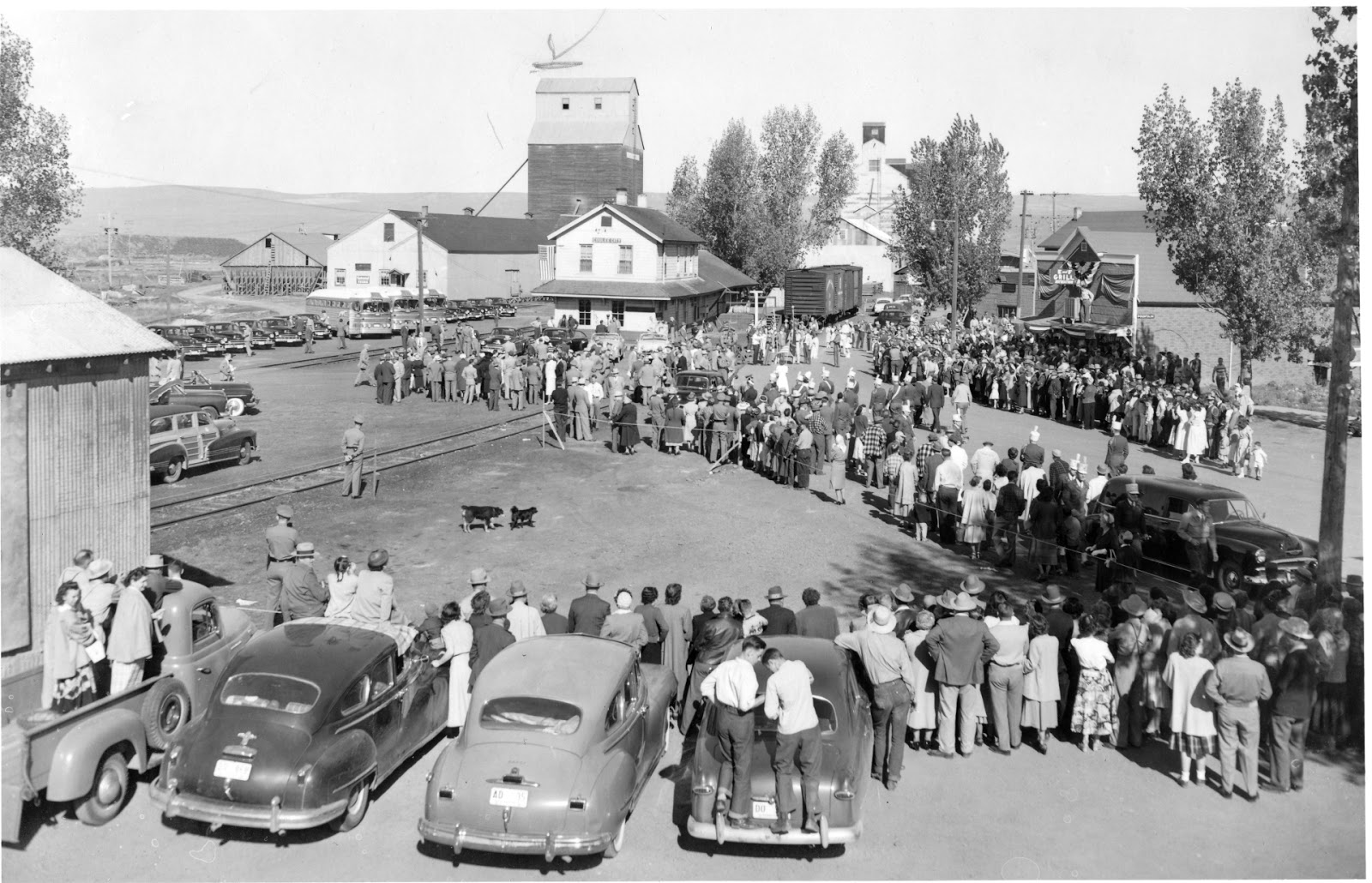 With great fanfare, President Harry Truman visited the Grand Coulee Dam site for, among other things, a dedication.
He arrived in Spokane at about 3 am, where his 14-car streamlined train was turned over by the Union Pacific to the Northern Pacific. From there it was parked at the Spokane depot, before departing for Coulee City at 4:30 am.
At 8:15 am, the train arrived at Coulee City, where a crowd of about 1200 people were waiting for him. The American Legion drum and bugle corps from Wenatchee played as the train rolled to a stop. He had not planned to speak there, but responded to Senator Warren Magnuson’s appeal to talk.
“We are going to Coulee Dam this morning to discuss many things and explain many things we think people ought to know. We will explain why some people don’t want the CVA (Columbia Valley Authority). I think the people do want it.”
He then told a humorous story.
“I have told this story in about every town in which I have stopped, so I guess it is good here.”
The story concerned early days when stage coaches met incoming trains. He said one fellow complained that the stage coach from Bridgeport never met the train at Coulee City nor did the Coulee City train make connections with the stage coach. The men found out later that the Coulee City hotel men had made a deal with the stage driver and the railroad engineer to cause more hotel rooms to be booked in town.
A homemade cake, a replica of the South Dam, was presented to the President by the Coulee City Chamber of Commerce.
From there the President was part of a 21-car caravan that drove up the Grand Coulee.
Once at the Mead circle, near the dam, he dedicated the dam and the Franklin D. Roosevelt Lake behind the dam to the late President Roosevelt. It was estimated that between 11,000 and 15,000 people were at the dedication.
Truman was then given a special tour of the dam, where he was shown the generating plants that had produced the electricity; these plants helped build the atomic bomb and other weapons used during the recent war.
Then the entire group traveled to the other side of the dam where many VIPs were present, including Washington Governor Arthur B. Langlie, manager of the Columbia Basin Project Frank Banks, and former Washington Governor Clarence Martin.
After speaking there, the 21-car caravan then left with the President for Wilbur, where they would rejoin the train for the trip back to Spokane.
The plaque stands today, along with a bust of President Roosevelt, as a memory to the dam and the event that day. 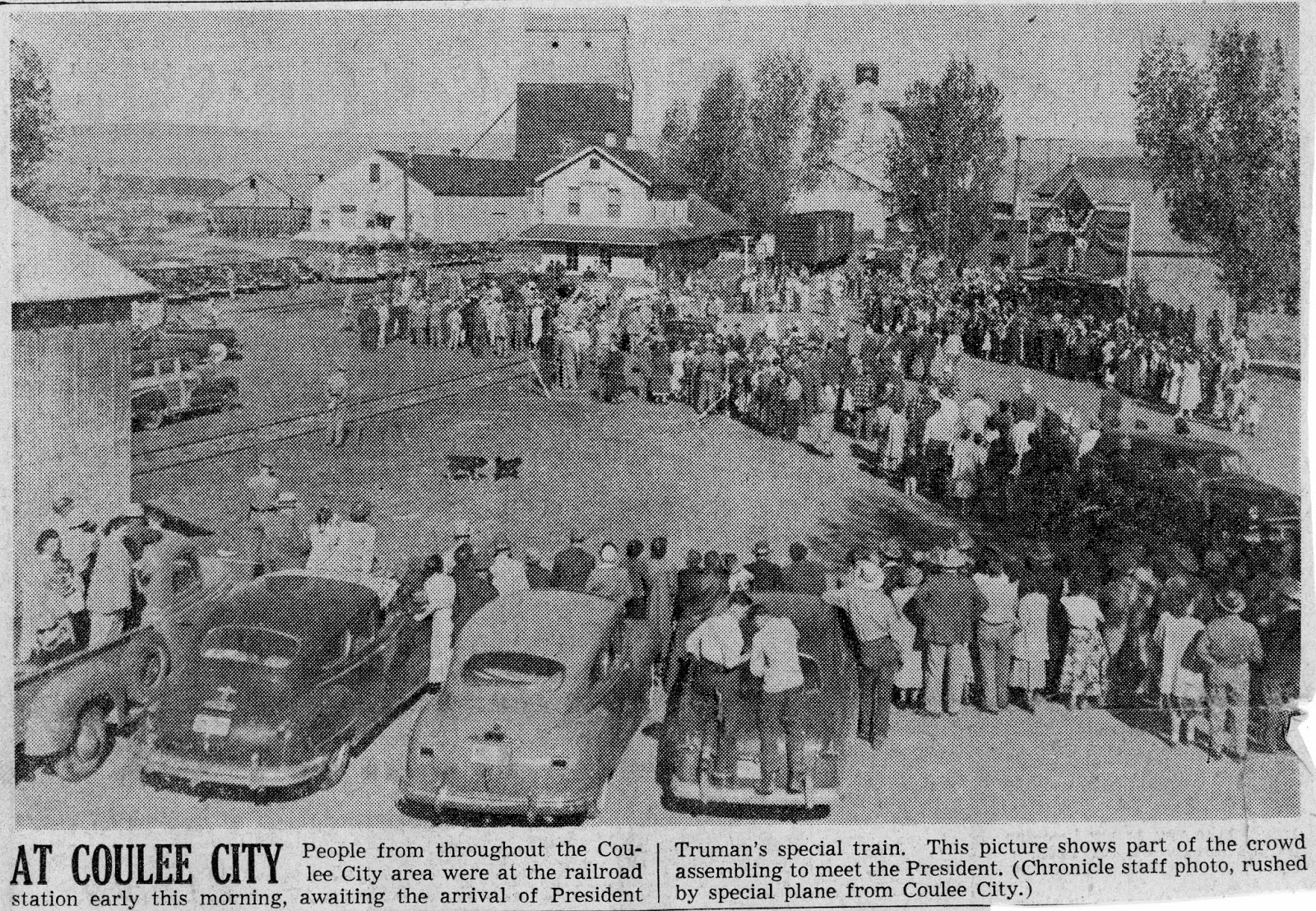 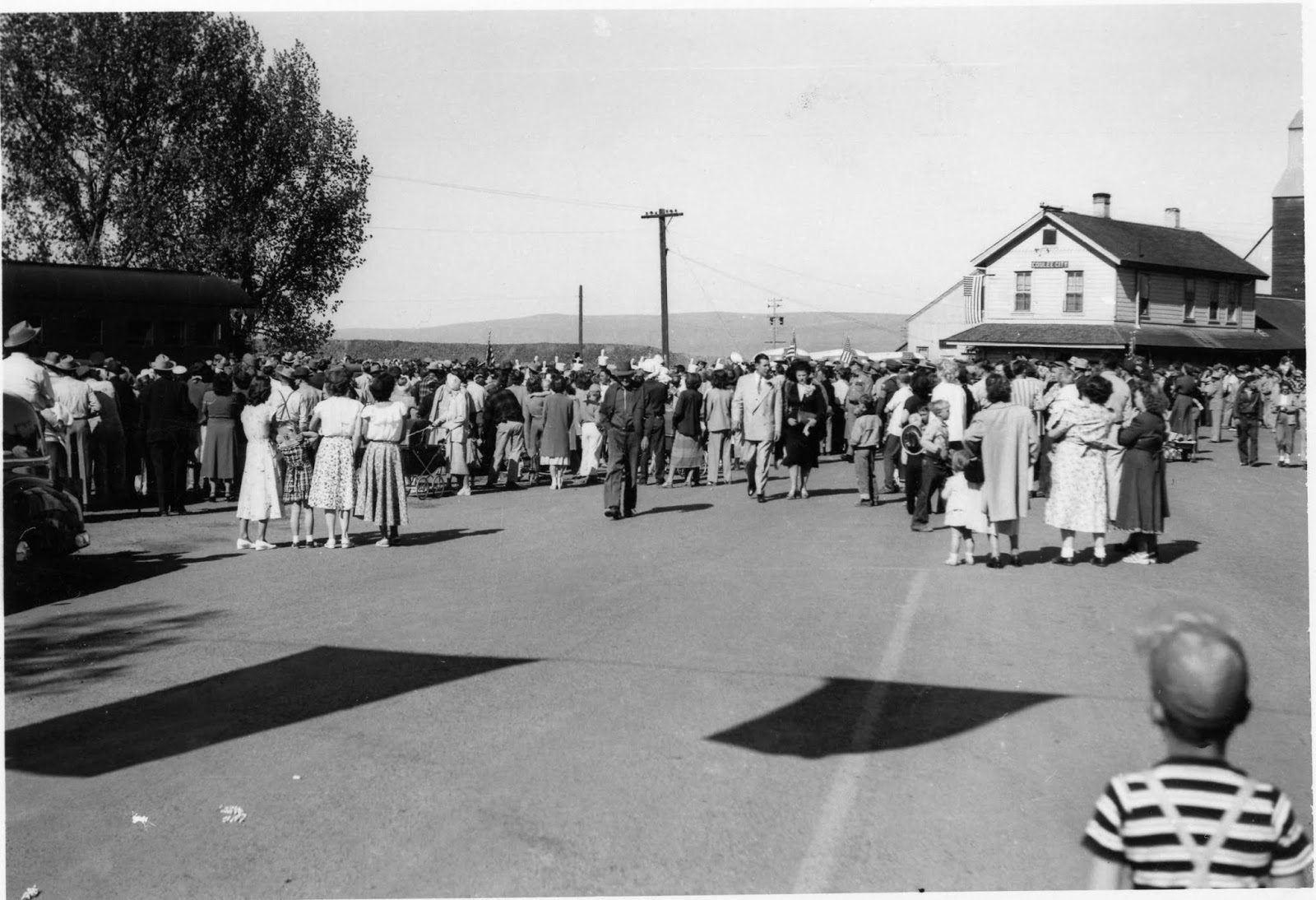 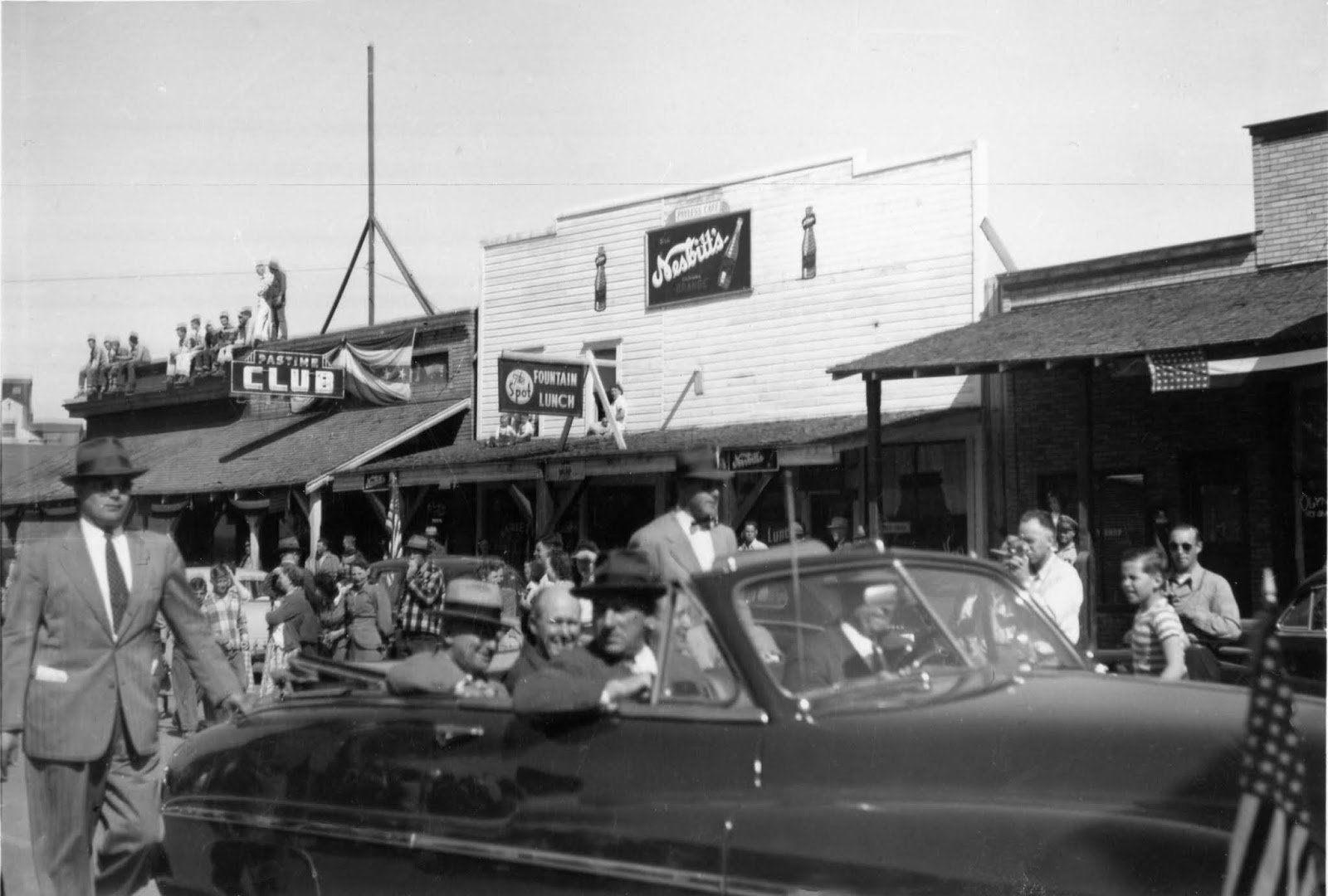 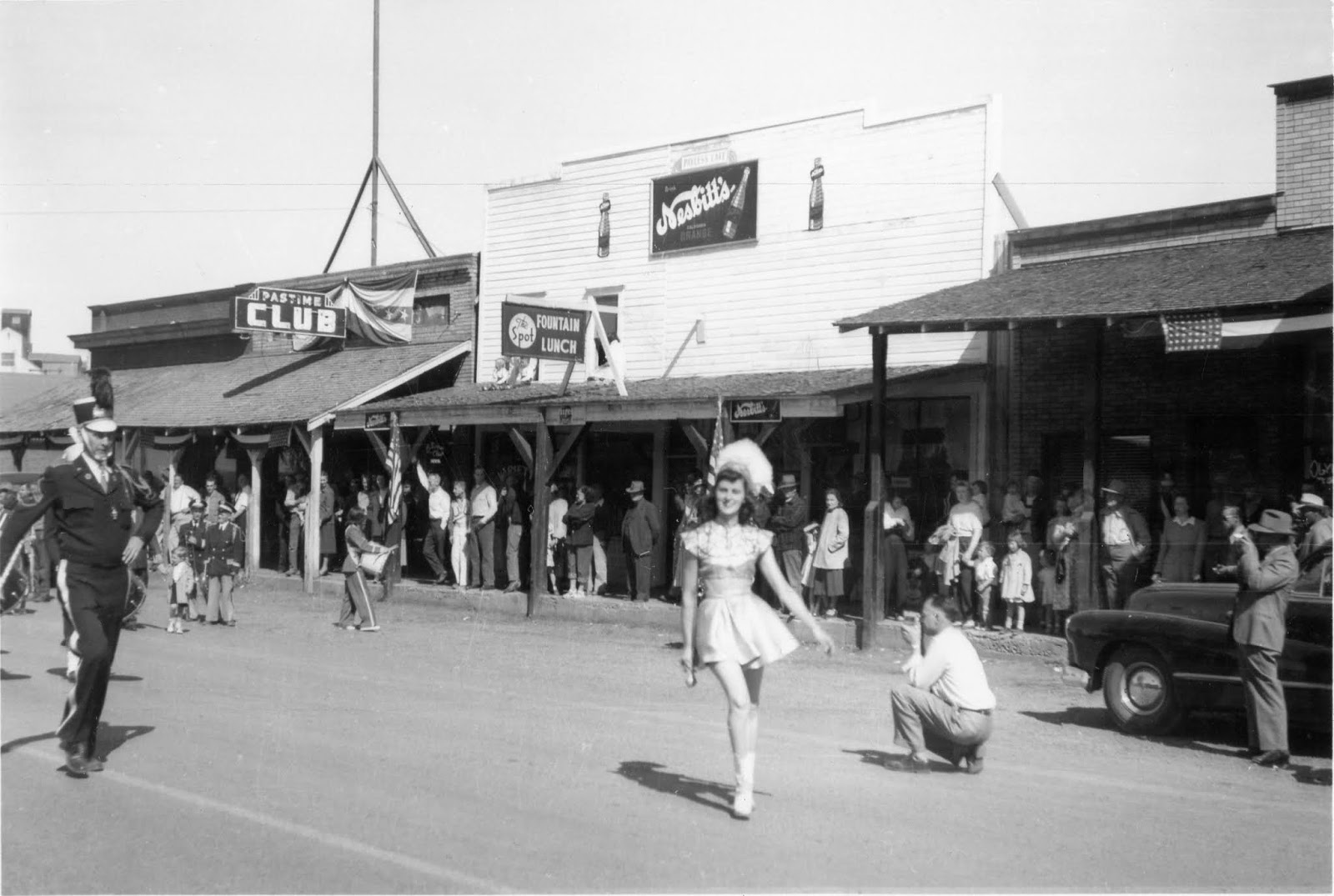 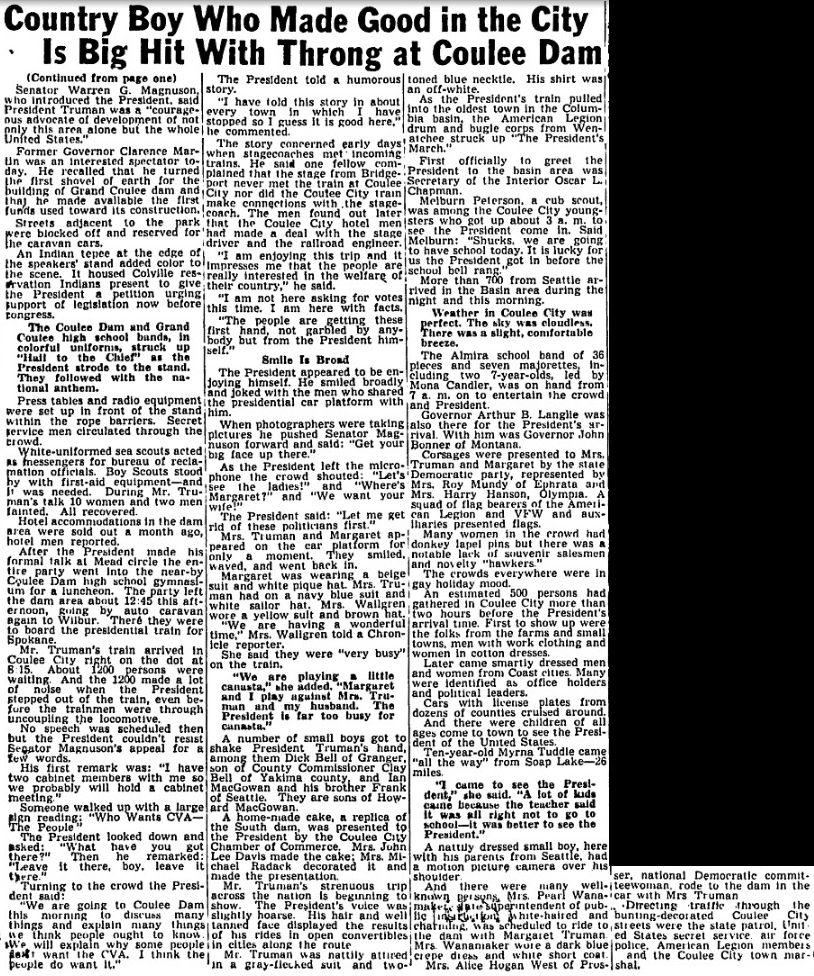 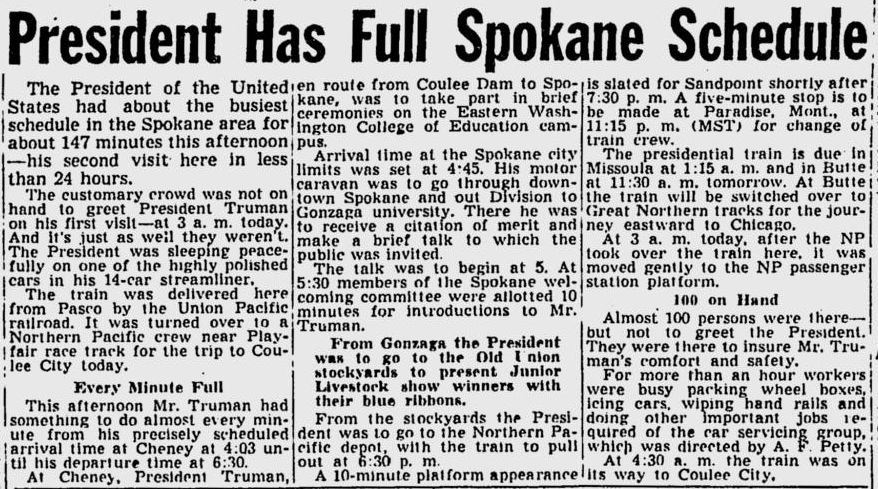 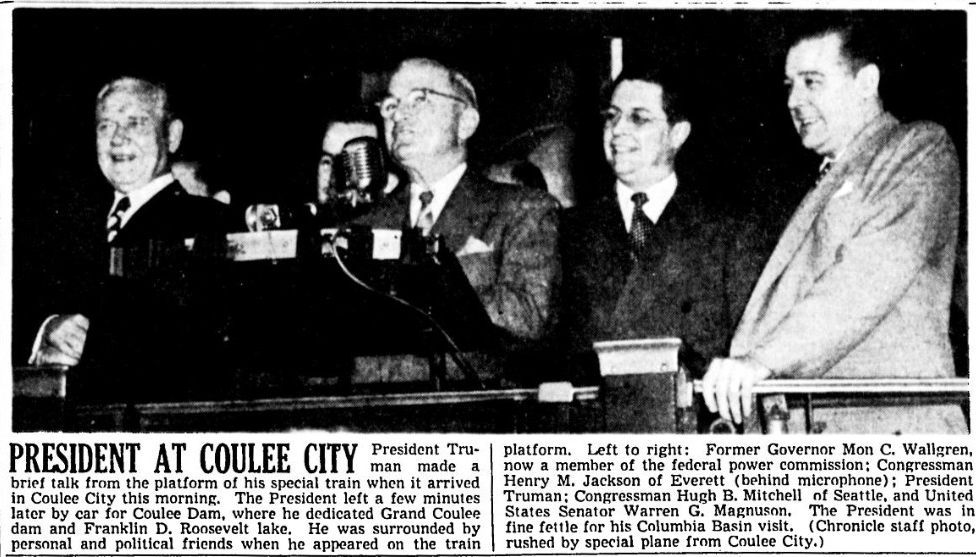 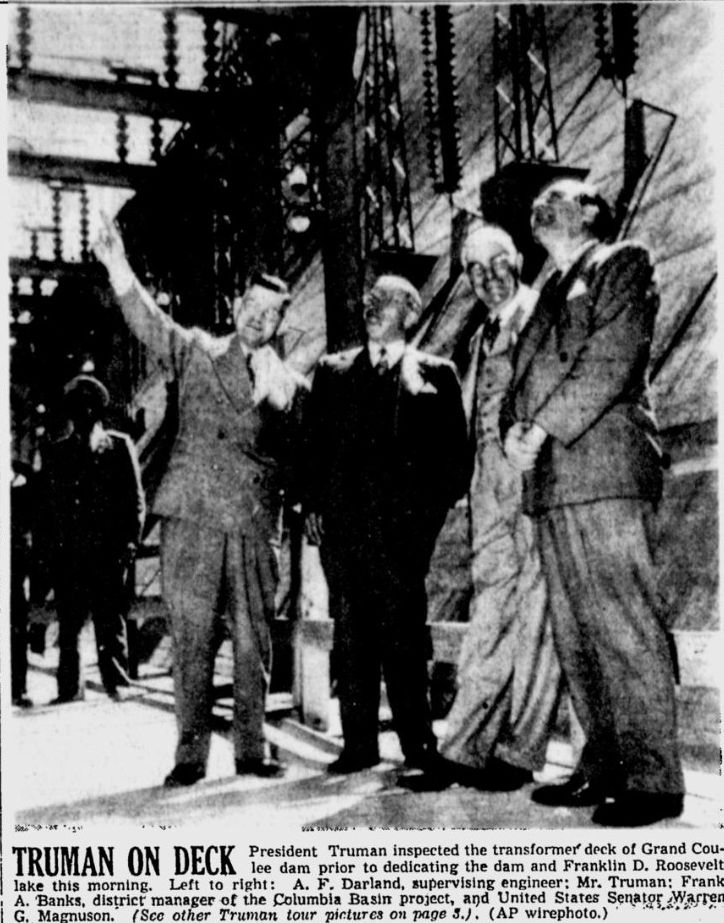 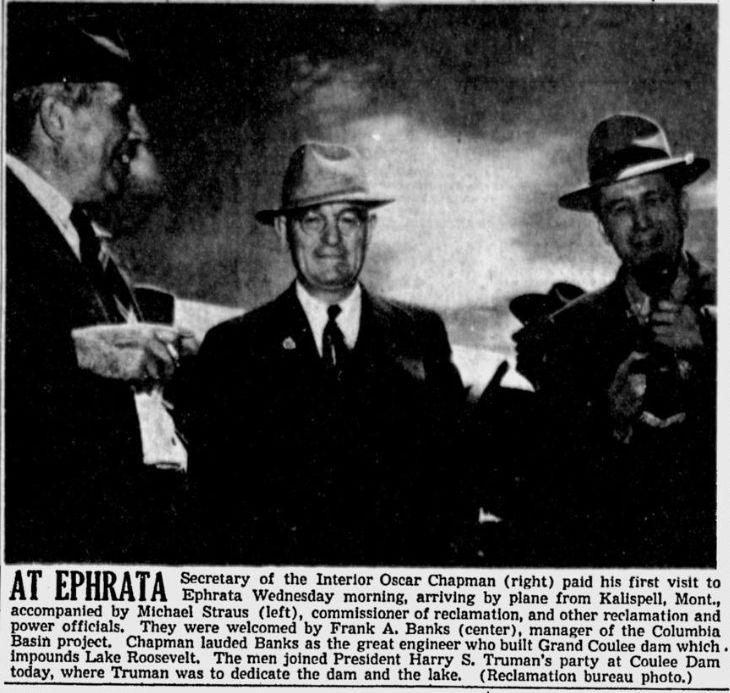 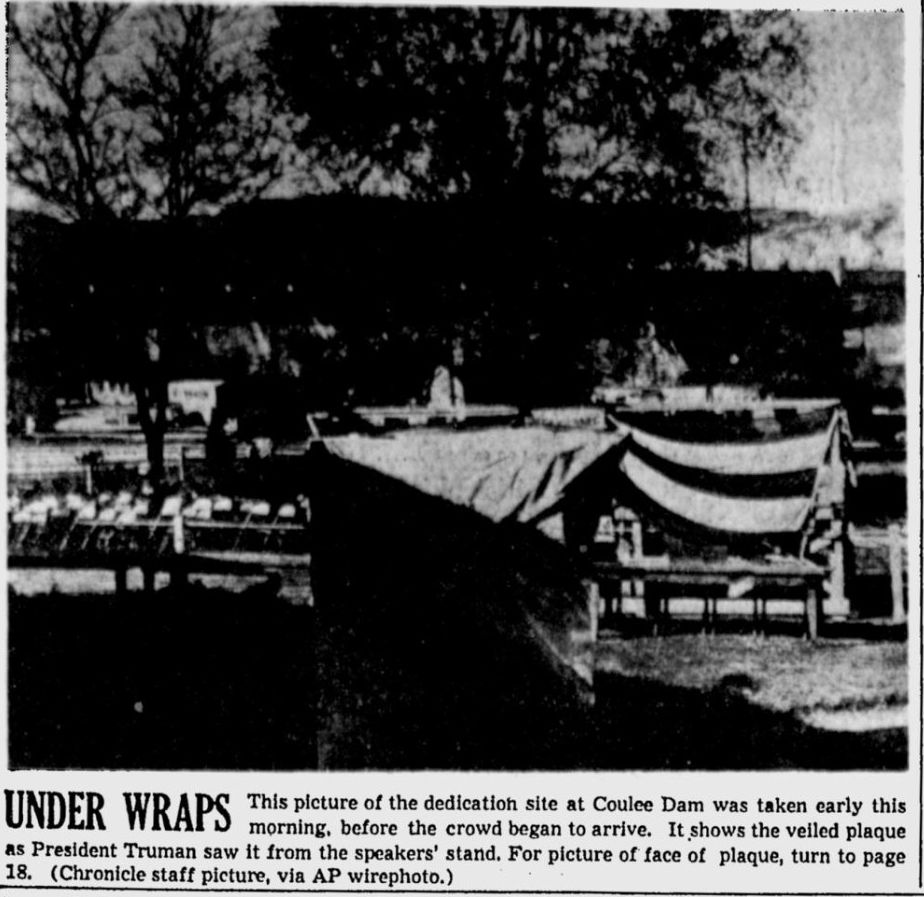 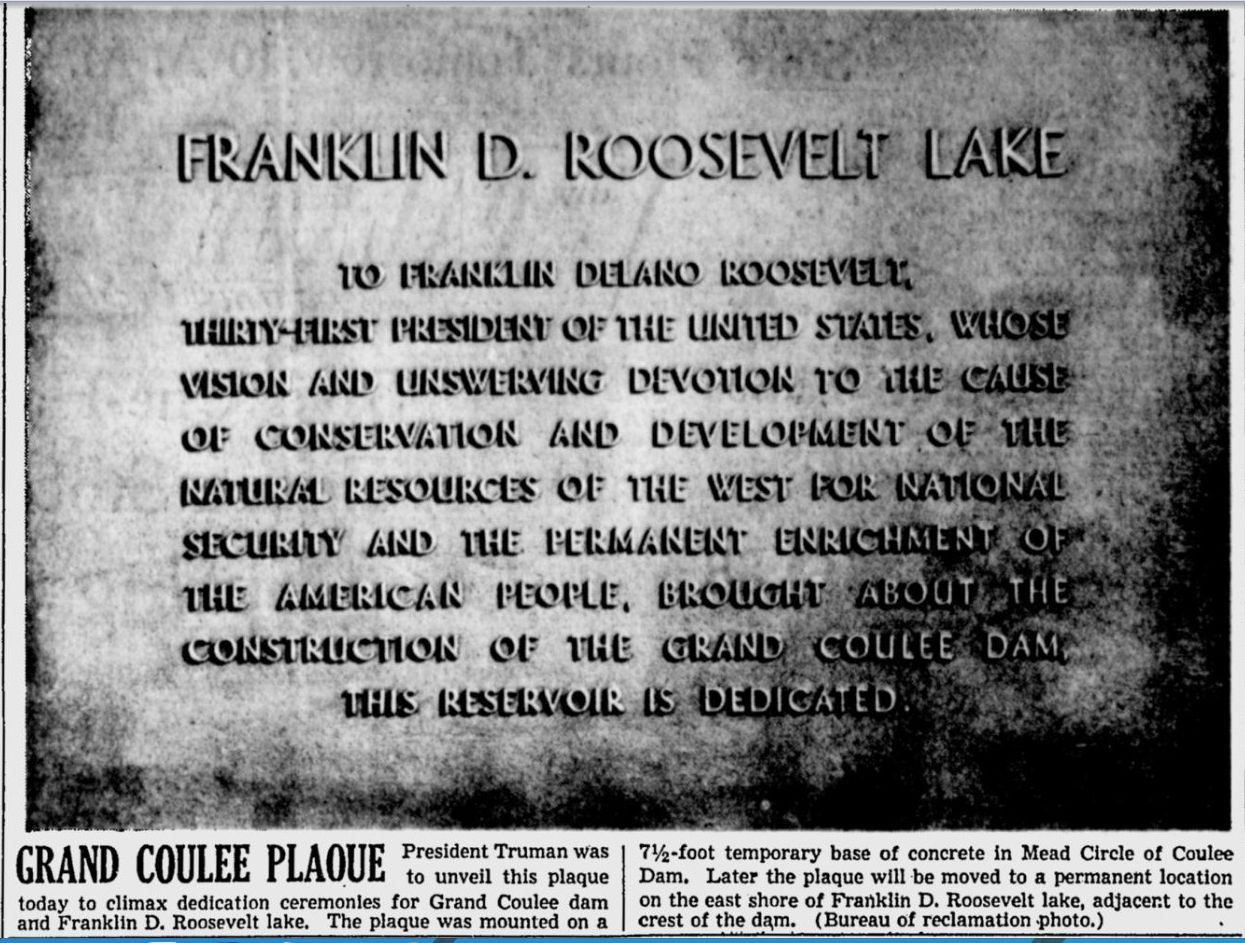 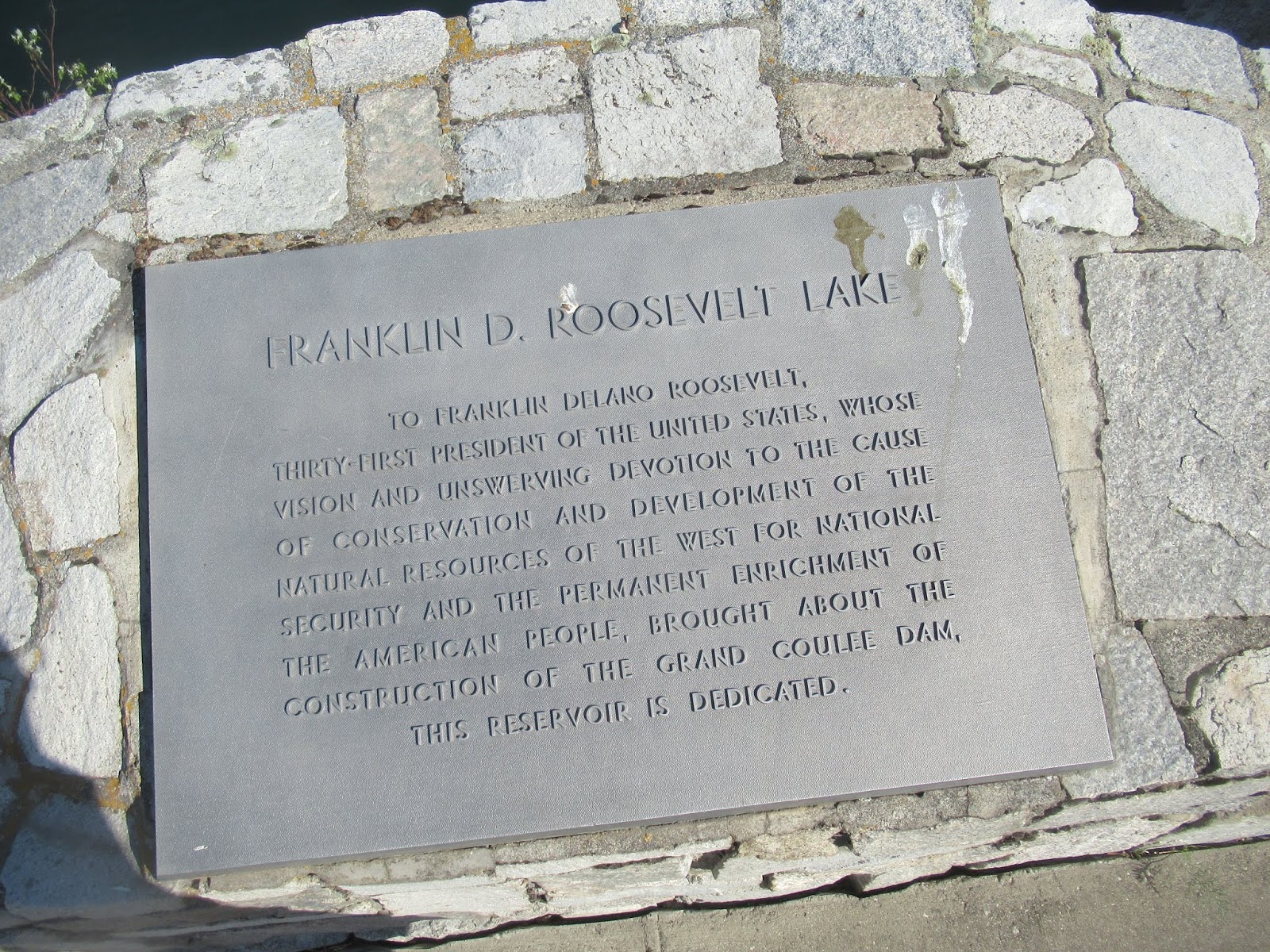 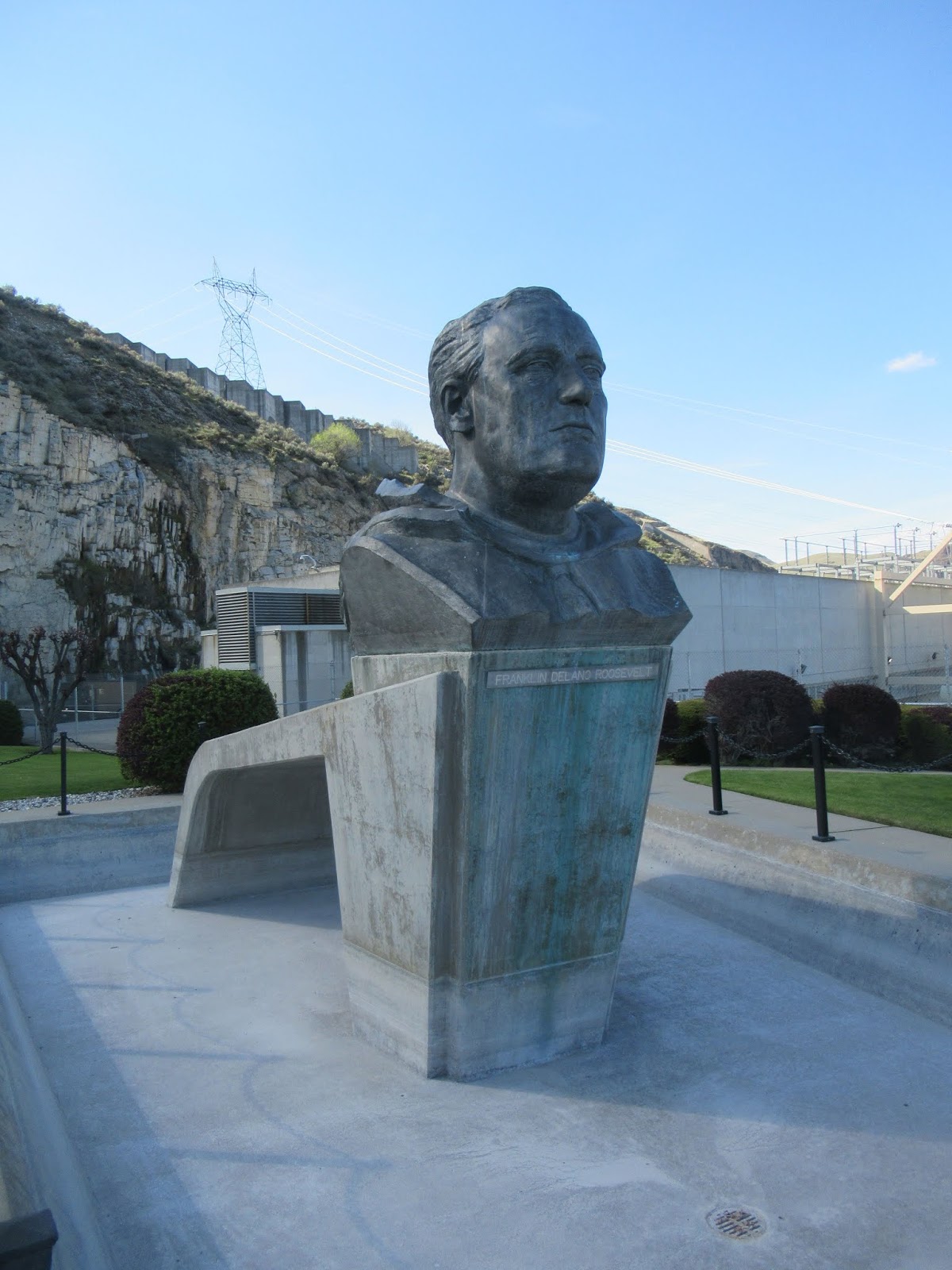 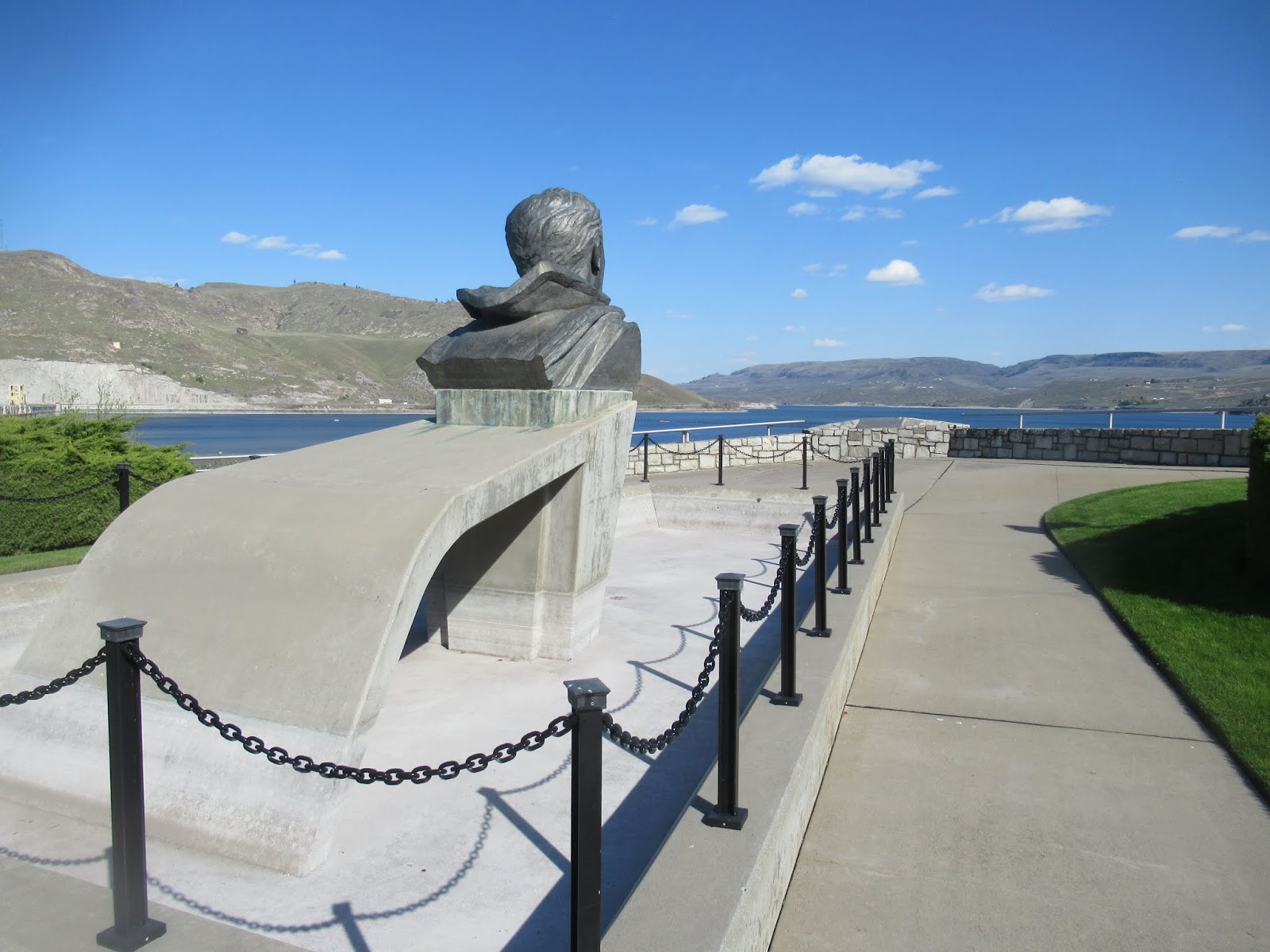 Photo of a recent parade showing same buildings as in 1950: (from Google Maps)
https://goo.gl/maps/MasBC69TP9xbP6rK8

Great pic! I know the folks in the photo, and I was down the street from this scene during the same parade.