Queen Of The Columbia

Latest article I wrote/rewrote for Them Dam Writers.

As in the early days of the west, when pioneer railroads were spanning the continent with ribbons of steel, two ribbons were going to connect the Grand Coulee dam site with the rest of the world.

The year was 1934, deep during the Depression. Jobs were scarce around the nation. This wasn’t necessarily how it was in Central Washington though. The building of Grand Coulee Dam was just starting, bringing near boom-times to the area.

The building of the construction railroad to the dam site was seen as a milepost in the overall project. Now materials could be delivered in large quantities, allowing the project to really jump to life and allowing thousands to be employed.

As the railroad was taking shape, an idea sprouted by Martin Shirk of the American Legion post at Grand Coulee in early November. Why not invite neighboring towns to a beauty competition, with the crowning achievement being the winner’s help in driving the final spike into the tracks? The Queen of the Columbia contest was born.

The Spokane Daily Chronicle was asked by Shirk to aid in organizing the contest. The Chronicle felt its readers would be interested in a cooperative effort that would likely help to bind the people of the region more closely together in those trying times.

Area Chambers of Commerce and Commercial Clubs were asked to sponsor the local contests and to help furnish the winners with transportation to and from the celebration. A banquet and dance were planned, both sponsored by the Legion post. The post also suggested a committee comprised of one artist, one sculptor and one person fully experienced in the selection of mannequins; these were to be appointed by the Chronicle to help crown the Queen.

The contest quickly proved to be popular. Dr. Hale Kimble, chairman of the special Coulee Princess Committee, forwarded invitations to Grand Coulee, Grand Coulee Center, Osborne, Grand Coulee Heights and Mason City, asking them to send their contestants to Spokane for two days of entertainment. Many other contestants came as well and were feted with two days worth of activities which included a parade through downtown to the Civic building, a visit to the Crescent store, a visit to Grayson's store, a tour of  the Manitou greenhouses to see huge mums then in bloom, a dinner dance in the Italian Gardens of the Davenport hotel, a party at the Fox theater, radio presentations over KHQ and KFPY, an airplane tour of Spokane out of Felts Field courtesy of United Air Lines, a luncheon at the Roundup room at the Dessert Hotel,  a tour of the John W. Graham store, a visit to the new Joyner store, and then ice skating at the Ice Arena.

The contestants were taken to Mason City where they became guest of MWAK for lunch in the new mess hall building. After lunch they moved to the new Roosevelt theater for the speaking and selection of the queen. The theater was packed with more than 1000 people there to see the dignitaries, including pioneers of Grant County who could remember the railroad war of 1889 that took place just west of Coulee City, between the Northern Pacific and the Seattle, Lake Shore & Eastern railroads.

The girls were observed in street costumes and bathing suits. The judges were James L. Paine chairman of the Crescent store, Archibald Rigg, artist and architect, and James Lyons, owner and manager of the Granada theater, all of Spokane, who were “experts in the art of judging beautiful women.” A band from Grant County furnished music.

Miss Louise Turner of Harrington was crowned “Queen of the Columbia.” She was given a gold bracelet as a memento of the celebration. Second place went to Mildred Smith of Wilbur and third to Lorraine Morgan of Grand Coulee Center. Mr. Ryan was crowned “King of the Rails” and was presented with a royal robe and a crown decorated with four golden spikes.

After all the speeches, the entire crowd moved out of the theater and marched about 100 yards to the railroad track. Once there, a huge crane lifted the one remaining rail into place. Frank Banks took the first swing with the maul at the golden spike, followed by Governor Martin, Senator Dill, Mr. Ryan, Cheney Cowles of Spokane, and members of the royal party. As the spike was finally seated, steam whistles broke loose and the crowd erupted into applause; the golden spike was driven home and the railroad was complete.

Apparently the girls in the contest had the time of their lives. Miss Turner blushed when Governor Martin, after pinning her with the emblem of her victory, gave her a very large kiss on her lips.

There were roars of laughter when Martin suggested he hoped to return when the “railroad looks more like a railroad.” His statement referenced the fact the road had not yet been ballasted and that the ties and the rails were still lying on the ground in many places.

A short time later Miss Turner was allowed to run the ancient steam engine that Ryan was using to build the railroad, which was not quite a fitting honor for the newly minted queen.

The construction railroad went on to haul enormous quantities of material needed in the building of the dam. The line was removed in 1951, with most of the grade now submerged beneath the waters of Banks Lake.

Announcement as seen in the Spokane “Chronicle.” 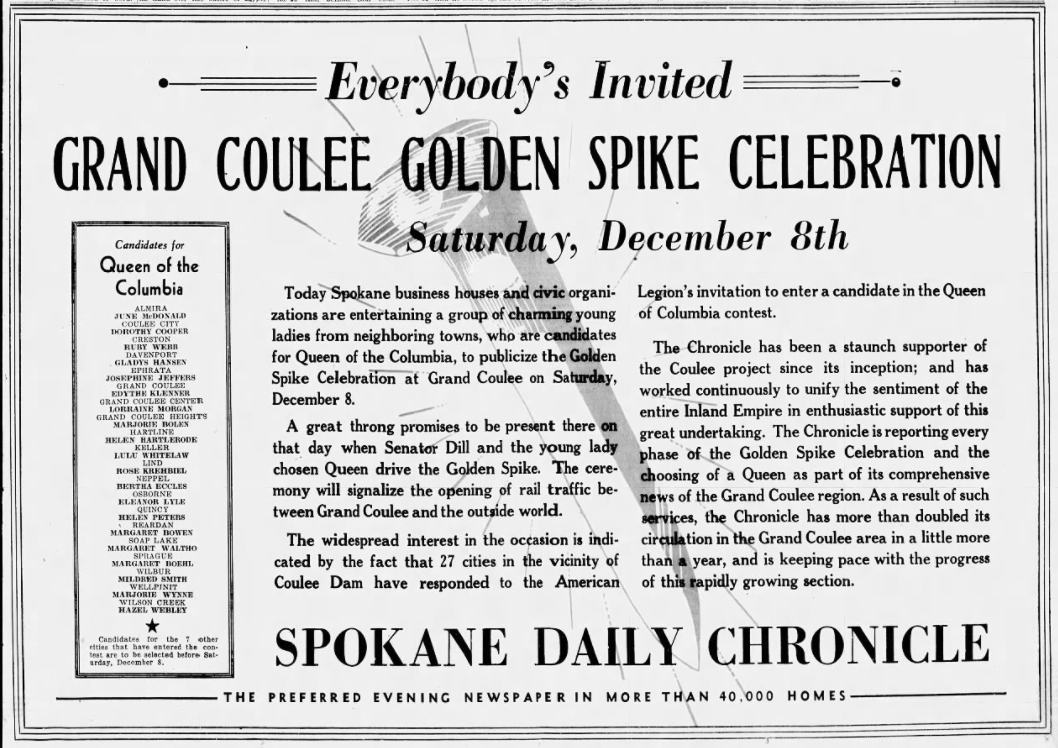 Golden spike superimposed over a map of the Columbia Basin Project. 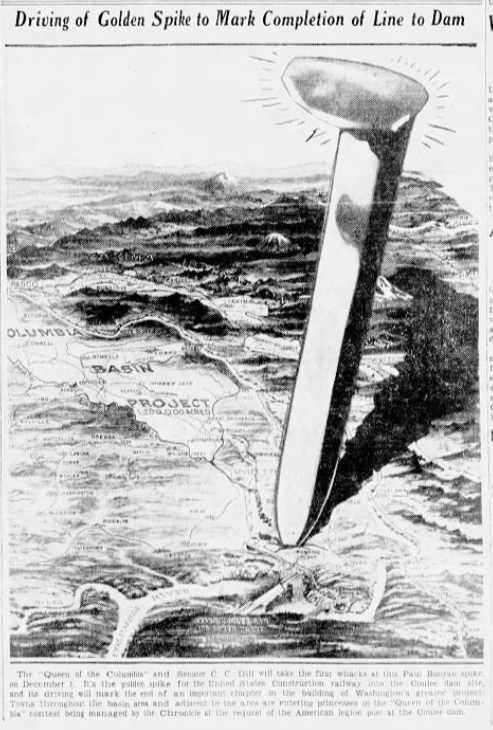 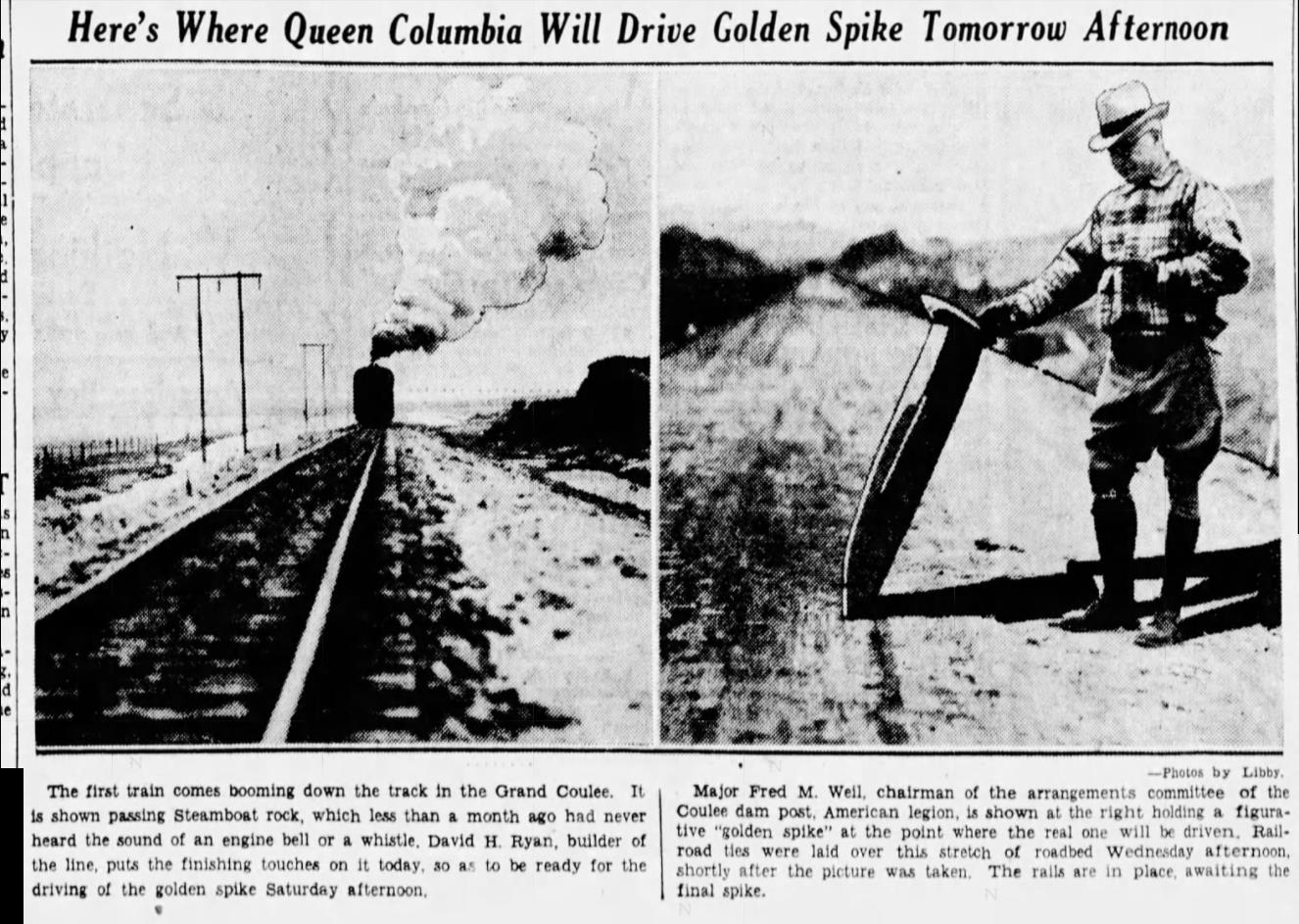 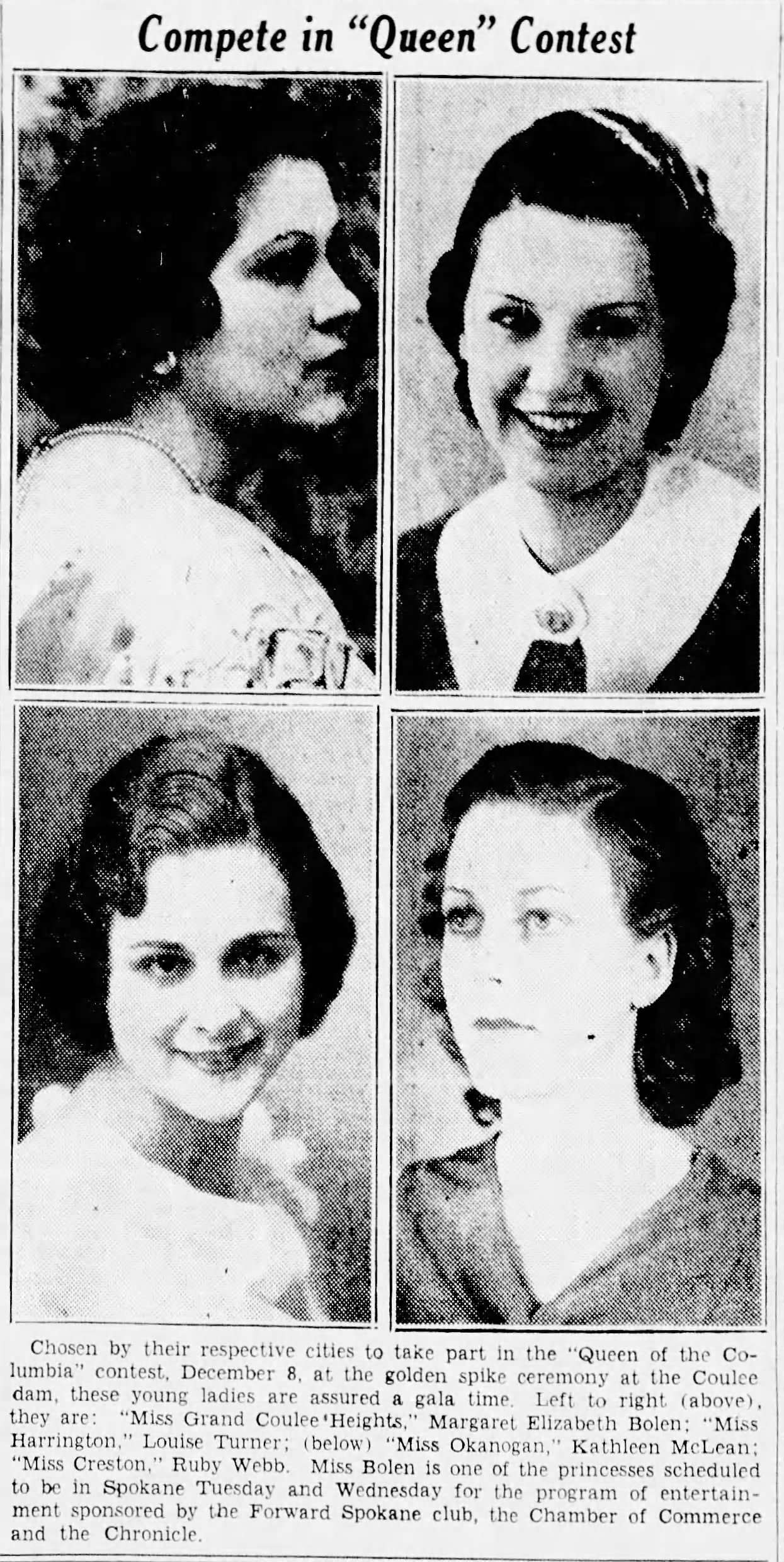 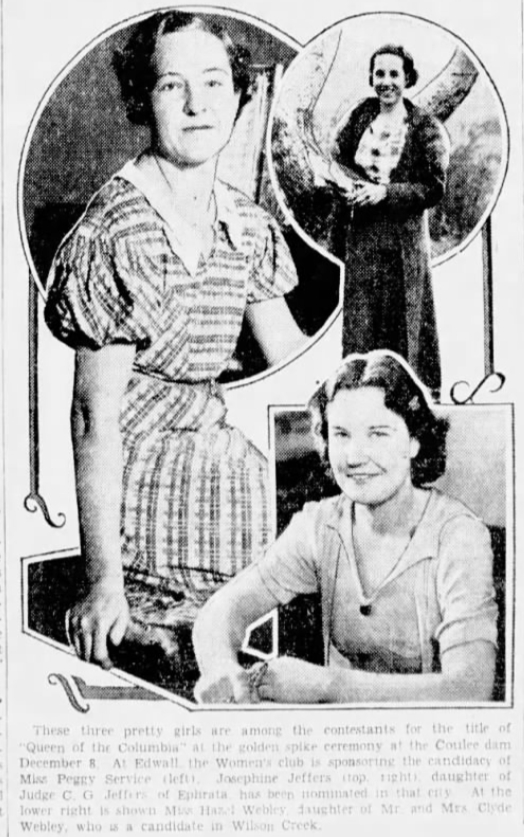 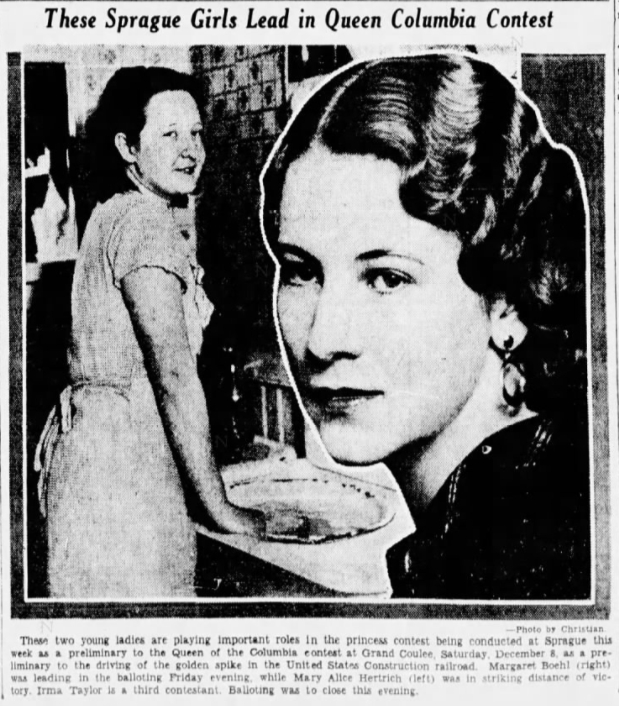 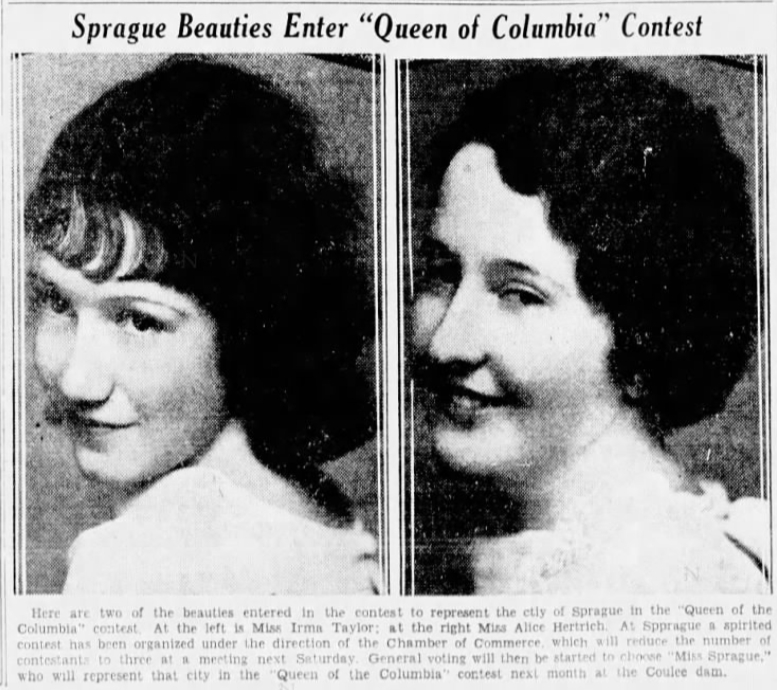 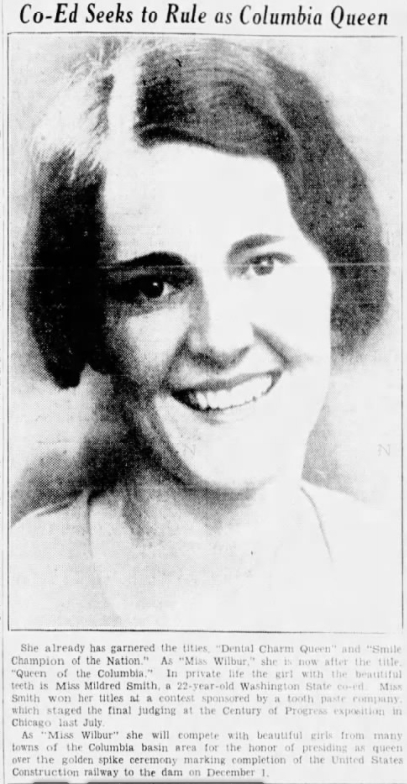 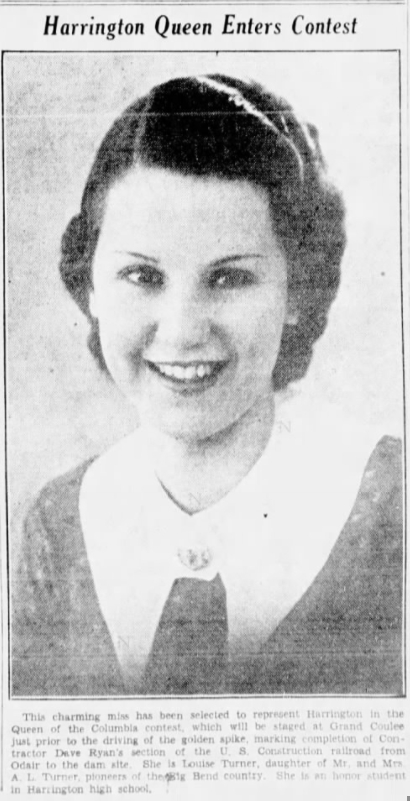 “Miss Davenport” Gladys Hansen, and a report about the wrong lady being pictured with the same name in a prior edition of the paper. 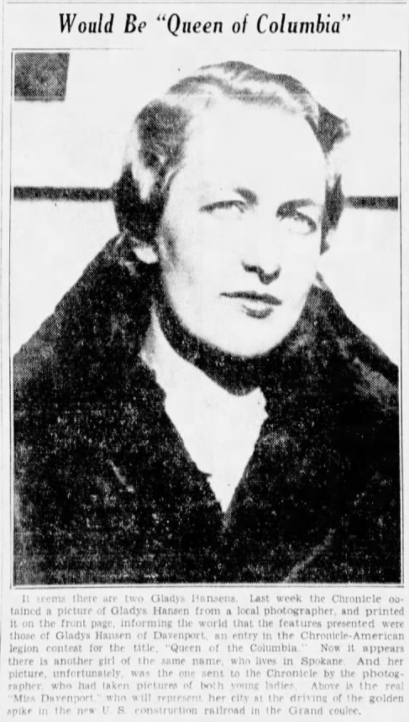 Contestants at a press event at the Davenport Hotel. 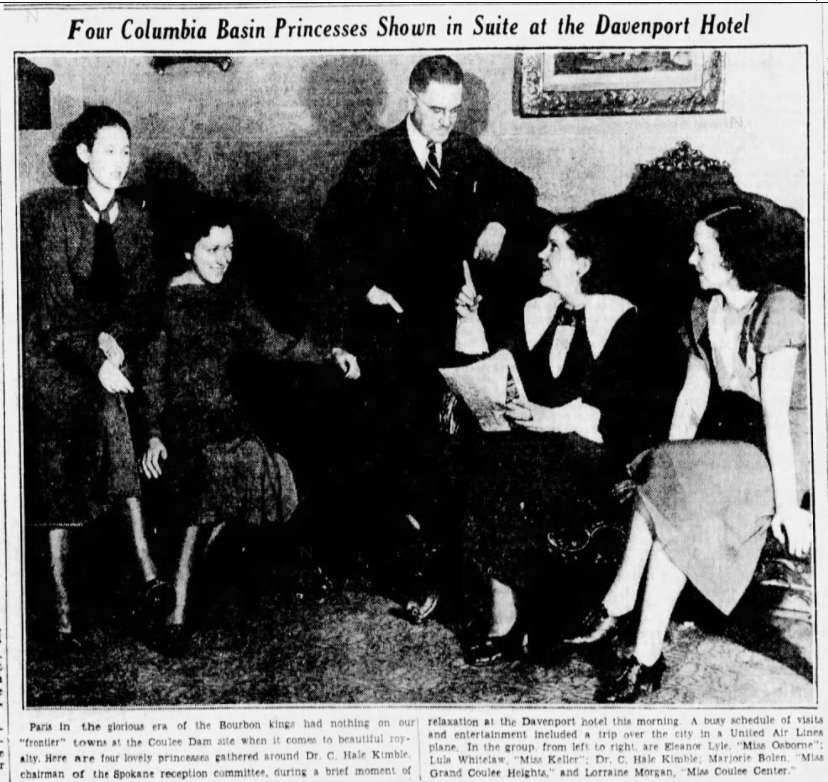 Another view of contestants at the press event at the Davenport Hotel. 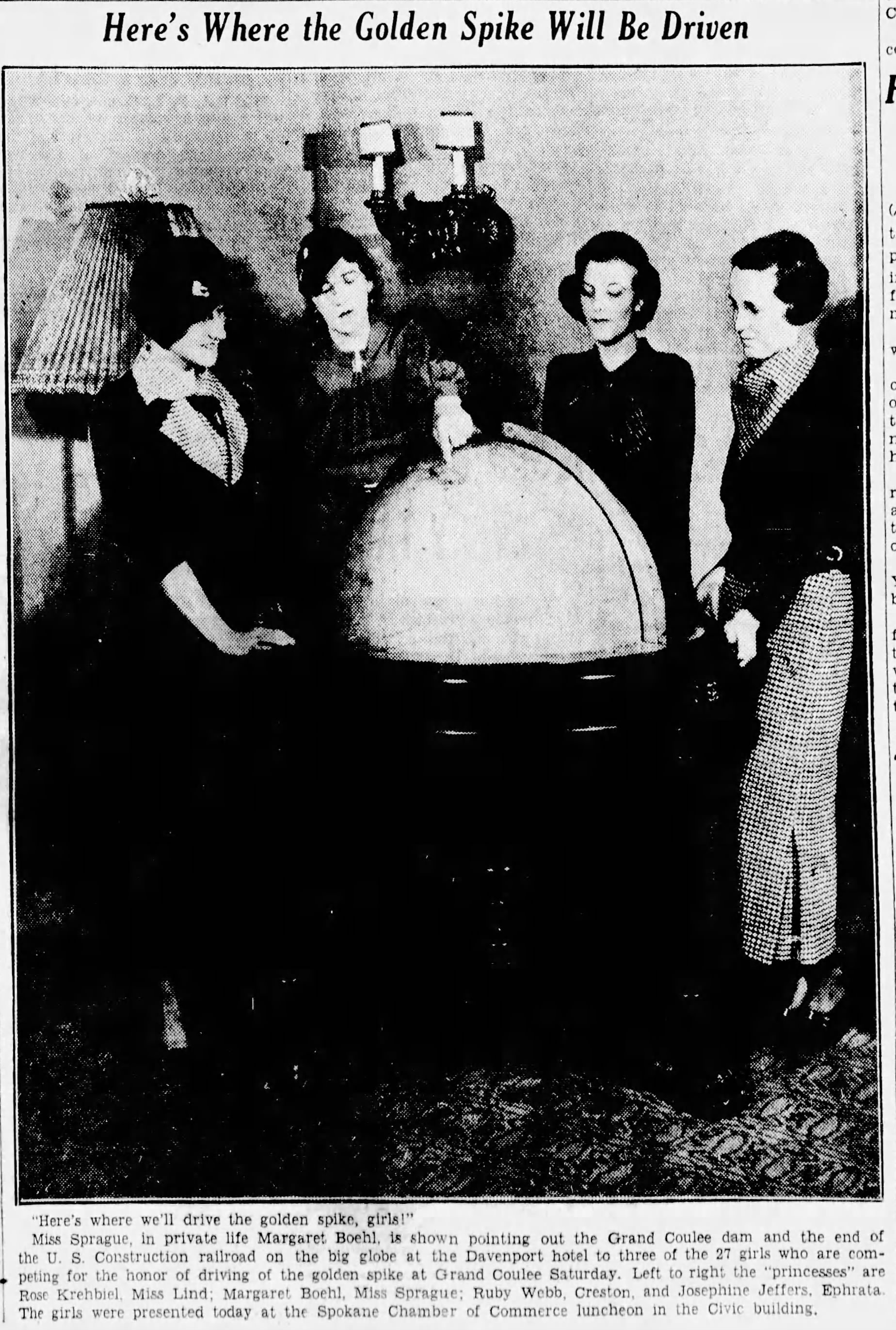 A third view of the contestants at the Davenport Hotel press event. 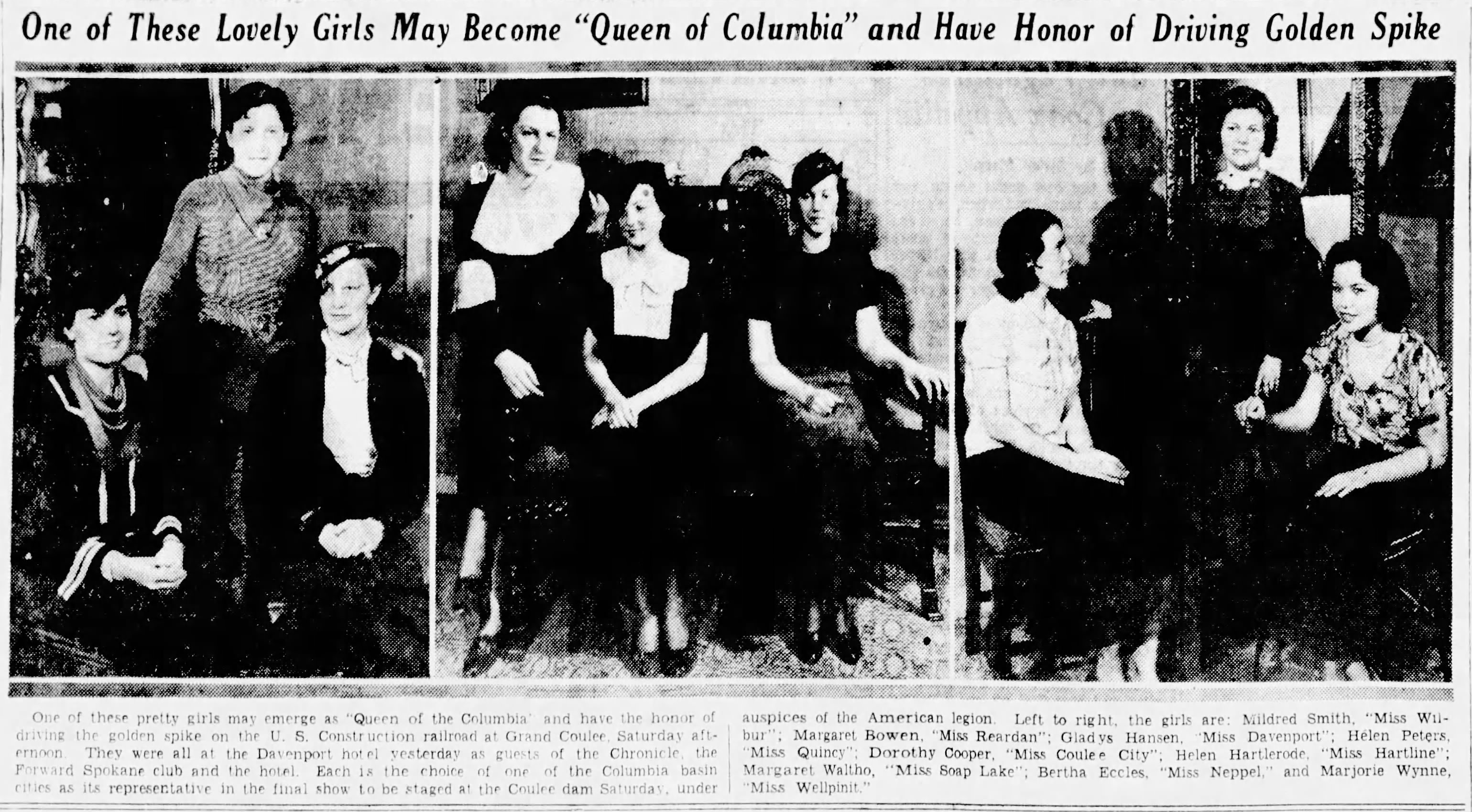 Contestants at lunch at Mason City. Unfortunately, not all are known.

“Miss Nespelem,'” whose name I could not find, along with Lou Turner. 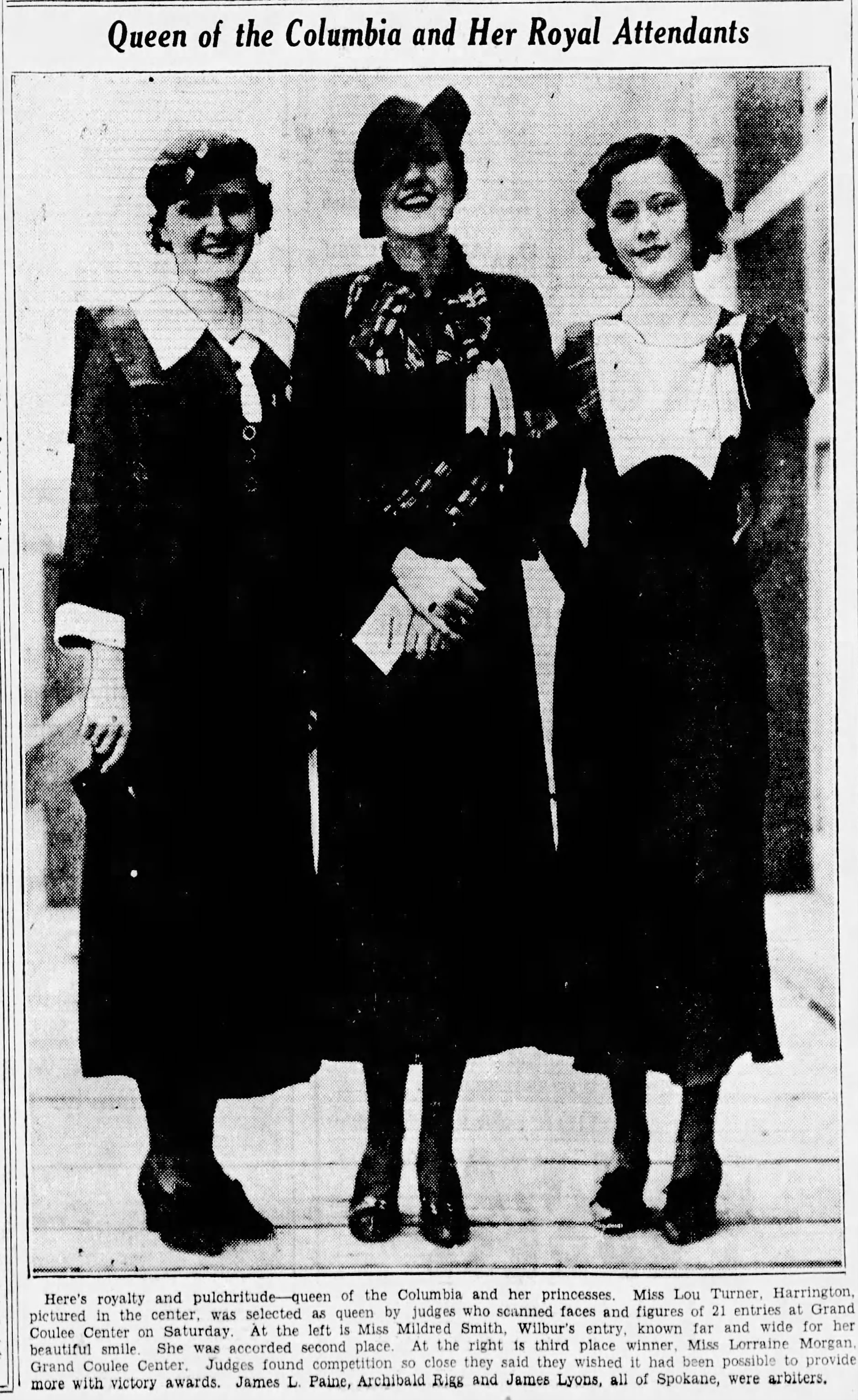 Queen of the Columbia Lou Turner with King of the Rails David Ryan. 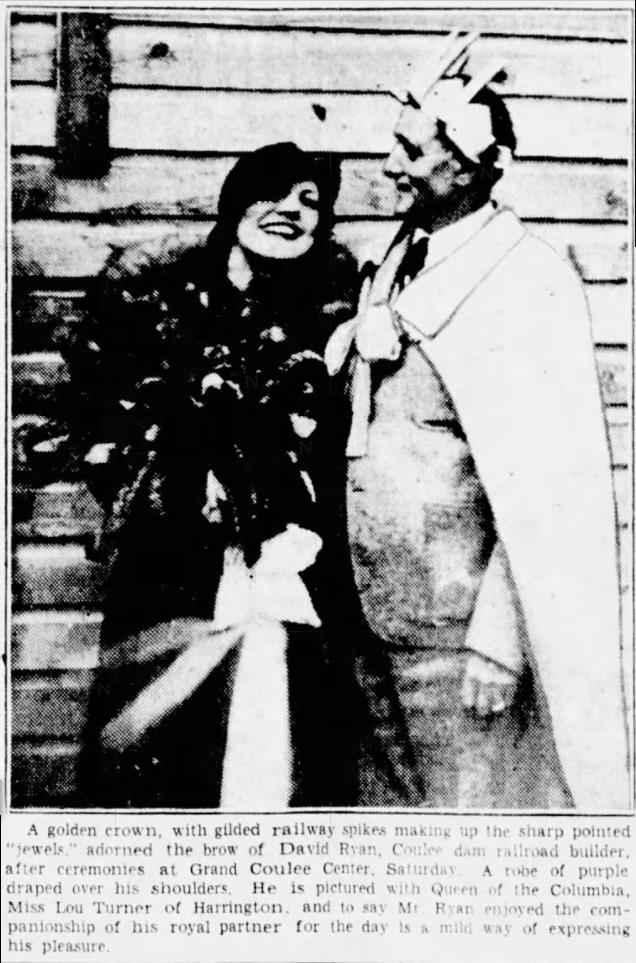 Driving the golden spike. Cheney Cowles of the Spokane “Chronicle” is wielding the spike hammer. Queen Lou Turner is the lady on the left, looking towards Cowles. In the center of all the faces is Gordon Shirk, the fellow who came up with idea of the pageant and ceremony.