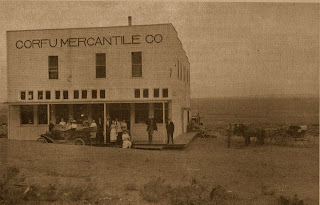 Allen says, "Corfu Mercantile Store, 1912. Frank Martin ran the store, he and his wife are standing alongside the 1911 Ford car. The woman sitting on the porch is Elsie Greenus, she was the Post-Mistress, Herman Gulberg is the man with his arm on the post to the right, he was a Milwaukee signal maintainer as well as Frank Martin's right hand man. The Wilsie sisters, Ruth and Esther, are in the photo, they own the two buckskin ponies hitched to the buckboard wagon."
Posted by SDP45 at 7:00 AM