From the "Seattle Post-Intelligencer." 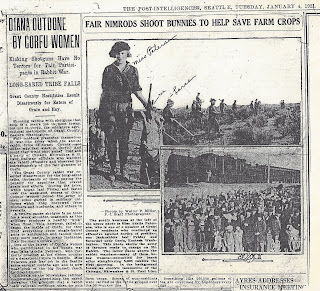 Allen says, "A newspaper article about the 1921 Rabbit Drive at Corfu. These drives, to rid the area of an over-population of Jack Rabbits, were held over the years at Ewan, Warden, nearby Soap Lake on the Great Northern and other farming communities in eastern Washington."