New Power On The WER

A lash-up unlikely to be duplicated again on the WER.  Yesterday's (4/28/2021) eastbound scoot train with FIVE units; all running and online.  I was the engineer on the HL28-2 crew with Conductor Kai Longre.  We got the train from the HL28-1 crew (Ted Curphey and Gary Durr) at Telford Rd, which is near MP 57.  Our final destination was the Highline Grain facility at Four Lakes WA, at MP 6.4.

We had 50+ miles to travel, most at 10 mph,  including a complex pick-up in Davenport, another easy pickup at Mondovi, and a couple of 5 mph slow orders.   As you may imagine, we had our challenges!  The only 20 mph track we encountered was at Geiger Jct, MP 7.9 which didn't do us much good.

Our consist after leaving Mondovi, where we picked up 10 loads:

74 loads, 6 empties, for a total of 80 cars.  The 6 empties were set-out at Elizabeth siding on the Geiger Spur and the 74 loads went to Highline Grain to be unloaded.

Not wishing to have this train "dog caught" (ie running out of time) we elected to do our work in the most expedient and simplest manner.  This resulted in all 5 units running and online.  The 3910 and 7348 were added on the point at Davenport.

The descent down Deep Creek hill was handled entirely with dynamic brakes in notch 4 or 5.  The climb up Deep Creek was easily achieved in throttle 4 or 5 and staying within the 10 mph speed limits allowed.  It was a full 12 hour shift but we got the train to Highline.  Garrett Wheeler, who was the Engineer unloading this train at Highline assisted us with the Geiger Spur setout and the back-up move into Highline.  His help was much appreciated.

We got the job done within the 12 hour time limit imposed by the hours-of-service law.  Am I grandstanding?  Perhaps a bit!  I was proud of the job Kai and I did for the railroad.

At Mondovi after making our 10 car pick-up. 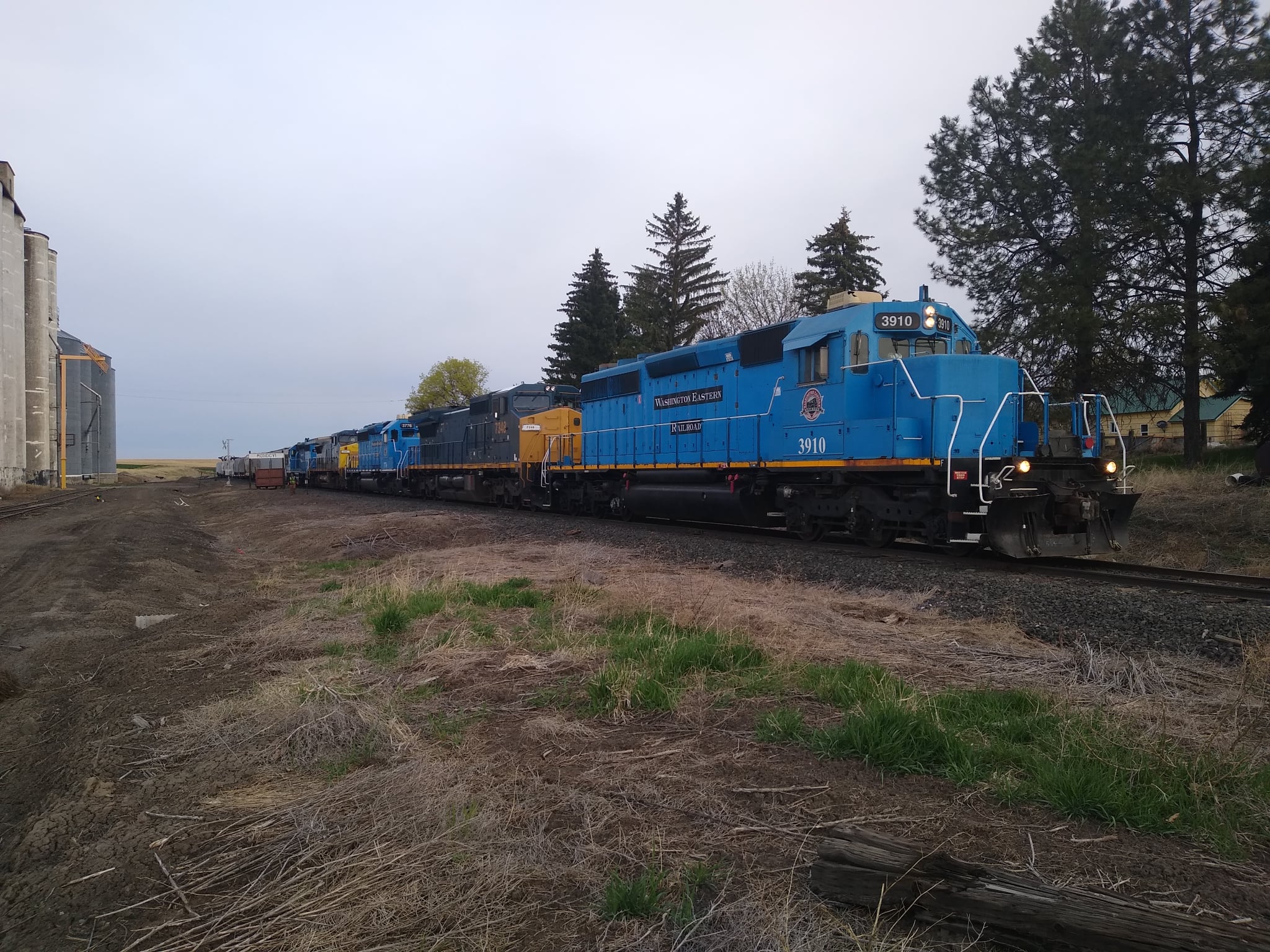 At Highline Grain in Four Lakes. Parked east of the unloading shed. 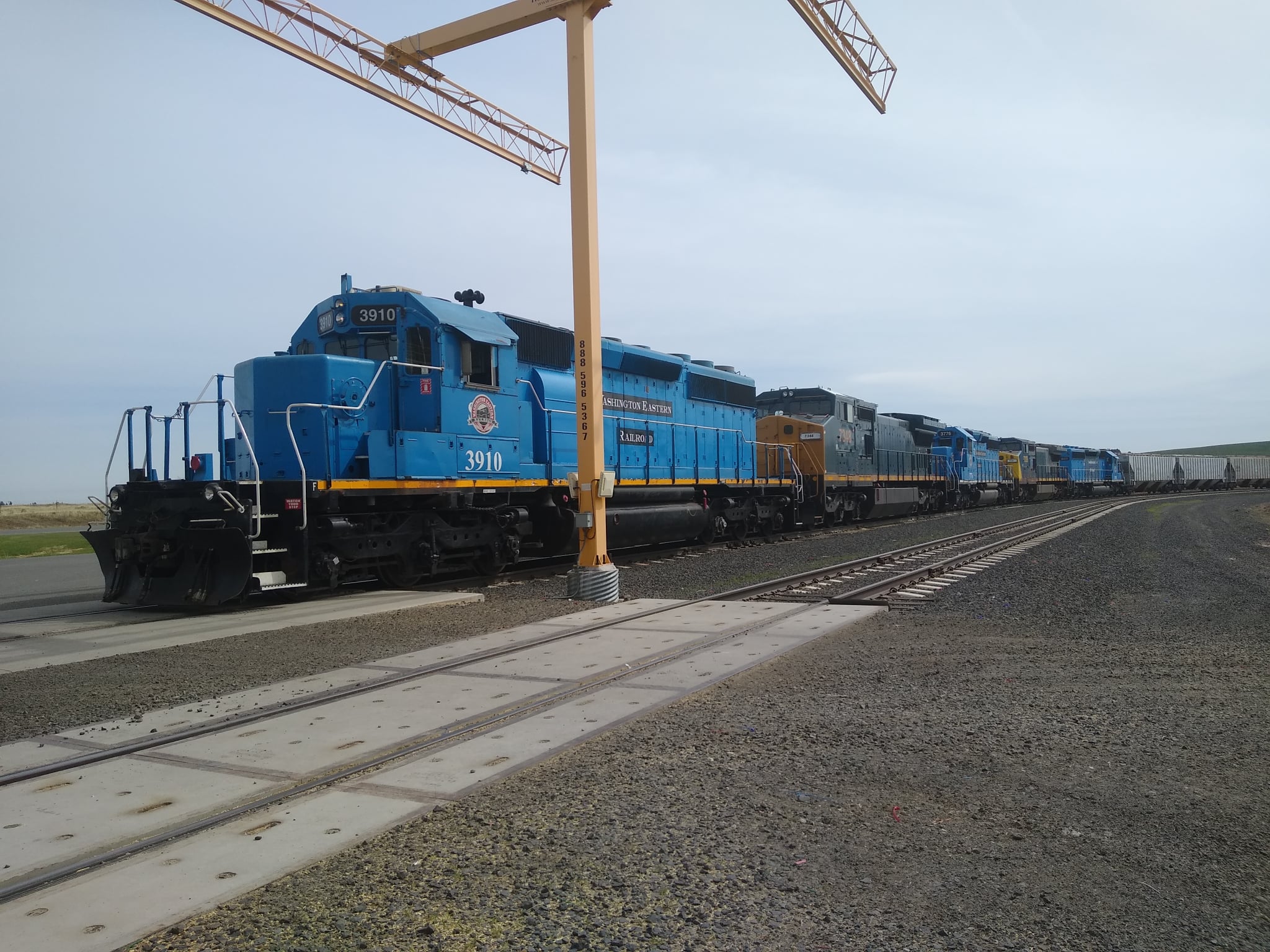 I try to offer good details. Most of our run was at night and Mondovi was the first opportunity to actually get any pictures. I was hoping some other fans might show up but no such luck. Nobody was at the INRM museum when we went by.

Many people do not understand what is involved in changing locomotive consists, and how much time it can take. You have to connect the walkways and their chains. Hook-up the MU cable which can be a P.I.T.A. if you are doing it yourself. Hook-up the 6 (3 on each side) pneumatic MU hoses - yes I know, theoretically you only need one side hooked up, but sometimes you will eliminate problems by hooking up both sides. Then there is the consist test to make sure all locomotive brakes work correctly. The headlight test to insure that the rear unit lights up for back-up moves. The throttle test to make sure all of them rev up and load.

In our case, the 3910 and the 7348 in Davenport were not connected together. So we had to put them together and then add them to the front of the 3776. Another consideration was that the 3588 was the only west facing unit in this consist, so it was desirable to have it on the rear.