An inclement November afternoon finds the sun burning a hole into the blanket of volatile, steel-woolen clouds as engineer Jory Langevin trundles west at 10 mph making a light engine move towards Hartline to pick up harvest loaded hoppers after descending the grade from Hanson moving from fill to cut to fill to cut again and again where descending crepuscular rays - Fingers of God - touch the earth as the souls that have poured out their lives across and into this vast and copious land may well be ascending Jacob’s ladder toward heaven. It is said that this particular portion of Promised Land was settled by a moiety of Calvinist Welsh. Fat and green home lands and hamlets left so very far behind them n’er to return, leaving with what little of their very modest possessions in hand, under arm, and on back, surely must have driven weary women to wail, and tired, homesick children to break out in tears of angst as they scanned across what appeared an endless, lifeless scape of desolation they had traveled an ocean and continent to arrive at, while the patriarchs rejoiced in having won and found freedom - salvation at last - from indentured servitude to fickle landowners and folly kings, irrespective of what that freedom looked like to their clan. Unwavering in their faith and its foundation of predestination, they, like John E. Williams, from Anglesey and his wife, Elizabeth, from Llanarmon, Cymru (Wales in Welsh meaning “Fellow Countrymen”) went about speaking and living their distinctive Welsh language and culture while rebuilding their lives working their land - not another’s - establishing new communities, and, of course, giving thanks to their savior in erecting the “Zion Welsh Calvinistic Church” and setting aside a plot, from whence this image made, where to say goodbye to the predestined who have gone ahead to the eternal kingdom, and John and Elizabeth now rest together in eternity under a headstone obscured by dead tumbleweeds. The century since has left the church razed and the cemetery unkept, nondescript, and insular within a wheat field on the corner of dirt roads 43-NE and U-NE a few miles east of Hartline along the CW, it and they but forgotten. 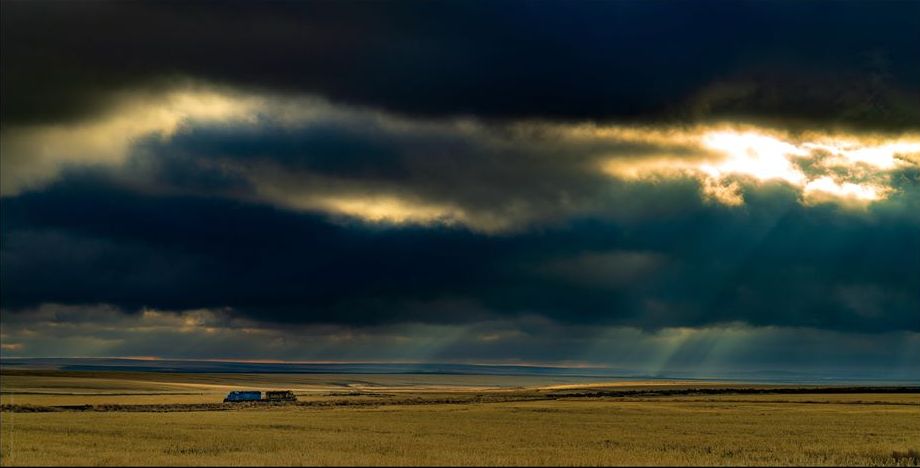