It is said “Man cannot live by bread alone,” yet he likewise cannot live without it – or a form thereof – either, thus grain and its unquenchable need. At hand: mercury rising – unabated. It’s half past midday, the ambient temperature is rapidly coming to a boil under an unforgiving sun ablaze as she easily bends the flaccid line between double and triple digit Fahrenheit with her unflinching glare. The whine of EMD’s in dynamics is unmistakable as Engineer Jerry Miller brings his train with four motors and 22 loads to a stop on the main while the conductor considers the pending pickup of eleven – loaded earlier in the lesser heat of the day – covered hoppers from Central Washington Grain Growers’ spur. But bread is the furthest from the crew’s mind. Instead, hydration is focal: always close at hand as the steel of the right-of-way and rolling stock soak up the heat and radiate it like a furnace flame that burns your touch and sucks you dry in a parched heartbeat. Yet man and machine force themselves against this abominable convection belied by the quivering heat distortion that hampers distinct image and mental focus. Harvest is nearing fever pitch, and the hopper troughs have consumed copiously from the crib, corrugated, and concrete elevator umbilicals at the CWGG Almira Station and ready to head east for movement of their staple sustenance beyond this breadbasket hamlet. Claiming some 280 resident souls, once the only “dry city” in the Big Bend territory, and temporary terminus of the precedent Central Washington Railroad, it was prophesied in the Wilbur Register on July 26, 1889, “that [this] place may make a town in the future […] If you desire to learn of the ‘glorious future’ in store for the town just confer with ‘Tom’ Hodges, the resident town-site agent. He never tires of reciting it." Indeed, it became an oasis, but the mirage of a “glorious future” – in retrospect – was surely hyperbole, if not cooked hubris. 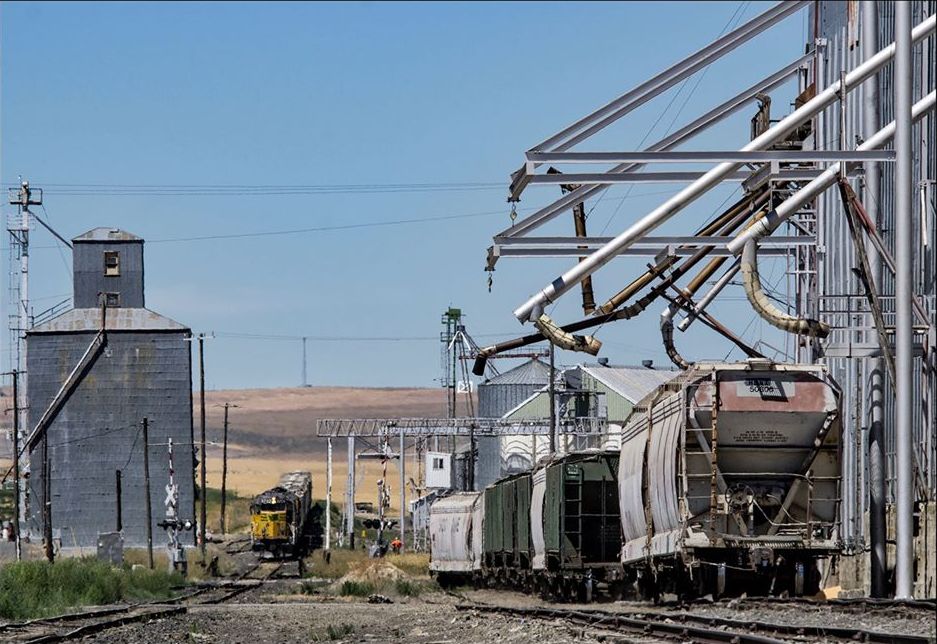