It’s been a long drive to and from the coast, and I still have a few more hours to drive – home. It’ll be near cockcrow by the time I find my lonely pillow and my old-school analog watch with glow-in-the-dark numbers and hands shows it to be a new day by a dozen swings of the big one. I’ve driven several hundred miles at this point when – doing some unposted speed limit on deserted SR28 East – I eek out the outline of a stack train hanging on the west side of Trinidad just as the underpass and its truss flash in my beam. Some quick self-talk. “God I’m tired! Do I really want to do this?” No matter, I think to myself. “Make it happen, Simon!” Ok. East or westbound? First left: Baird Springs Road. Damn! DPU. Uey. West on 28 where, in less than a mile, right. Out and up onto the massive mound of WSDOT road sand in near darkness, gear in hand, in seconds, frame, focus. Scanner: “Seattle East, BNSF [can’t remember the unit number] you can come on down into Wenatchee and tie it down.” Doesn’t take the hogger long to copy and let the mostly empty stacks push him downhill checking his speed with whining DB, winding, downgrade, slipping into the dark to where the railhead is all but water level with dammed Lake Wanapum. There above the right horizon electricity as light from the dam at Voltage refracts in the looming murk and opposite where Wenatchee illuminates its presence as a fellow nightrider streaks up 28. Scene captured. In 376 seconds it’s as if it never happened. 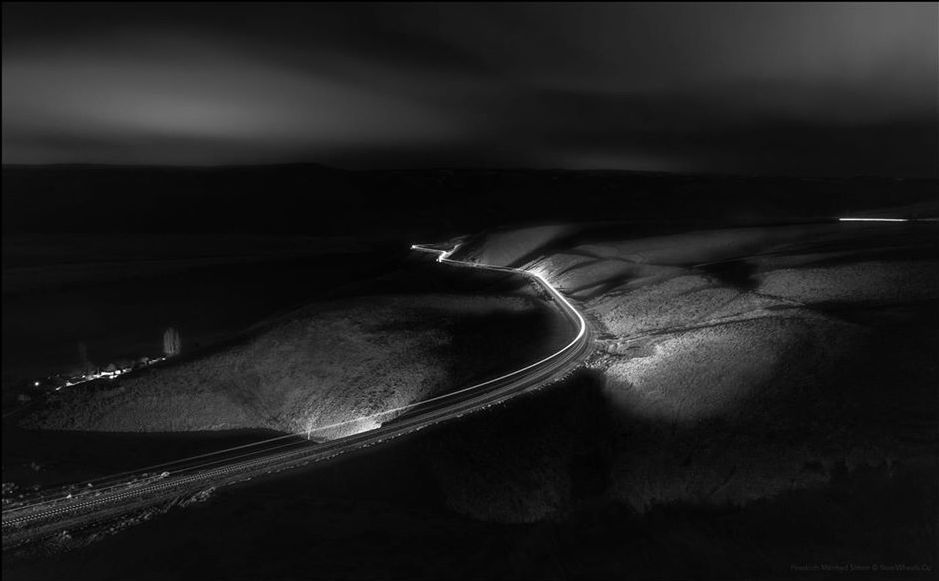